Purchases from these Sellers are generally covered under our Newegg Marketplace Guarantee.
Sold and shipped by: YU CHENG
Ships from China.
Price Alert
Add To Wish List 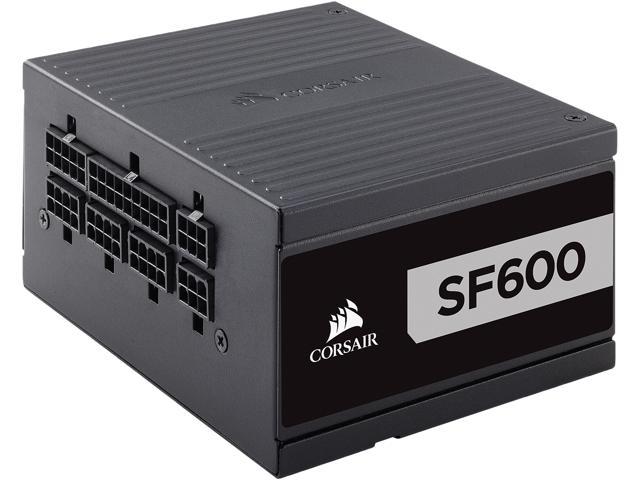 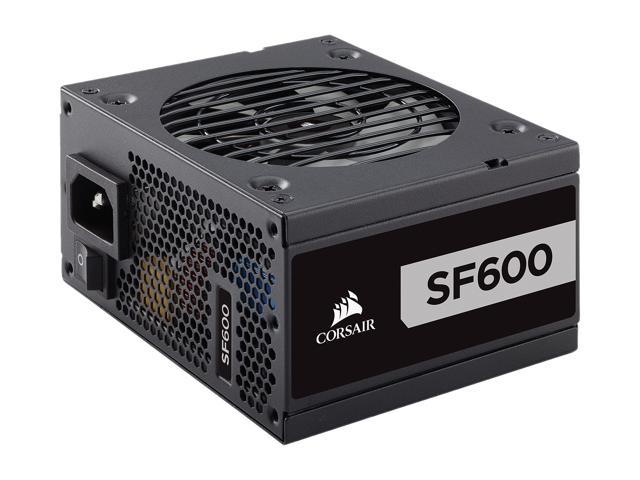 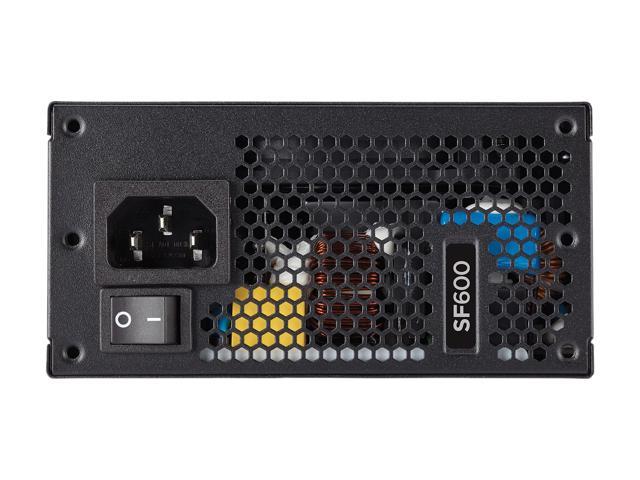 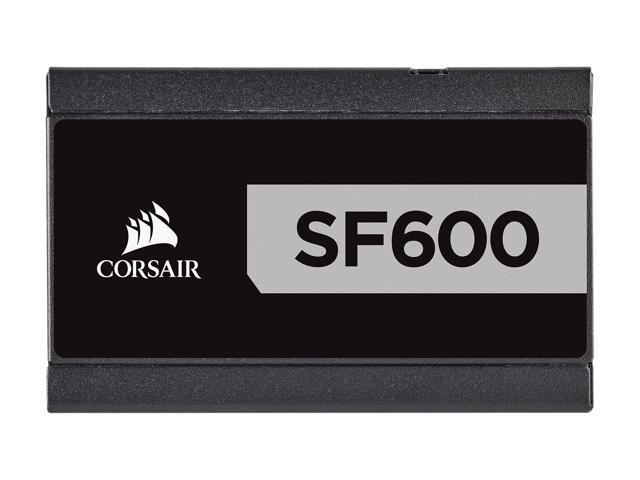 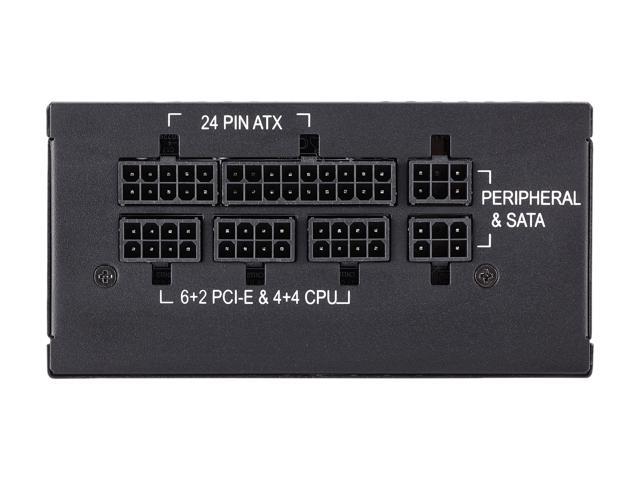 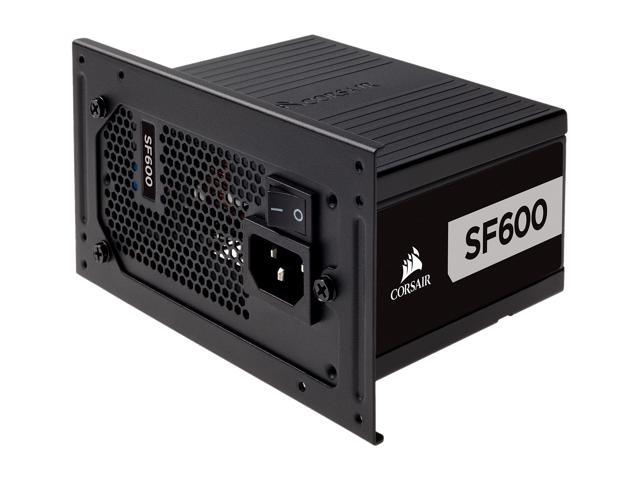 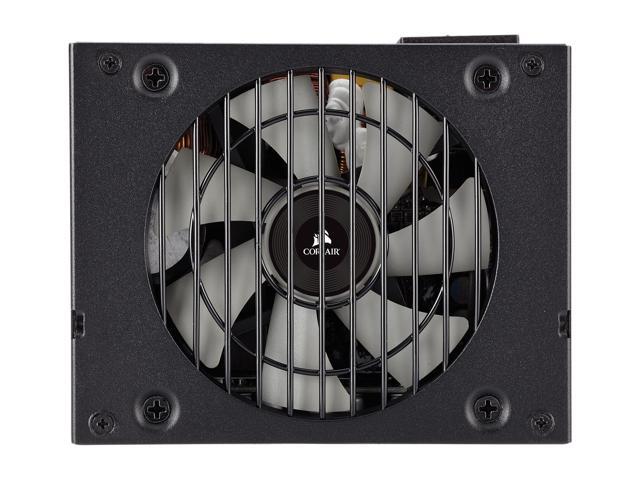 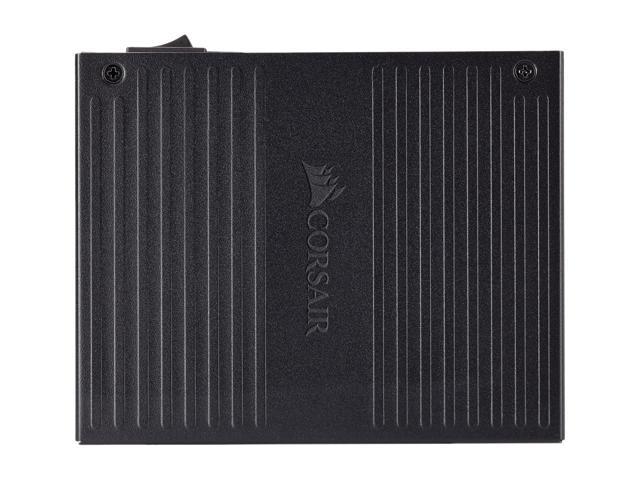 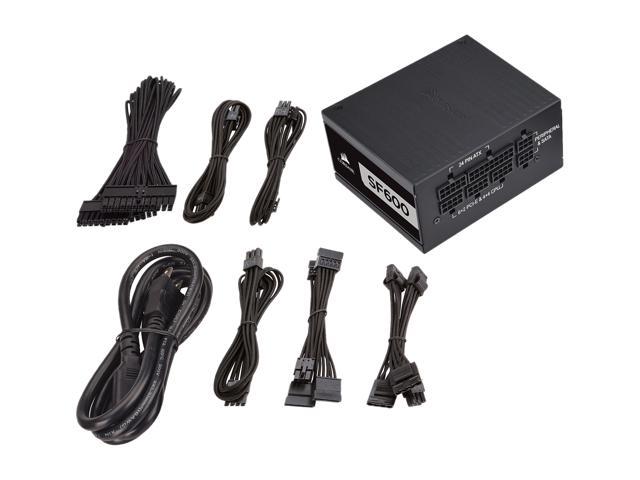 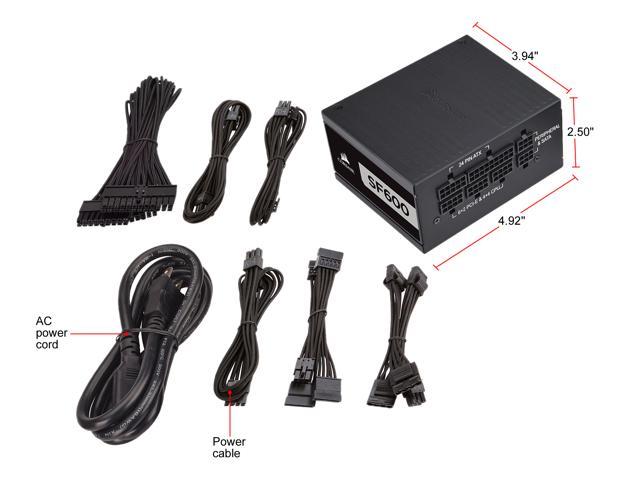 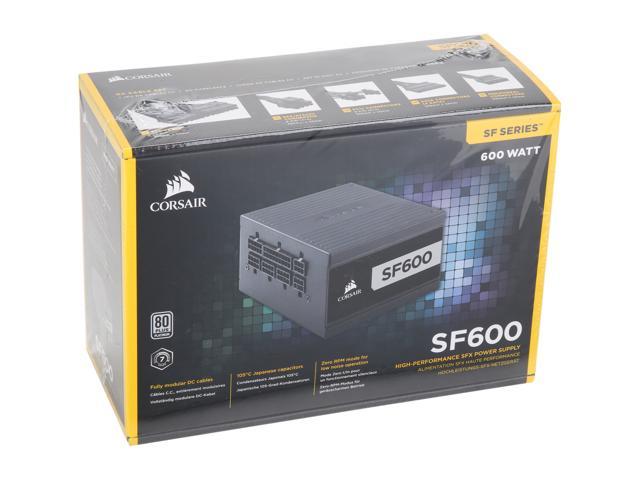 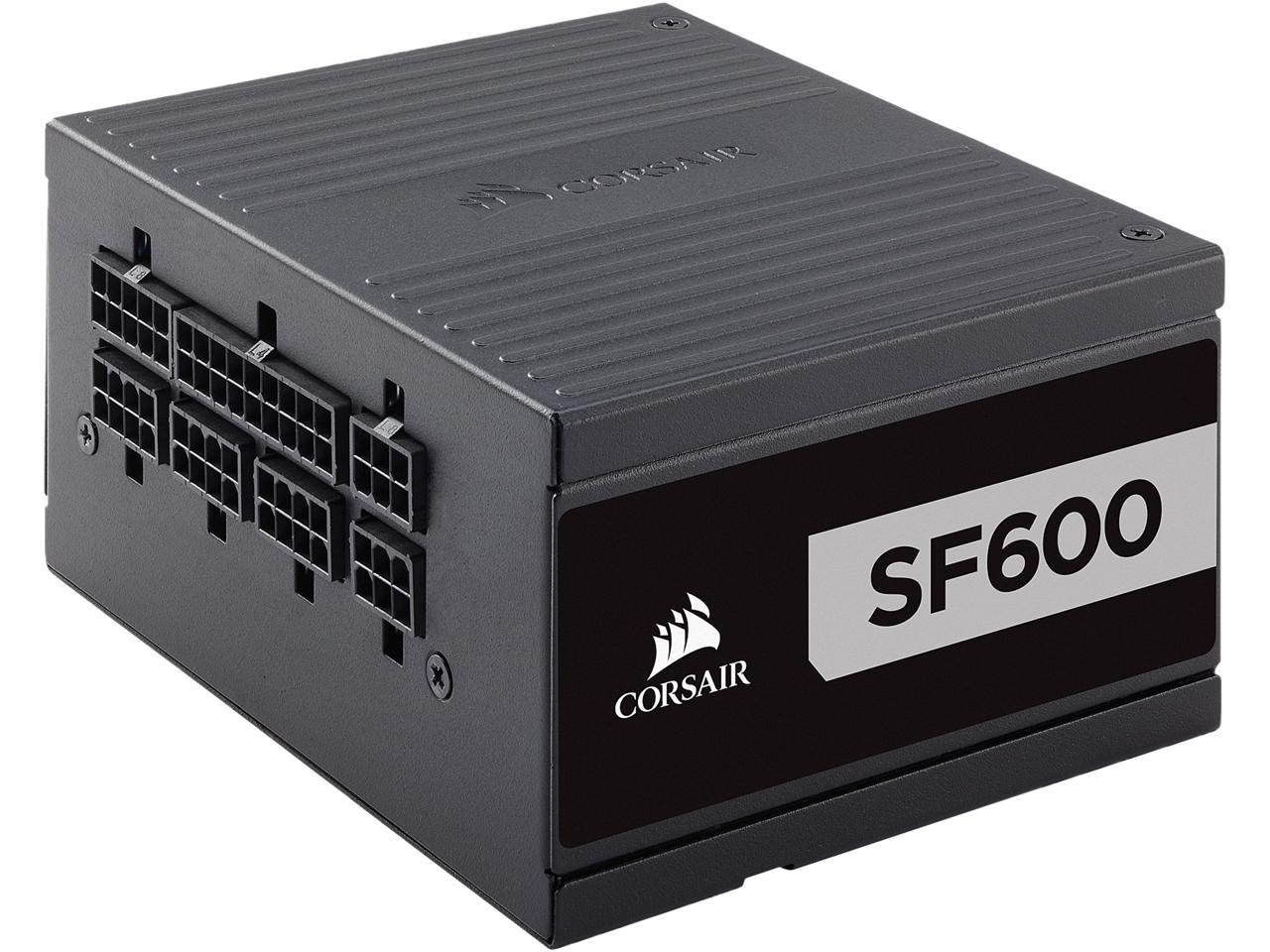 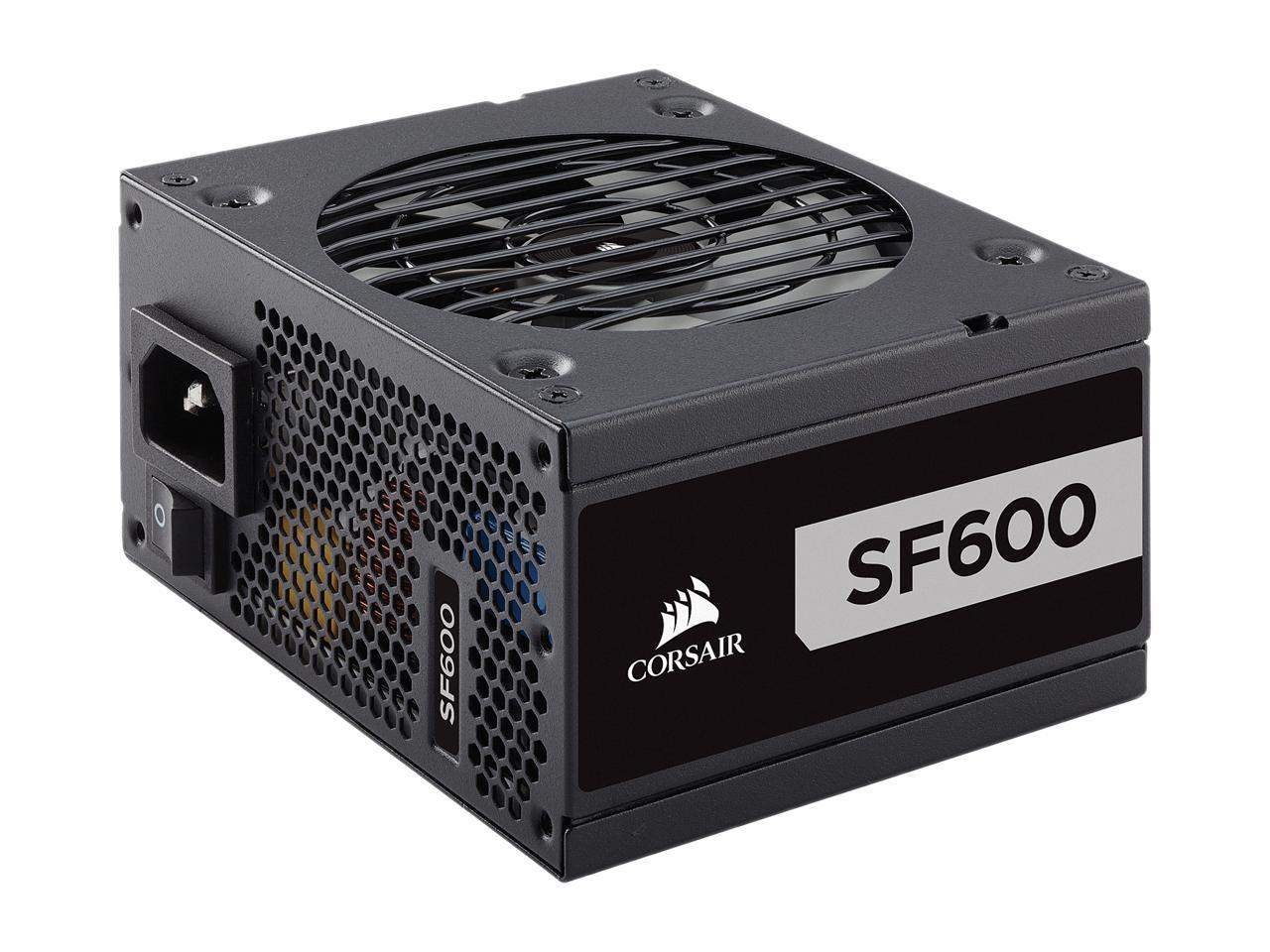 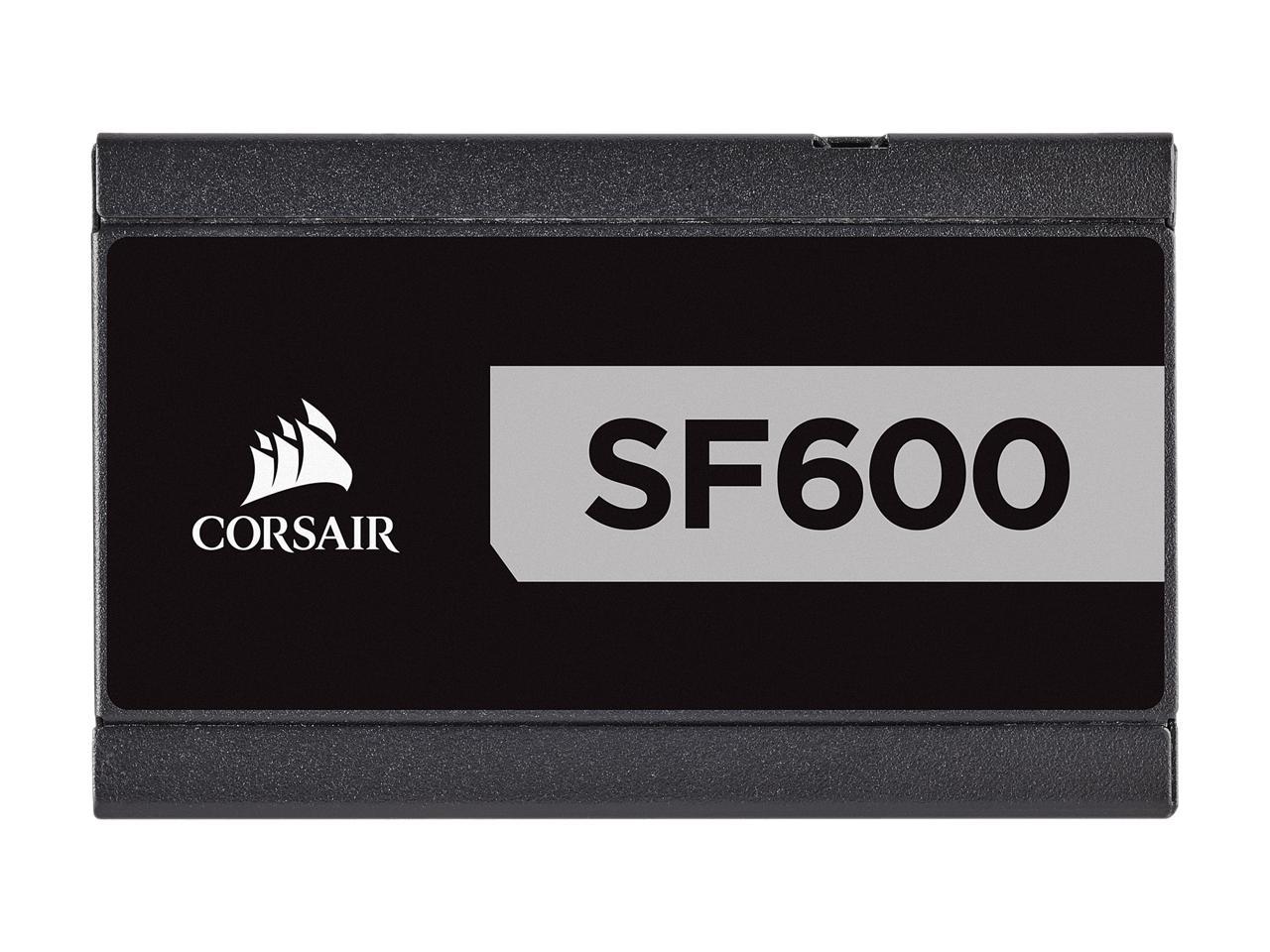 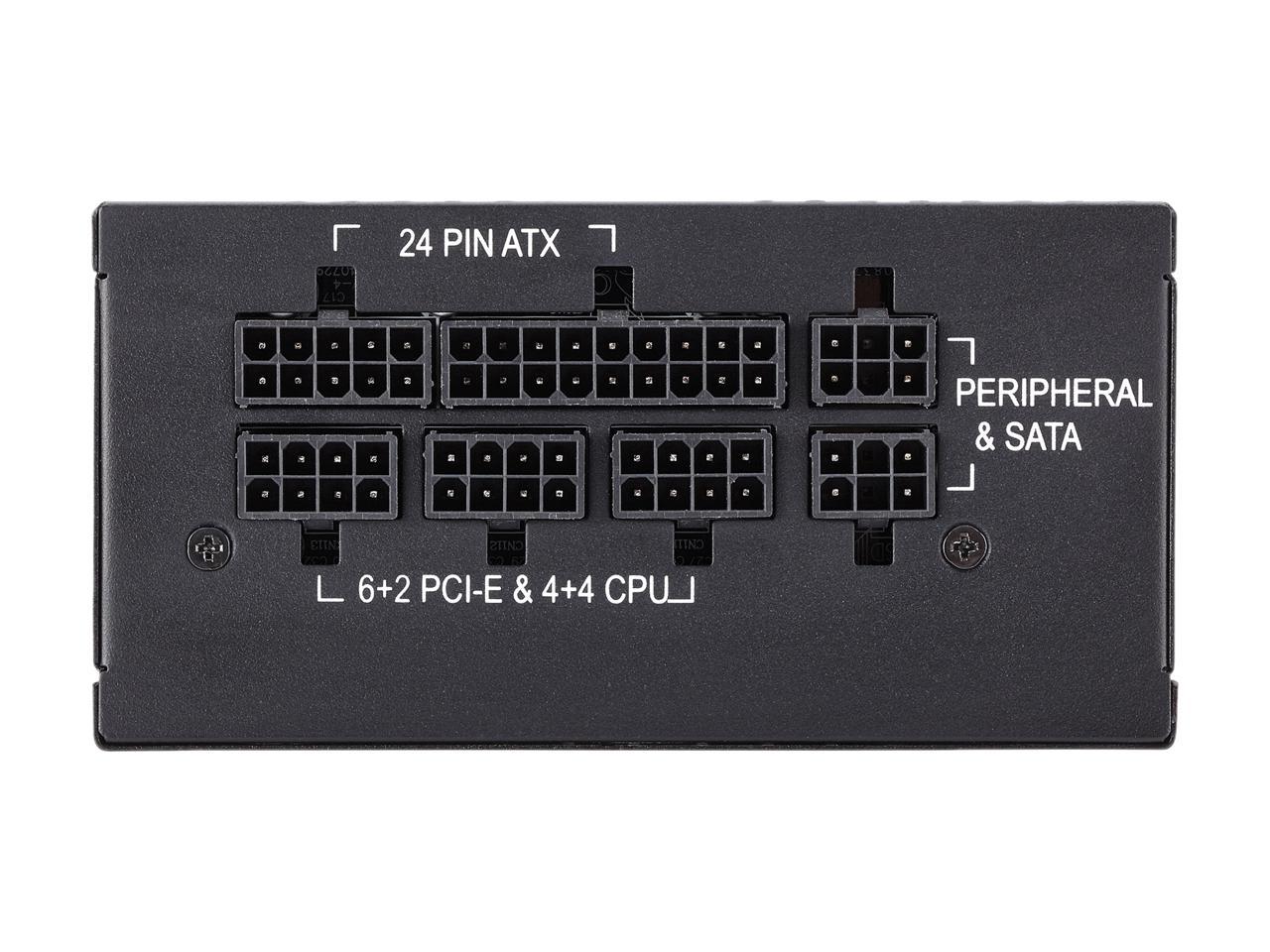 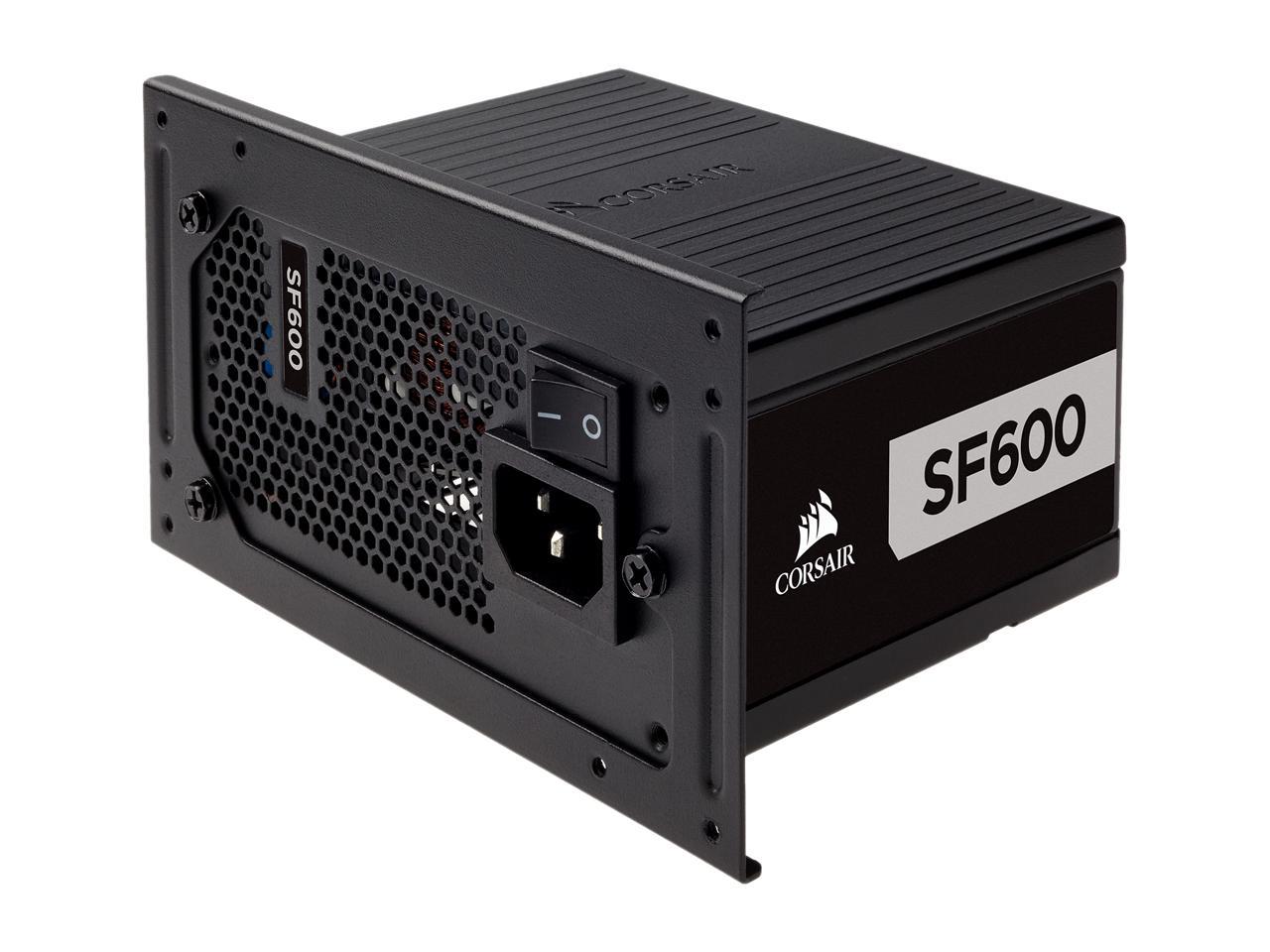 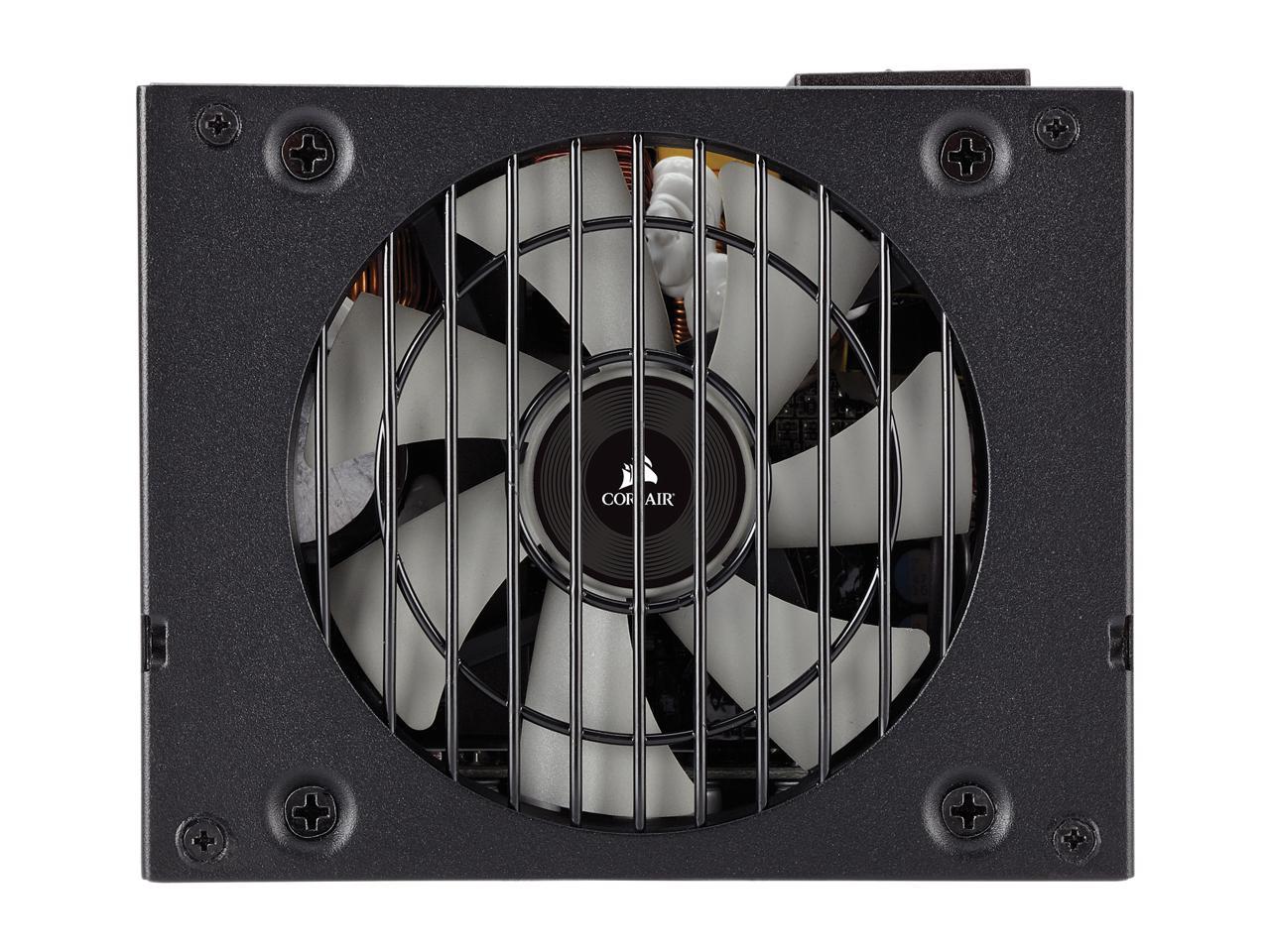 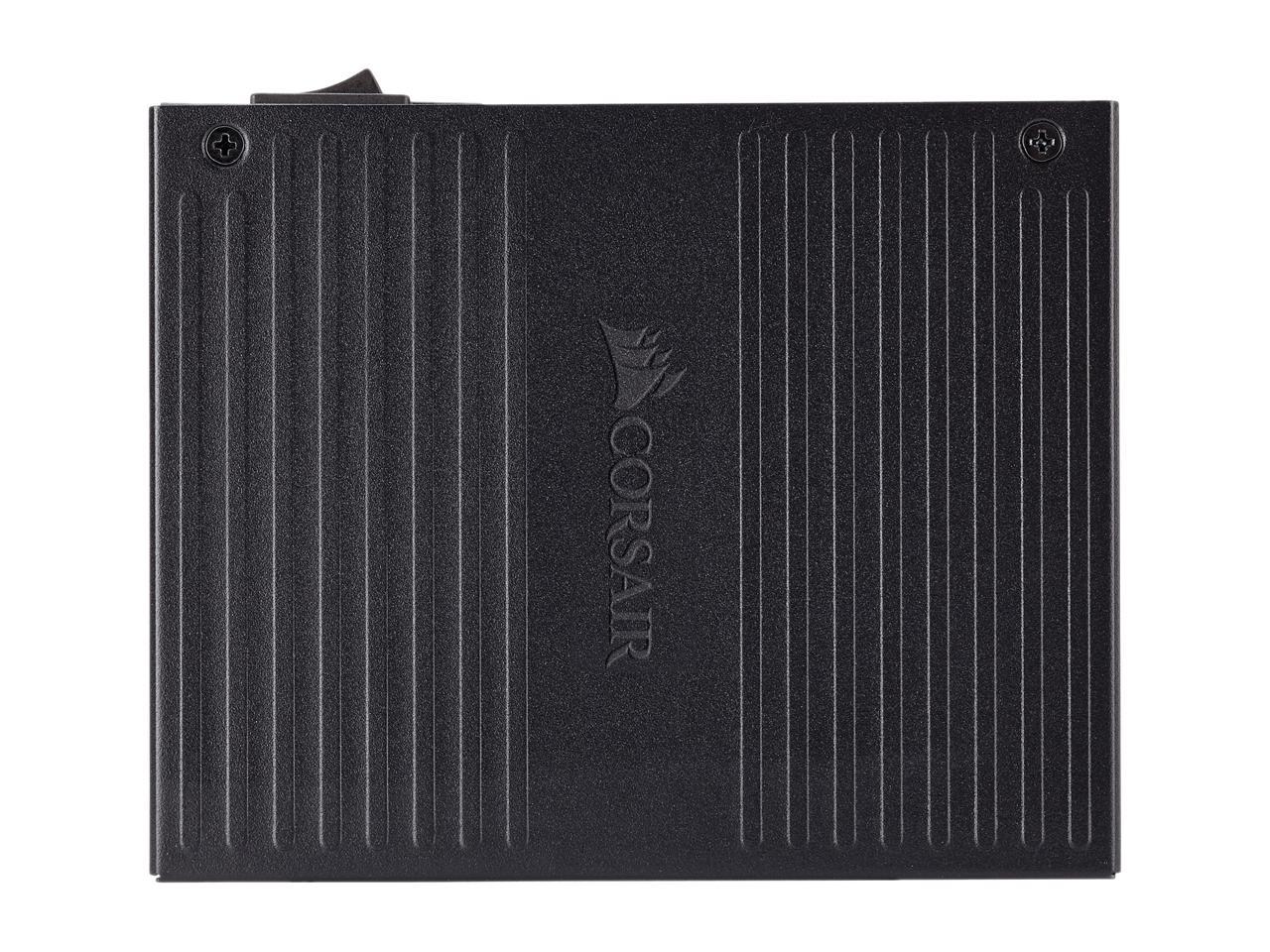 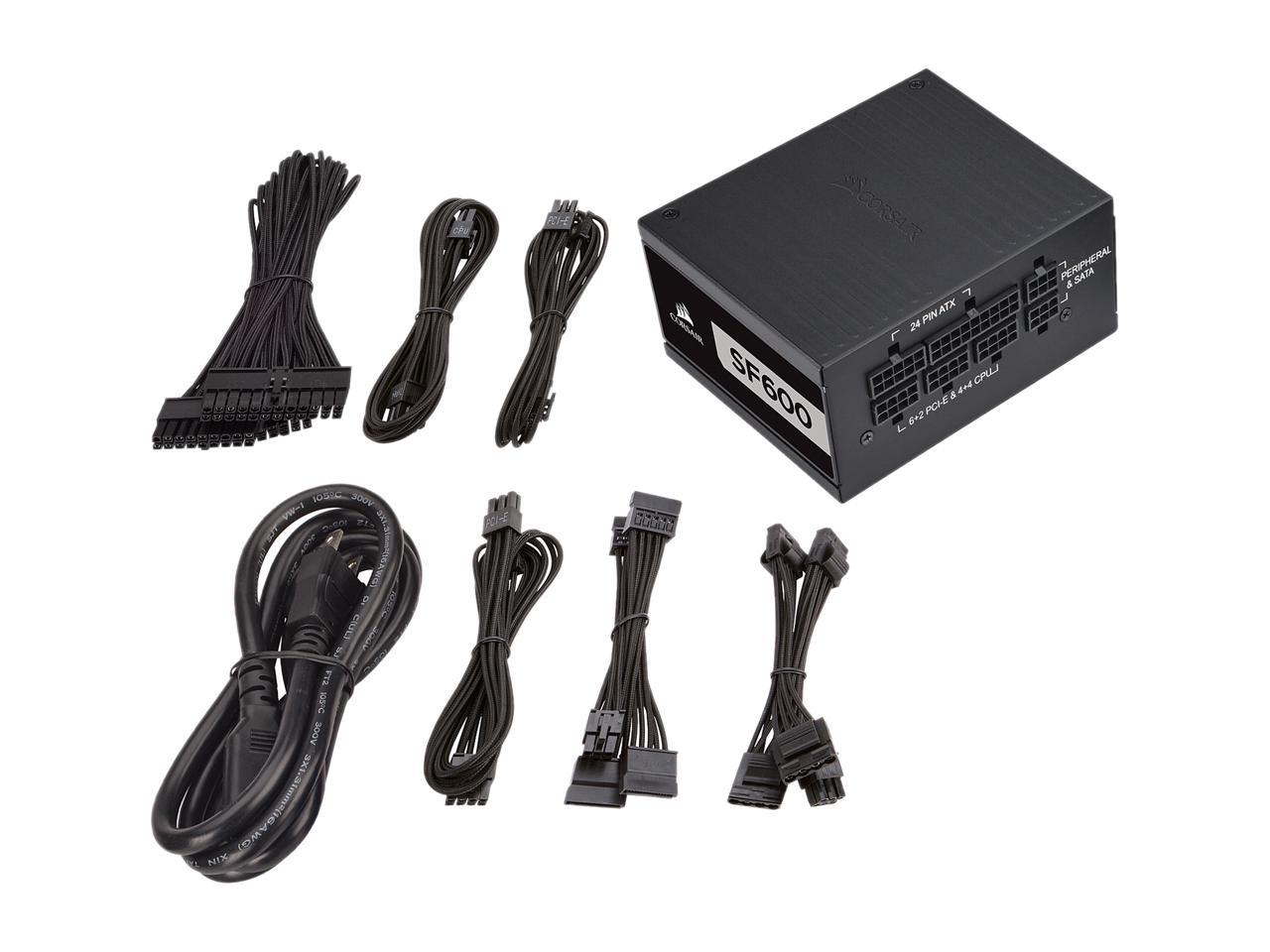 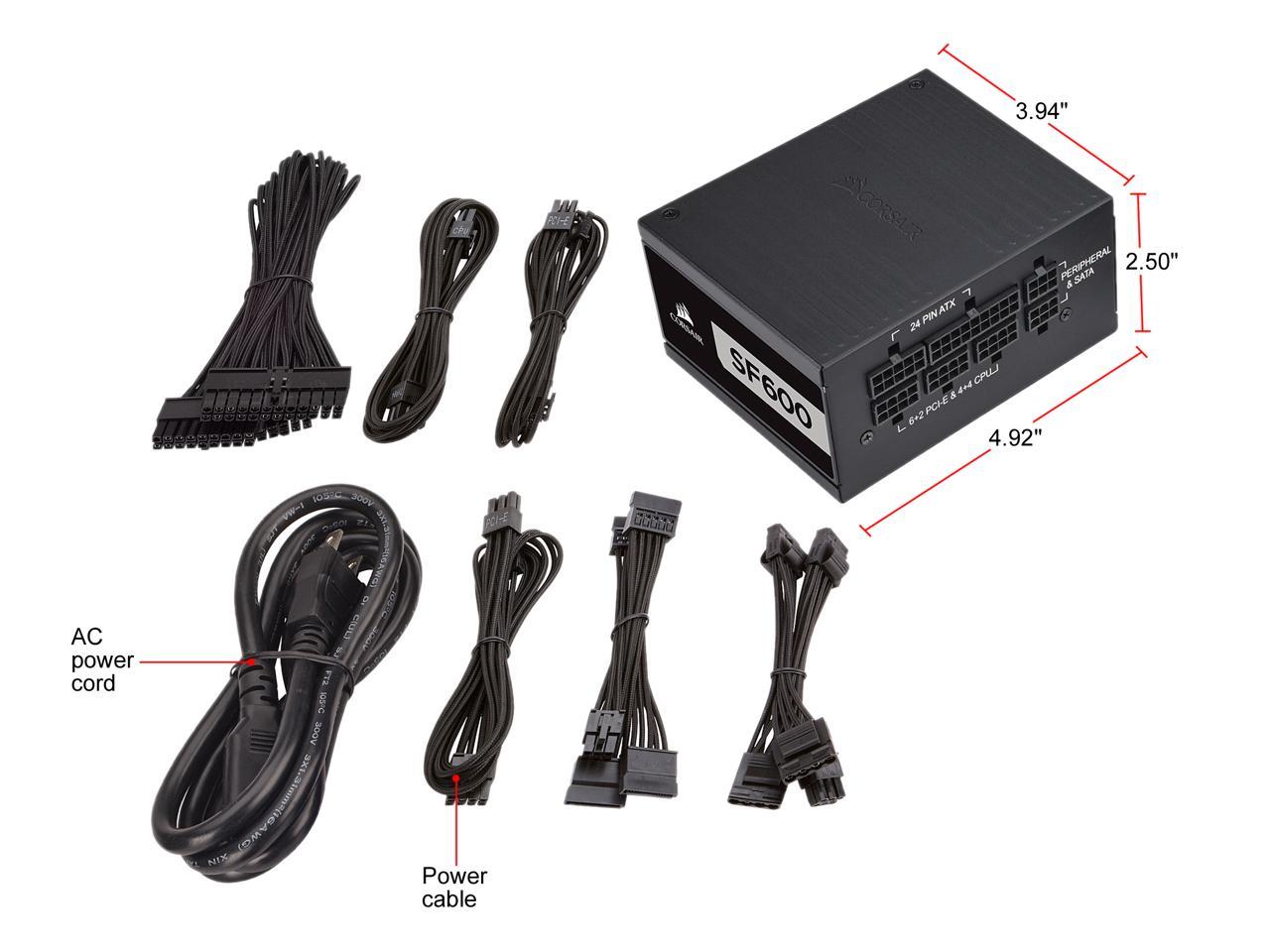 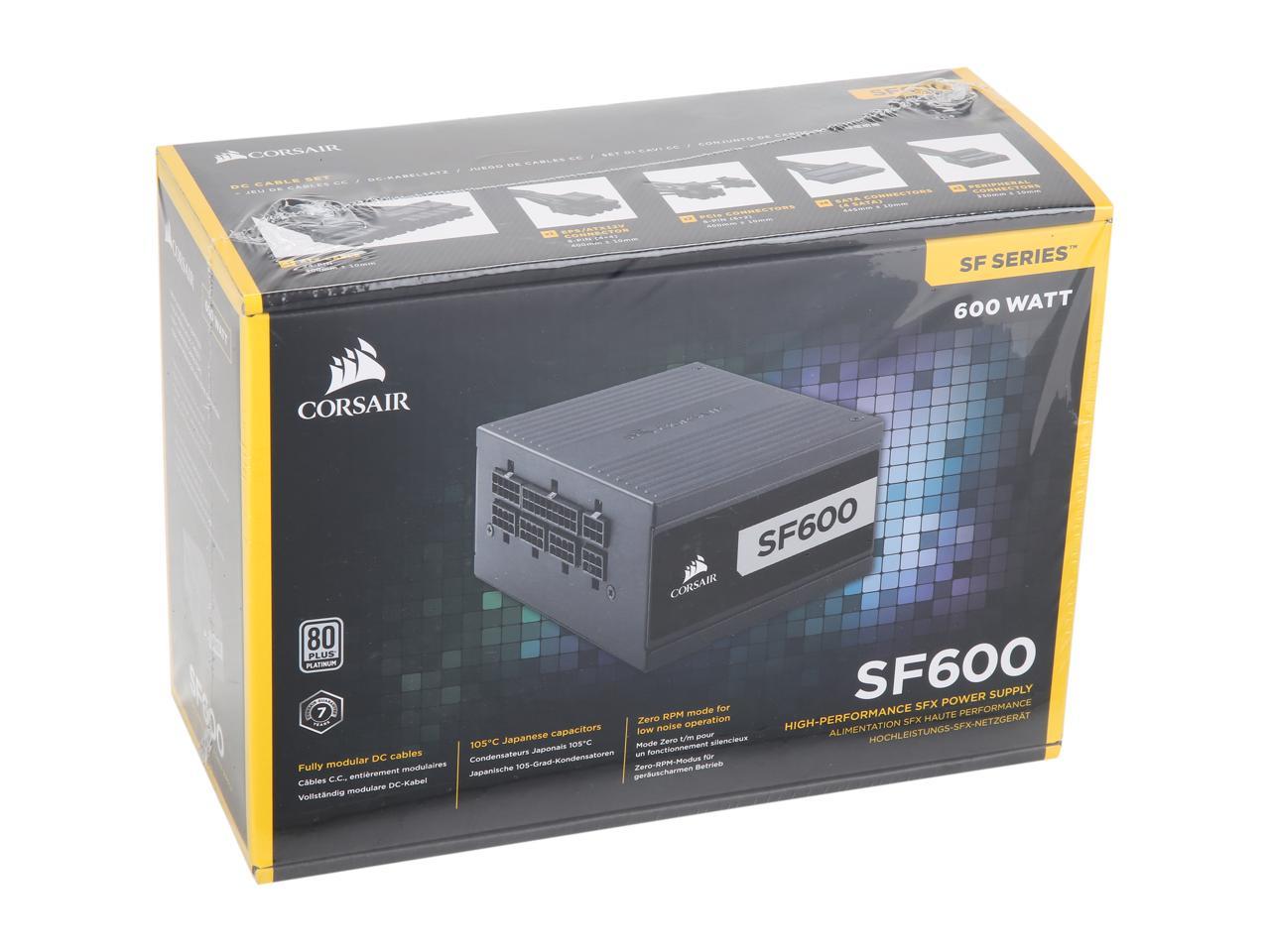 Pros: * Great passive fanless mode, especially for a SFX PSU. The fan on my gaming PC managed to stay off entirely during non-gaming loads. While gaming it did spin up, but was totally inaudible compared to the rest of my PC. It seemed about the same as other ATX PSU's I've used in the past, which is saying a lot considering how small the SF600 is. If you value noise, it's a great option. * Braided cables. I was totally surprised by this because I haven't seen it in a while, even on high-end PSU's. It makes perfect sense considering the SF600 was designed for small cases, the individually sleeved cables are much easier to manipulate compared to generic plastic ribbon cables. This is probably the best feature I've seen on the SF600 so far. Also, there are no in-cable capacitors (obviously). * Single 12V rail. This is becoming standard these days but it's still an important point to note. A single rail ensures better stability, especially for high-wattage components like GPUs. Some PSUs come with a switch to toggle between single/multiple rails, but the SF600 does not have this switch. * High quality, custom fan from Corsair. Probably rare praise for a PSU, but Corsair has opted to include one of their own fans and not some generic mass-produced fan from some random company with the lowest bid. The fan used in the SF600 Platinum is the 92mm Rifle bearing NR092L. Also worth pointing out the quality of the bearing itself, something significantly better than a ball bearing we usually see on components like this.

Cons: * 6+2 PCI-E cables are single-connector. There are two separate 6+2 cables included, each cable has 1 connector on it, as opposed to the 2 separate connectors that most typical PSUs have. This means for video cards with two 6 or 6+2 connectors you will need to run two separate cables. I should point out that, in general, you are supposed to use a single cable for each connector -- even if the PSU has a double connectors. For stability reasons, this is a smart choice. For cable management, this is a bad choice. It also limits your options as a PC builder. * Only includes a 4+4 Pin CPU power & other cable limitations on the PSU itself. The SF600 isn't compatible with 8+4 motherboards, which make up a lot of high-end motherboards these days. There are 3 total plugs on the PSU for these cables, even if you could connect an extra power cable, you would be limited to a single 6+2 PCI-E cable. If this is your intended use, contact Corsair to see if an extra cable will actually work and if they can provide one. It would have been nice if Corsair included at minimum FOUR plugs on the PSU -- two for the GPU, one for the 4+4 cable, and an extra unused connector for an optional extra cable. This is not unusual on PSUs. I won't be holding either of these criticisms against Corsair, since it's a SFX PSU and concessions have to be made due to size and capacity limitations. These details are clearly shown in the specs, so please be aware of what you're getting!

Overall Review: OEM for this unit is Great Wall, according to available info. Keep in mind the PLATINUM version is a 2018 model, not to be confused with the old GOLD model with the same model name. I'm not really a fan of releasing multiple products with the same model name, since it's needlessly confusing. This is my first and only SFX power supply, the only other units I can compare it to are standard size Gold/Platinum units of similar quality. From my own experimentation and research, it seems like the SF600 Platinum can be called the single best SFX power supply on the market without hesitation. That is no small feat.

5 out of 5 people found this review helpful. Did you?
Mark E.

Overall Review: Keep in mind there is also a Gold Rated one with the same exact name. Be sure you are buying the correct version.

2 out of 2 people found this review helpful. Did you?
David S.

Pros: I installed this power supply in my home server running Windows Servers Essential 2016. It’s powered with an Asus MB, AMD FX8350 and 32GB ram, 1 SSD and 2 8GB HGST drives. I replaced the 650W Earthwatts power supply with this. As the sever runs 24/7 I was hoping to quiet down the noise from the constantly running fan of the power supply. The included adapter allowed me to do a direct swap of the power supplies even though the SF600 is designed for SFX systems, it fit perfectly in my MATX case. Installing was a bit of a chore as the included cables were shorter that the replaced power supply. I had to move 2 hard drives to the bottom of the case so the power cables could reach. I probably could have purchased some extensions to keep everything the same, but in the end everything got connected. Silent, silent, silent! With the server running I was amazed and the quiet running. The power supply fan wasn’t even turning and only some internal noise of the hard drives could be heard. Excellent! This is something I’ve been wanting to do for a long time and glad I did it. I did measure the 12V and 5V levels through one of the molex connectors. The 12V was 12.06VDC on pin 1 and the 5V was 5.03VDC on pin 4.

Cons: Short cables if you want to use the power supply in a non-SFX case

Overall Review: If you are looking for reducing or eliminating noise from your computer and 600W is enough power then this is your ticket. Very impressive build quality. I like it.

2 out of 2 people found this review helpful. Did you?
Sean R.

Cons: - None with the PSU, but the paint on the SFX-to-ATX bracket chipped off very easily when a screw was inserted into it

Overall Review: - When the motherboard powers on, the PSU makes a clicking sound; doesn't seem to affect anything, but initially was concerning - Handles a RX 580 and i5-7400 CPU both at full-load at the same time without problem - Can be used in a regular ATX case with the included SFX-to-ATX bracket

1 out of 1 people found this review helpful. Did you?
Edwin P.

Pros: Cables are individually sleeved 50 amps on the single 12v rail. Crazy power for this small of a package. Two 8 pin GPU cables in a SFF. That's crazy town.+ GPU power cable is 6+2, and the +2 are not bundled together with the other 6 wires like most PSU's. If you don't need the extra two, they can be hidden elsewhere in the case for a cleaner look Solid feel + 7 year warranty proves the device's quality Voltages almost perfect under zero load.

Cons: Only one sata cable. If you have two sata devices that are not relatively close, then you'll either need to purchase a second cable, or a molex to sata adapter. I think a smarter move would have been to make one of the connectors on the molex cable a sata connector instead. Is anyone in this day and age really have three molex devices?

Overall Review: Cables are shorter than normal. Make sure you really want a small form factor. Lengths below are tip of the connector to tip of connector rounded to nearest inch. Main 24 pin = 13" 8 pin cpu = 17" 6+2 pin GPU = 17" (qty 2) Sata = 19" with 4 connectors Molex = 14" with 3 connectors Also comes with 3 velcro ties, 10 plastic zip ties, a black velvet bag, plus the ATX case adapter. For my money, this is THE premium SFF PSU. If you want to cram big GPU muscle into a small case, this is your PSU. If you have a standard sized case but you want to use this, it not a terrible option either, but you may need some longer cables.

4 out of 5 people found this review helpful. Did you?
Dustin H.

Cons: While it comes with an adapter to use in a full size case, I was unable to use it in my antec 300 due to how short all the cables were. I couldn't reach my sata or cpu power cables to where they needed to go (even taking direct paths, not using cable management).

Overall Review: I tested this on my antec 300 by leaving it unmounted, suspended above the MB, and it performed admirably, but had to put my old corsair PS back in due to how short the cables all are. I'd only get this if you actually had a SFF case, and I'd ignore the adapter plate for a full size case.

Pros: PSU works well, the stock cables are quite nice, and the accessories within the box are very helpful.

Cons: My specific PSU didn't come with a bag for the extra cables (even though it's supposed to be included.

Overall Review: Overall: I would for sure recommend this PSU, it's unfortunate that mine did not come with the bag, but I'm sure that's a rare case and I won't be returning the whole unit just to get a bag.

Pros: This unit is a great example of a top tier power supply. The cables are beautiful wrapped, with a nice tight Paracord that doesn't show the wiring under neath. The cables are the proper length for an ITX system. Corsair supplies two 6+2 pin PCIe cables. My system uses a NVidia Founders Edition 2080, which has a 6-pin and 8-pin power connector. Corsair has the extra "2-pin" paralleled from the PSU on on end, so it was easy to remove the +2 on one cable to help keep the system looking clean. I tested the unit on my fiance's system (which uses a sixth generation Intel i3 CPU, and a NVidia GTX 980.) The PSU exhibit ZERO coil whine, as well as stayed cool enough (and well enough under it's maximum load) that the fan didn't even need to come on, when using Unigine stress test. I'm thoroughly impressed. The fact that it's true SFX, and not SFX-L is awesome, too! The included ATX -> SFX adapter bracket is nice, but, the cables on this unit are likely too short for most ATX cases, and even some mATX cases. If your case supports a full size power supply, just get one of those.

Cons: The biggest con would be the same as all modern Corsair modular PSU's: The 24-pin. I love these cables, and would love to add cable combs to them to really polish the look. But considering Corsair uses multiple sets of parallel wires, it makes it really difficult. The 24-pin has something like 27 wires ACTUALLY connected to it on the motherboard side. I'll have to get creative with the combs. Other than that the only con would be "limited connectivity." Which is something to be expected in an ITX build so it's not a huge deal. All you get is your 24 pin, and 4+4 pin for CPU power. Which is fine. Two 6+2 pin PCIe power cables, again mostly fine for almost all builds. You then get two sets of Daisy chains, one for MOLEX, one for SATA. It'd be nice to see maybe two sets of SATA and MOLEX (one set being the four or five daisy chain, one set being maybe just two in a daisy chain of each) for the rare instances you have two SATA drives very far apart, or since almost nobody uses MOLEX for anything but a water pump and/or light controller anymore.