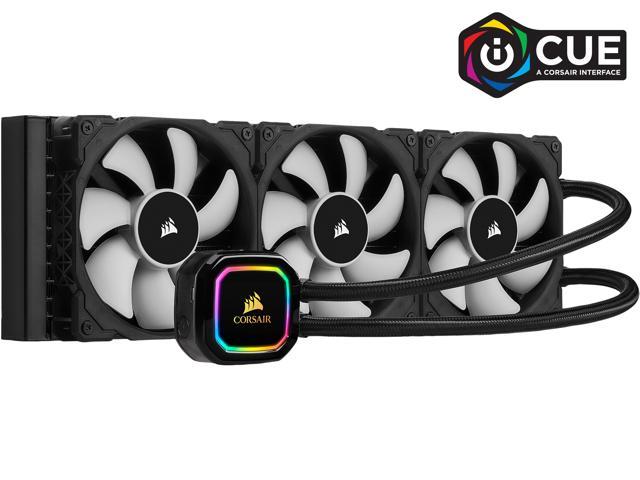 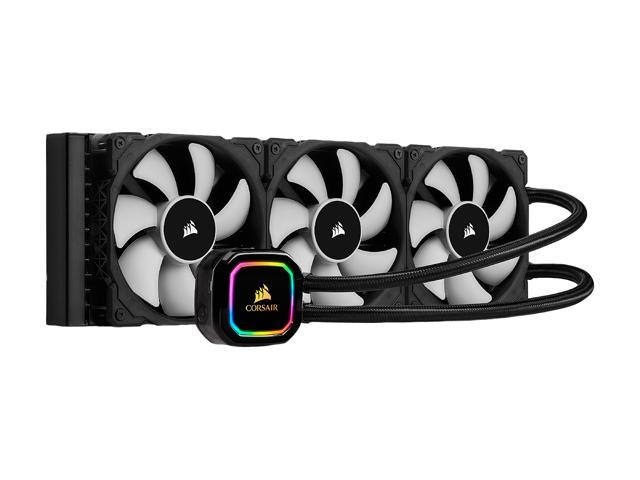 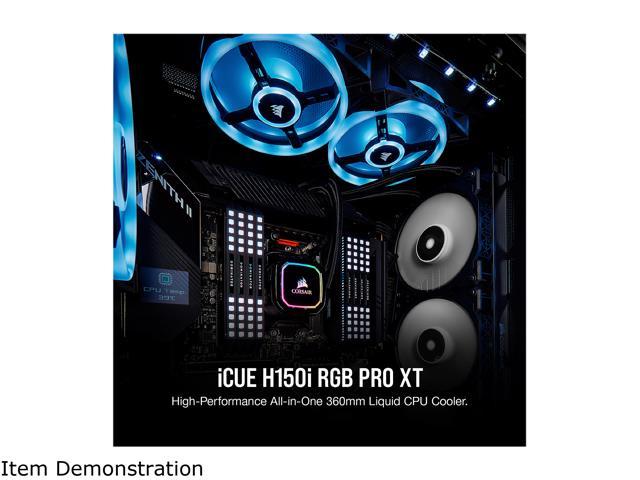 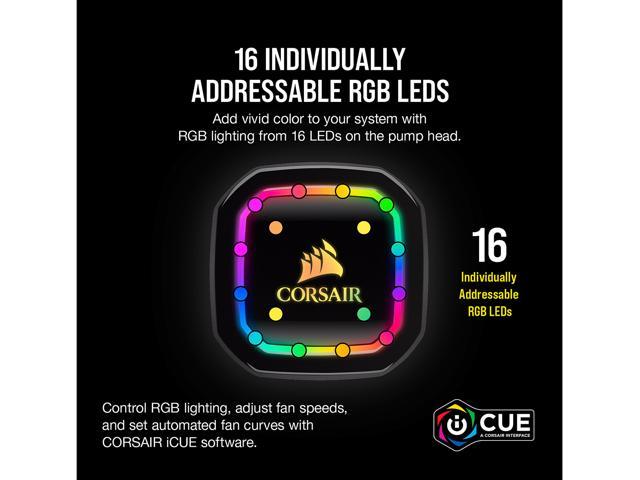 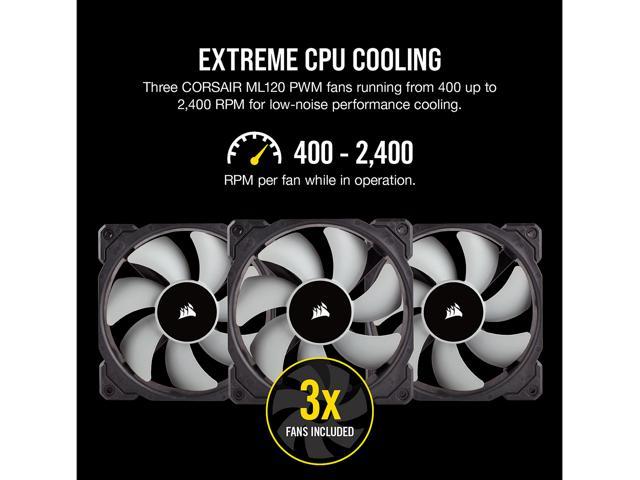 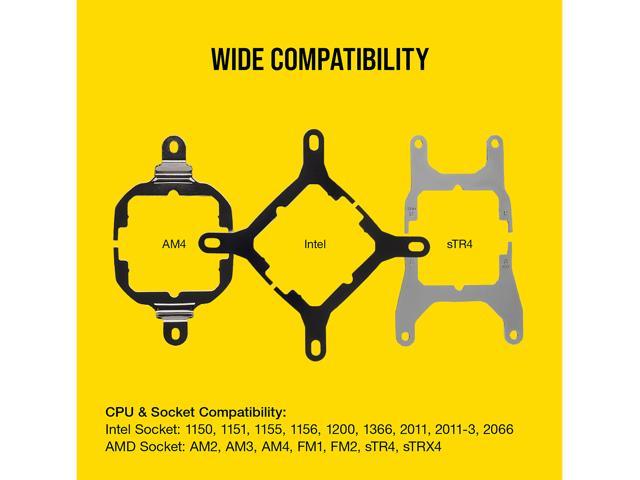 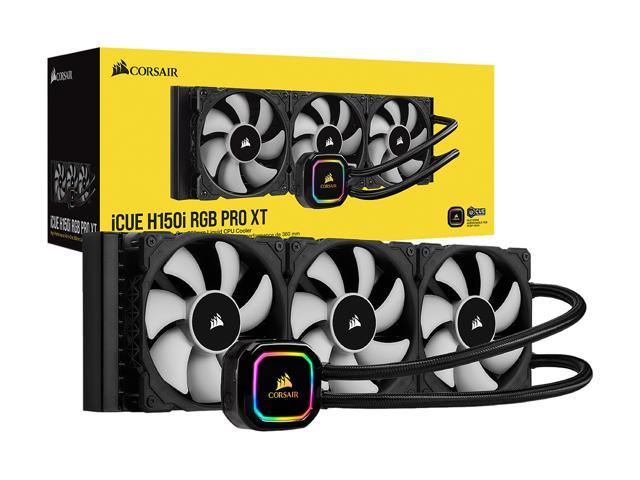 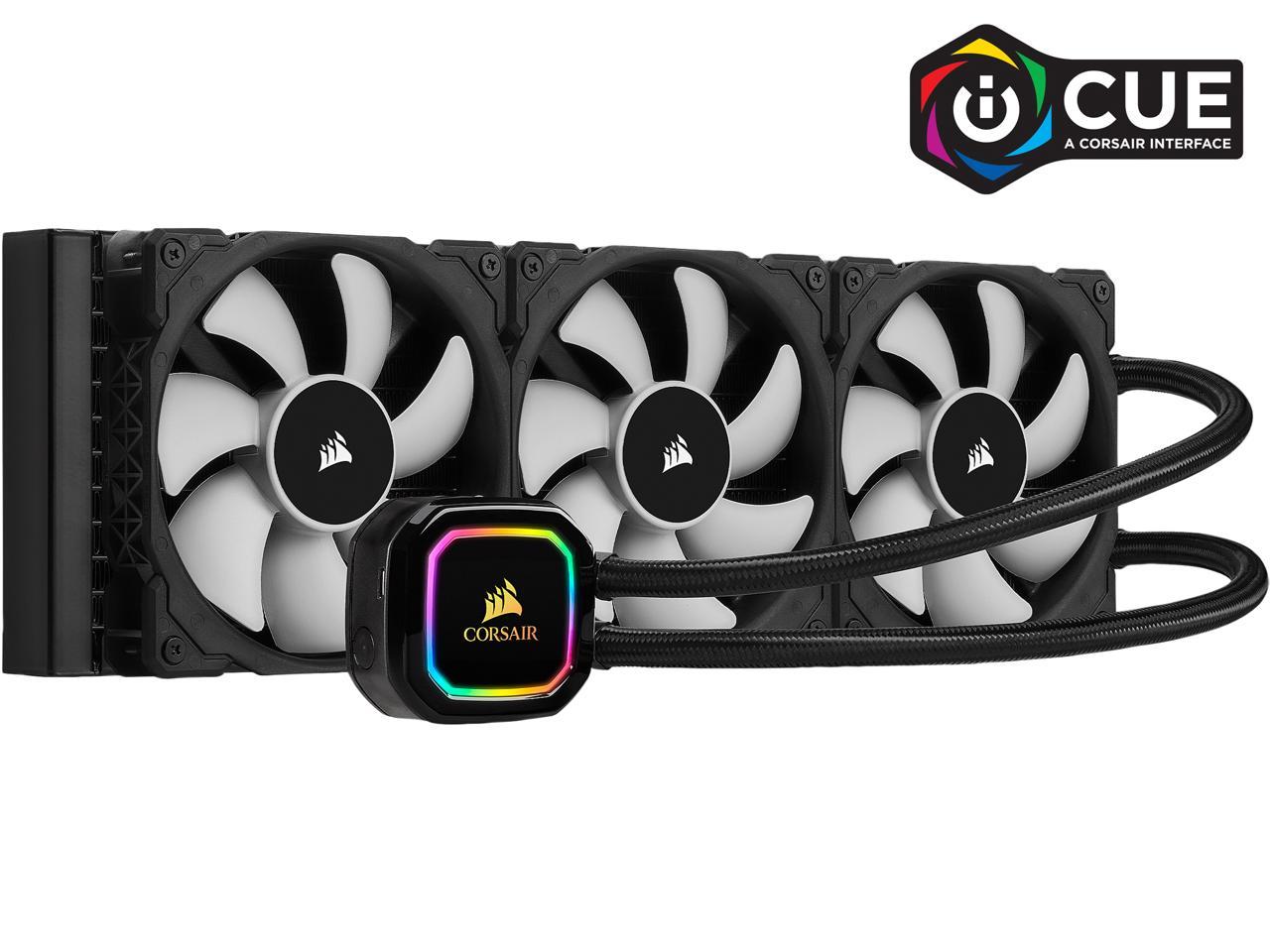 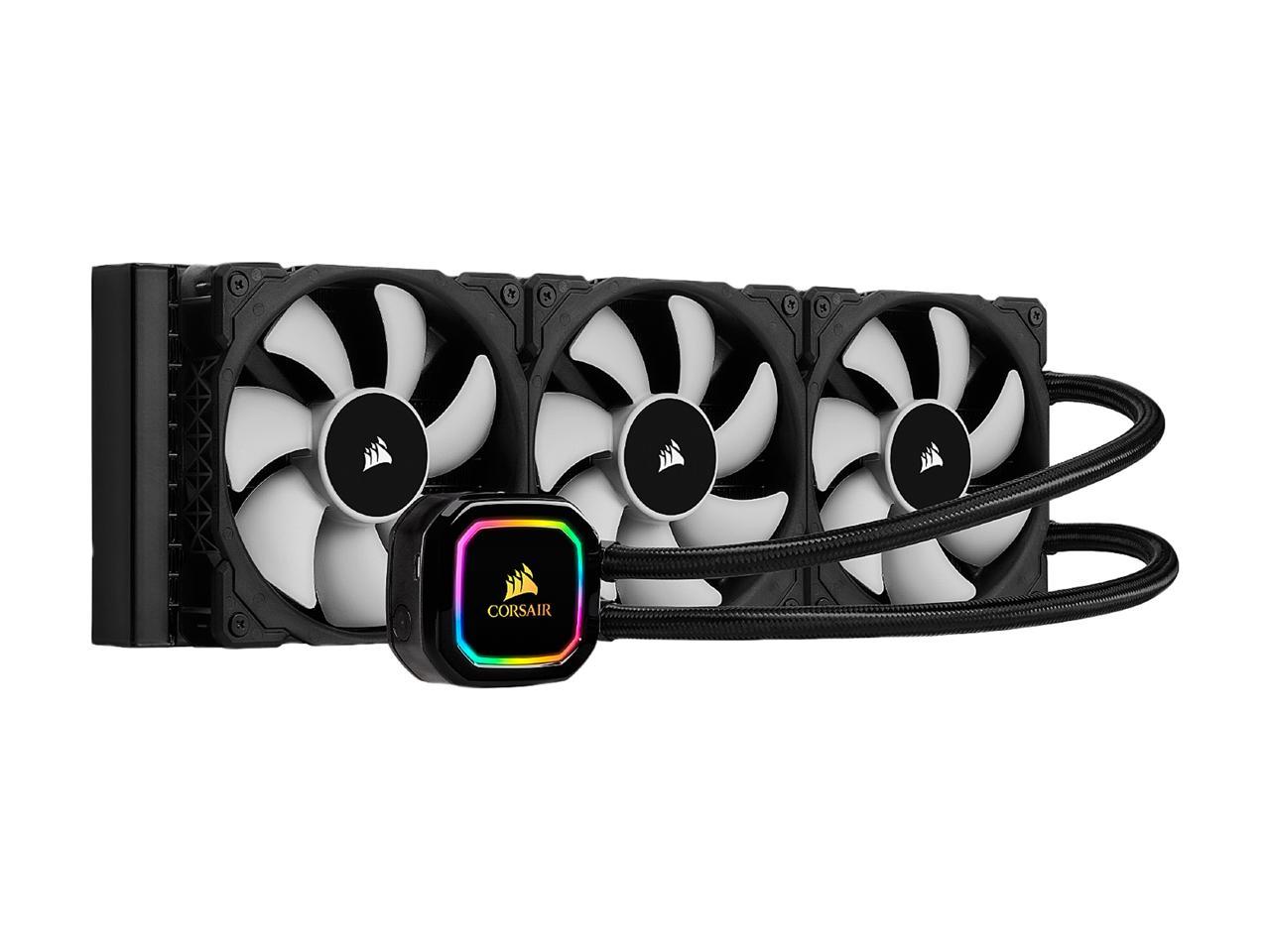 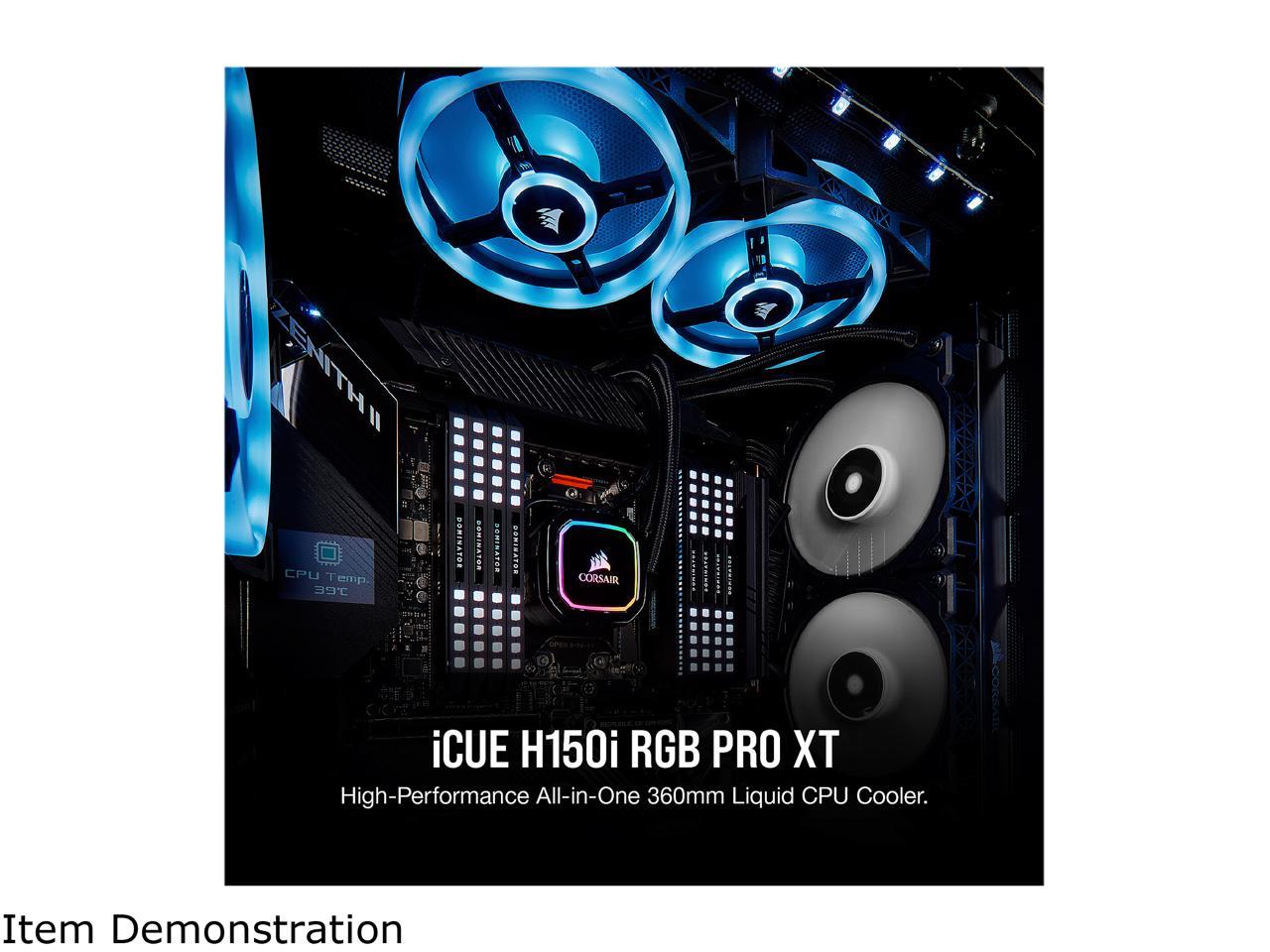 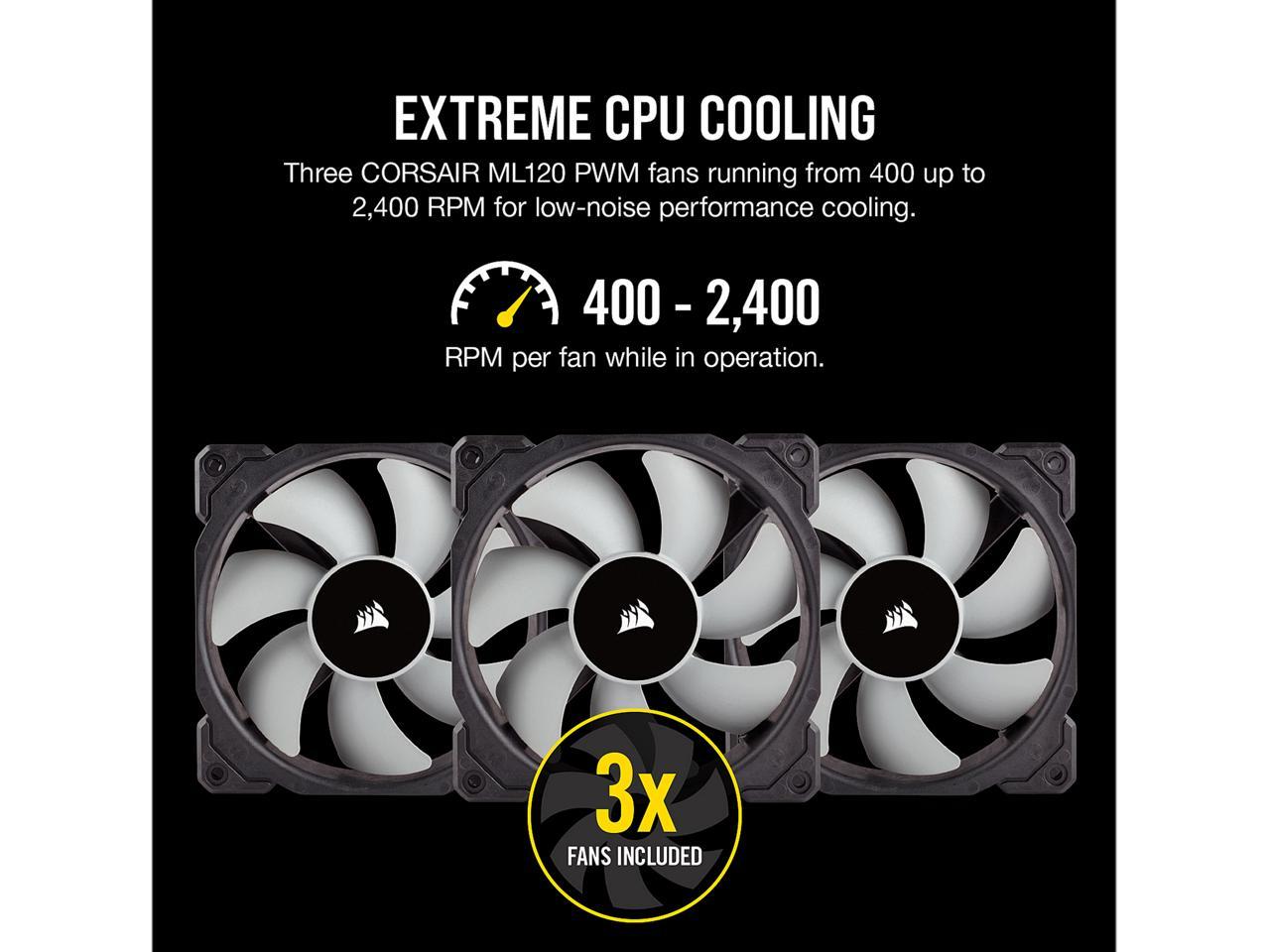 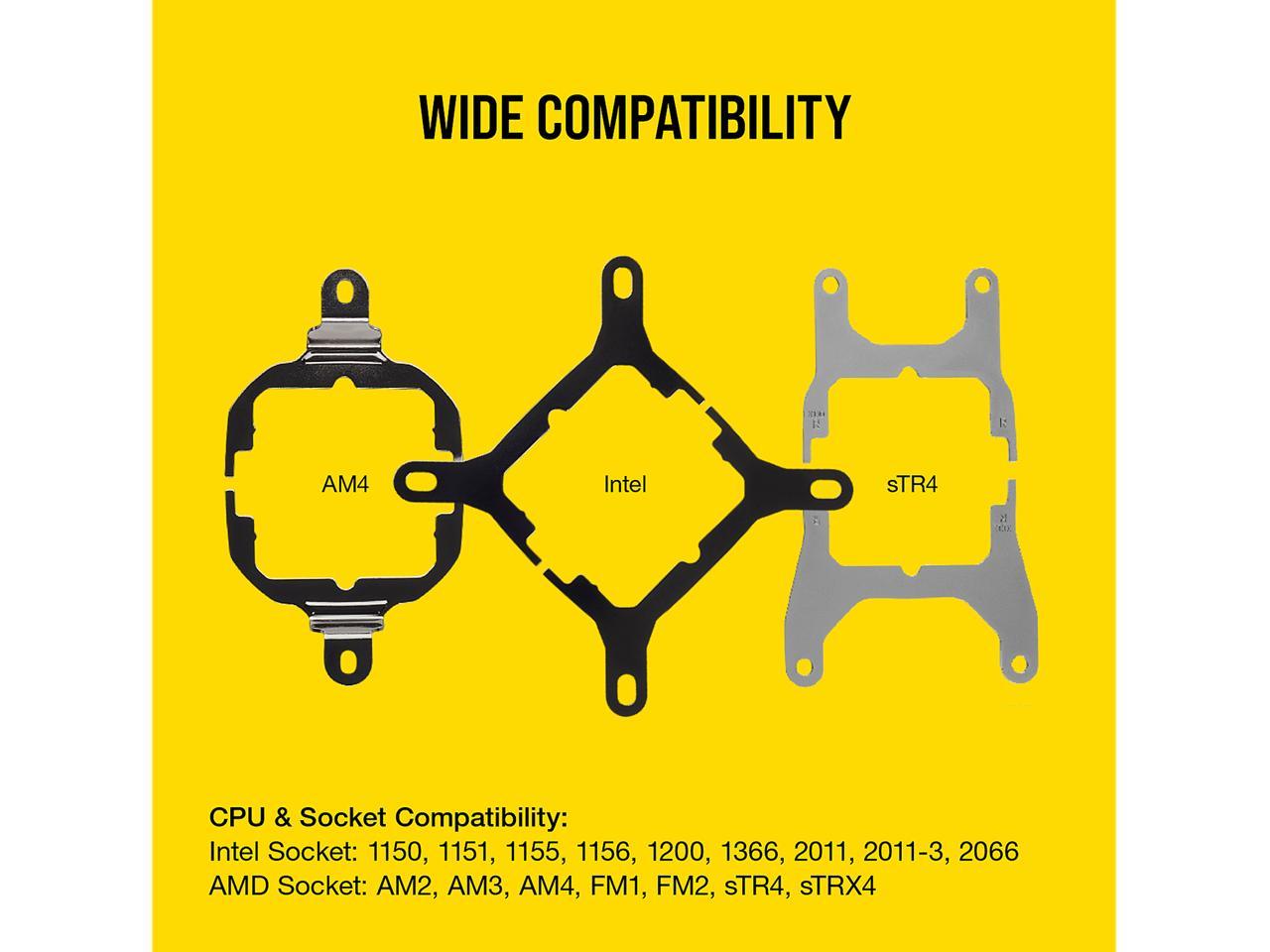 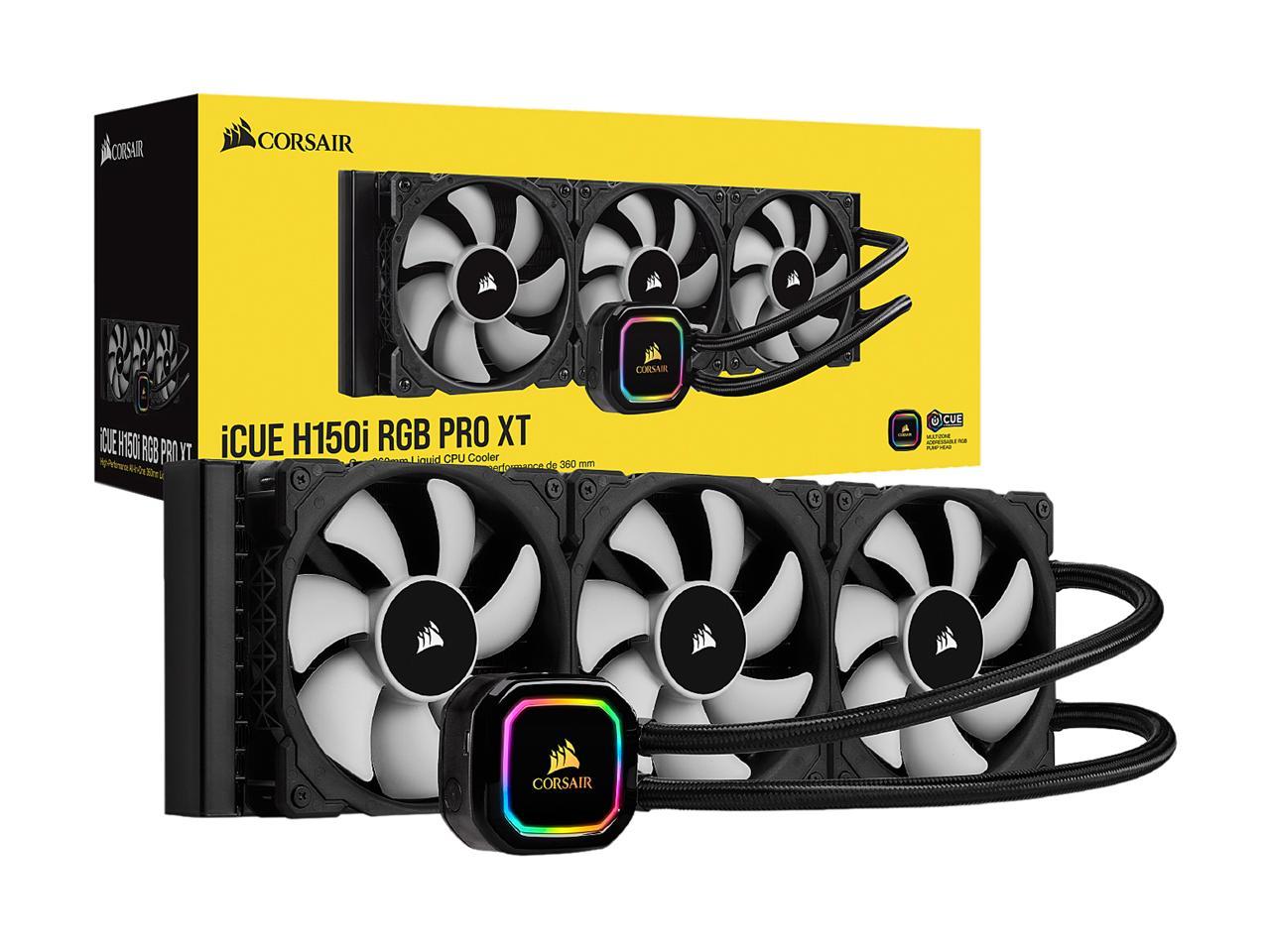 Pros: + Dropped average CPU temps by ~7 degrees Celsius vs my previous aftermarket air cooler + Fans move impressive amount of air, GPU temps down too + Pipes are flexible, can be bent or twisted as needed to some extent + Comes with enough fan screws to do push/pull config if desired + AIO has fan connectors built in, allows fans to be controlled through iCUE + iCUE software is easy to use + Fans not too loud, quieter than I expected at/near full speeds + Pump is dead silent even at full speed (for now anyways) + RBG LED pump looks really nice

Overall Review: I purchased this AIO to cool my Ryzen 7 3800X after finding my Thermaltake Riing Silent 12 was insufficient. The CPU would hang around 77C and peak as high as 86C while folding through Folding@Home over extended periods of time. I have been running folding tasks over extended periods of time for the last couple days since installing the H150i and found my CPU averaging around 70C. That's a pretty big improvement! I decided to swap Corsair's thermal paste with Arctic MX-4, so I cannot vouch for the quality of the thermal paste that came with the H150i. The highest peak CPU temperature I have seen since installing the H150i so far is 79C, and the clock speeds at which this temperature occurred were higher than under the previous cooler. Temps peak in uncommon, brief stints of less than one second, with the CPU staying around the average temp the vast majority of the time. So far, even over many hours of intensive overnight CPU load, I have not seen coolant temperatures rise above 33C, which means the H150i is managing to dissipate my CPU's heat efficiently and is very capable of cooling CPUs even more powerful and hot than a 3800X. I should also point out that my room is not very well ventilated, so ambient temperatures raise higher than what most people commonly have after some time of my PC running. Even so, the H150i still manages to keep my CPU impressively cooled over time. After looking around and educating myself about cooling methods and air flow, I decided to switch air flow from negative case pressure to positive case pressure. Corsair's Maglev fans provide both excellent air flow and static pressure, meaning that air can get across the radiator fins of the AIO very effectively to keep the liquid cool and also move a lot of air into my case to keep other components cool. Purchasing the H150i helped me improve my cooling situation in more ways than one. My GPU now also runs 5-10C cooler (depending on the load) thanks in part to these powerful fans and in part to changing my fan curves. The fans are definitely a little noisy when at or near full speed, but I cannot hear them once I put my headphones on and Discord doesn't pick them up through my mic, so it doesn't bother me! Corsair's iCUE software is a breeze to use, and so long as you use the included USB cable and keep it connected, you can change the pump preset, change fan curves if you connect fans to the AIO itself, and control the pump LEDs. I find iCUE highly intuitive, though I did have to Google some things regarding the LED controls as there are a lot of options. I almost bought an NZXT Kraken X73 but heard the software functionality and support was terrible, so I waited for this to come back in stock because I already had experience with iCUE and knew I loved it. Of course, no product is perfect and the H150i is no exception. Its biggest flaw is the manual, which is vague and left me questioning how best to do things. Fortunately, Corsair has a 1.5 minute YouTube video about installing the H150i on AM4 boards (no idea if they have an equivalent vid for Intel and sTR4) which helps clarify some of the more confusing parts of the install. Still, the pictures in the manual are barely helpful sometimes and the textual descriptions even less so. The other issues I have had with the product are minor. First, I had difficulty installing the pump over the CPU because the pipes somewhat clash with the 5.25" front bays given my radiator is installed at the front of the case. As such, there is a little more strain placed on the pipes than I would like due to how I had to twist them to get the pump installed. That said, the fittings on the H150i are clearly tight and secure and so as long as excessive force isn't placed against the pipes at all times, it likely won't be an issue. That, and most people don't purchase cases with 5.25" front bays anymore these days anyways. Secondly, cable management was difficult, and I found it hard to make the cables look good. Unfortunately, this means the power cable, fan cables and USB cable run over top my RAM to the back of the case, which is a little unsightly but not terribly so. The fan tachometer cable (which plugs into a CPU fan header) is also pretty long, so if your CPU fan header is nearby, you might find it difficult to hide the excess cable from that too. Finally, there is no manual pump control, meaning you cannot set it on a curve like you can with the fans in iCUE. There are three presets which set the pump at a static speed regardless of CPU temp or coolant temp (so far as I can tell). Overall, I would highly recommend the Corsair H150i Pro XT as the pros hugely outweigh the cons. Hopefully this AIO will last at least 5 years. If I run into any quality issues or other troubles, I will update my review to reflect them. In the meantime, I am super happy with my H150i and encourage anyone reading this to seriously consider it!

Pros: * Easy install * Supplied fans are great, they appear to be corsair ML120, lots of power * Keeps i9 10900k cooled * Contains connection to run all 3 supplied fans on one CPU fan header * The RGB looks nice. I'm not into RGB but I like it * Prevents throttling of my CPU speed, haven't went over 74c while gaming (where I have my fans set to kick in at a much noisier RPM) * Compatible with a large range of CPUs * Comes with thermal paste pre-applied * Thumb screws for the CPU heatsink portion, makes it easier to cross-tighten them

Cons: * Directions didn't include all relevant information for latest intel 10th gen processors * The cable for the micro-usb to USB 2.0 header is a bit short. Can be a tight fit

Overall Review: Overall this AIO does exactly what it's supposed to do. Keeps your cpu cool and looks stylish doing so. The fans can reach insanely high RPMs so make sure you adjust them in your bios to follow PWM and a custom curve you set. I tend to not let the fans go above 1550 RPM otherwise they make insanely loud audible noise. They've got a ton of power. My one biggest issue is that the directions don't include information for the latest intel 10th gen sockets, so basically the back-plate that goes behind the motherboard has 4 screws in each four corners. Those can all be adjusted to move higher or lower, but it doesn't look like they can (no indication that they can in the directions either) so for intel 10th gen you have to lower each screw to the lowest point it can be and then you will be able to screw the standoffs in on the other side. After that's done installation was really easy. Just wish the directions were better would've saved me a lot of time.

Pros: It worked for about 5 hours. iCue integration worked well.

Cons: Poor packaging led to bent fins on radiator. Upon installation, there was no spec for a LGA1200 board in the book. The installation instructions need to be revised and updated for Intel's newer LGA packages. The mount is compatible, but I had to find a youtube review to outline the procedure. Failed after 5 hours of moderate use. The pump suffered a catastrophic failure along with the dreaded burnt electronics smell.

Overall Review: This was my first attempt at water cooling, prior to this I was using air cooled CPU heatsink. I'm going back to this. After reading some of the other reviews Corsair needs to revise this product line. At least update the book so after waiting 2 weeks for delivery, you can know that its compatible with your processor, instead of finding a work around on youtube.

3 out of 3 people found this review helpful. Did you?
Manufacturer Response:
Hi, We're sorry to hear about the issues you encountered and appreciate your feedback. I will be sure to make note of the LGA1200 documentation. Please get in touch with us as we'd appreciate the chance to make this right: support.corsair.com -Albert
Luis B.
Ownership: 1 week to 1 month
Verified Owner
Good product!7/3/2020 11:18:50 AM

Pros: -Keeps temps down around 40c cooler than stock prism cooler. -If you can use ML fans. Tried to swap for sp120 pro RGB but the performance of the ML was worth losing some lighting over.

Cons: -Not a con that Corsair has control over but AM4 mounting can be finicky. Once you get it though it stays locked in.

Overall Review: -Would recommend as this can be controlled with Corsair iCue software, including pump and fan settings. Great for cooking and sound in general.

3 out of 3 people found this review helpful. Did you?
Anonymous
Ownership: 1 week to 1 month
Verified Owner
Impressive cooler with horrible instructions1/11/2021 1:09:41 PM

Cons: LGA1200 warning. Yes this does mount to LGA 1200, the backplate mount points move, but this is not mentioned anywhere in the documentation. Simply push on the mounting points on that backplate and it will fit on any Z490 MB.

Overall Review: I would recommend this AIO, it is fairly easy to install and the fans are quality magnetic levitation and are very quiet.

Pros: Decrease my entire pc temps from the icue 100i model which came damage.

Cons: Item came damage no leds working in the pump. And new egg will not let me replace it.

Overall Review: Awesome product i for some reason keep getting bad parts

1 out of 1 people found this review helpful. Did you?
Manufacturer Response:
Hi Deandre, Sorry to hear you received a damaged unit. Considering our Hydro AIOs carry a 5-year warranty, please get in touch with us as we'd appreciate the opportunity to make this right: support.corsair.com -Albert
Anonymous
Ownership: 1 week to 1 month
Verified Owner
Buenisimo produtos10/5/2020 9:20:35 PM

Cons: No cons I can think of.

Overall Review: Definitely would recommend as an AIO cooler. Nicely fits my Lian Li PC-011 Dynamic XL at the top.