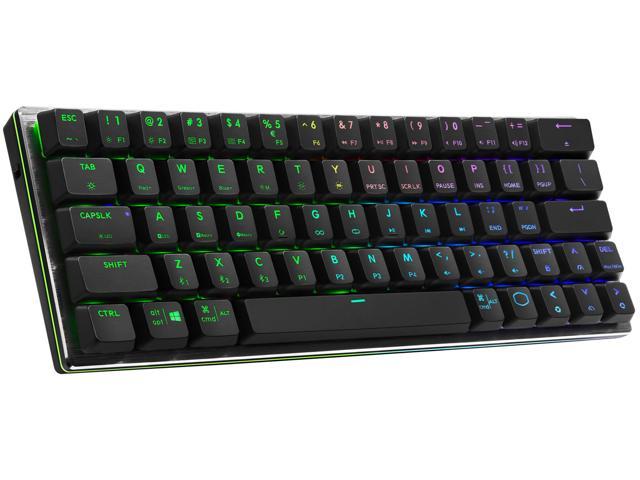 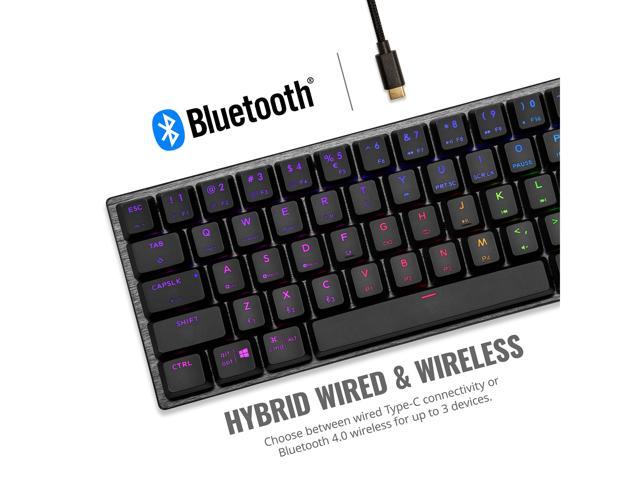 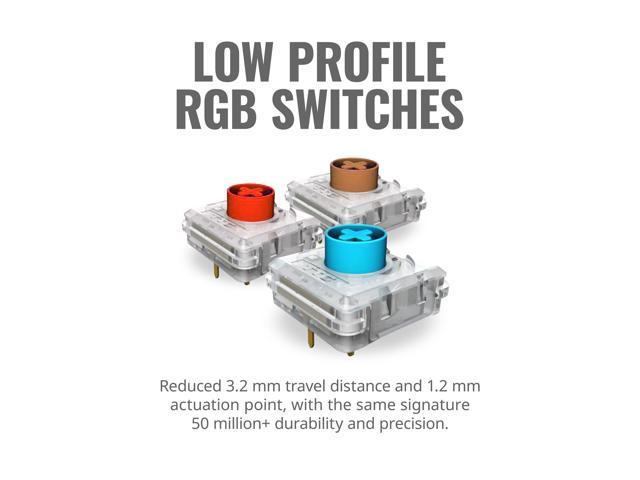 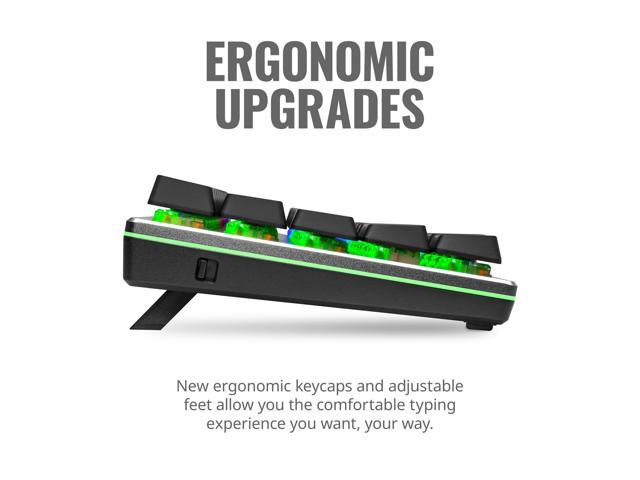 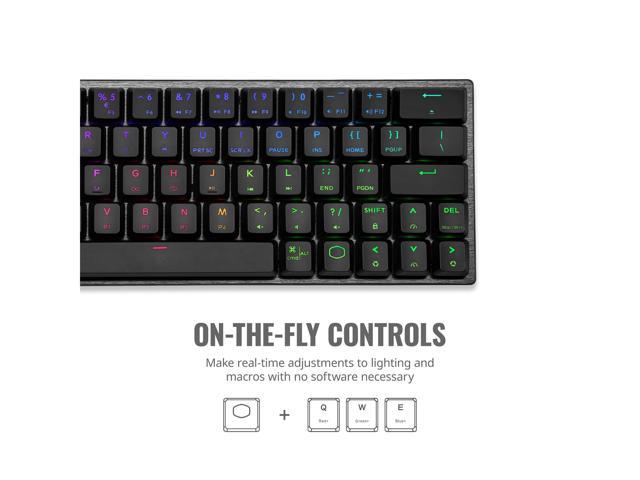 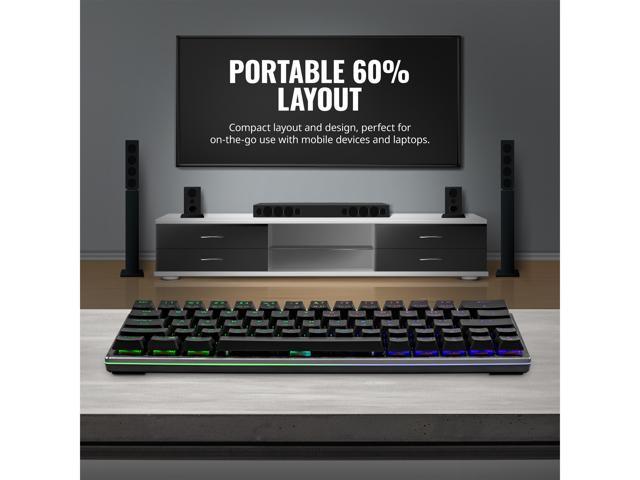 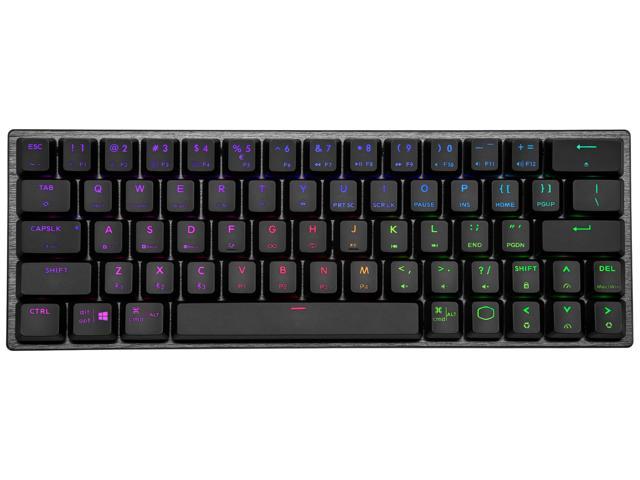 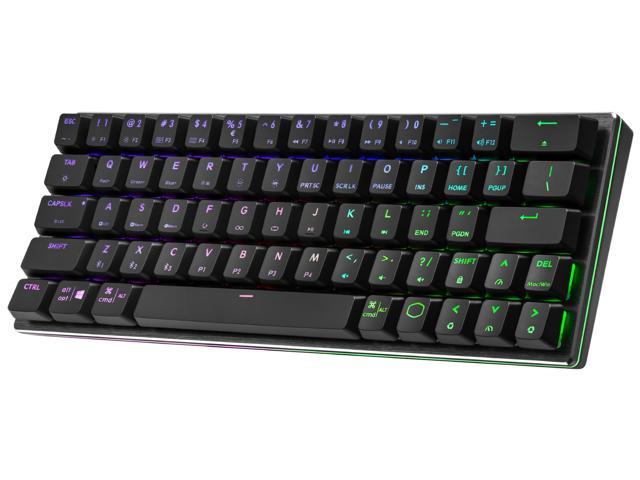 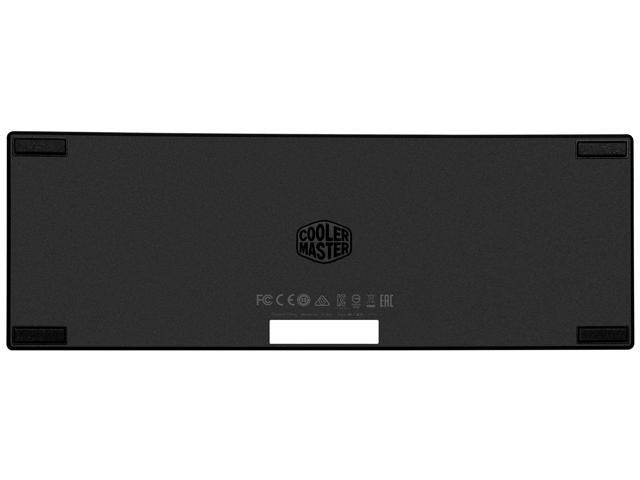 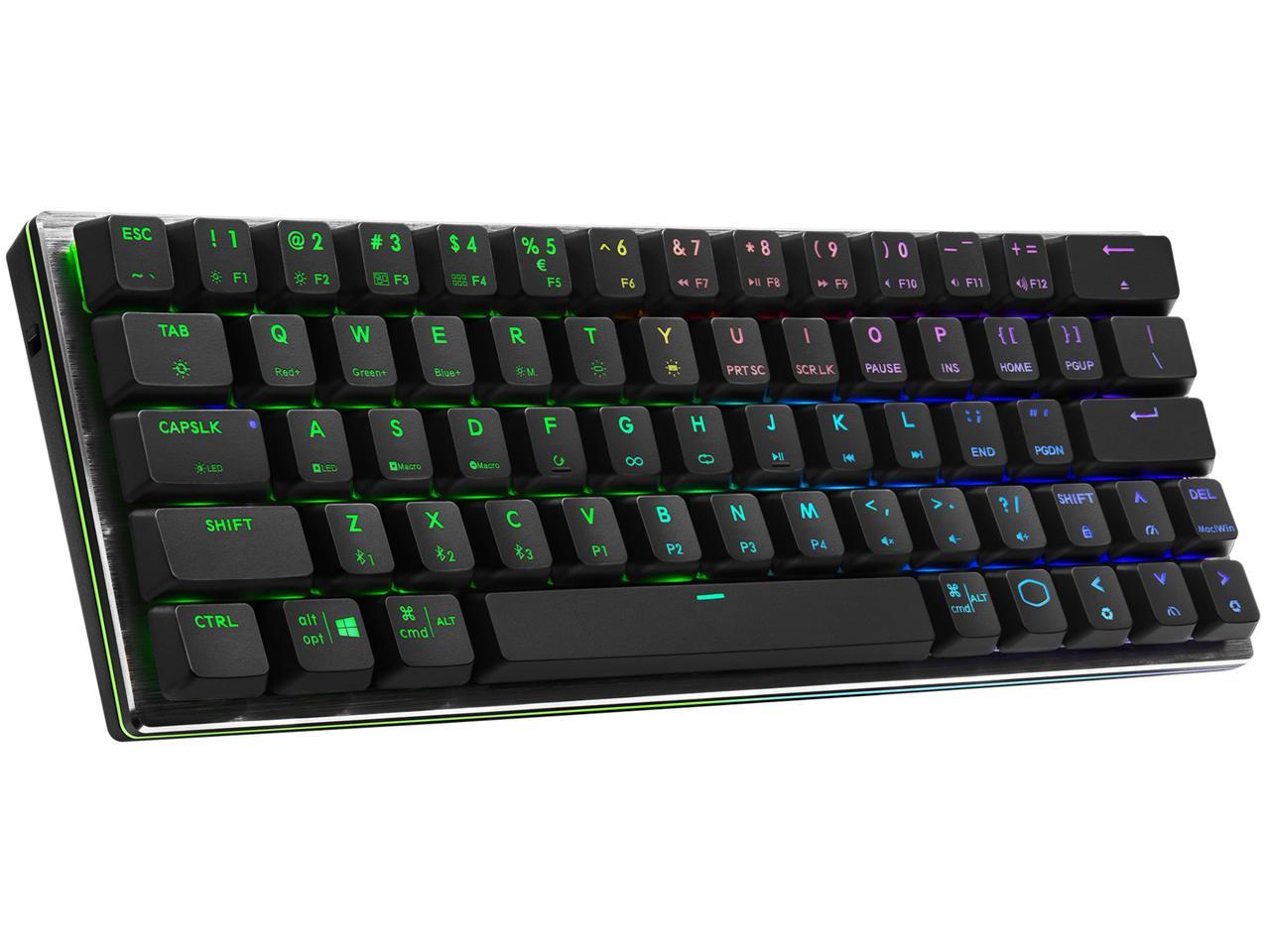 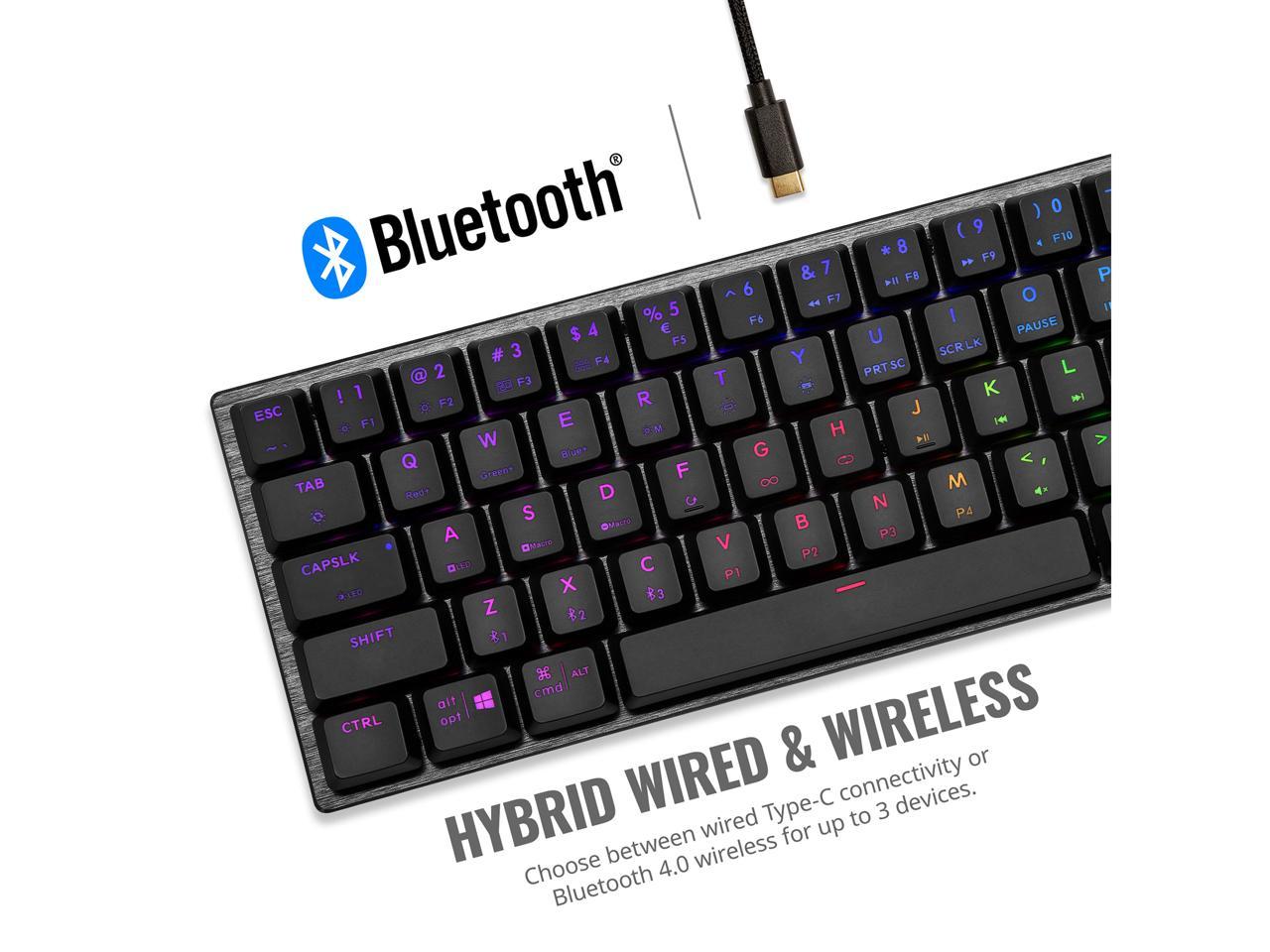 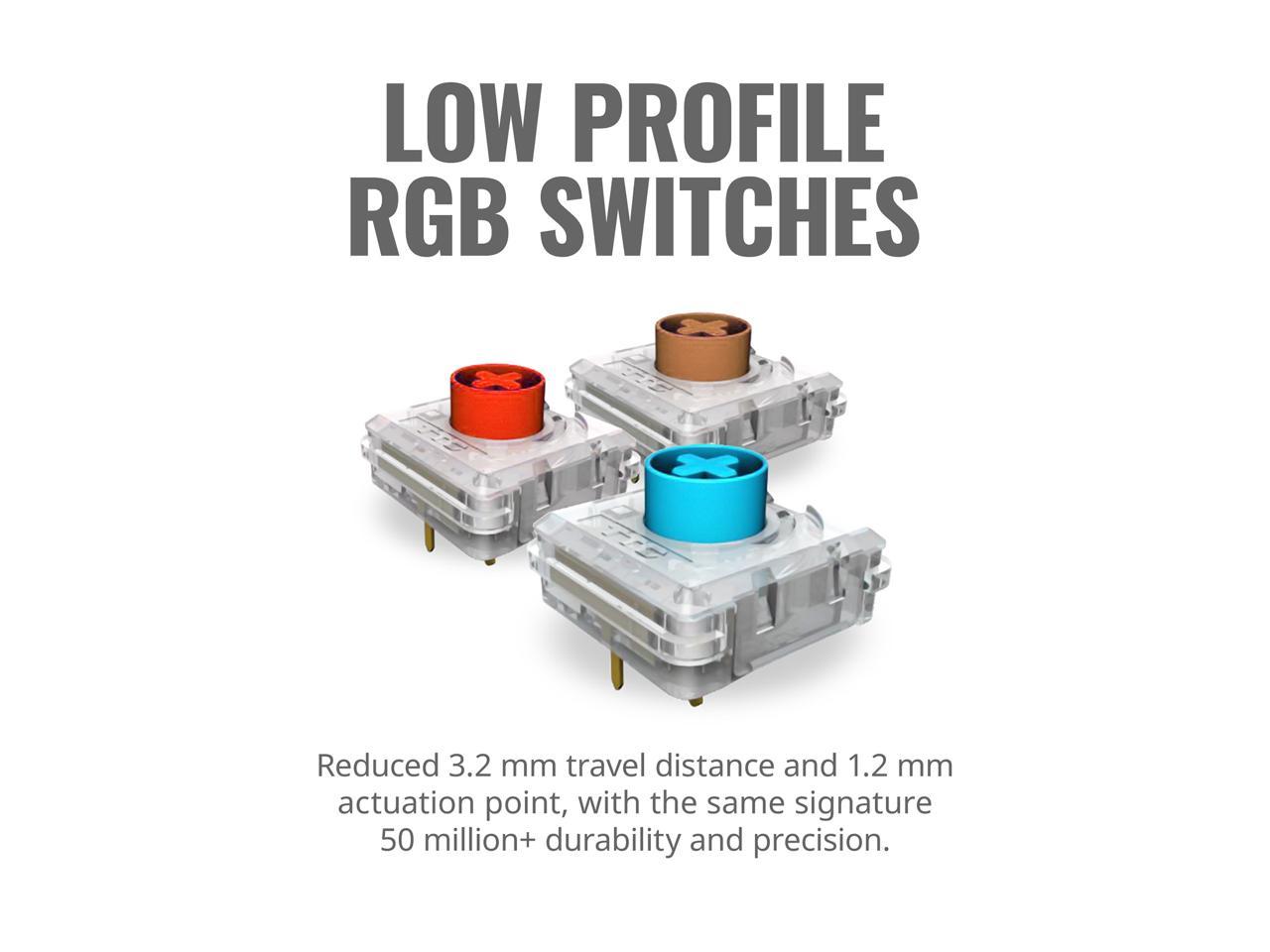 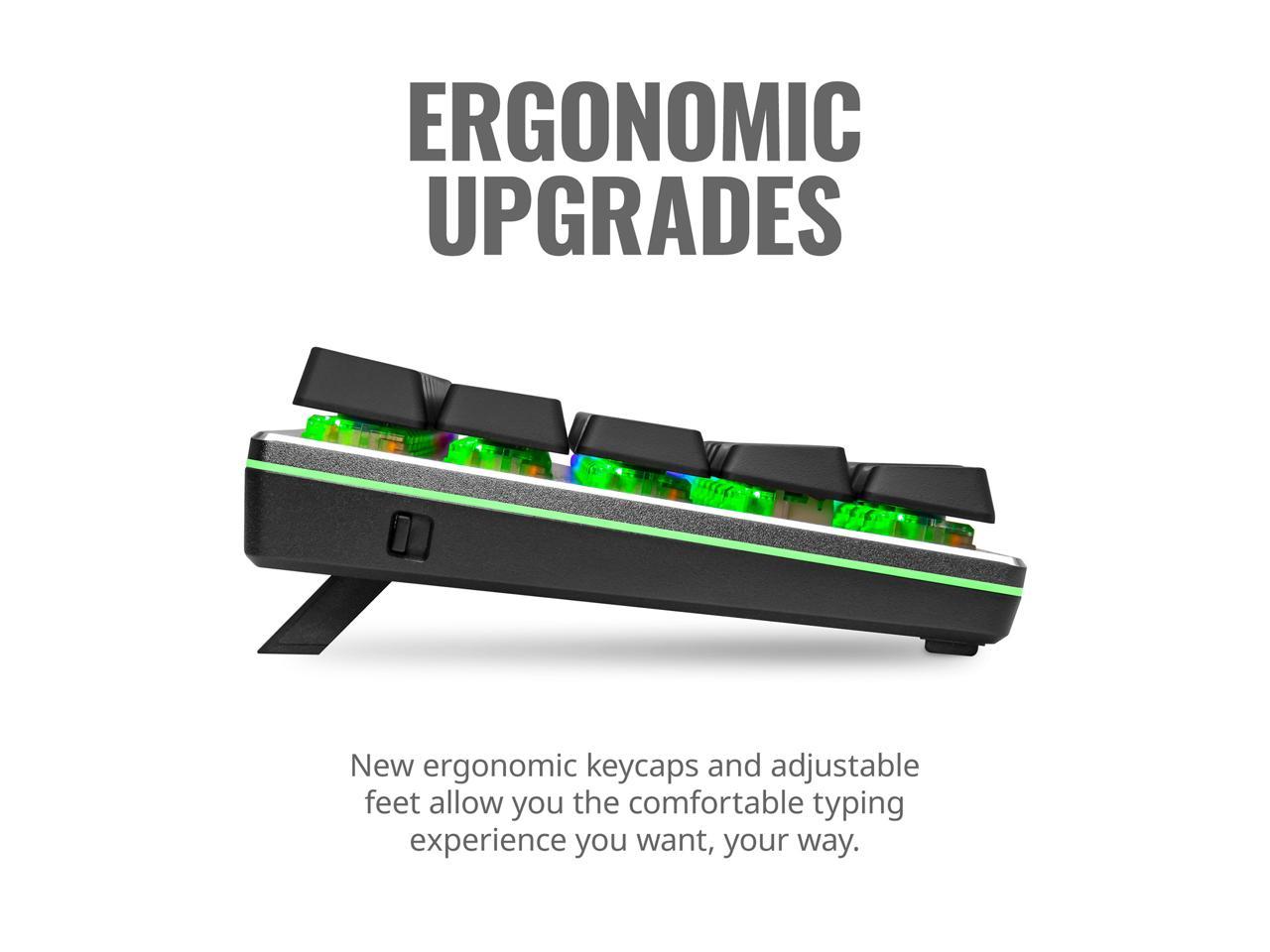 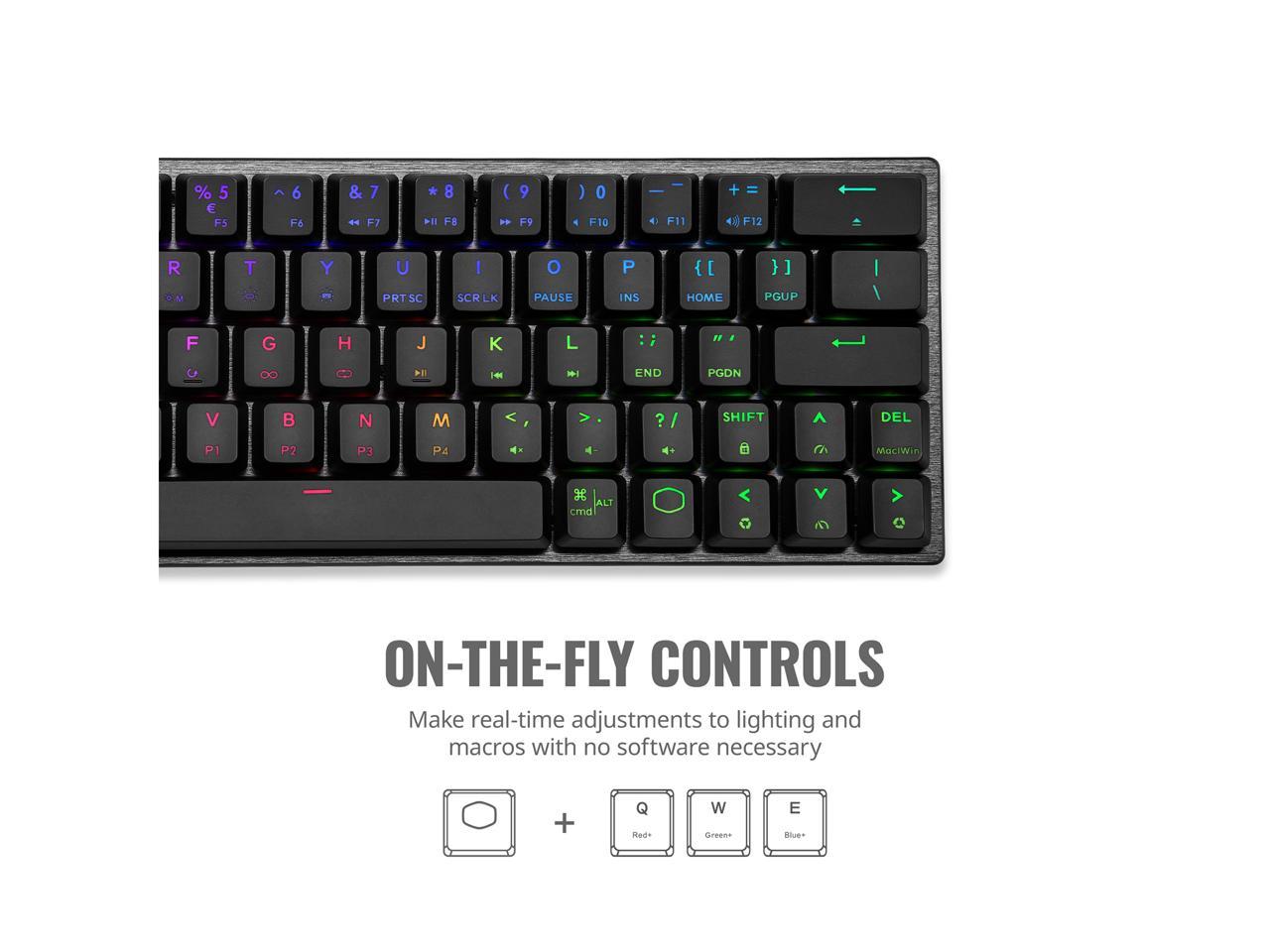 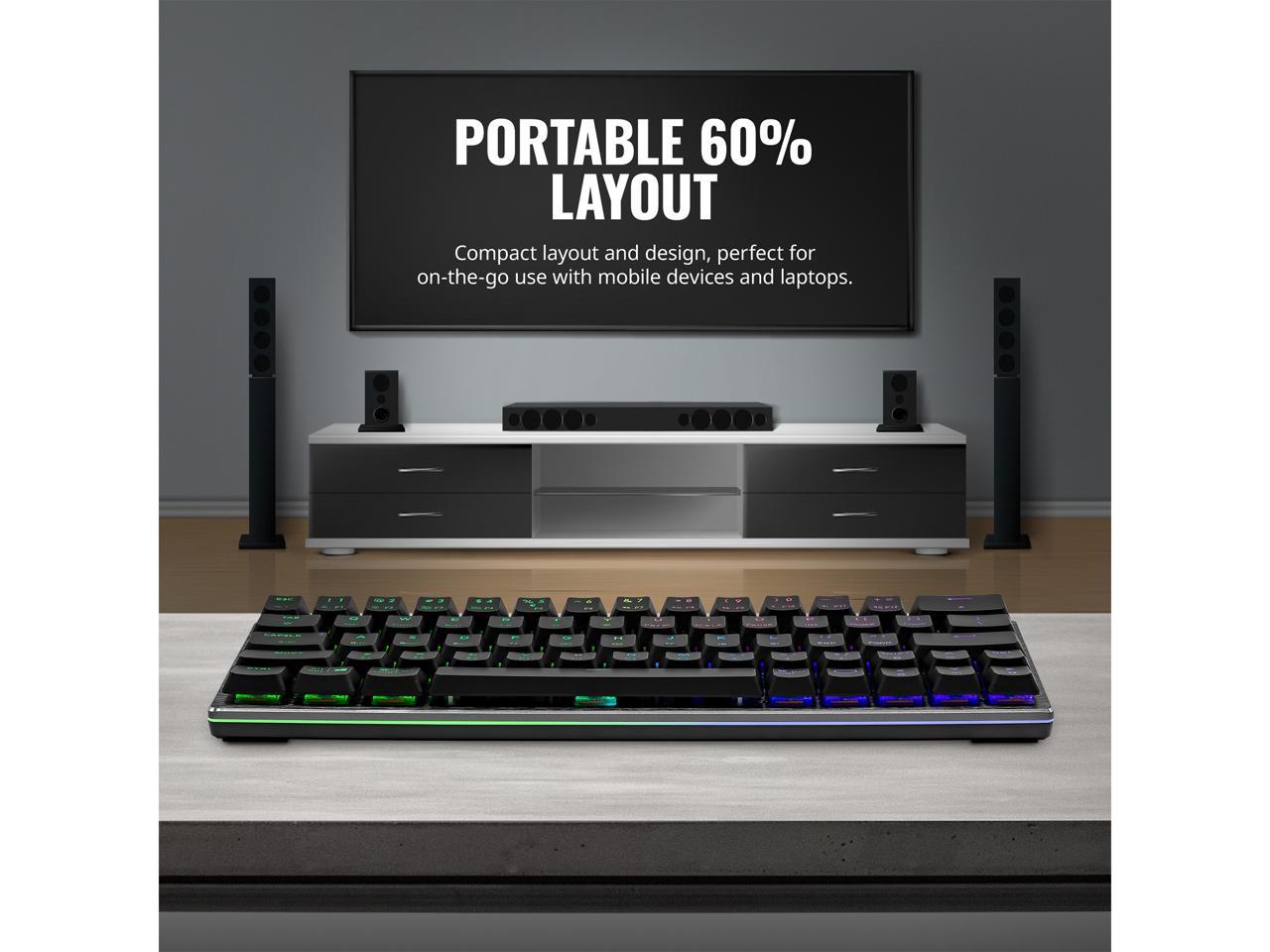 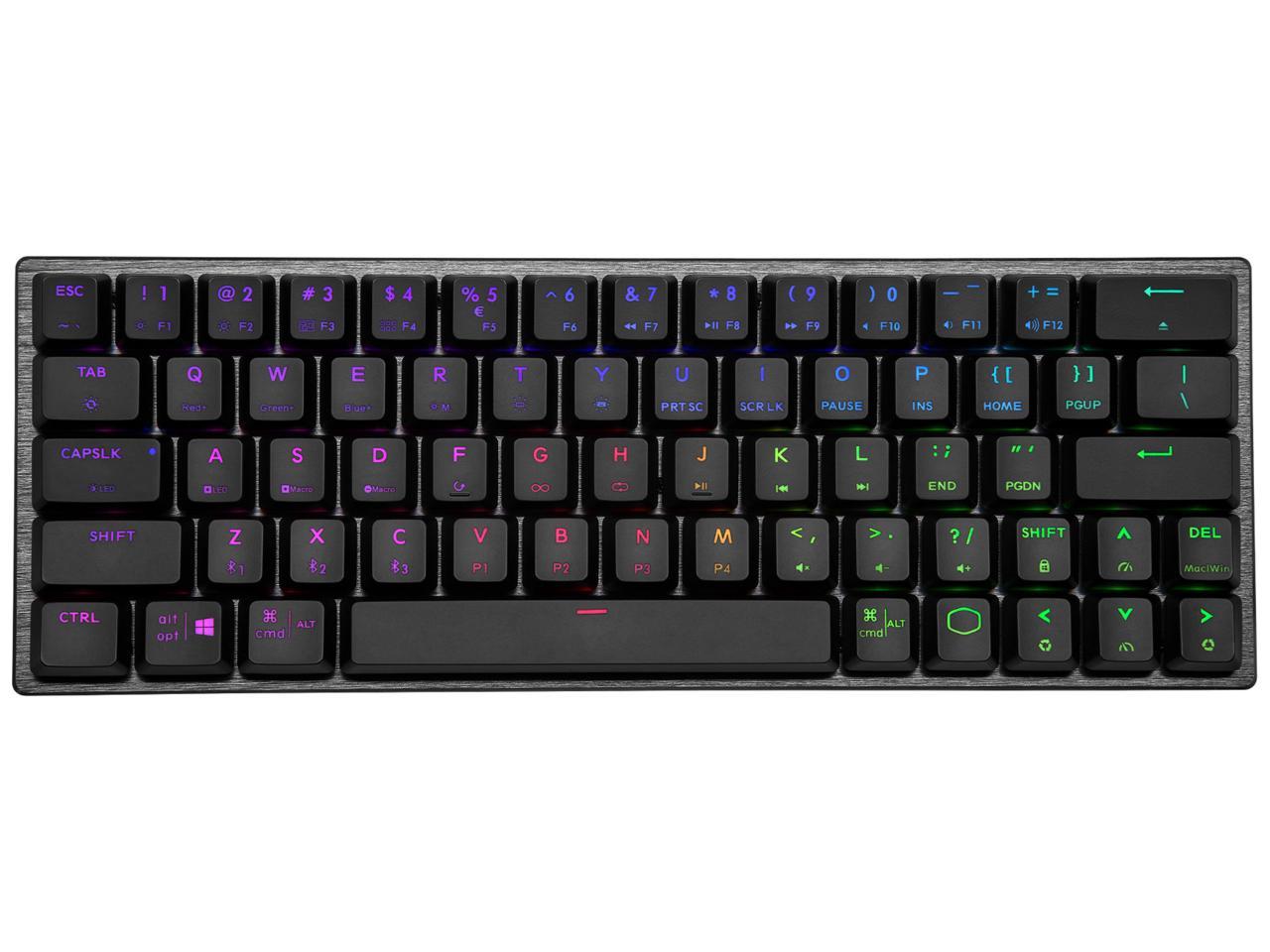 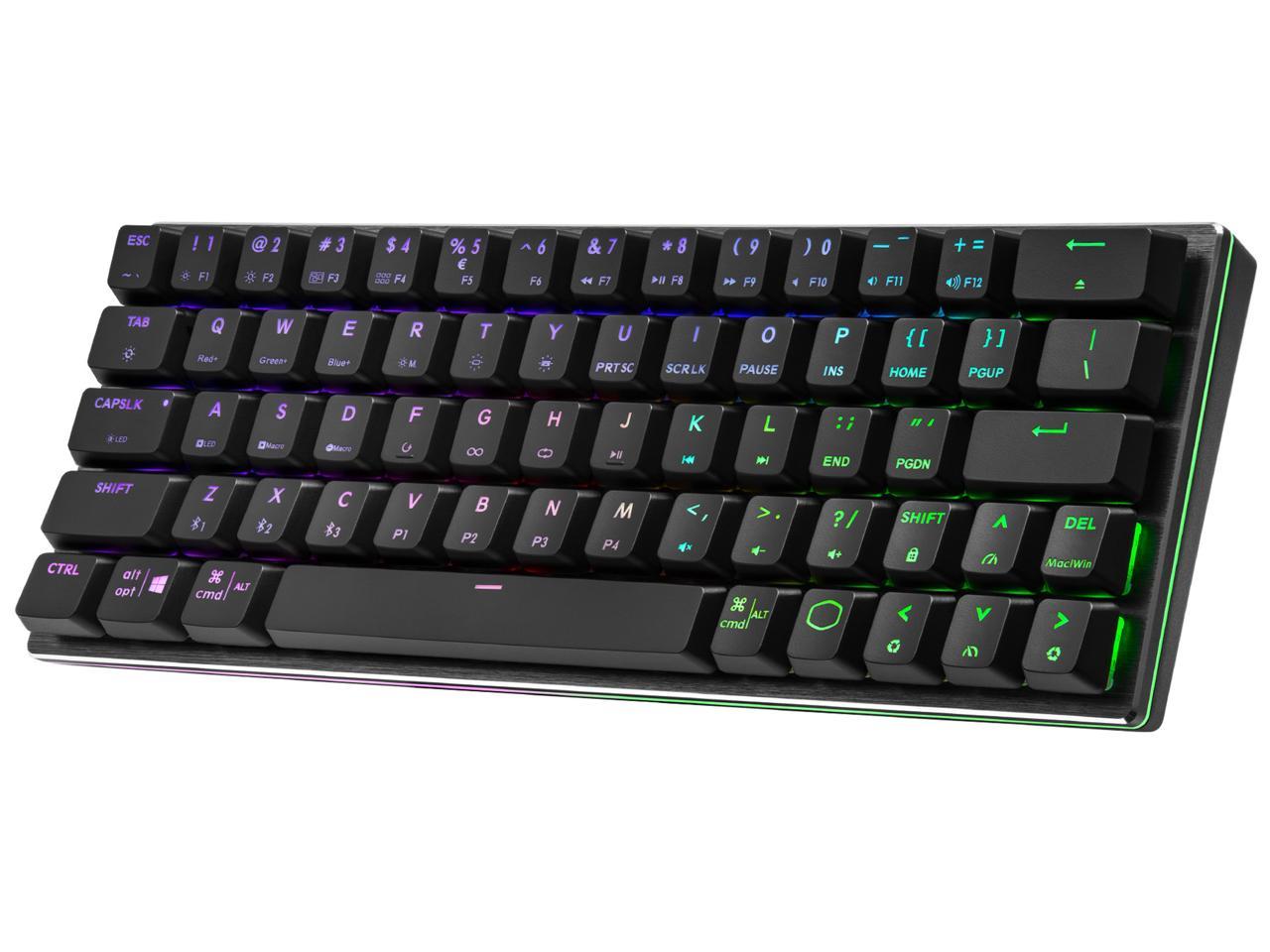 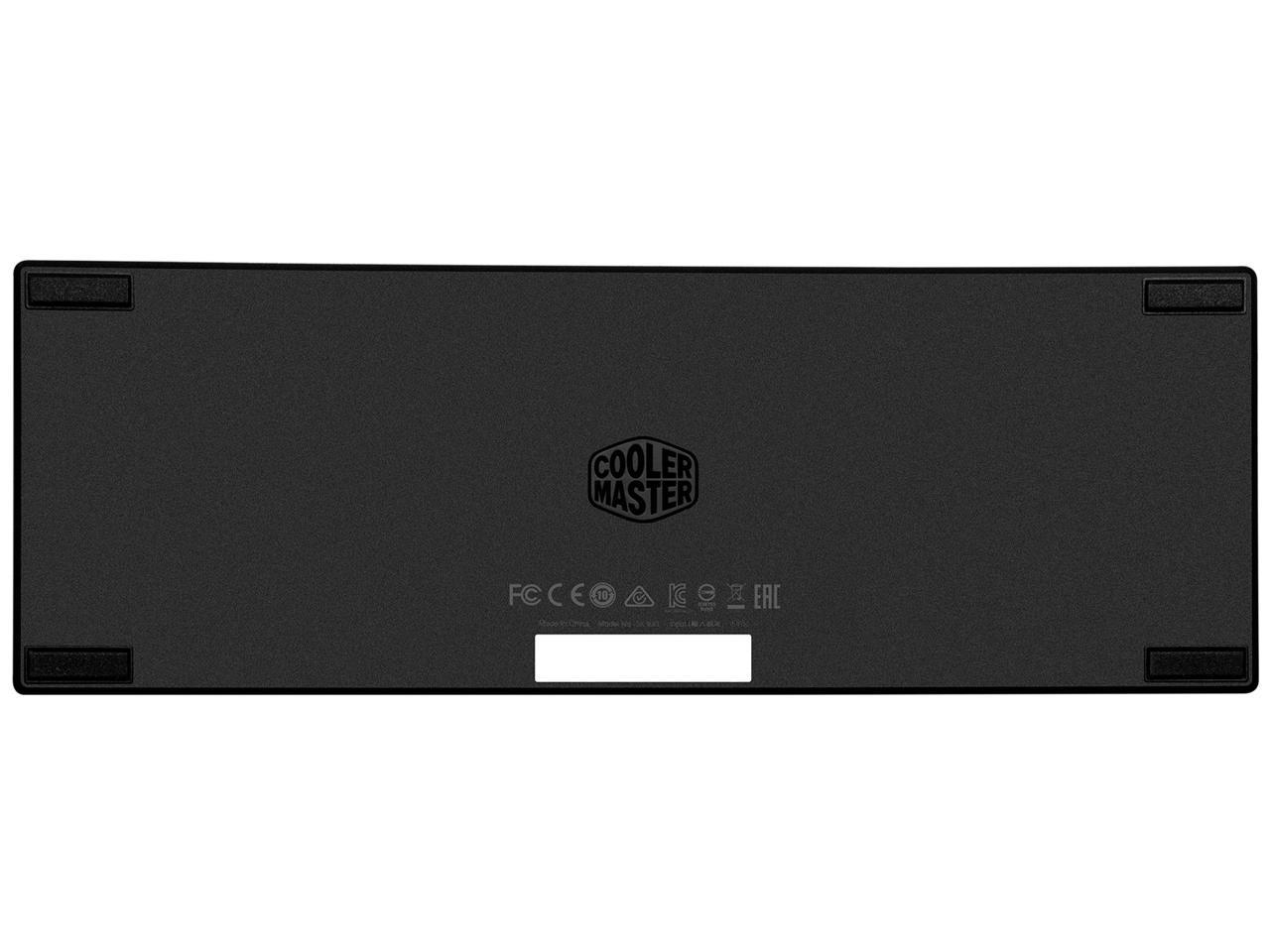 Learn more about the SK622

Pros: Keys definitely feel like some variant of the "Blue" keys. Very clicky but not TOO loud. You can also tell they are somewhat low profile compared to a regular mechanical keyboard. The LEDs and colors are definitely bright enough and vivid enough, not somewhat muddled or subdued compared to my prior 60% LED mechanical keyboard. The included USB-C cable seems to be sturdy and of good quality compared to my last 60% LED mechanical keyboard. Bluetooth connection appears to be solid and stable, easy to access and pair. A couple of other things I will note about this keyboard is that ALL of the secondary functions are already labeled on the keys and almost all of the keys have a secondary function. My prior 60% LED mechanical keyboard had a main function key and a secondary function key giving many keys a secondary and a tertiary function. Because of that and the flexibility to program which keys had which secondary or even tertiary function which often would not have a corresponding label "preprinted" onto the key would make remembering which key and which function key combination was necessary to access any of the hidden keypresses or functions difficult. That is not the case with this keyboard. Also my prior keyboard lacked any dedicated arrow keys necessitating the use of a "magic" function (as they called it) wherein tapping certain keys in the lower right hand corner double as arrow keys but holding them down would enable the main function. This made holding down the arrow keys impossible as the keyboard would register the main function and not the "magic" arrow secondary function. This keyboard does not have that problem, it has dedicated arrow keys in the lower right hand corner as well as a dedicated Del key which is nice. I also really appreciate that when you press down the function key, the currently selected profile, Bluetooth pairing profile and lighting keys light up differently to show you which one you're currently on and to remind you of which are the red green and blue LED adjustment keys. A nice touch. Also there's a red mini led on the Caps Lock key that turns green which means the builtin battery meant for Bluetooth use is fully charged.

Cons: Not real cons, but I will say that coming from my prior 60% LED mechanical keyboard, I will need some getting used to this keyboard, because of the aforementioned Pros of having a dedicated set of arrow keys as well as a Del key, this makes the lower right hand corner of my keyboard have much smaller keys where traditionally some of the keys would be larger. So I often find myself hitting the up arrow key rather than the shift key because now the shift key is the size of a regular key, not something I'm used to. Also there's no Ctrl key on the lower right hand corner so shortcuts I was used to like Ctrl-PgUp/PgDwn to switch through browser tabs now requires two hands rather than one...again, just something I will need to get used to.

Overall Review: I definitely would really recommend this keyboard if you're looking for a simple 60% mechanical LED keyboard that is also Bluetooth and Mac compatible. Really easy to use, definitely usable without any accompanying software without having to sacrifice any functionality as it was well thought out from the beginning. And yes, before you ask, I am using this with Linux! (even the Bluetooth works in Linux).

Pros: -There are so many RGB configurations - The switches work great and sound amazing -It's Bluetooth, so it doesn't require a USB dongle

Cons: -Battery life doesn't last that long, especially with the RGB on -You have to charge it every day

Overall Review: I totally recommend this keyboard if you don't have a lot of space on your desk. It has many modes with the RGB. It's effortless to change the RGB, so you don't have to download the software and can change it on the keyboard. It also doesn't scream gamer when the RGB is off, so if you're trying to be minimalistic, this is the keyboard.

Overall Review: Is a nice keyboard all the posible option are shown in the key caps very easy to use but personally Is my 1st time with a small keyboard and is getting a little hard to get use to it. But I love it overall.

Overall Review: Cooler Master, keep up the good work. I am amazed with the effort and overall build of this keyboard!