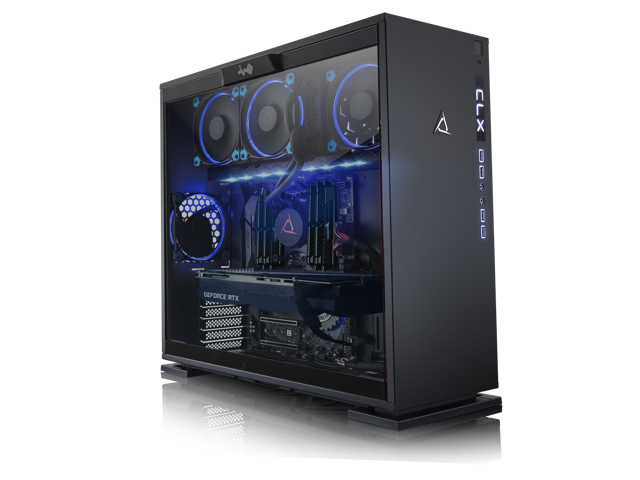 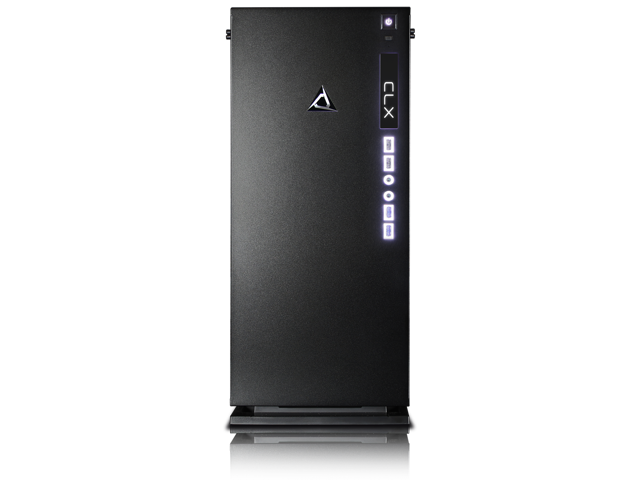 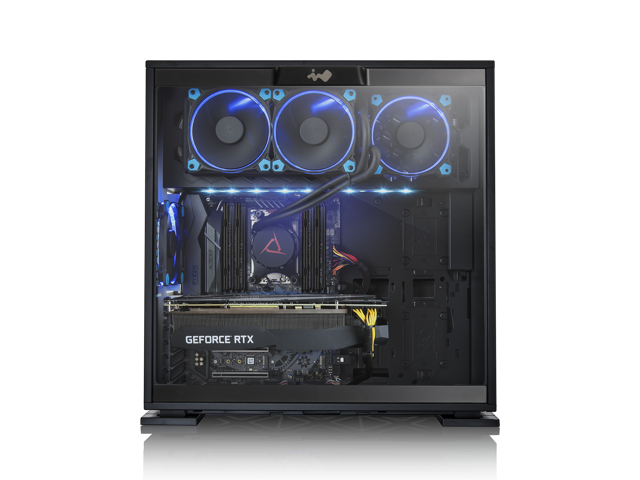 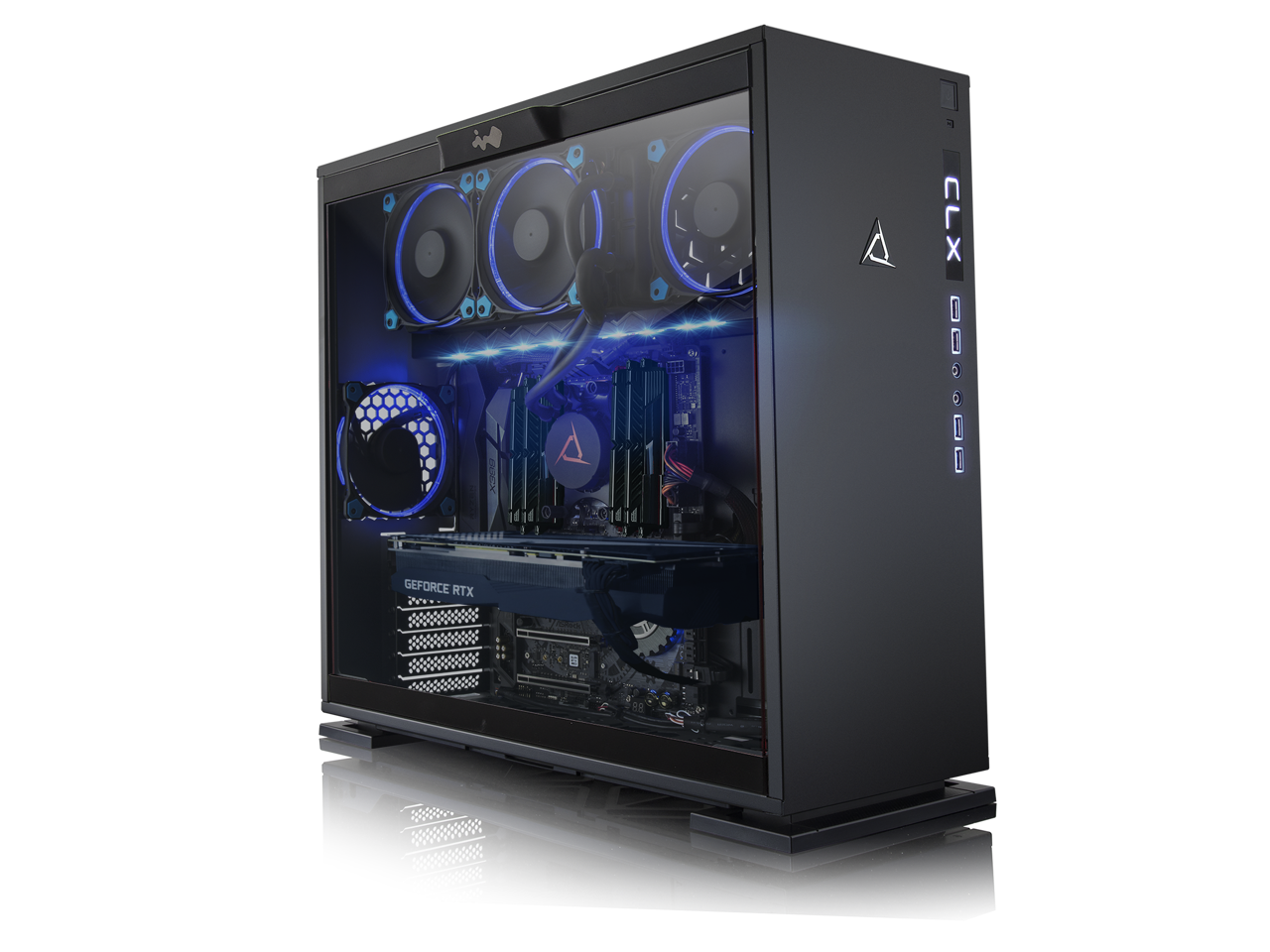 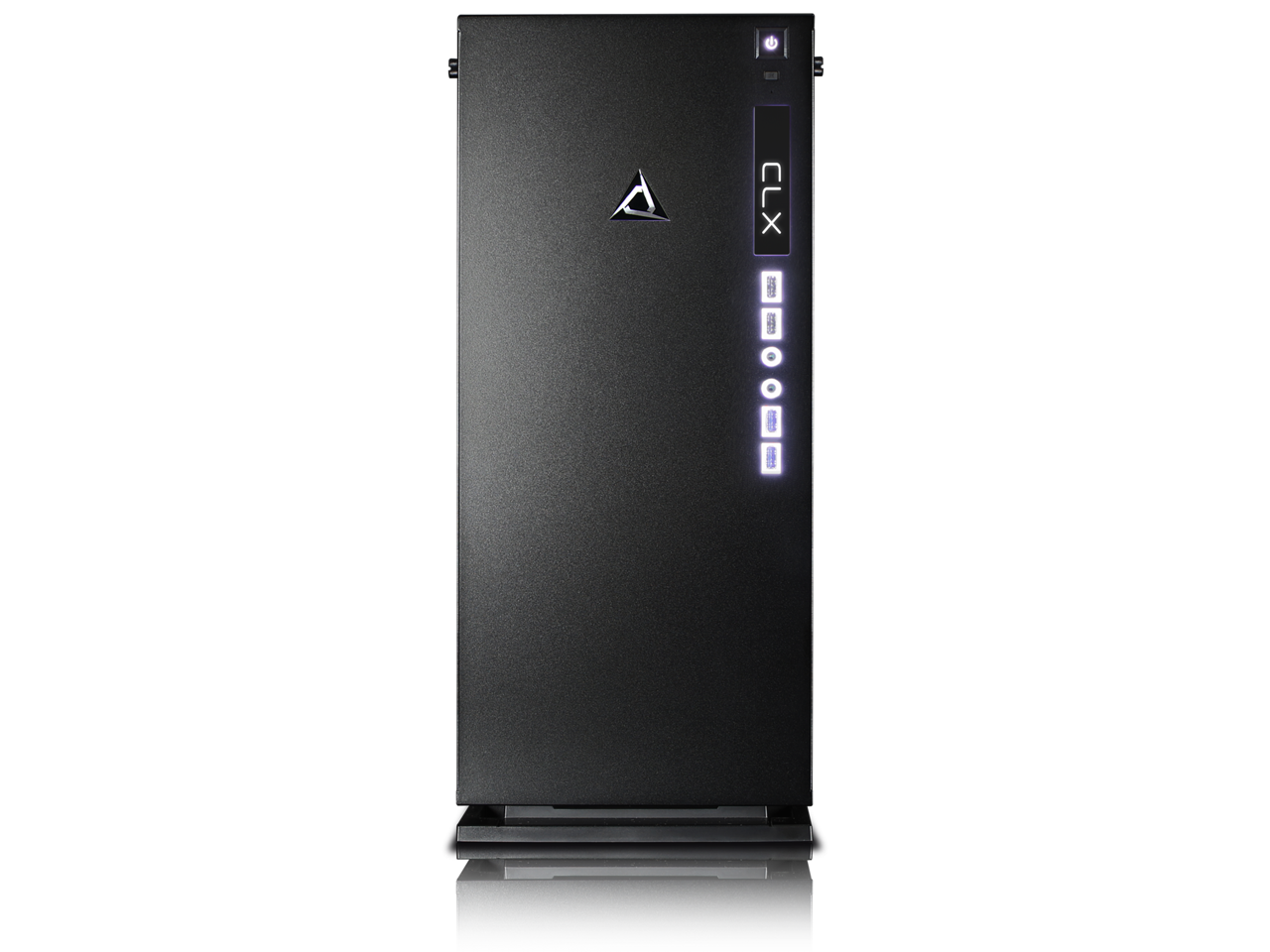 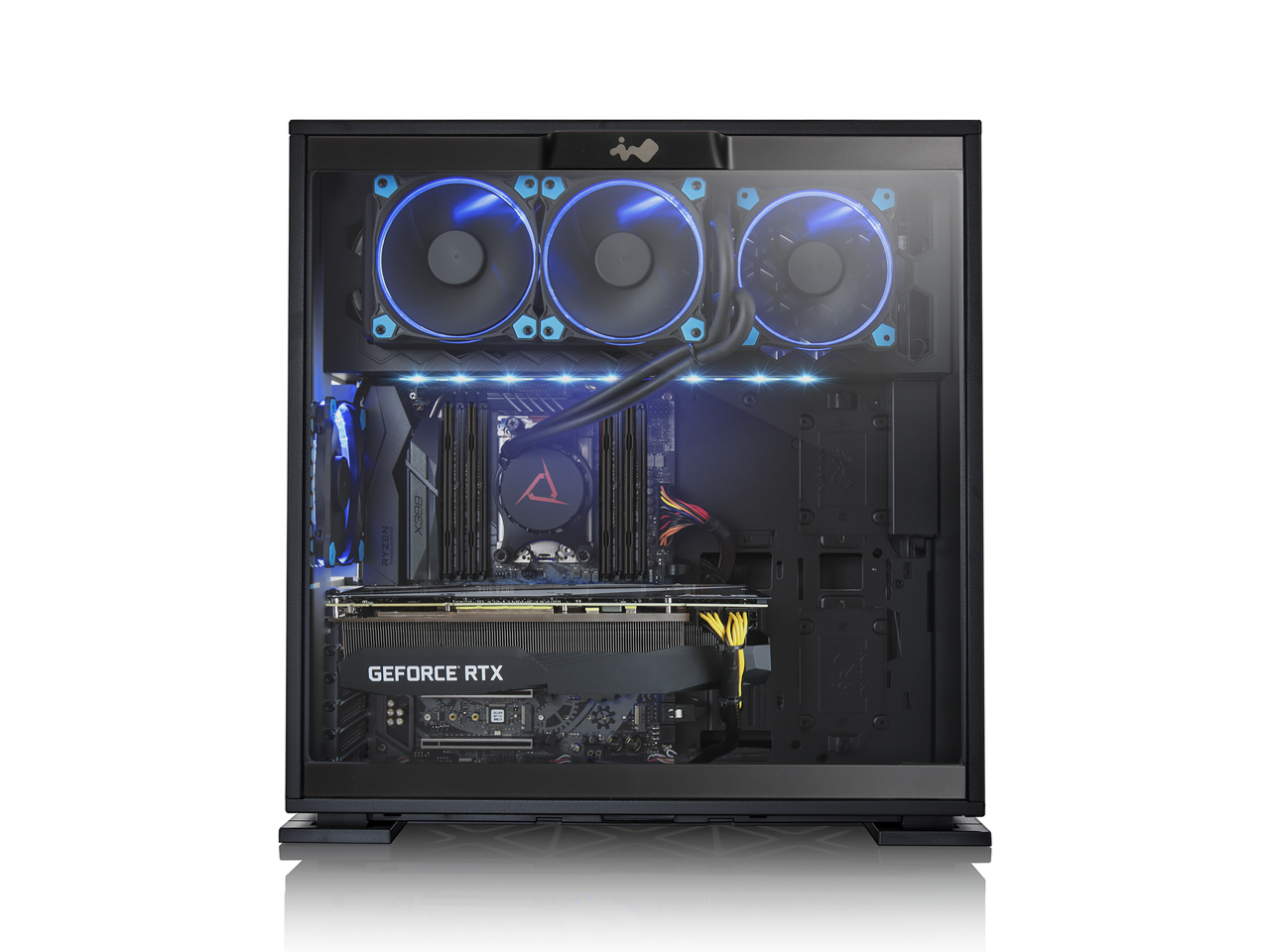 (4) Write a Review
In stock.
Ships from United States.
Fees for brokerage and duty included in price. Most customers receive within 4-9 days.
LOADING...
Overview
Specs
Reviews

No matter what your choice of digital battleground, the CLX SET can see you through to Supremacy! With its powerful Twelve-Core AMD Ryzen Threadripper 2920X 3.50GH z processor, 32GB of quick-as-lightning DDR4 memory and solid-performing 8GB NVIDIA GeForce RTX 2070 graphics, the CLX SET has what it takes to deliver the performance you demand. The CLX SET is housed in a sleek mid-tower and arrives with genuine MS Windows 10 Home 64 Bit. The CLX SET advanced performance and improved productivity start with the AMD Ryzen Threadripper 2920X 3.50GH z Twelve-Core processor.

Game harder with higher resolution, better details, and faster frame rates. With smooth multi-tasking and ultra-fast startup times, your PC experience will be accelerated to new heights. Transform your PC experience with the NVIDIA GeForce RTX 2070 with 8GB GDDR6, a fast and responsive gaming GPU ideal experiencing games at full 1080p and 4K. We view every purchase as a start to a long-term relationship and are focused on your complete experience as a system owner. We build, manufacture, and support our systems here in the United States. All CybertronPC systems are expertly assembled by hand, integrated and run through a rigorous set of stress tests for quality assurance.

We take full advantage of wiring and cable management for the maximum airflow of your system. CybertronPC is a launch partner with key vendors and is always timely to market with the latest technologies. Our systems arrive free of bloatware. We do not install any 3rd party software, resulting in a clean and reliable system.

Learn more about the CLX TGVSETRTH8A09BU

Cons: -on HDTV it overscans by 3% making L/R margins out of bounds(have not seen any display settings options to correct this, luckily my tv has a zoom-out setting) -Does not include a spec sheet -its HUUUUUUUGE/bulky -the bright LED lights will keep you up if this is a bedroom pc (you will have to put it to sleep/shutdown) -the auto-hibernate/idle mode flashes the LEDs very intensely for some reason

Overall Review: When Researching what computer to buy, I had to consider 3 factors: Specs - numbers don't lie and this is where you should start cost-to-spec ratio; unlike "name-brand-competitors" you need to buy a computer that has heavy hitting specs that won't sacrifice performance or worse overcharge you and misrepresent what you're getting. Room to Upgrade - buy a good processor, RAM can be added in later, and a top notch graphics card will always eventually come down in price. So I started with a simple search of AMD vs INTEL benchmarks to really get my feet wet, see what all these new model numbers and multicores were all about. Interestingly when investigating the 'Multi-core' scores, AMD RYZEN has risen to the occasion landing its 1950x in the top 20 and the 2930x being right at number 13. Well I decided I wanted that chipset based on its performance of 10,000+ pts... well when looking solely at Threadrippers, the price was enough to say that, well I guess the threads won't be ripped... that was until I saw the CLX model. It didn't have an RTX2080ti, but it DID have the RTX 2070, 32GBB DDR4 (expandable to 128GB?), and when I went to purchase it soon realized for an extra xxx (*can't mention prices, lol) I could get the Ryzen 2950x, instead of spending xxxx on a graphics card, keep the RTX 2070 and just replace it in a few years. a small sacrifice to get a MUCH more powerful processor, TOP 10!! The Machine arrived, and WOW! I wish I could include screen caps, I have made the right decision to get the better processor rather than the graphics card. I ran benchmark tests and this thing over performs with a whopping 13,080 on the multi-core test! The VR test that is free on steam, although isn't very intense or abusive, did praise the hardware as future-resilient and top specs, 0 dropped frames, and the processors/GPUs did not at anypoint strain or even come near operational strain... its strange but it runs games so effortlessly, it almost makes next gen feel "cheap" because it at no point is like 'maybe reduce the settings' lol... full disclosure CLX did promise me a shirt for this review. Also some side notes, I was disappointed there was not a spec sheet included, I would have loved a laminated card with that info. The USB keyboard and Mouse is a set packed in (I don't think it was supposed to come with one) - but this keyboard is Chinese plastic and laughable, like Chinese knock-off polystation quality, the rainbow led-backlight is just a static color screen, not really active programmable leds. I won't take off anypoints because super cool to pack in a basic mouse and KB, I didn't have to go hunt one down. also despite the keyboard being a joke, the mouse is SURPRISINGLY NICE! The Case feels super solid and all the components inside, likewise, are top-notch. I defy you to price out a machine with similar specs and then say you feel like taking on the risk to build it yourself, when all was considered the price difference here was negleiable. They are practically building these for you for free. the 5.1 audio is AMAZING!* (stereo receiver required) I am 100% satisfied with my purchase and look forward to VR, I would definitely consider CLX again in the future if they continue to put out quality that give you the MAXIMUM Specs for your Dollar.

Pros: Computer run super fast when it is running

Cons: It freezes up on me constantly so it doesn't make my experience very enjoyable I keep getting a watchdog violation error when it freezes. I have contacted the company and they was supposed to give me a call back that's been almost over a month.

4 out of 5 people found this review helpful. Did you?
Manufacturer Response:
Anonymous, We thank you for choosing a CLX SET, and sincerely apologize, not only for the freezing issue you encountered, but for any apparent lack of communication on our part. Please know that contacting us was indeed the correct thing to do, and that we do stand behind our products. We assure you, any lack of communication was unintentional, and likely caused by something as simple as us accidentally transcribing your phone number incorrectly, or emails we sent being caught by a filter, and being delivered to a different folder than the inbox. Regardless of the cause, we deeply regret any frustration caused by this break in communications. As we are committed to assisting you, we would ask that you reach out again, to our Friendly Customer Service Team, so that we may help to diagnose and remedy the freezing issue you have encountered. We can be reached at 855.490.2569; please reference your original ticket #, if you have one, or 3350304, if you do not. Thank you again, and we look forward to hearing from you soon, and making your overall experience a happy one!
Maicol L.
Ownership: 1 week to 1 month
Verified Owner
It is a total beast12/12/2018 6:27:58 PM

Pros: 100% functional they worry about sending your computer packaged well I recommend you greetings.

Cons: I do not see him negative the computer is very good

Cons: Product would look better if it didn't come with Window's 10 for a gaming machine and not a social product that robs the gaming ablity

2 out of 14 people found this review helpful. Did you?
Manufacturer Response:
William P., We appreciate your investing in a CLX SET, and your feedback regarding the system! We understand that different people prefer different operating systems. We also understand that after the system was delivered the O/S was changed to Windows 7. We certainly respect your opinion and feelings regarding Windows 10, and would like to respectfully provide the following information: 1) Installing a different O/S has *not* voided the warranty or Free Lifetime Technical Support. In fact, should you choose to change the hardware over time, that won't void them, either. 2) With regards to Windows 10 and gaming performance, In the early days of its release, Windows 10 did not always perform equal to, or better than, some prior versions of Windows, such as Windows 7. Now however, especially for newer games, Windows 10 usually performs as well as, or better than, earlier versions. This is especially true for games that can use DirectX 12. 3) Even with the recent addition DirectX 12 support for limited titles on Windows 7 (at the time of this writing, 7/5/2019, only World of Warcraft), for newer games, Windows 10 currently has the performance edge, due to other O/S optimizations designed to make DirectX 12 run even faster. 4) Also, there are ways to optimize for those particular games being run, such as O/S and game settings, driver revisions, etc. It is worth noting that as this configuration has an NVIDIA GeForce RTX 2070 card, the NVIDIA GeForce Experience program can be used to optimize game settings, by title, to help deliver one of the richest gaming experiences available. Should you ever want assistance in further optimizing settings, please feel free to call our Friendly Customer Service Team, at 855.490.2569. We'll gladly help you, for as long as you own the computer. Thank you again, William P.; we're certain that no matter of the O/S running on the system, you'll be very happy with your CLX SET for years to come!