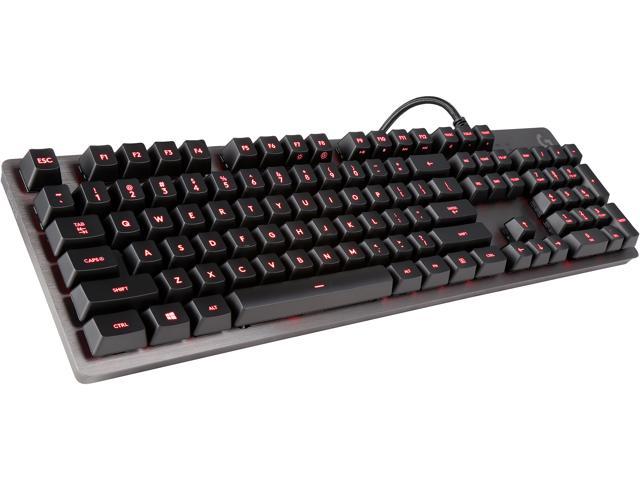 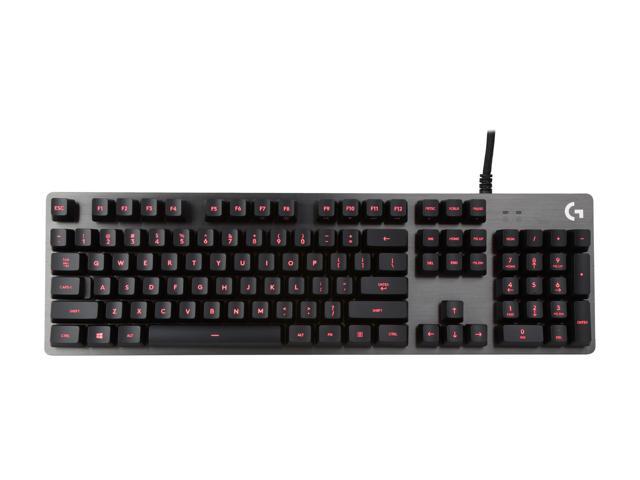 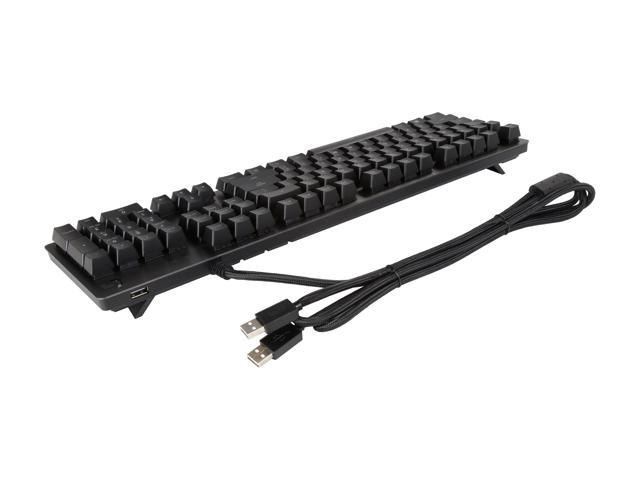 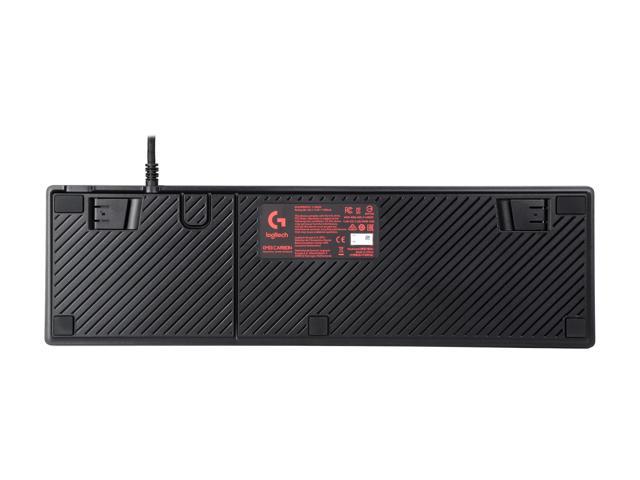 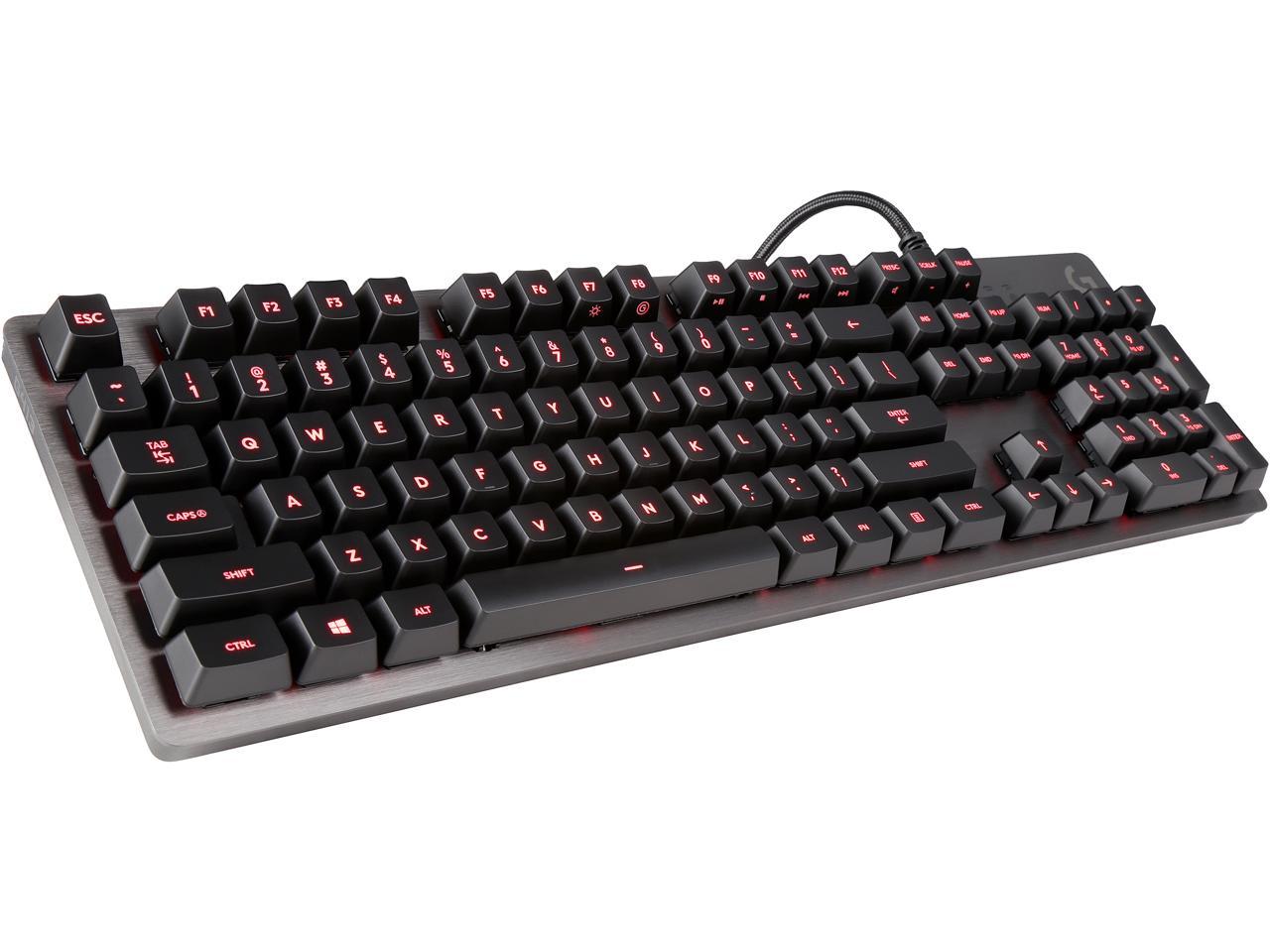 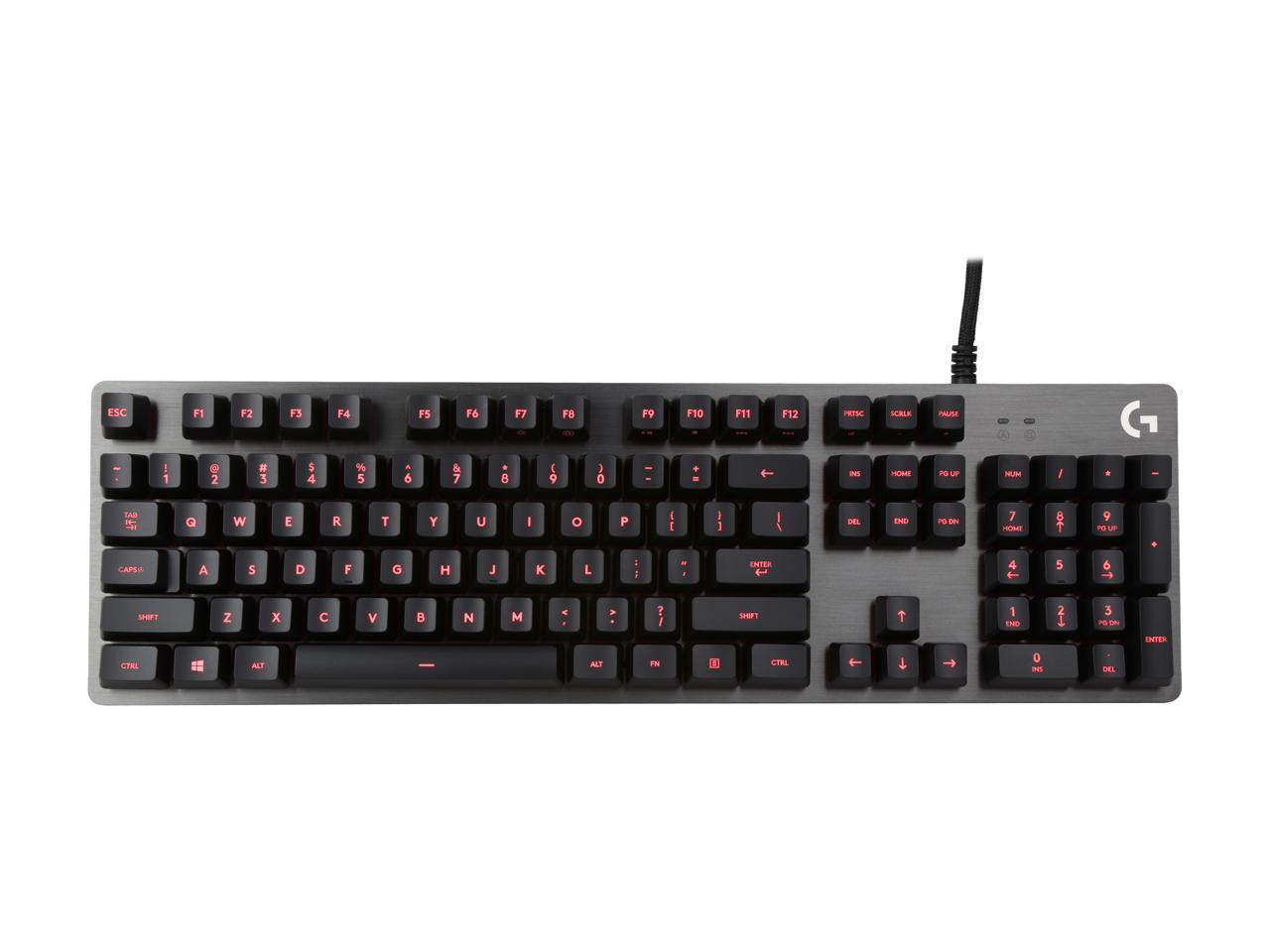 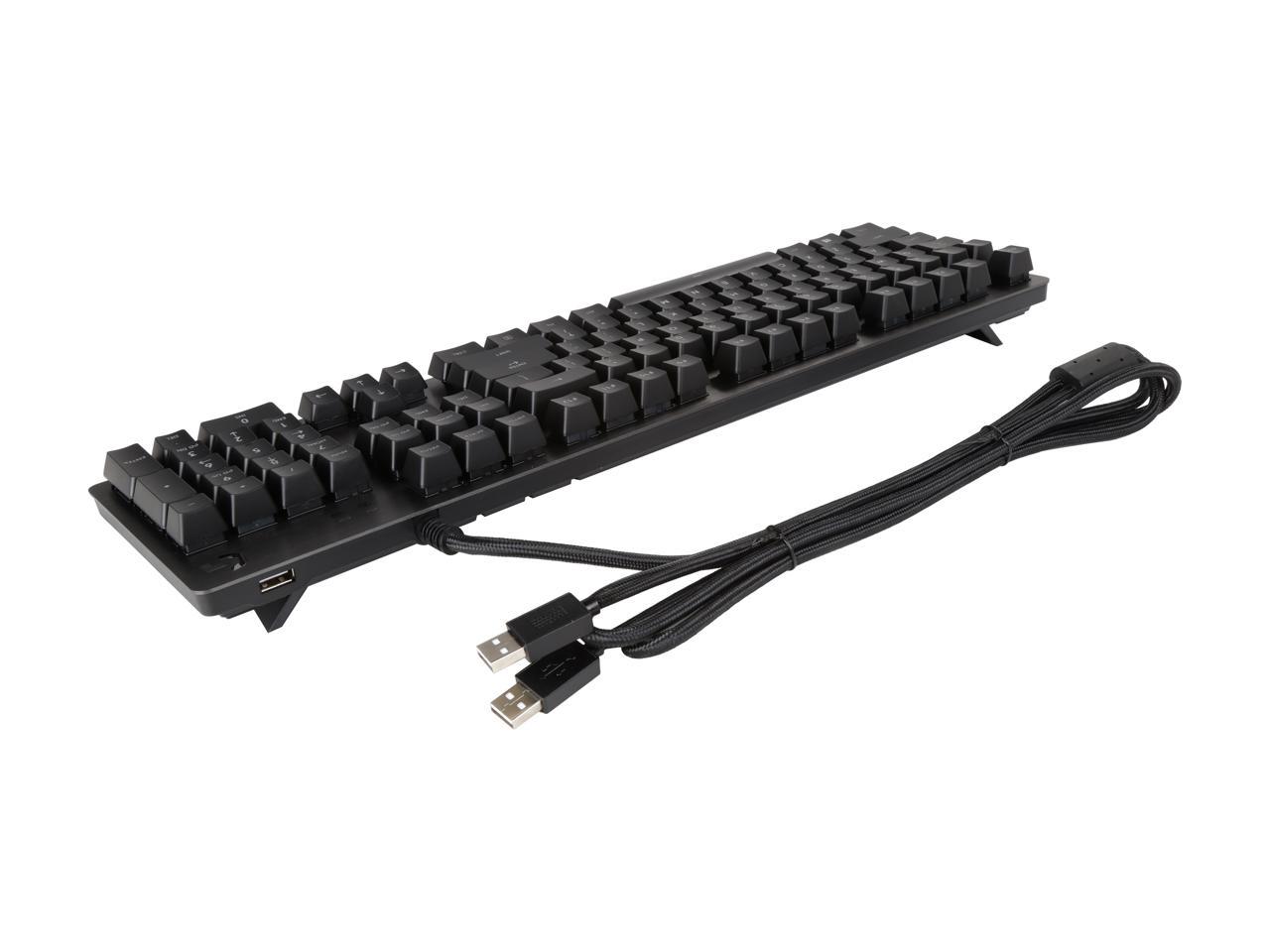 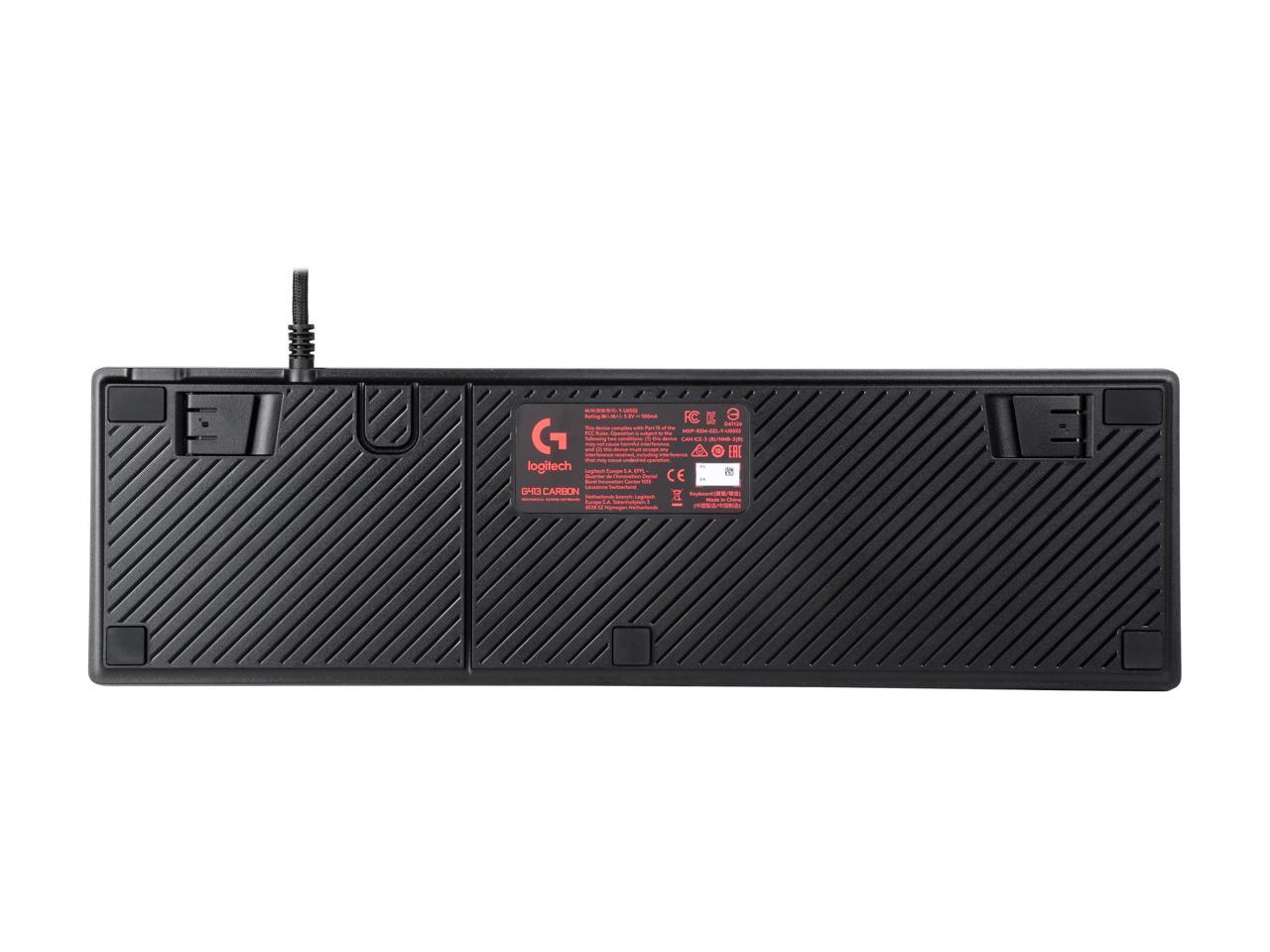 Learn more about the G413

Cons: -Price was a tad steep for it's function. -Usb pass-through is not that good, (USB 2.0 and had some connectivity issues in niche cases.)

Overall Review: Only get it if you like the feel of Romer G keys

Overall Review: It's a great keyboard if you're looking to upgrade an office keyboard. It's good for gaming, and excellent for just about everything else. I was actually surprised how nice of the keyboard it was in comparison to the old piece of plastic that I was using. But, I also don't know what the higher end models feel like. If you're picky, then I'd probably check it out before you buy it. It blew my expectation's away. Braided cord, extra keys, and it's a great look. It looks super fancy.

Pros: * Very close to a standard PC 104/105 layout. The only change is the right "windows" key is a function key instead. * Reasonably compact size for a full keyboard. * Romer G switches are pretty fun to type on. They don't require much force at all (activation point is about halfway to the bottom). They have a very slight tactile bump and are semi-quiet depending on how hard you press. * The aluminum base plate gives the whole keyboard a very solid structural feel. It also causes the keys to make a nice sound if you bottom them out. * Red glowing letters on the black keys and silver base looks fantastic. Who needs RGB? * The USB pass-through is nice if you use a wired mouse with a relatively short or otherwise annoying cable; you can simply run the mouse USB cord to the keyboard instead. It's not as impressive as a hub but it is simpler. * Cables are braided and have a cool texture to them. * It works as a standard USB HID device without any special drivers. Linux (Debian) recognized it without any issue. * Comes with extra replacement keys and the cap-puller. * Five brightness levels for the backlight (one of those is "off", of course). * Labels for the special alternate functions of the F7-F12 keys are printed on the front side of the key and light-up when the backlight is on.

Cons: * No NumLock or Scroll Lock LEDs (only caps lock). This is a bit inexplicable because there would have been plenty of space for them. * Only one windows/meta/super key (the left one), if you care about that.

Overall Review: * Not really sure what the one anonymous reviewer was even talking about with the "firmware" (probably the Logitech add-on software). I've never installed special software for a keyboard and never will. * The other anonymous reviewer claims that Romer G switches are similar to a membrane keyboard. I've used dozens of cheap membrane keyboards in my life and can safely say that they're vastly inferior to this switch type. Maybe Cherry MX or some other type is even better (I'm sure I'll test them sometime), but this is a big step up if all you've ever worked on were membranes. * Stephen D sounds like he might as well be describing a completely different product. Fast typing is not difficult, there is no "reset time" between key presses, the keys do not come off easily by hand, and backspace is its normal size in the normal place with the same activation force as any other key. * I bought it for $80 + shipping and it was easily worth that. Highly recommended.

Overall Review: Couldn't be more disappointed. 2 months in and a broken key that gave no sign of having broken until I lifted the board off my desk to wipe it down. This had to be a pressure break, while gaming.

Overall Review: I'm sure the keyboard would have been nice if it worked.

Did you find this review helpful?
Jon D
Ownership: more than 1 year
Verified Owner
Plug and play, happy about everything except longevity9/16/2020 9:37:11 AM

Pros: - The extra port is a nice option for me, I tend to use it for a camera as its easy to get to and unplug again when I'm done with it. Also isn't clunky to use. (A previous keyboard of different kind couldn't fit certain USB devices due to restrictions around the ports, this one won't have such an issue). - Good price for a short term keyboard - Stands are acceptable. - Still functional at a year. - LED brightness control is onboard the keyboard, so no software issues. - Multimedia controls works well, have never had an issue with them

Cons: - The W key has started getting finicky, has to be pressed straight down and if there is any deviation in any direction it will stop registering. (Irritating while gaming and something's trying to eat you.) - Only lasted a year before any problem started occurring. If you buy, expect it to last about that long, and plan accordingly. - Doesn't have a Num lock light. (Minor) - LED's will turn on if the computer is off and a button is pushed, and they will stay on without user intervention. (Minor)

Overall Review: I would have liked it to have lasted longer. I rejected other products because I judged them too cheap, but this one I thought was a good in the middle, and the USB port a bonus. I guess not, especially since it seems that's about how long this lasts for many others. Mine does still work, just a little more finicky. - It looses one and a half eggs for its longevity, and the other half for the collective other issues. (I would put a 1/4th since the other issues are so minor, but that's how the rating system works.)

Overall Review: I wanted to find a budget keyboard that could fill my needs for a good all-rounder keyboard. This keyboard didn't let me down on that matter. Keys have a nice click, feel comfortable, and responsive. The only thing that did let me down is that the first day after I got my keyboard, I wanted to charge some headphones with the USB port the keyboard was. My cable got stuck, and after trying to get it out several times, I managed to get the cable out, but the top white bar of the port is now stuck on the cable. Now nor the cable nor the port work. . . . .

Pros: First mechanical keyboard but I feel like the clicking is pretty solid and the keys feel nice underneath

Cons: Control key is definitely starting to go and it's only been slightly over a year. Might have to switch back to my old keyboard that I used for over ten years (and mostly stopped because it had gotten so grimy)

Overall Review: There's probably a better keyboard out there, although this was one of the cheaper mechanical keyboards. I hoped it was quality, considering how many logitech materials I've owned, but it seems to be on the lower end.