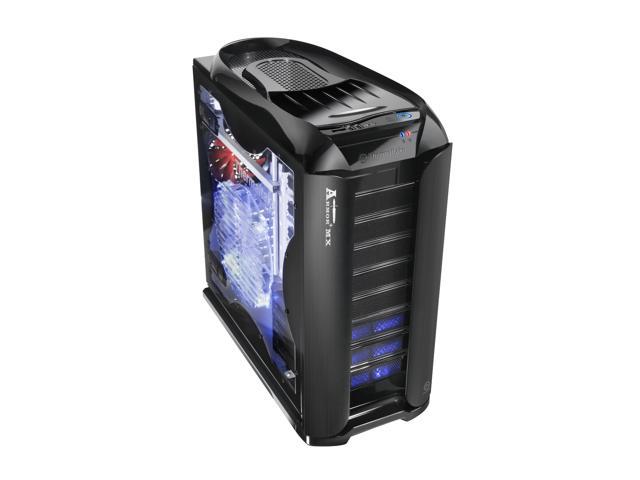 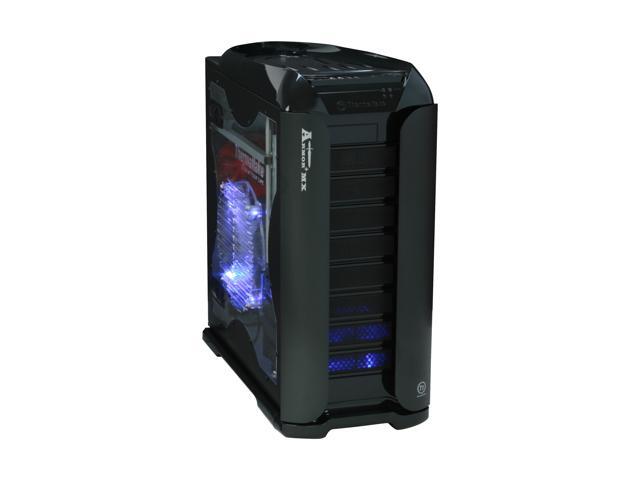 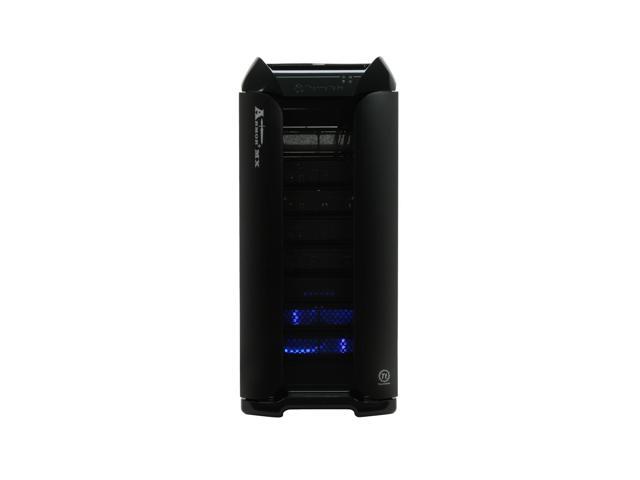 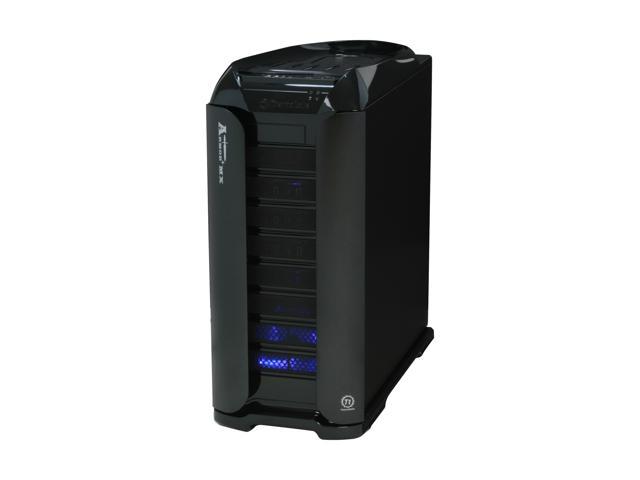 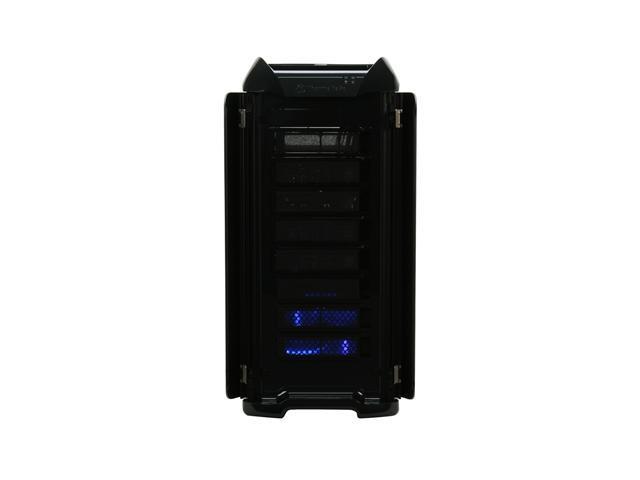 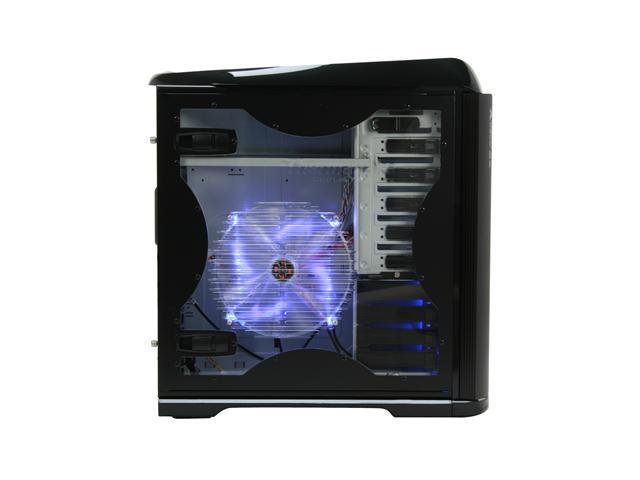 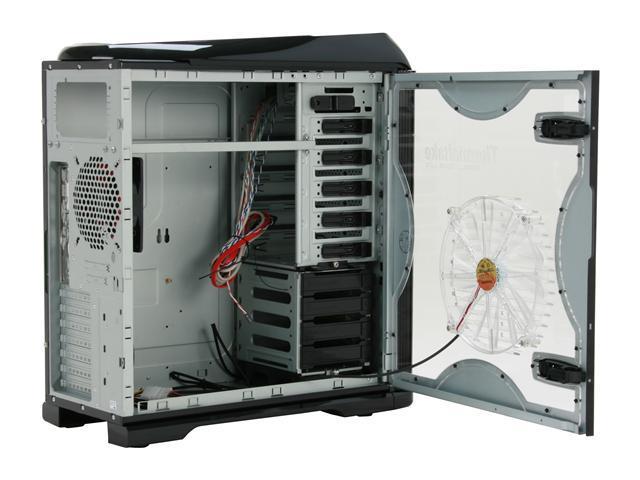 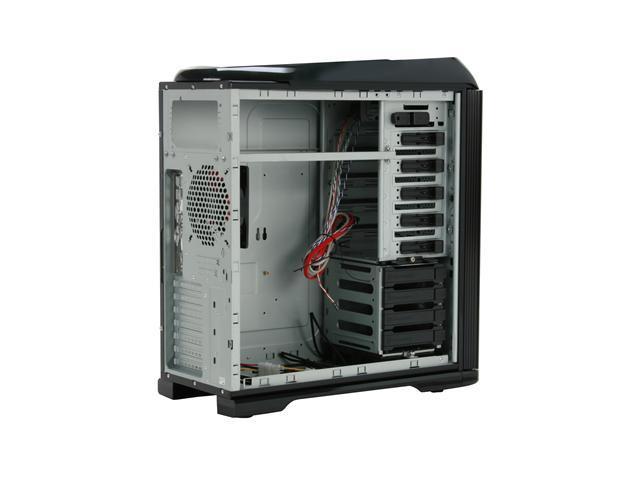 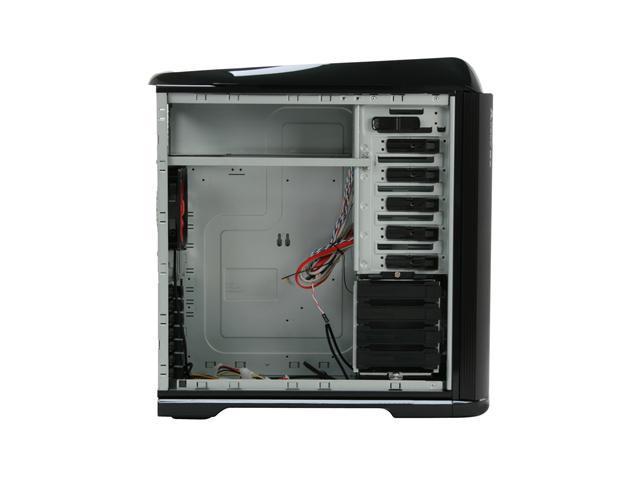 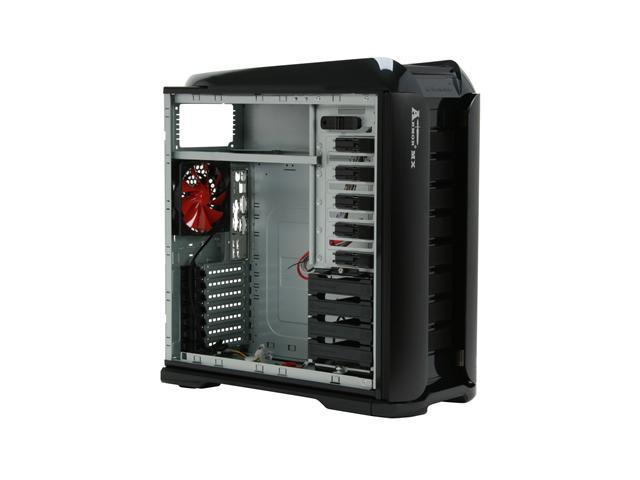 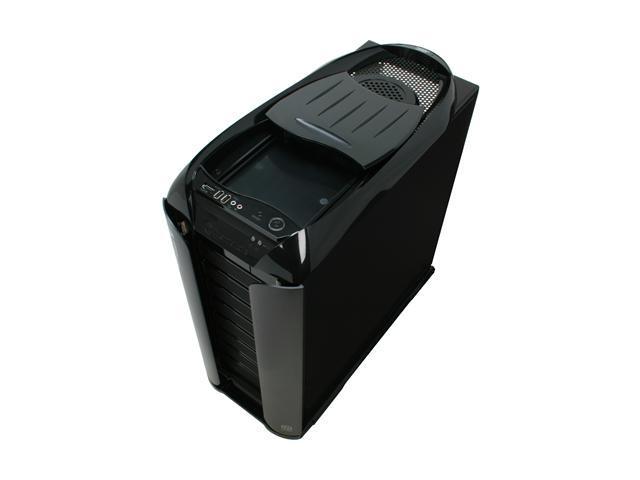 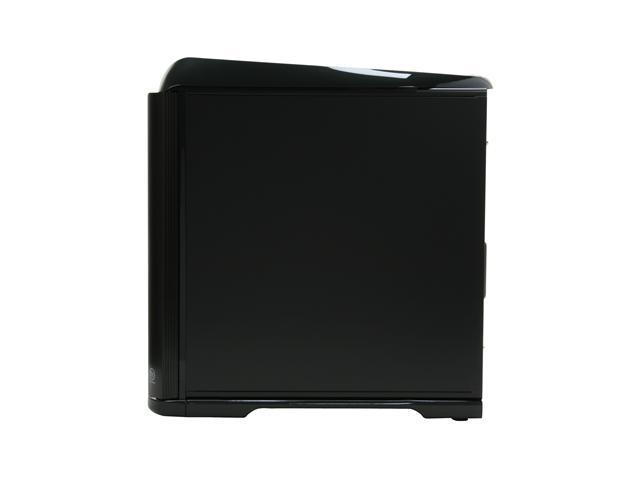 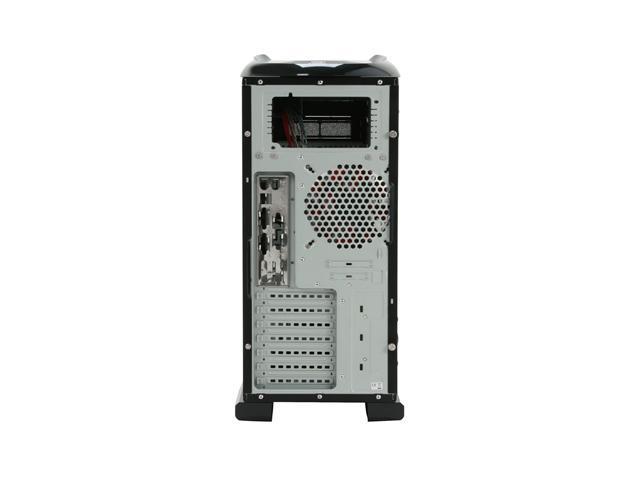 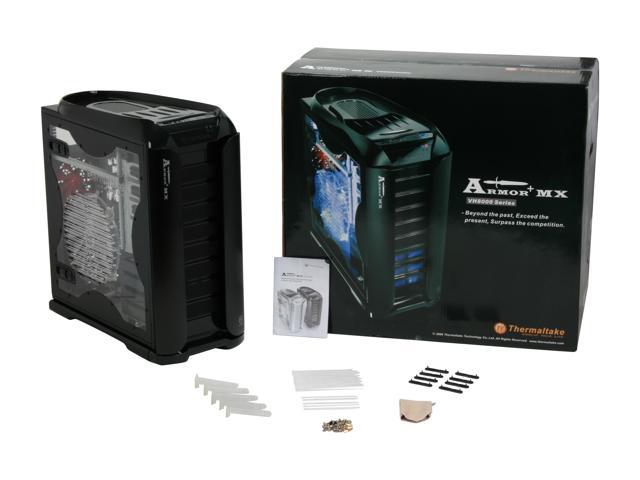 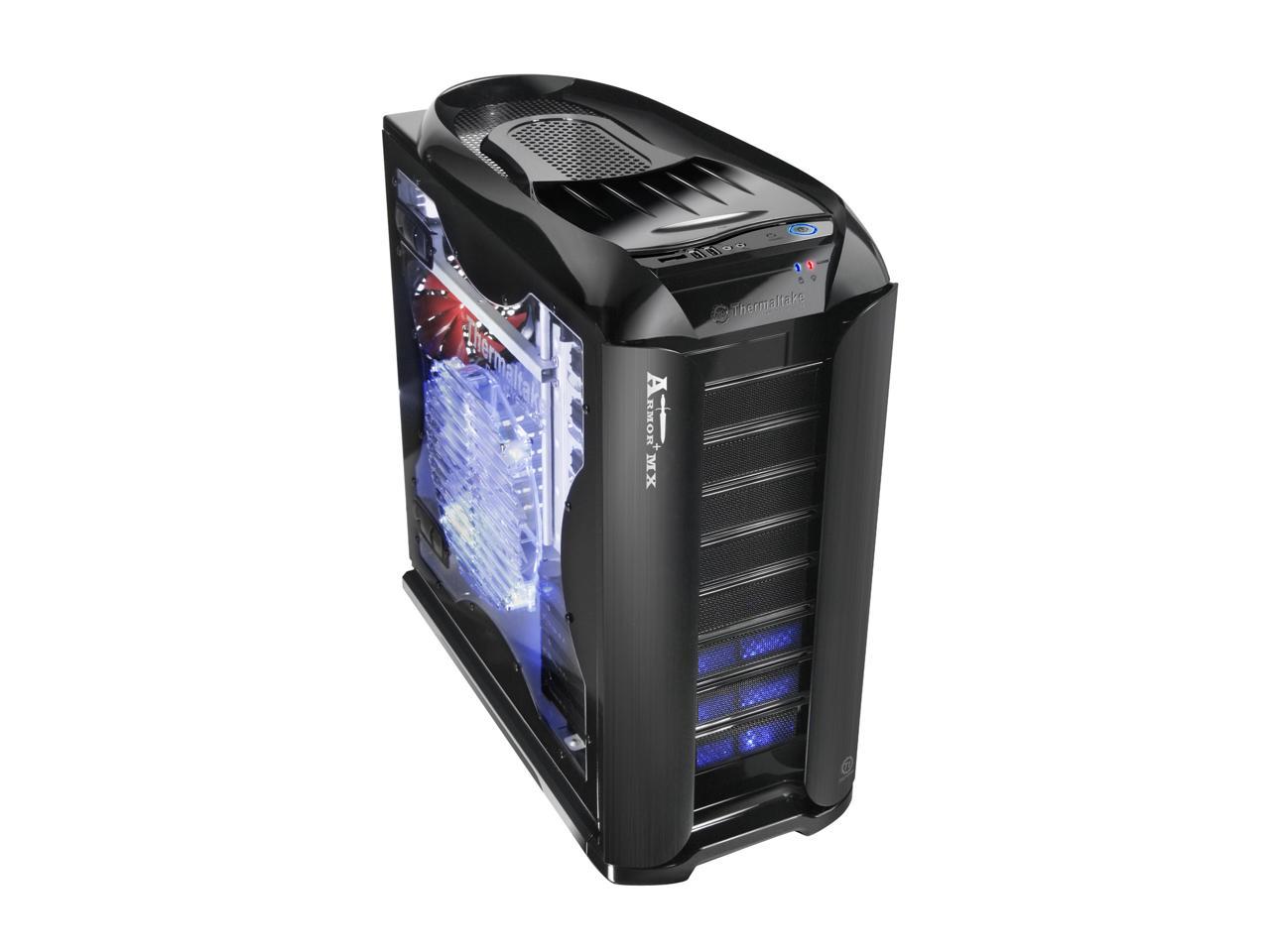 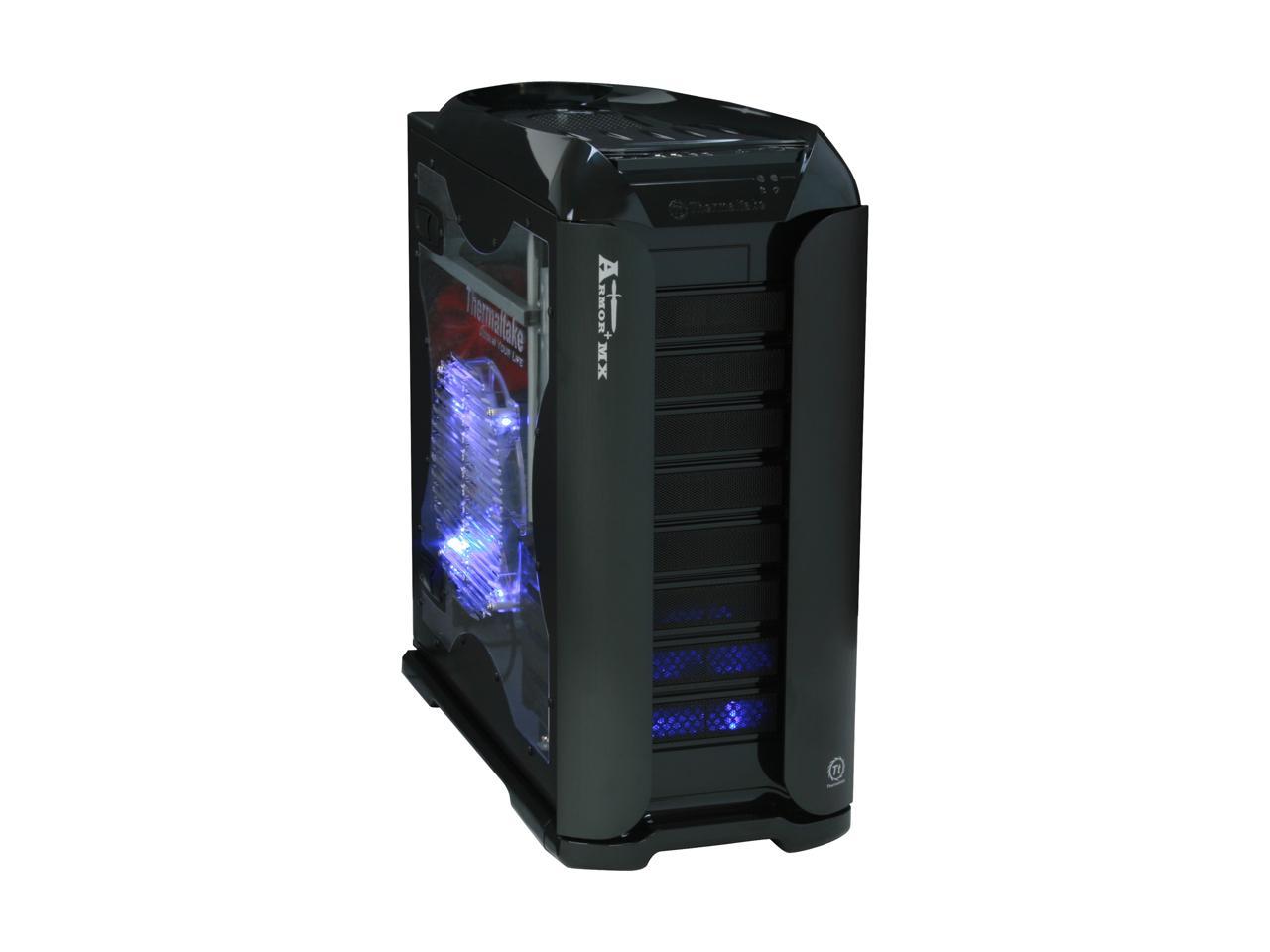 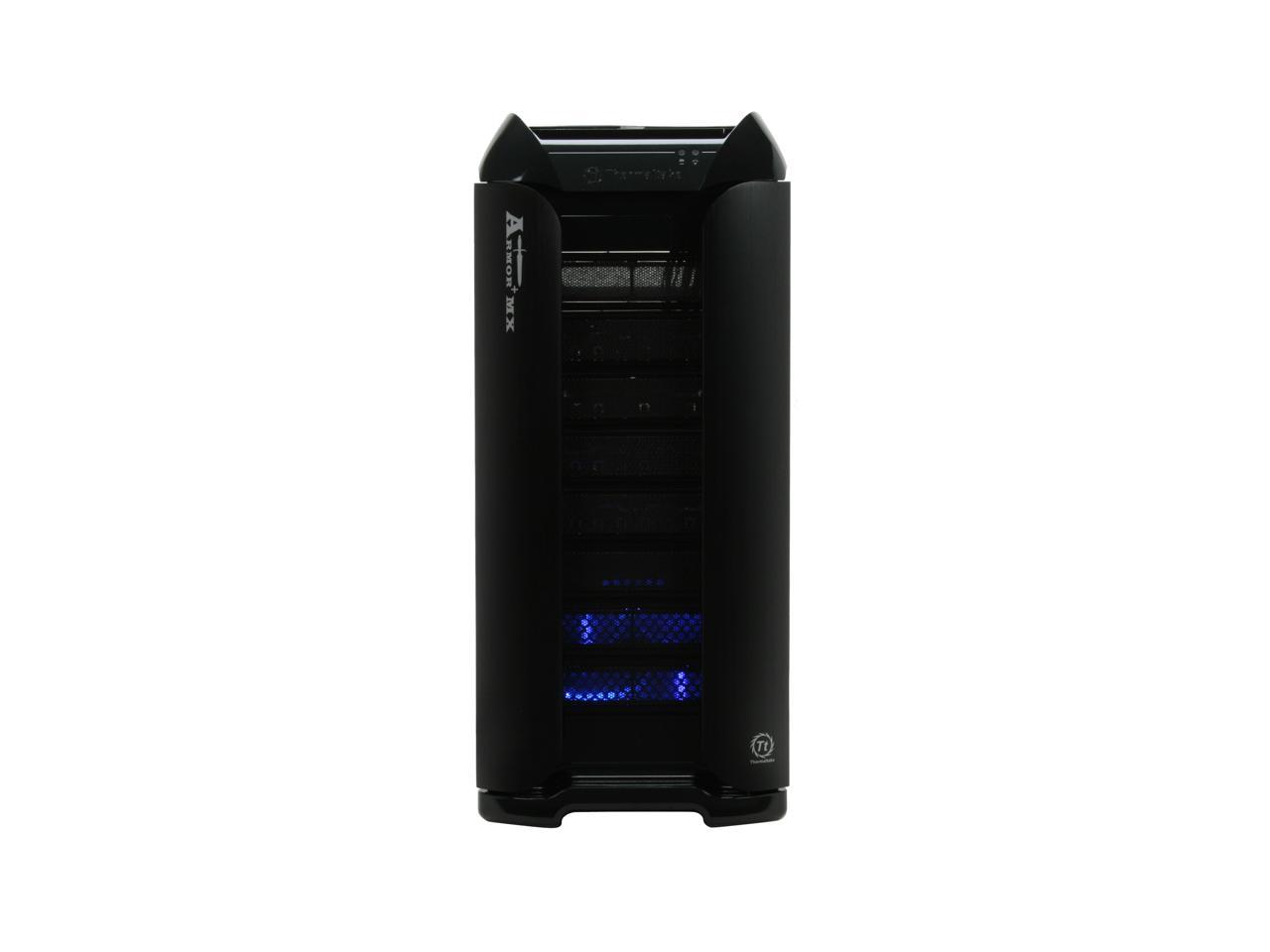 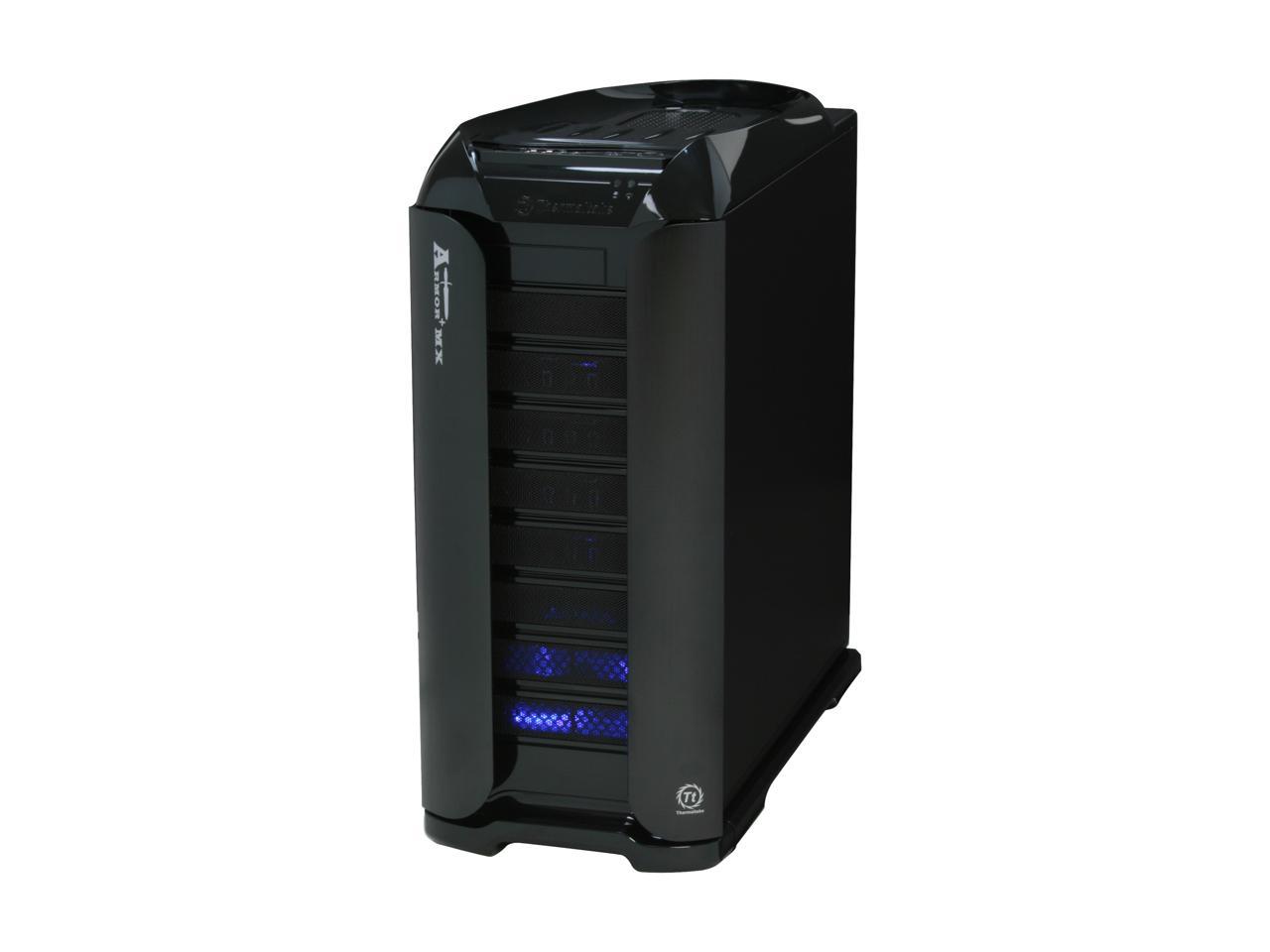 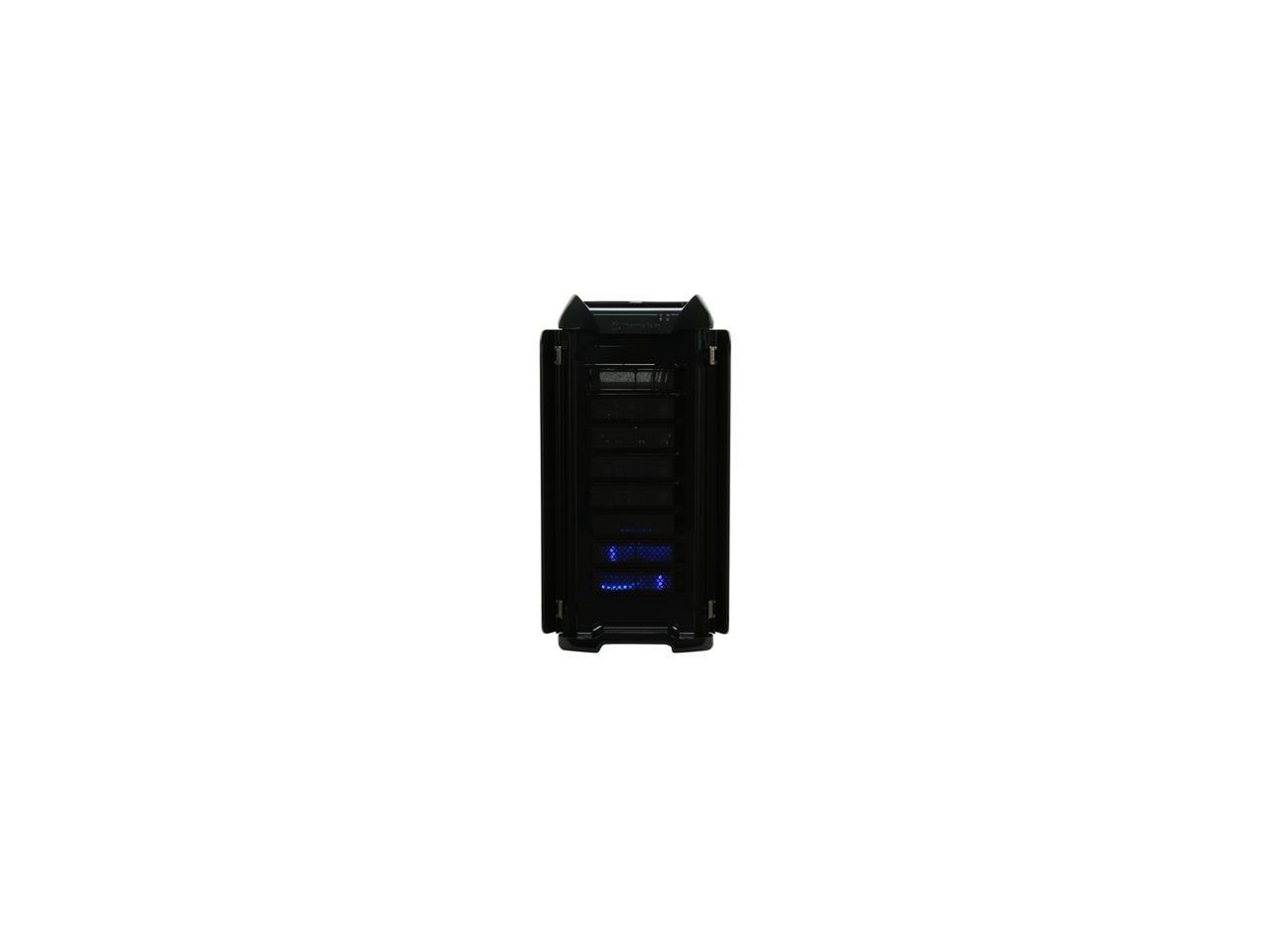 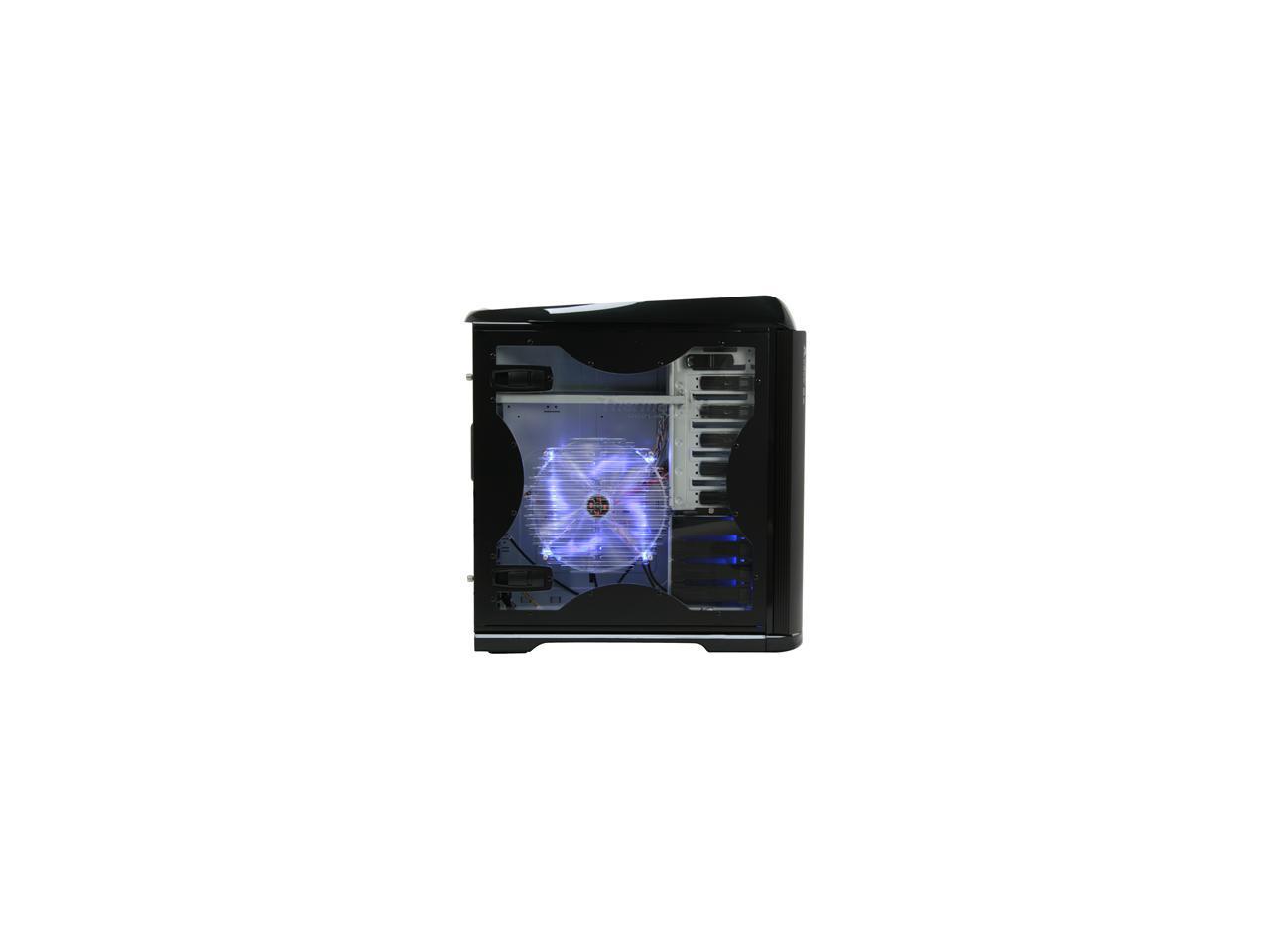 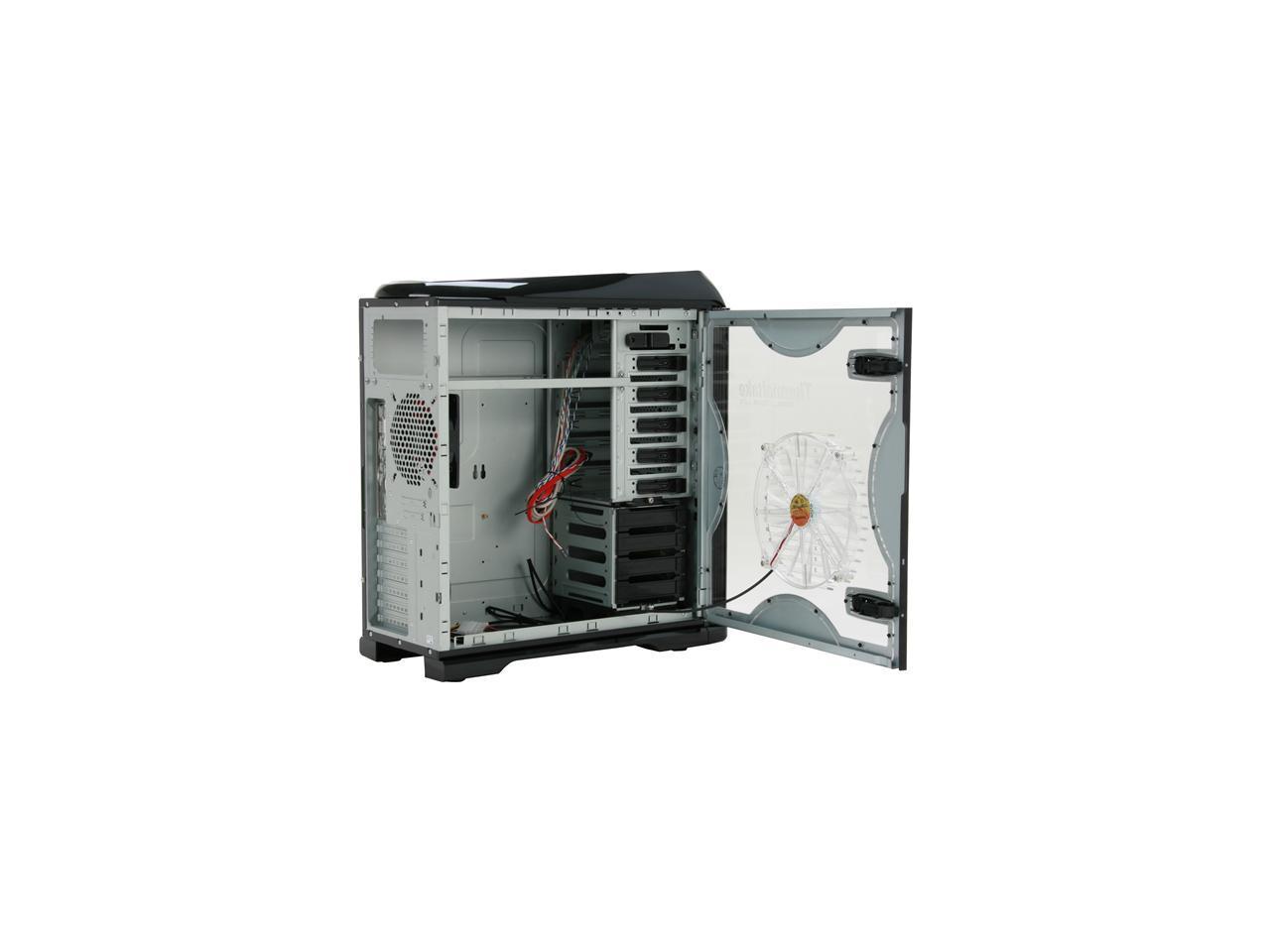 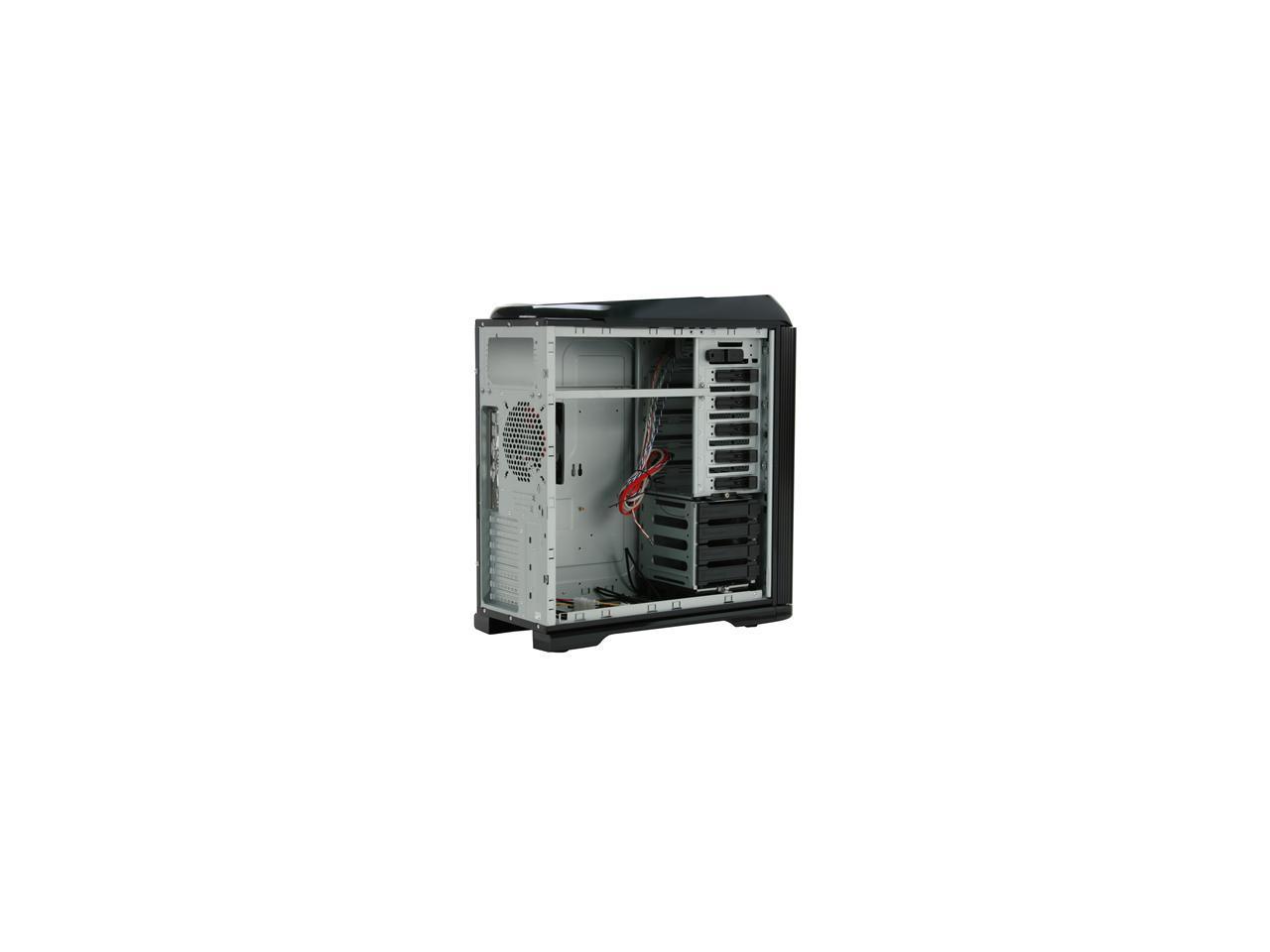 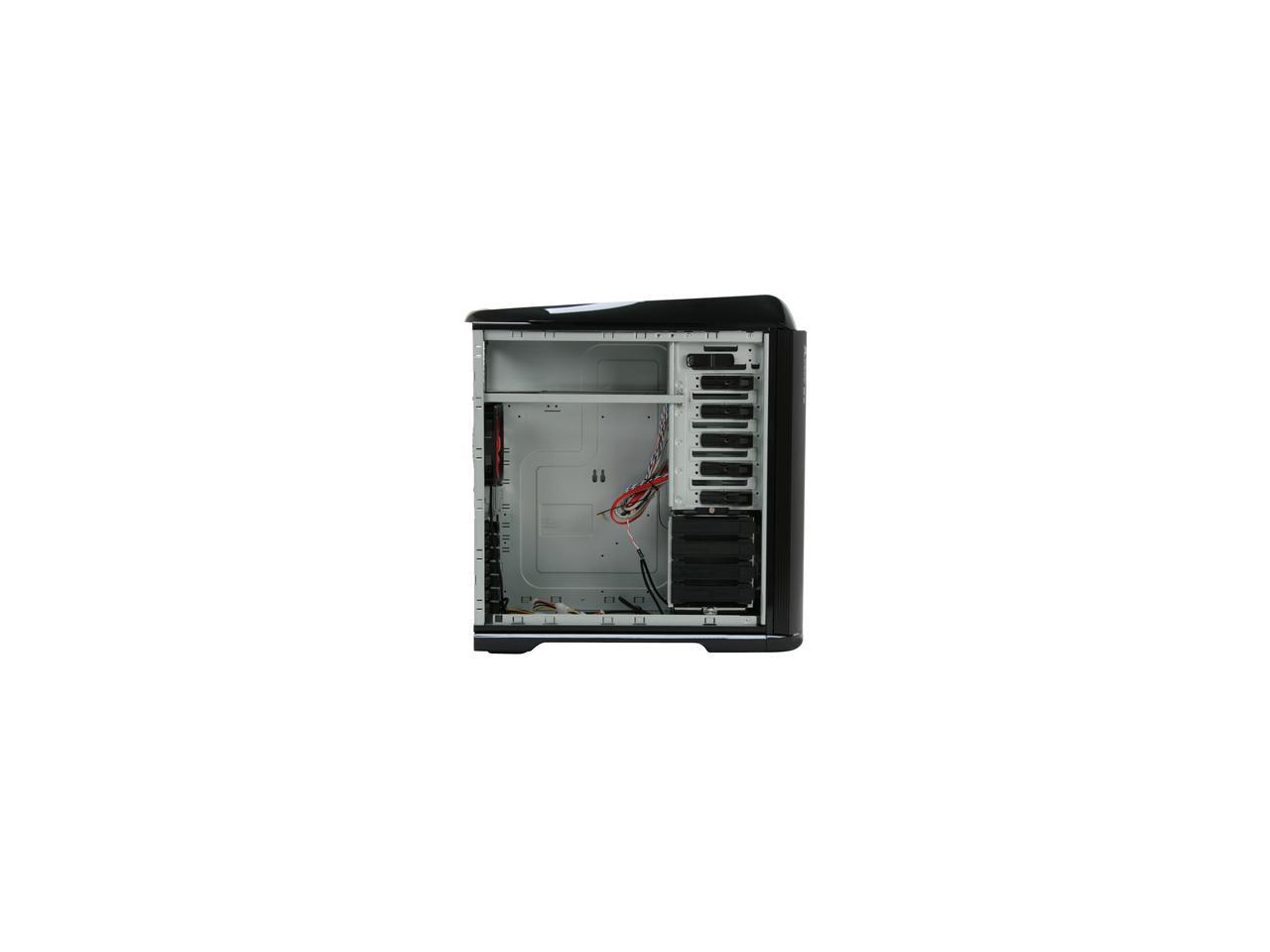 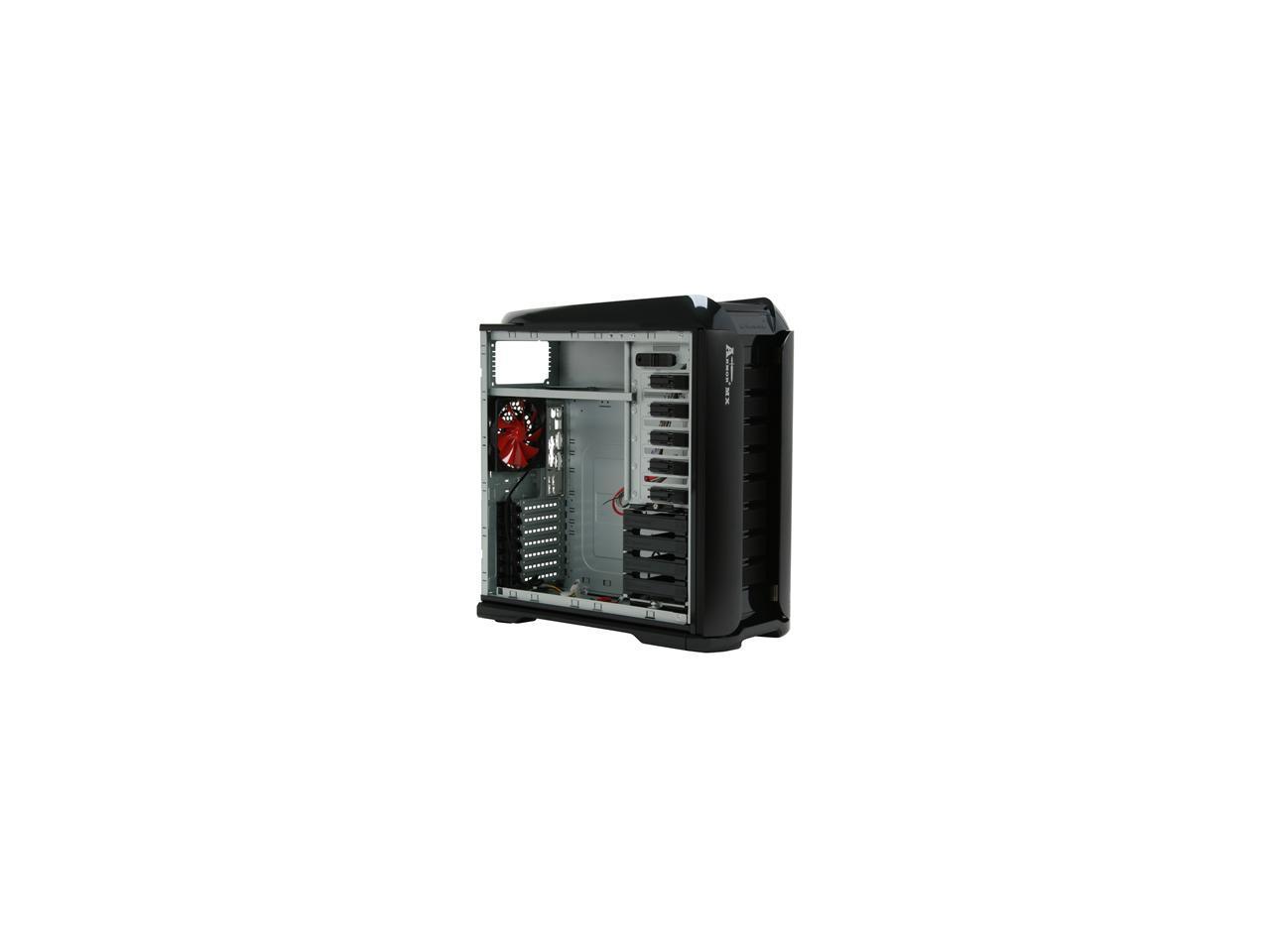 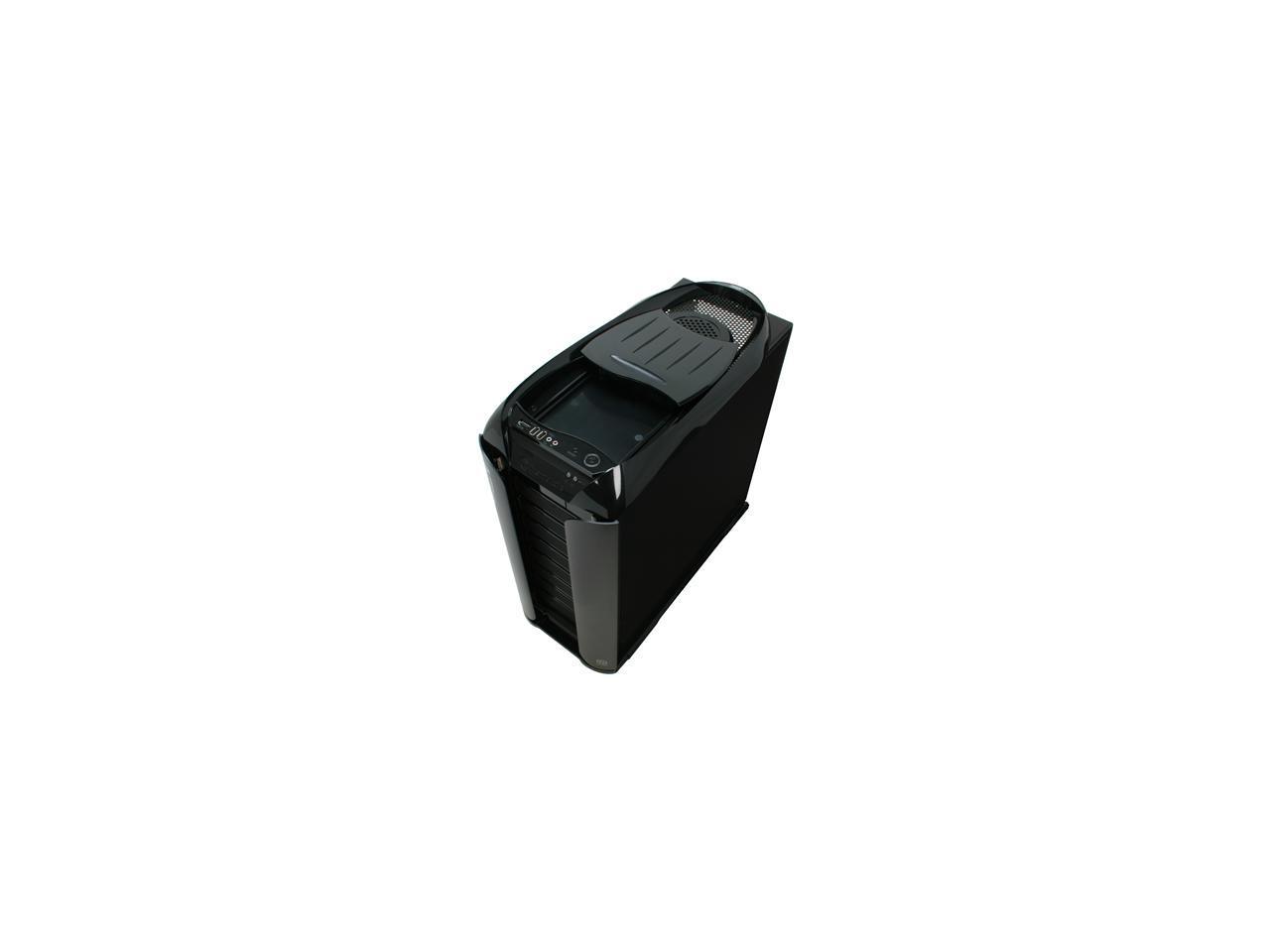 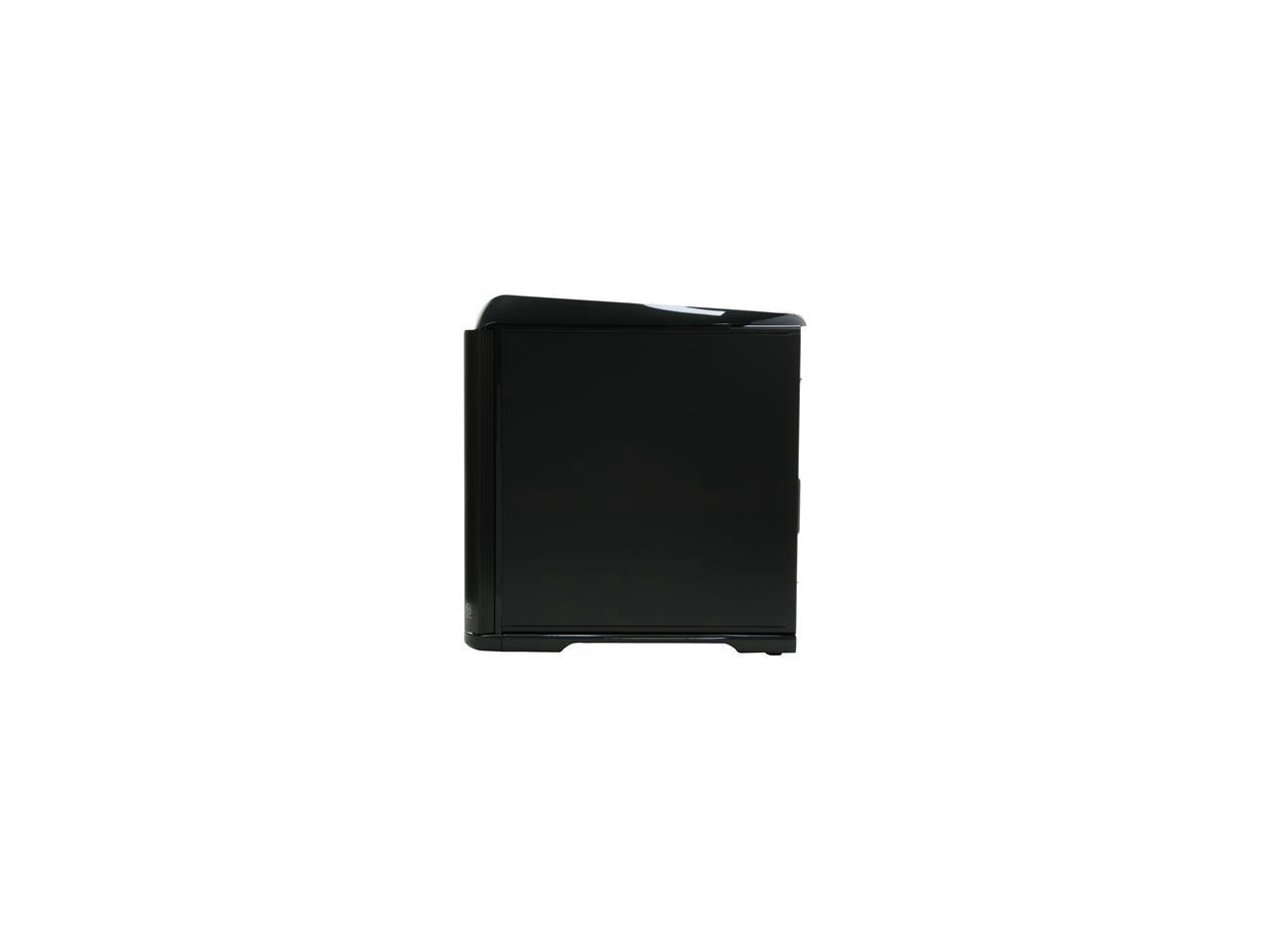 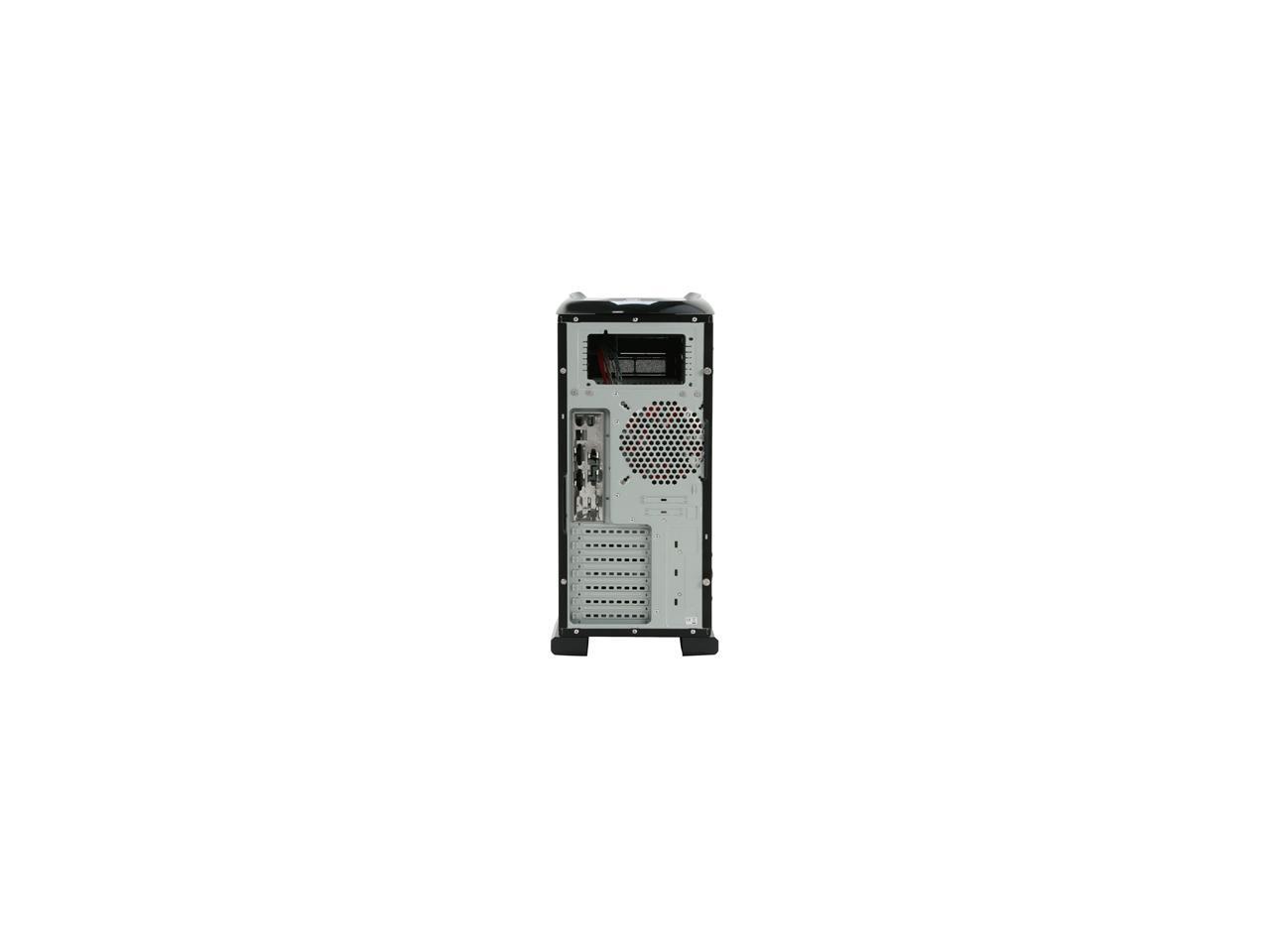 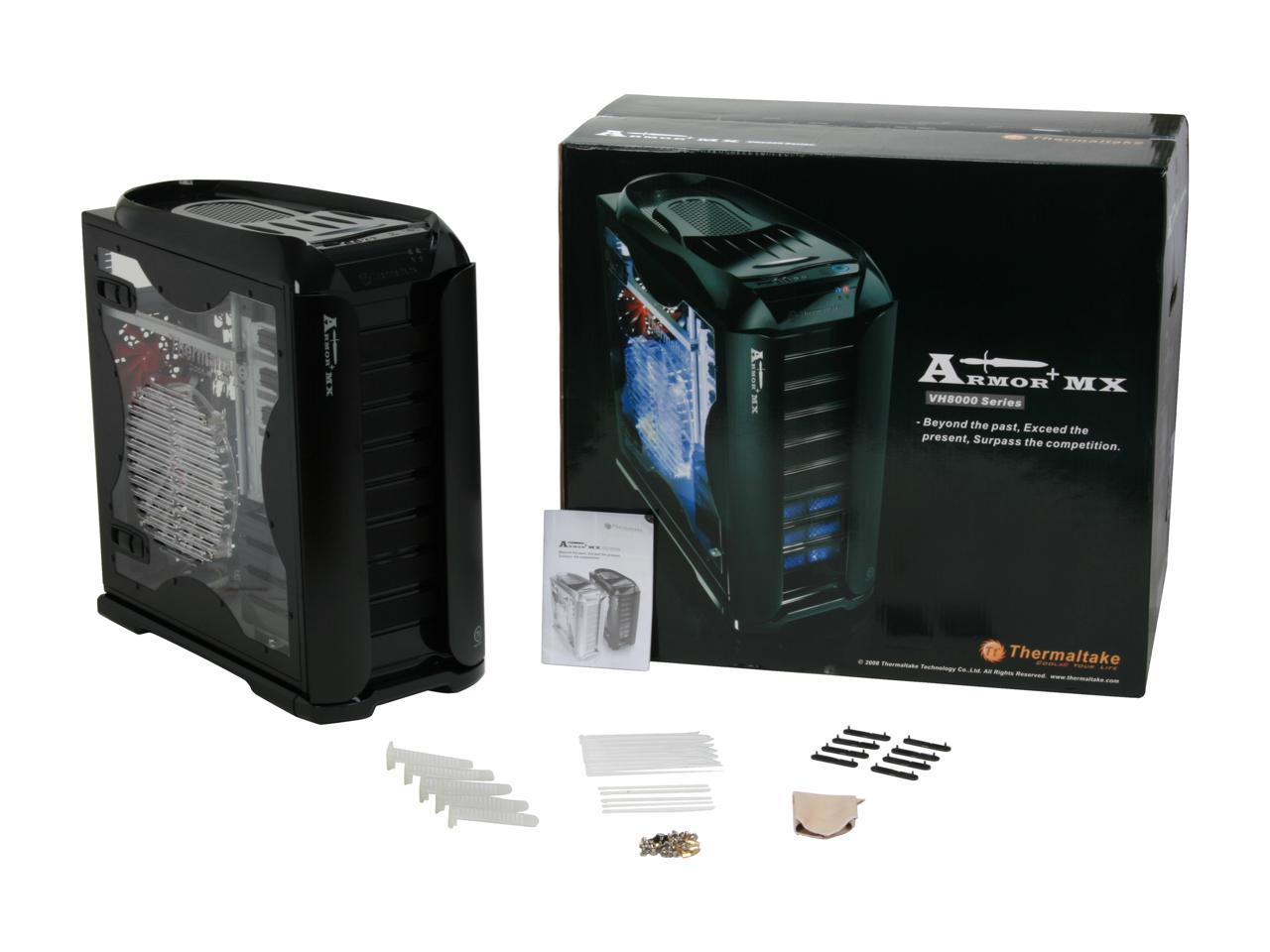 (275) Write a Review
OUT OF STOCK.
Fees for brokerage and duty included in price.
Overview
Specs
Reviews
Thermaltake's Armor+MX VH8000BWS case combines high-end features with a mid-range price to deliver the ability to grow your system over time. This mid tower case supports ATX and Micro ATX motherboards and lets you install seven PCI expansion cards without tools. Up to five externally accessible 5.25" drives and a 3.5" also install without tools in the modularized removable drive cage. One external bay can be configured to accept a 3.5" drive and another four 3.5" drives can be mounted in the internal, removable cage. An adjustable PSU support bridge lets you mount a big enough power supply to take advantage of your components' capabilities.
The case is configured to provide separate cooling zones for drives, CPU and graphic cards. The drives are cooled by a 17dBA 120mm blue LED fan in the front. A massive 230mm blue LED 15dBA fan draws in air from the side to cool the VGA cards and a rear-mounted 120mm, 17dBA fan exhausts the hot air. If additional cooling is needed, the case is configured to take a liquid cooling system. Two USB 2.0 and an eSATA ports are conveniently located along with HD audio jacks at the upper front of the durable SECC steel case.

Learn more about the Thermaltake VH8000BWS

Pros: Yea, this is not built like a tank, but pretty close. You could probably hit this with a baseball bat and not break anything - but I'm not recommending you try. ;-) Plenty of space, and I like the side fan. this is almost like a full tower case, and really this is probably the best value for under 150. Except maybe for the Ant&c 900... It is heavy, well-ventilated, looks sweet, and if you need a sweet case you need to buy this.

Cons: The HD trays are a little annoying. You have to strain to get the cables in the back and get the tray to lock shut. It is difficult to explain, but there is just barely sufficient clearance in the back of the HD tray to allow for the cables. Not a huge deal. Also, the lights are slightly brighter than the landing lights on a 747. Not really, but you need to plan on turning this off at night if its in your room...

Overall Review: In the back of the Guinness book of World Records, there is a disclaimer that reads, "All world records are held by Chuck Norris - the people in this book are just the ones that have come closest to breaking his." And about the case, I personally recommend it to anyone. looks good, very quiet,

Pros: I bought this case without realizing that it's only a midtower...oops! No matter, everything fit (I didn't have to break out the shoe horn, but it was close). I fit a PNY VCG98GX2XPB-OC GeForce 9800 GX2 card, ASUS PE5W64 Evolution mobo(these go in tight, but 2 more would have went!), G-skill DDR3 1600 4 gig, kingwin 1000W power supply, thermaltake 760i bigwater and 2 dvd drives! Phew... it all fit and everything works perfectly! This tower is heavy duty and well worth the money. Looks great, cools well and no issues.

Cons: None. Excellent design and structure. Well laid out.

Overall Review: The case actually allows for cable routing with the metal side compartment removed. This eliminates a lot of mess and helps keep everything looking nice after completion. The hard drive actually mounts at the bottom section, perpindicular to the top bays to aid in cable runs.

Pros: This is a great case! Very stylish, solid, roomy, and everything was in the right place. It comes with cable ties, screws, and everything I needed. Absolutely everything lined up! The blue fan lights add a great effect. I had read alot about it from Thermaltake's website and anxiously waited for its release. Glad I had the patience to wait for it to be released. Great purchase!

Overall Review: The box it came in was really beat up - side caved in, pierced, and top appeared to be re-taped shut. The UPS guy actually apologized before I said anything, saying that’s how it was put on his truck. After opening, I looked in and was surprised how little padding there was and fully expected the case to be dented, scratched and in pieces. I was quite surprised when I pulled it out that it was in perfect condition! Very well built product. My build - Intel Core 2 Quad Q9300, EVGA 780i SLI ATX, BFG 8800GTX, Corsair Dominator DDR2 4x1 GB, Thermaltake 700W PSU, ASUS 20x DVD-+R burner, and Vista Ultimate 64 bit

Pros: Maybe I have a case fetish or something but have had many brands of cases some with many fans and features but I think this is the best quality case that I own. It's HUGE AND HEAVY but quiet and cool with enough fans to keep most mobos cool. The door fan would power a helicopter but it's very quiet.

Cons: If you have a bad back or a hernia, I would get a lighter case, it's heavy. No cons otherwise.

Overall Review: At the current price it's a steal andd I think you'll be pleased.

Pros: All around quality. From the materials used to the way it's put together, it's the absolute epitome of quality manufacturing. The cable management system is extremely well-done. I can barely see any of my cables, because they're threaded behind the 5.25" Bays/HDD cage. The fans (especially the 230mm side-fan) provide excellent cooling. My ambient temperature dropped almost 15c from my Centurion 5 case. The internal space is comparable to a full-tower case. Because the HDDs slide directly into the cage, there's ample room for some of the larger video cards (I've got 2 GX2s right now) The tooless design is done better than any other I've seen. Also, this case is very light for the materials used.

Cons: Some of the edges inside the case, particularly around the HDD cage, are rather sharp, so be careful.

Overall Review: If you're like me and prefer a smaller, more portable design with the same 'umph' and featureset as a full tower, along with the excellent craftsmanship that you would expect in the case that holds your pricey investment, this case is the one for you.

Pros: This is my first PC build from scratch and I must say I'm quite satisfied with this case! The case fans are very large and definitely provide excellent airflow. The hard drive cage is removable and completely tooless (as is pretty much everything else in this case)! As for the reviewer mentioning his hard drive seemed a little loose in the cage but hadn't checked the plastic parts that came extra, there are actually brackets that clip into the HD tray and the area where screws would normally go to secure the HD to a tray. Very nice feature! The case is certainly quite roomy, and there's plenty of space behind the HD cage and, potentially, behind the 5.25" drive bays to route wiring. The windowed fan side is completely removable, though it would have been nice to see it swing out on a hinge.

Cons: There's only room to support video cards up to about 10.5". I'm not entirely sure how big the newer cards are, almost had a heart attack when I thought the MSI Radeon HD 4850 I wanted might be too long, but if the card is 10.5" long, it's going to be sitting against the side of the HD cage. One other gripe I had, coming into this as a newbie to building PC's and basically not knowing anything other than what I'd researched online, is that the connectors from the front IO, power LED, System LED, etc, were NOT labeled as one side being + and the other being -. When I went to plug this into my MB, I didn't know which way they were supposed to go. One side has an arrow pointing up and the other had a "G". I guess I got it right because when I plugged up the system to check the lighting, everything was lighted alright.

Overall Review: This is just a beautiful case. The drive bays are meshed for airflow where there are no drives currently, the fans are large and offer excellent airflow. The top mesh area is nice, but mostly blocked by the psu inside the case, so I'm not sure how well airflow will be in or out of that. I like the accessories box on top, it's holding the extra screws and things (which Tt definately put ALOT of extras for ya :) ). The front doors are alright, best feature is that they have magnetic knobs to stick to the front of the case so they're not freely swinging around. Everything, even the expansion slots on the back, are tooless and easy to manage. I just can't wait to order the cpu, cpu fan, and video card to put in this monster! One thing to note, the case fans are powered by the PSU, not the MB, so I guess unless you get some type of adapter, you can't regulate the speed, but in any event, the 230mm fan on the side was VERY quiet anyway, so I don't see that as being a problem.

Cons: -The removable hard drive tray takes up a good bit of room, I had to fit a GTX280 in the case and it was almost right up against it. I took the drive tray out and bought a thermaltake icage(sold separately) to place farther up and it worked out perfectly for the graphics card and hard drive.

Pros: LOOKS GREAT! Runs cool. Fits everything that I want to put in and is VERY QUIET!

Cons: Not really a con... While I wait for my new motherboard and other parts I put my old HP 370N MicroATX board in just to use the case. The pins for the Power LED are spaced apart so I would have to re-pin it.... sad day... Space is kinna tight for wiring. I have a Corsair 750W non-modular and I am not yet seeing how I am going to run all these cables!

Overall Review: When I build my NEXT computer in 09 I will likely go with a full tower versus this mid. I love the style and tower itself I will prolly just want something bigger though.