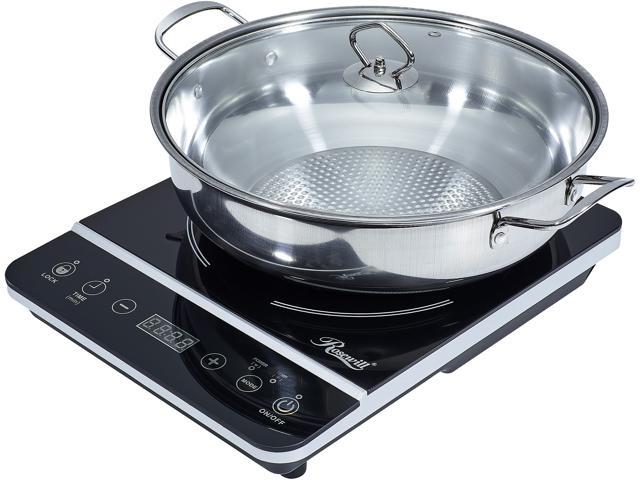 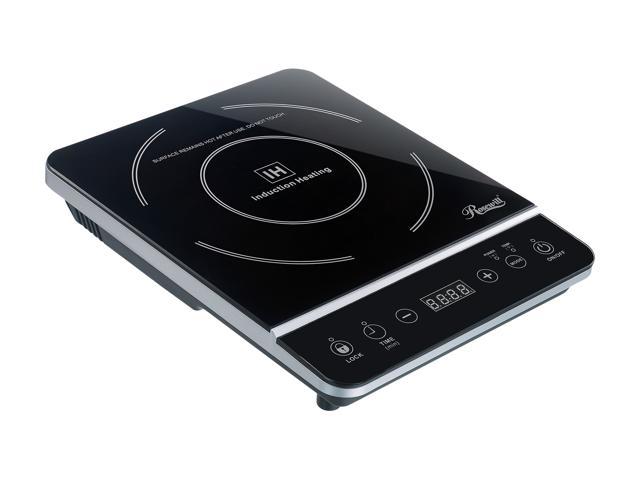 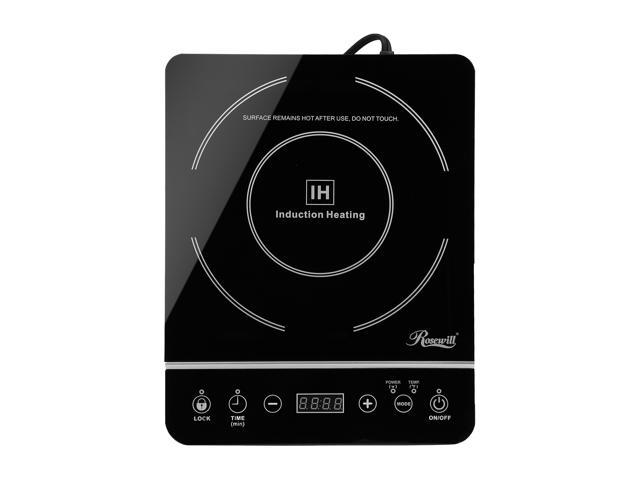 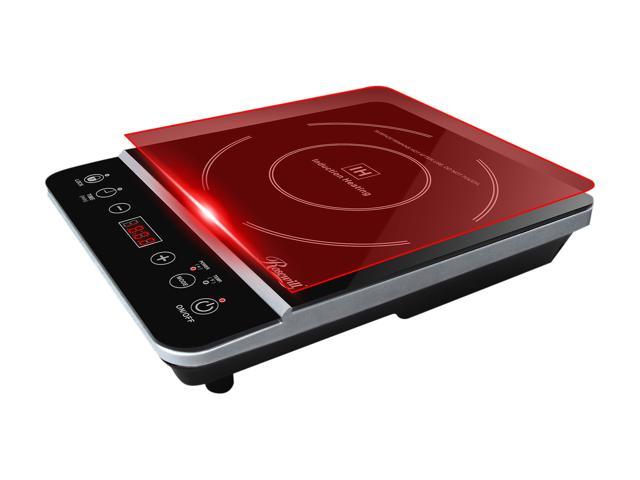 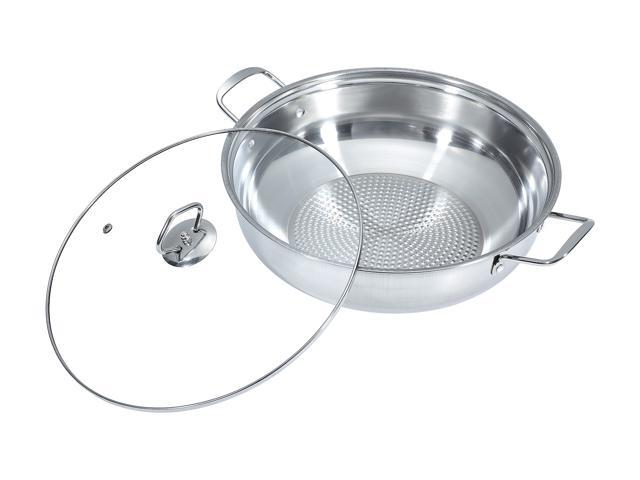 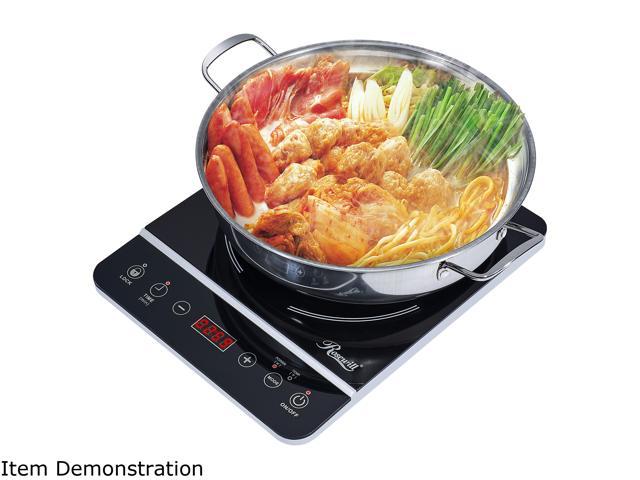 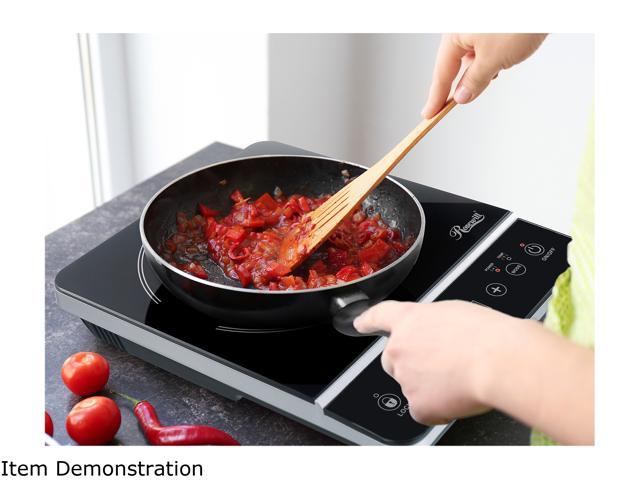 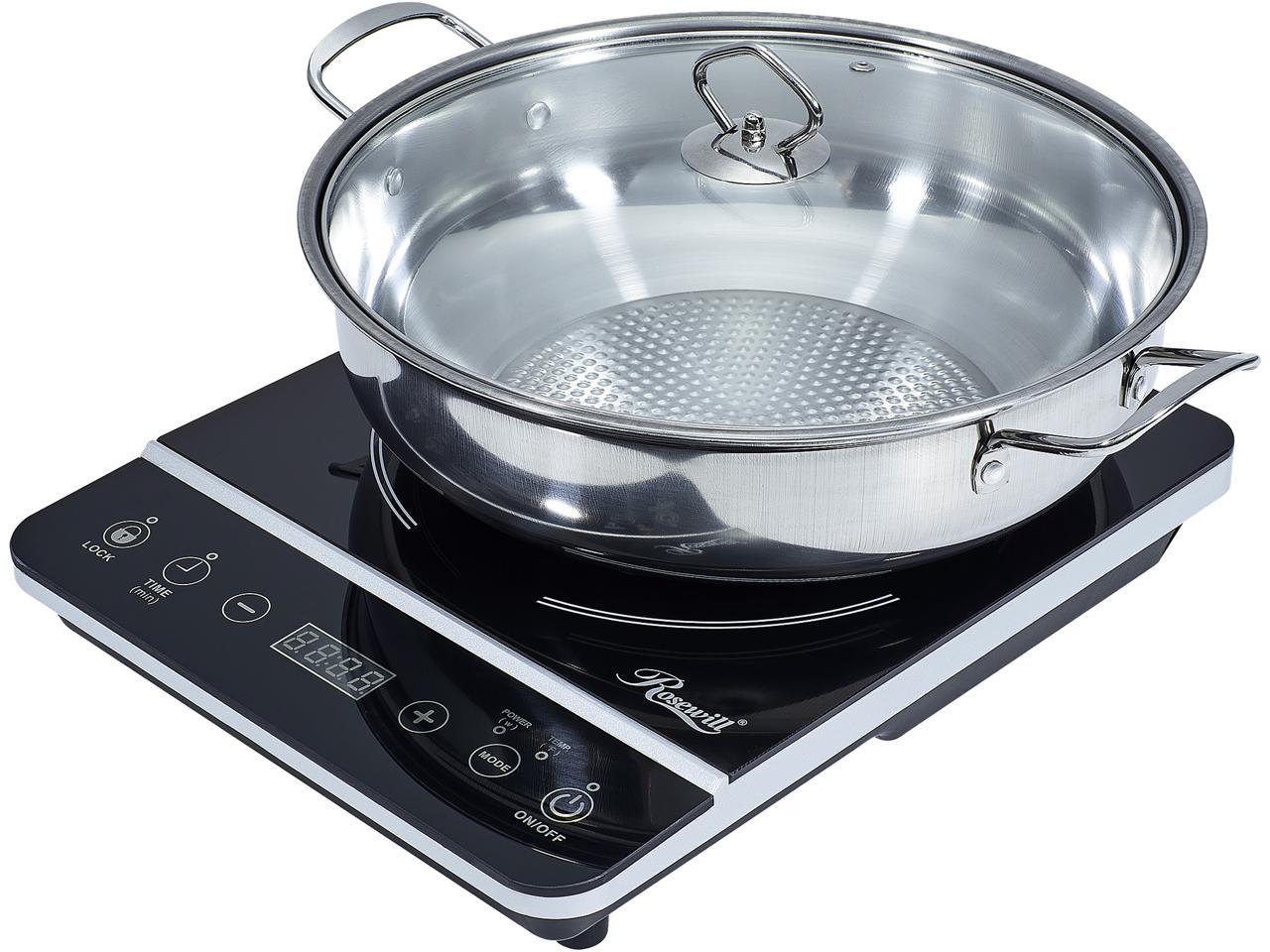 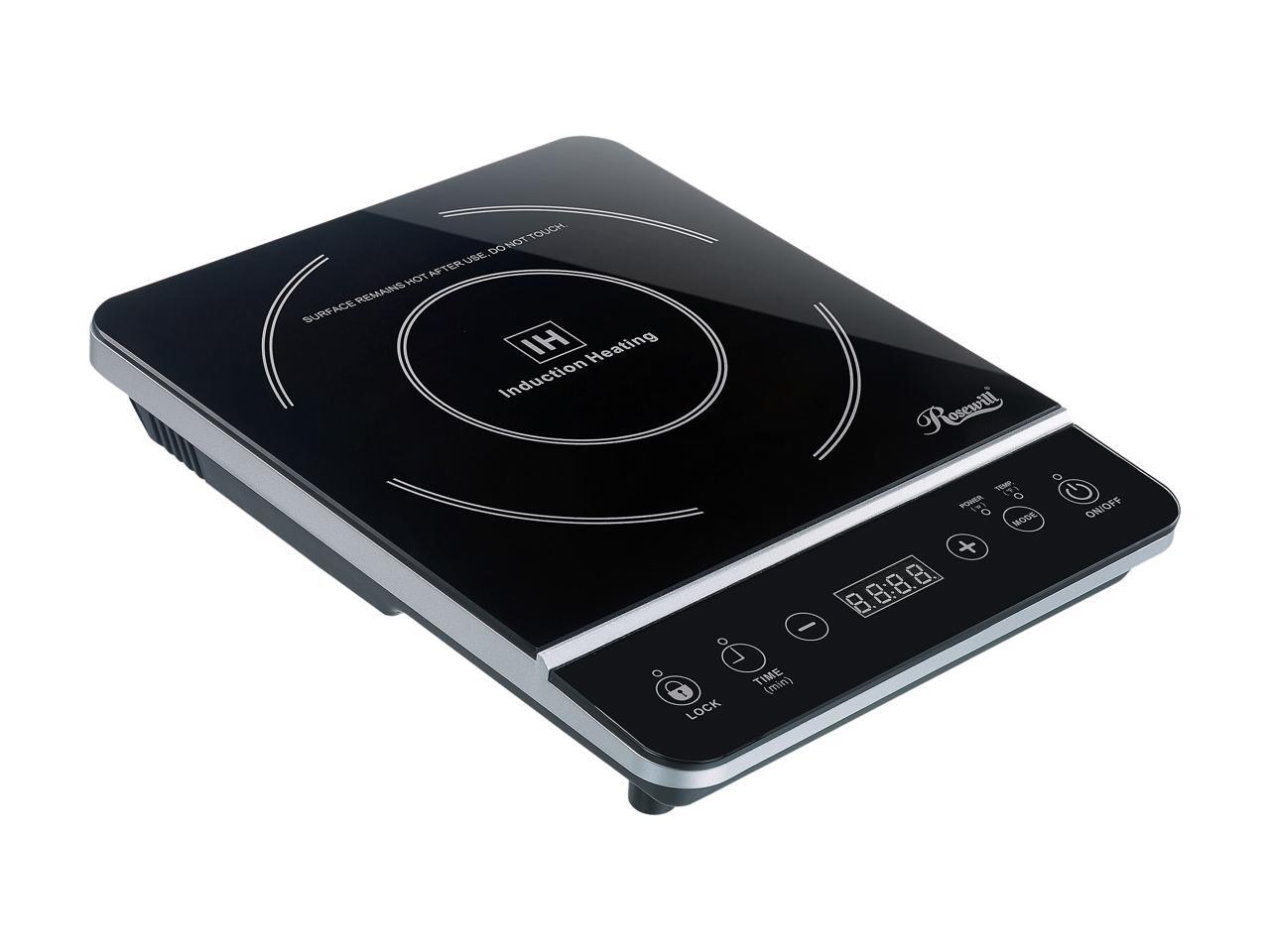 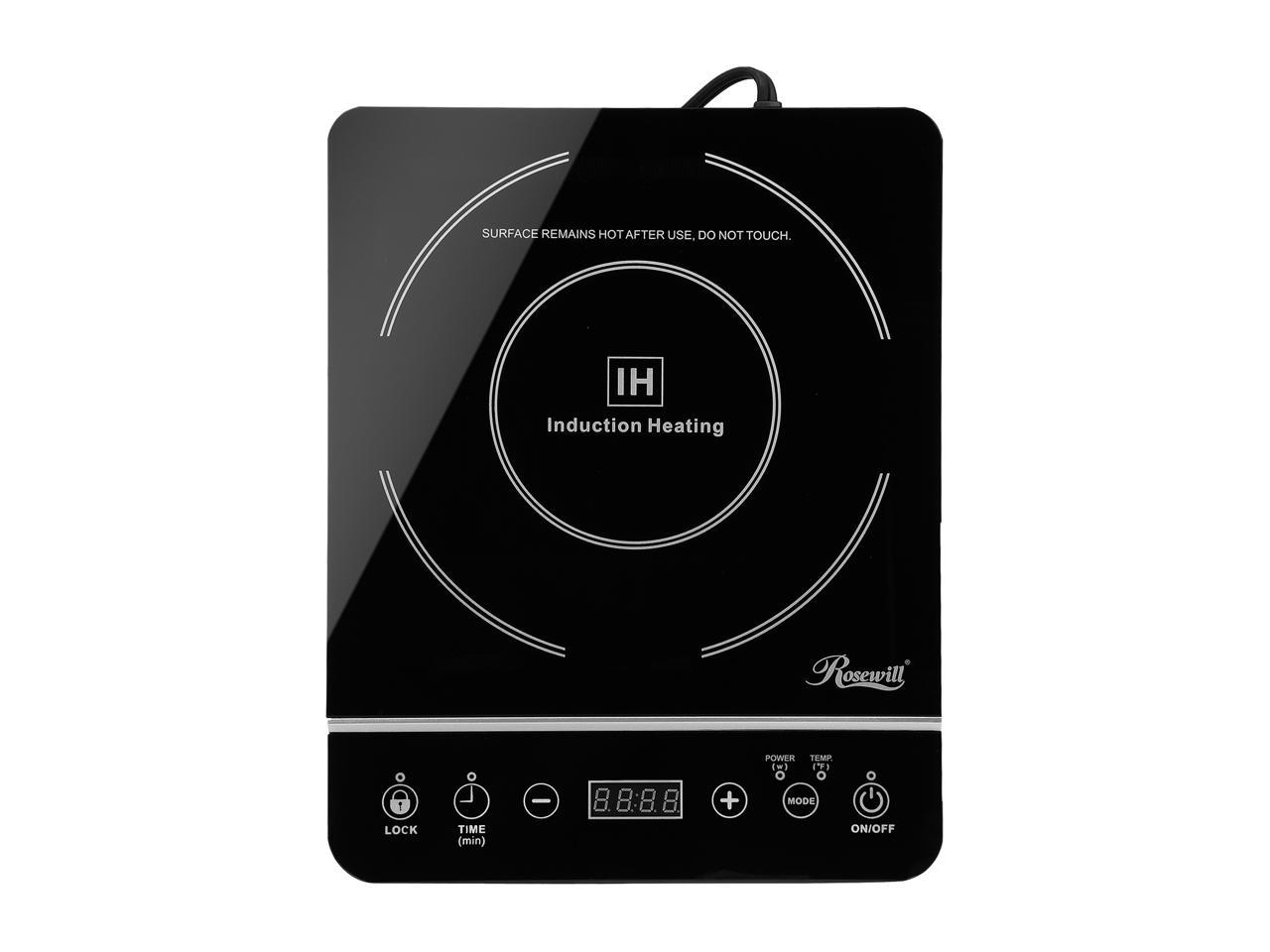 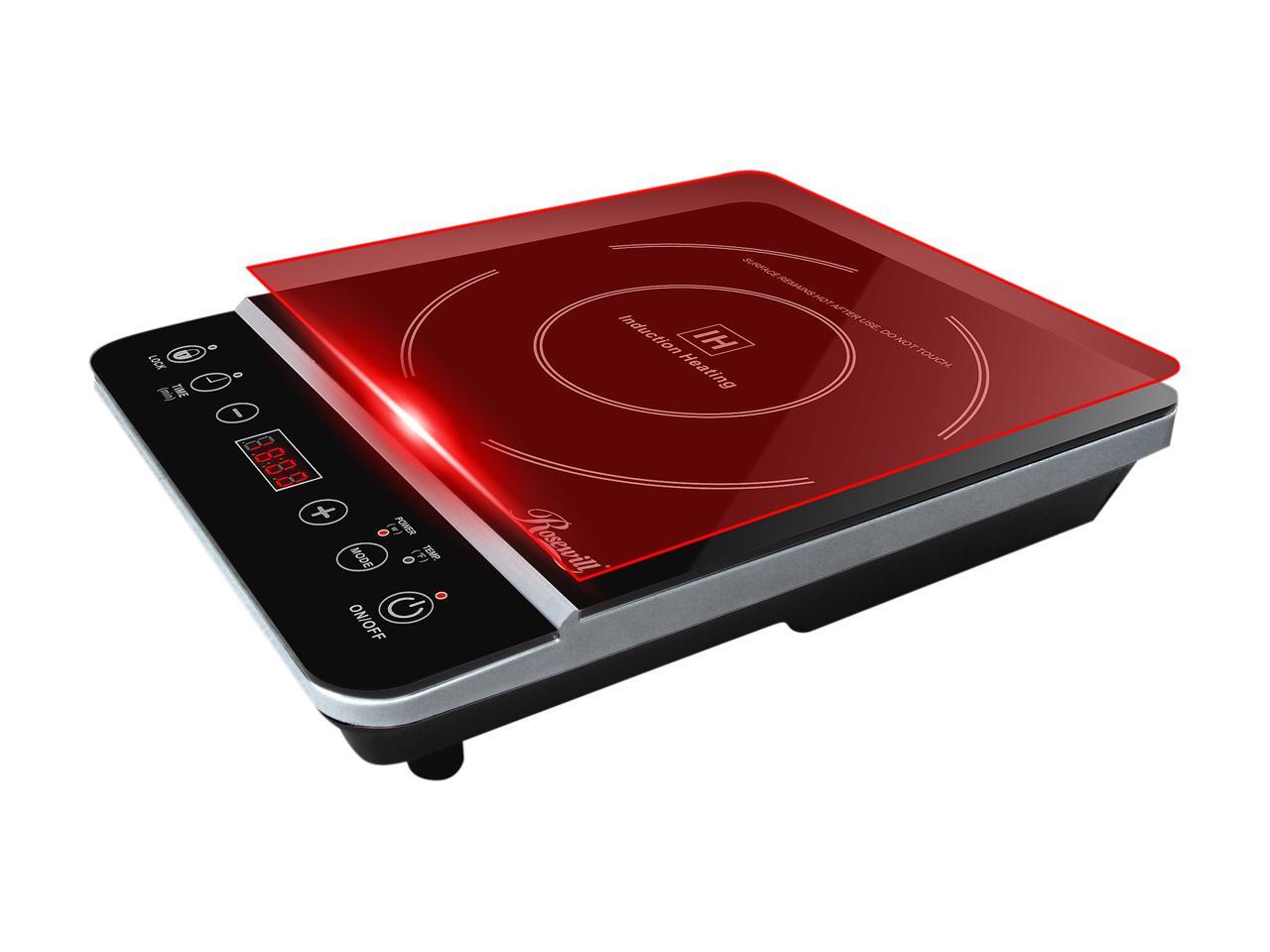 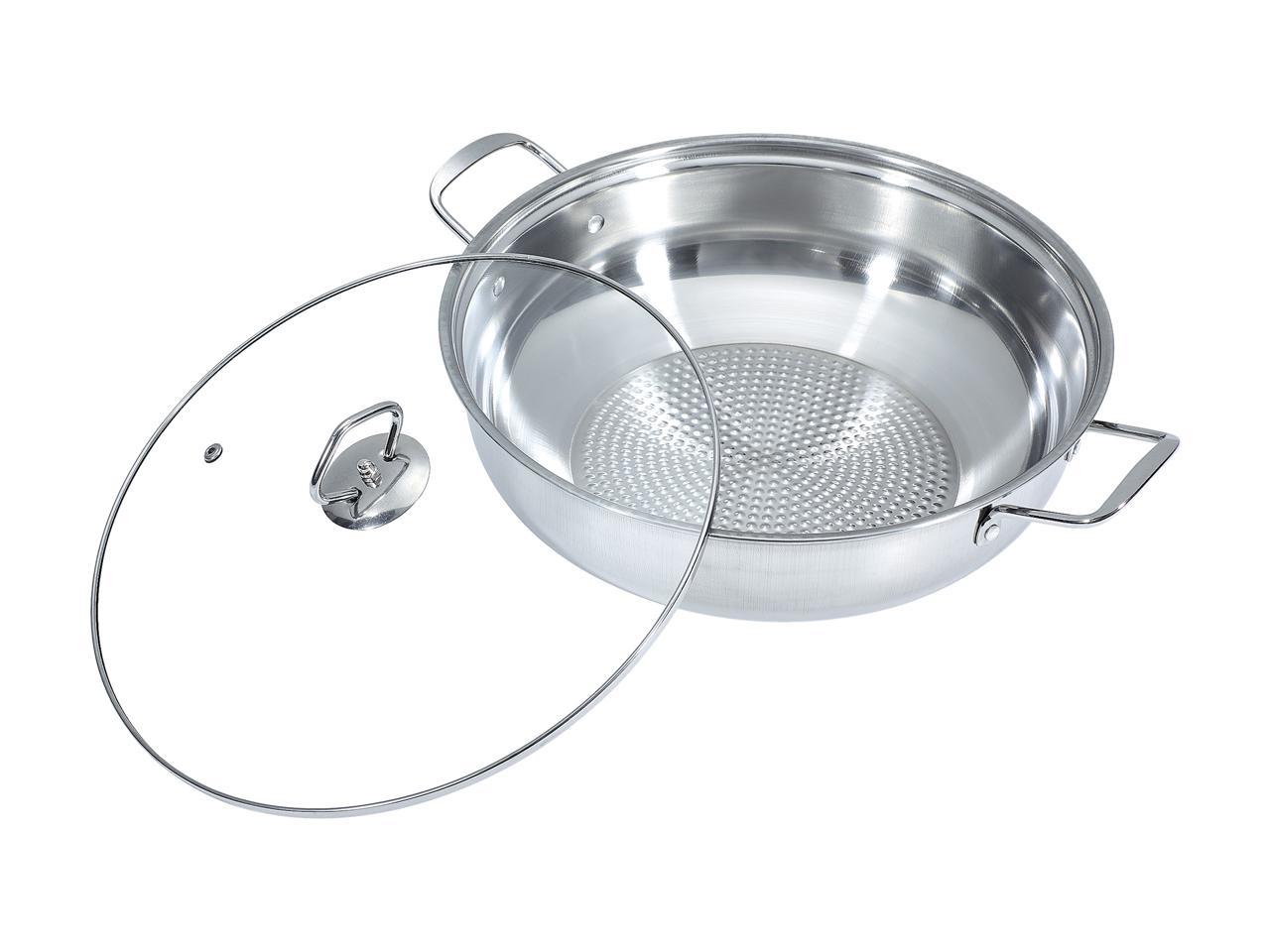 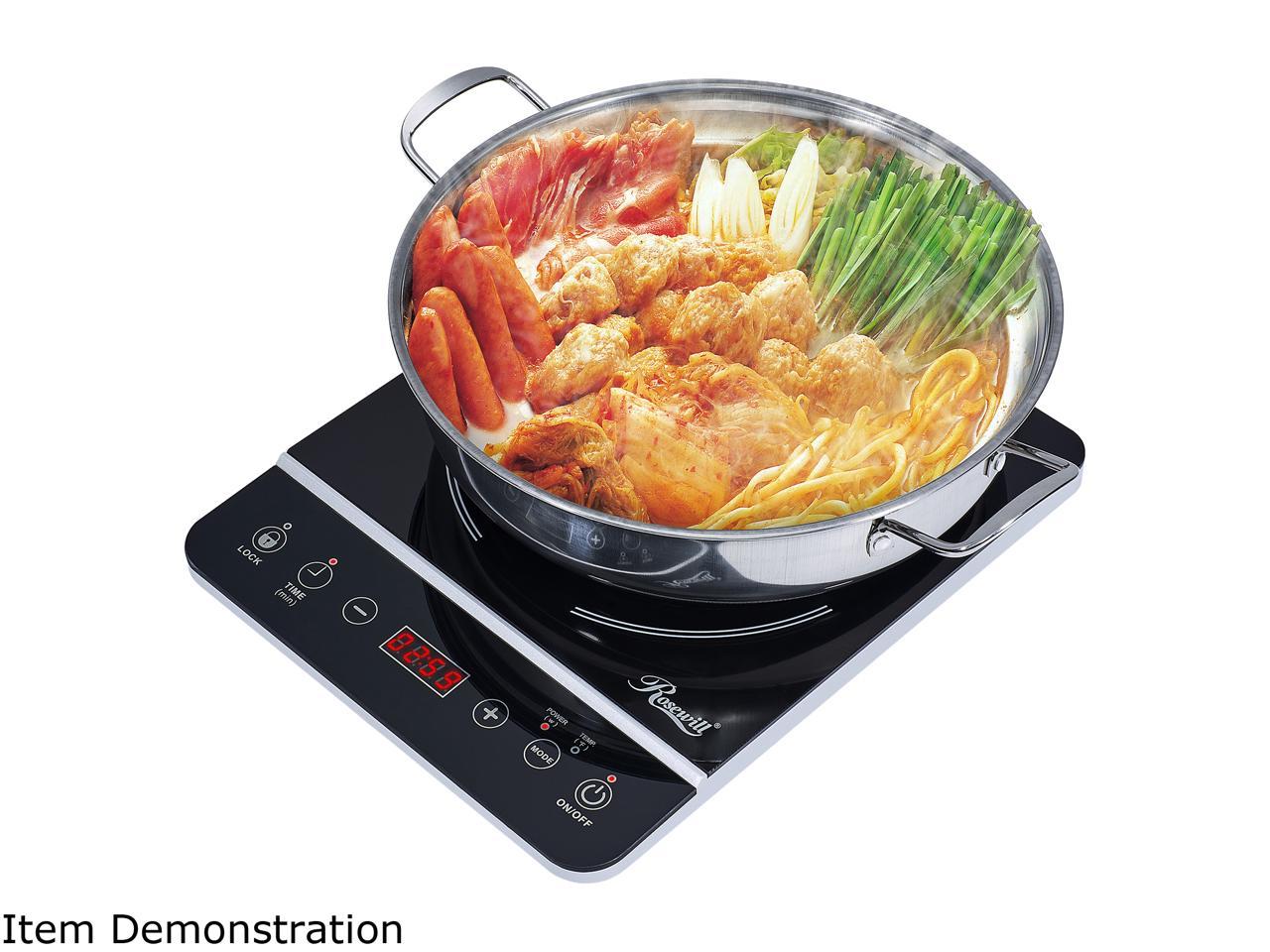 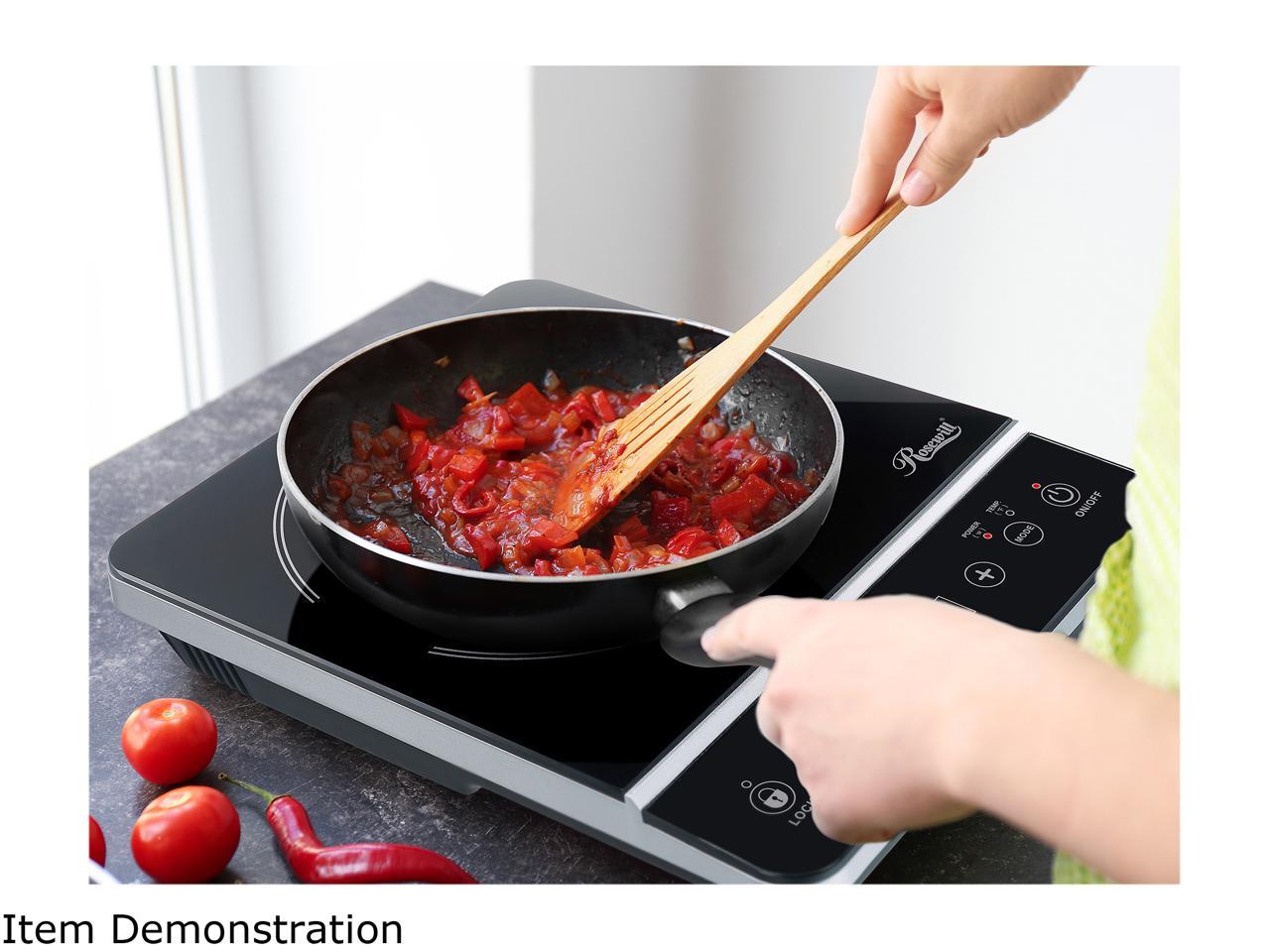 (129) Write a Review
See more "Rosewill"
OUT OF STOCK.
Fees for brokerage and duty included in price.
Overview
Specs
Reviews Intuitive large LED display screen for setting up power and temperature levels as well as timer of your choosing.

Select power wattage from 300W to 1800W as per your cooking needs to keep warm or stir fry with better energy consumption than conventional cooking method.

Choose the right cooking temperature from 150°F to 450°F to retain healthy nutrients and savory flavors and serve appetizing dishes with ease for family/ friends. If the included induction test magnet sticks to the bottom of cookware, it is induction compatible and ready to use with the polished crystal plate. Induction cooking eliminates wasted heat compared to traditional gas cooktops. With no traditional heating element included, this cooktop stays cool, increases its efficiency, and reduces the risk of getting burned. Press to set the desired cooking time from 1 minutes to 2 hours and 59 minutes when a specific cooking mode is selected. Activate to prevent accidental button presses or changes while the burner stove is in operation. To cancel, simply press and hold the Lock key again to unlock. Begin making meals with the included and versatile stainless steel magnetic pot. It is also compatible for cooking with traditional gas and electric stoves. Pros: - Timer starts at 0, so it's easy to add a few minutes instead of holding it down until it rolls over. - Goes down to 100 watts on duty-cycle, so it's good enough to sous-vide. - Fan is a little quieter than the outgoing model. - Instant heat on and off, like gas. - Despite being rated at 1500 W max, it boils water about as fast as my 1800 W unit. It took about two minutes for three cups of water, and they both reached a boil at nearly the same time. A proper 1500 W kettle would beat both, though, if you need speed.

Cons: - The programming could be improved. It could keep the fan slower and quieter if it wasn't as hot, for instance. - When I'm cleaning it, a damp cloth will activate all the buttons. This is where I'd like the fan to realize it's not hot.

Overall Review: I've been using the 16001 (https://www.newegg.ca/p/N82E16896268111) almost exclusively for the last couple years. This one is slightly wider and deeper, but is nearly half as tall. The fan sounds a little better, and the top is now all one surface instead of having that plastic spacer near the front that would inevitably be melted by a hot pan. The last model could go down to 700 watts before it started to cycle on and off, and it would only be able to get down to 300 watts with cycling. This one can go as low as 500 watts without cycling, and can reach 100 watts. This will actually hold the water at a specific temperature perfect for sous-vide cooking. (It will still need some manual adjustments, but it's a whole lot easier than trying to do it at 300 watts, which was enough to eventually heat the water to a rolling boil). Something about the sound as it clicks on and off sounds cheaper than the last model. It also has a greater tendency to squeal at the higher powers, though that subsides once you get it seated right. The pot also vibrates slightly, about as much as the last model. The LEDs are all below the top ceramic instead of having their own little windows. That makes the look cleaner, but it gives them an interesting hexagonal rippled appearance. Still readable, so I like it. 9/10, would use four of these to make a $320 knock-off induction stovetop range.

Overall Review: Purchased this for $49 here, and it's a good deal, even if you choose not to use the included pot. Works great with my cast iron cookware, which heats up significantly faster than on an electric cooktop (seconds vs. minutes). Searing and browning meats is easy with 1800 watts of power. Defaults to 1200 watts on start, which is a good power level for *most* cooking calling for "high" heat. Obviously, controlling temperature with cast iron is a little harder (as would be the case on any cooking surface), but with stainless steel pots/pans, the temperature adjustments result in almost immediate response. It's the next best thing to having a gas stove. This also means that if you use electric cooktops today, your cooking habits have to change, or you'll find that you can easily ruin your food and even your cookware. Many have commented on the loud fan, and it is noticeable, but not terrible. You can have a normal conversation over it. Are there quieter ones? Sure, but not for under $50, AFAIK. Note that at 1800 watts, you'll be right up against the max limit of a 15 amp circuit; you should use a 20 Amp outlet if available. If this will be your first portable induction cooktop, you won't be disappointed.

Overall Review: Many complain about noise. All I hear is the cooling fans, and they are not very loud. I really like this machine.

Pros: Good wattage, fast heatup and ease of control, Best and most durable control pad I have seen

Cons: A bit noisy, but with a higher wattage and the fact that I like to use cast iron I am happy to deal with it. (2 yr edit) Largest con I find is that the temps are in jumps. If you want to do candy or other precision tasks this device will not be suitable.

Overall Review: (2 yr edit) Durability has been exceptional, the last one we had lasted about 6 months. This one is now 2 years old and still strong.

Pros: - Lightweight and portable - Easy to clean - Heats well, and from what I can tell evenly

Overall Review: My coworkers and I use this in our "break room" every day for lunch (typically a wok stir fry). After one week of use it has been great!

Cons: Will not work long enough to boil water. Stayed on for about 4 minutes before it shut off and gave me the e2 error (internal overheat). Shut it off, let it cool down and started it back up, this time the e2 error showed up only after about minute and a half. And I was using the supplied pot that came with it. Not happy at all, I am returning.

Manufacturer Response:
Dear Valued Customer, Thank you very much for purchasing this unit. We strive to provide the most reliable and highest quality products to our customers. Thanks for the feedback we will pass it along to our QA and Design teams for further investigations. In the event that you are having troubles please do not hesitate to contact our support team at the number below. Phone: 1- 800-575-9885 Email: rma@rosewill.com Email2: techsupport@rosewill.com We look forward to hearing from you. Thanks, Rosewill Customer Care
Anonymous
Ownership: more than 1 year
Verified Owner
Better away from it5/16/2017 3:06:40 PM

Cons: it starts not working about a year usage

Manufacturer Response:
Dear Valued Customer, We are really sorry to hear that and do understand your frustration; but this item is already over its 1-year manufacturer warranty; we do care about your feedbak and will continue improving our products in future. In case you need any other assistance or have any other questions, please contact us and the contact information is below: Phone: 1- 800-575-9885 Email: rma@rosewill.com Email2: techsupport@rosewill.com Thanks, Rosewill Customer Care
Rapheal G.
Ownership: 1 week to 1 month
Verified Owner
Cheaply made junk7/31/2014 5:51:10 PM

Overall Review: So after using this for literally 10 mins it broke. I brought it left for a trip got back and tried it, it boiled water pretty quick so I'm like cool, then it gave me an error E0 akin to a death song, now it won't go away. And I have to pay for shipping there errgh.

Manufacturer Response:
Dear Valued Customer, Thank you very much for purchasing this unit. We strive to provide the most reliable and highest quality products to our customers. Please contact our support team to assist you with warranty options. Phone: 1- 800-575-9885 Email: rma@rosewill.com Email2: techsupport@rosewill.com We look forward to hearing from you. Thanks, Rosewill Customer Care