OUT OF STOCK
Sold by: Newegg
Shipped by Newegg
This item is currently out of stock and it may or may not be restocked.
Out of Stock
Add To Wish ListFound on 12 wish lists 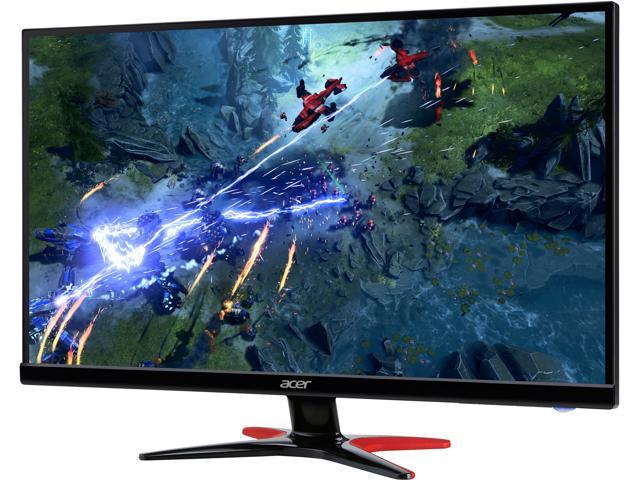 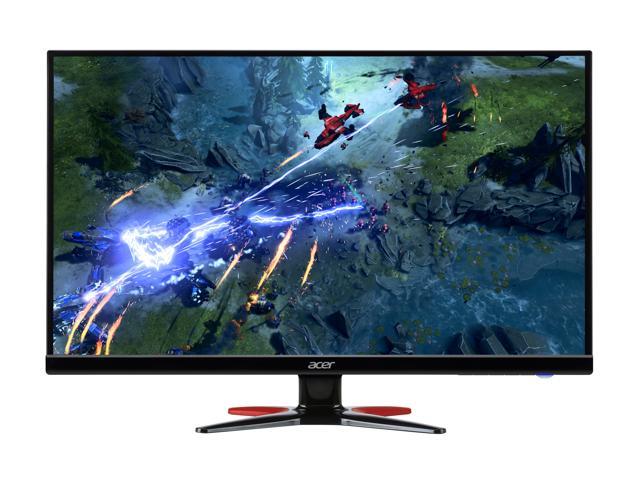 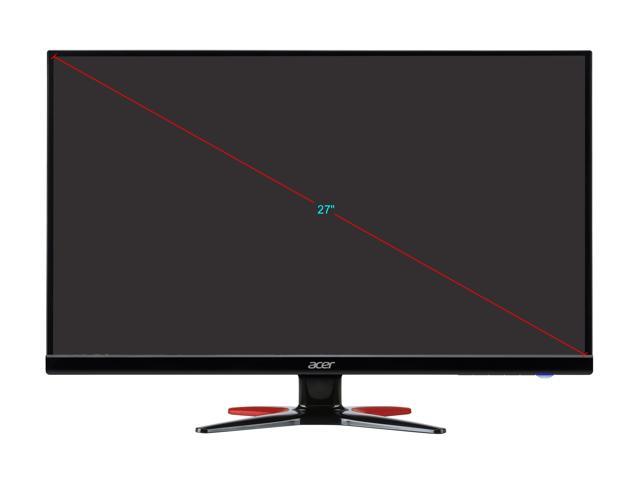 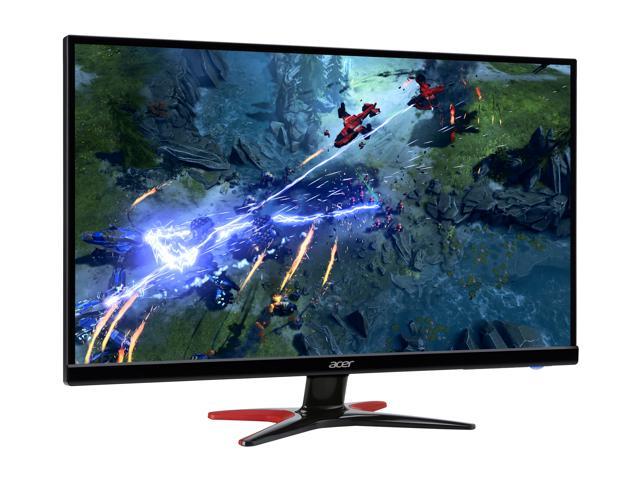 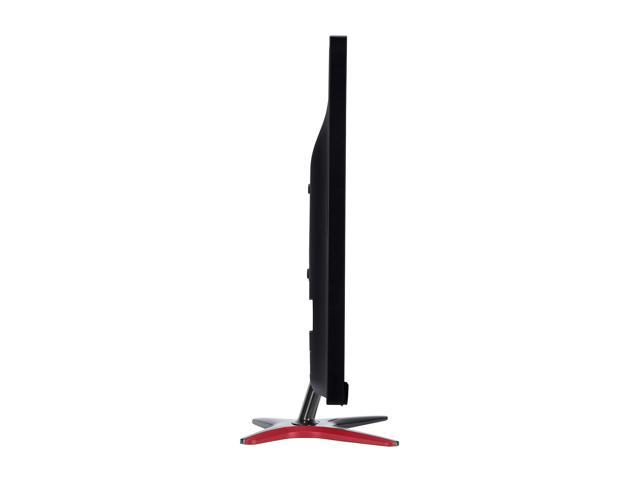 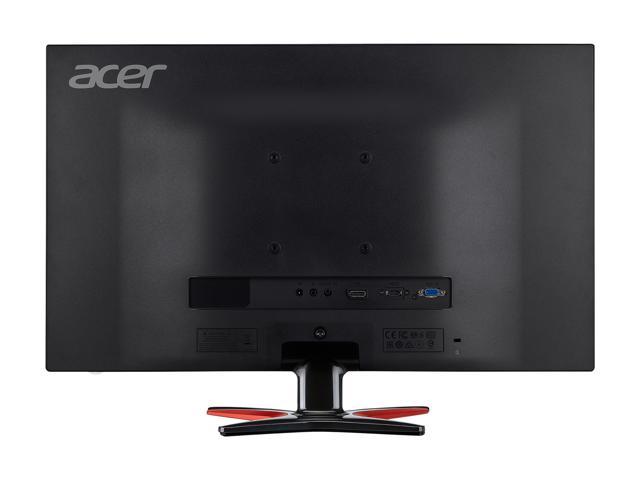 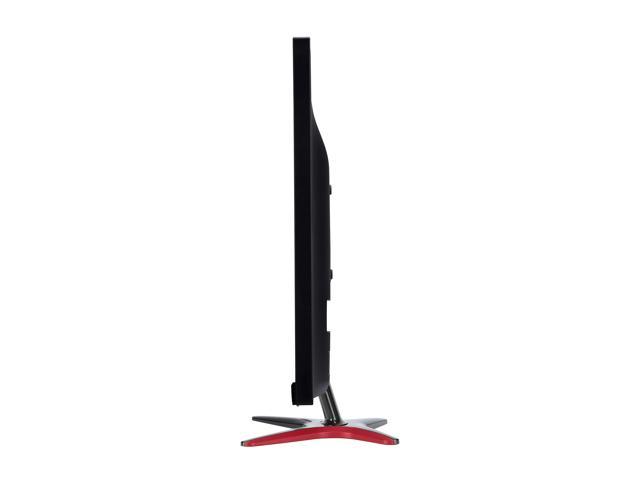 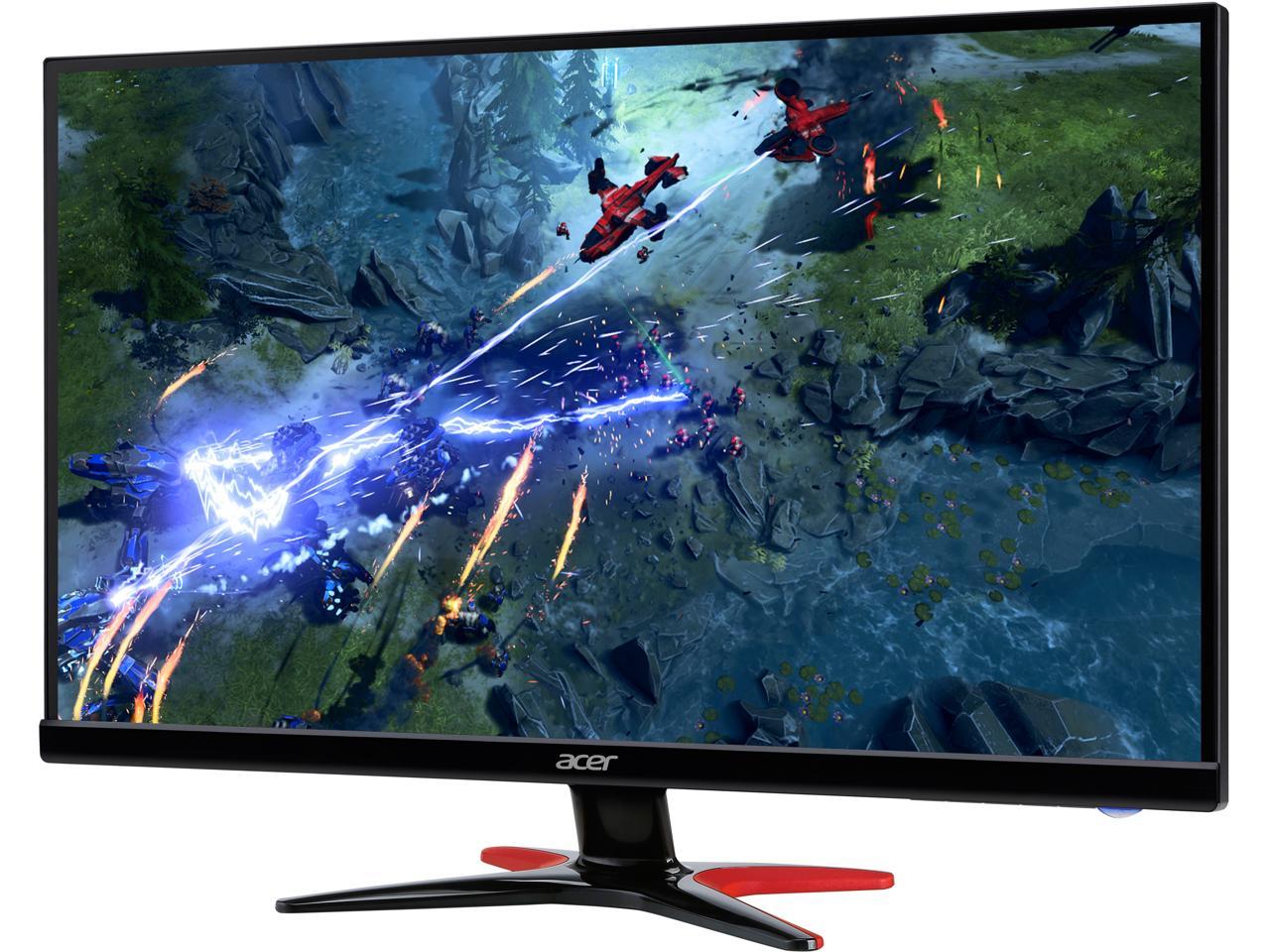 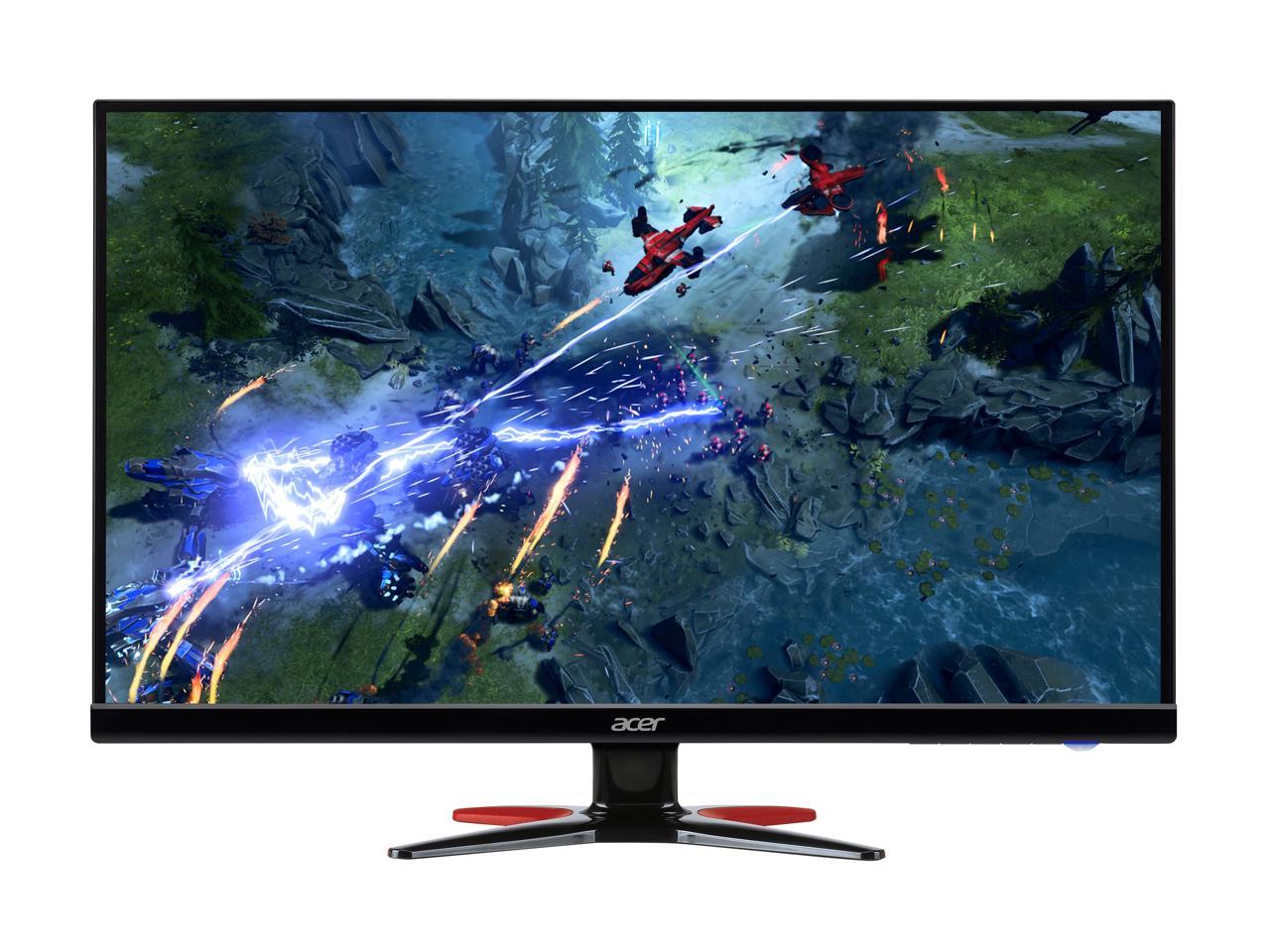 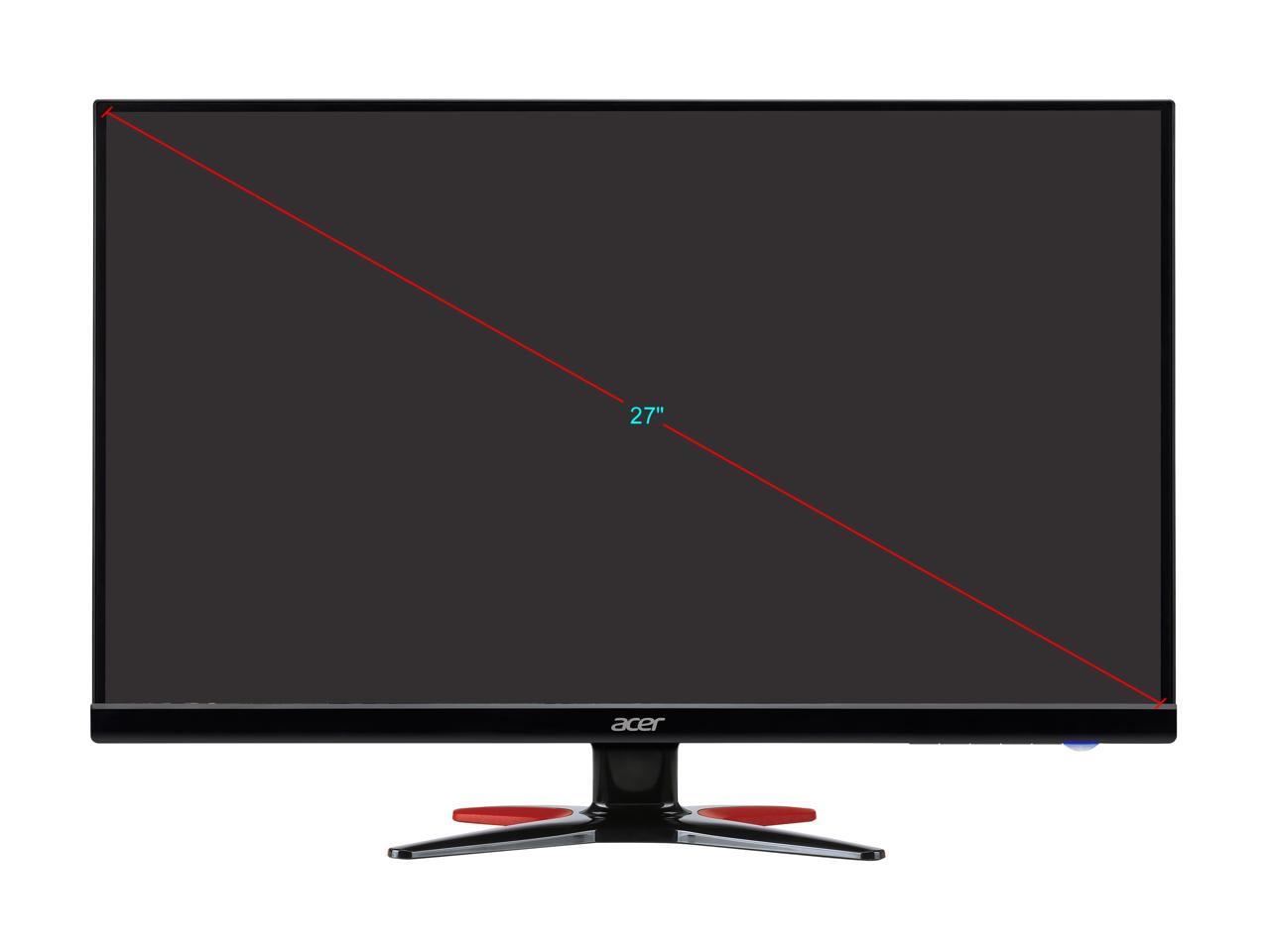 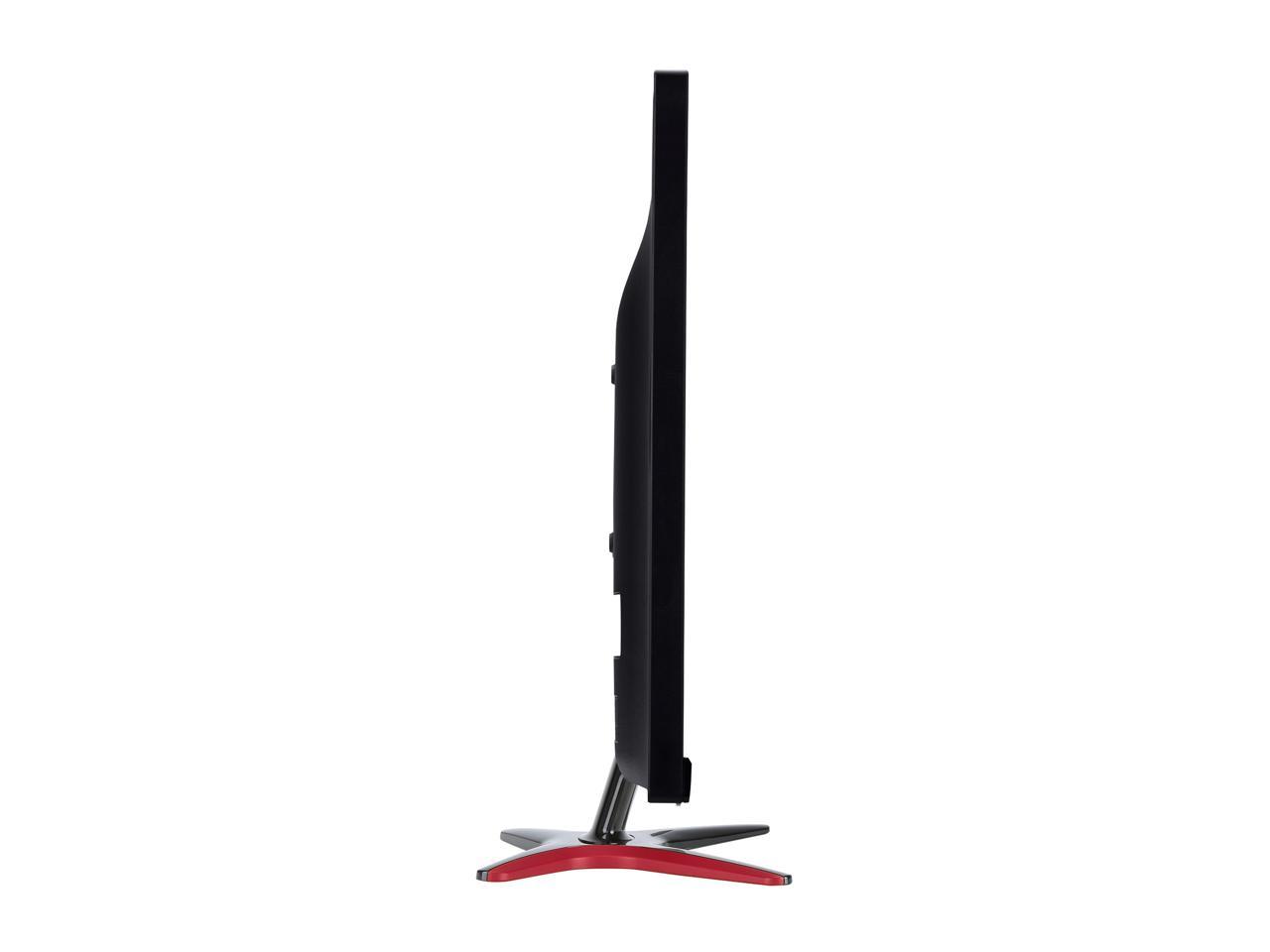 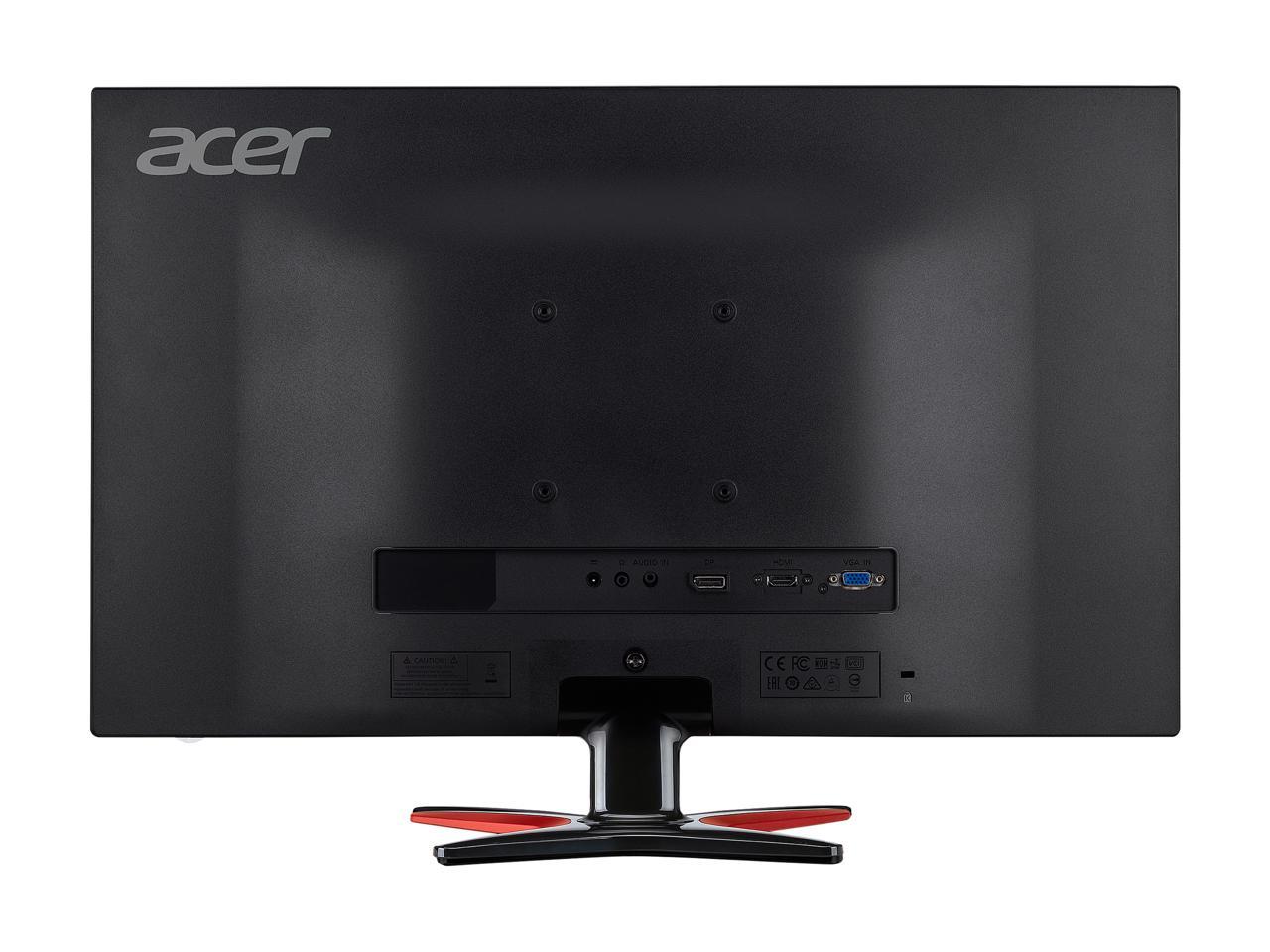 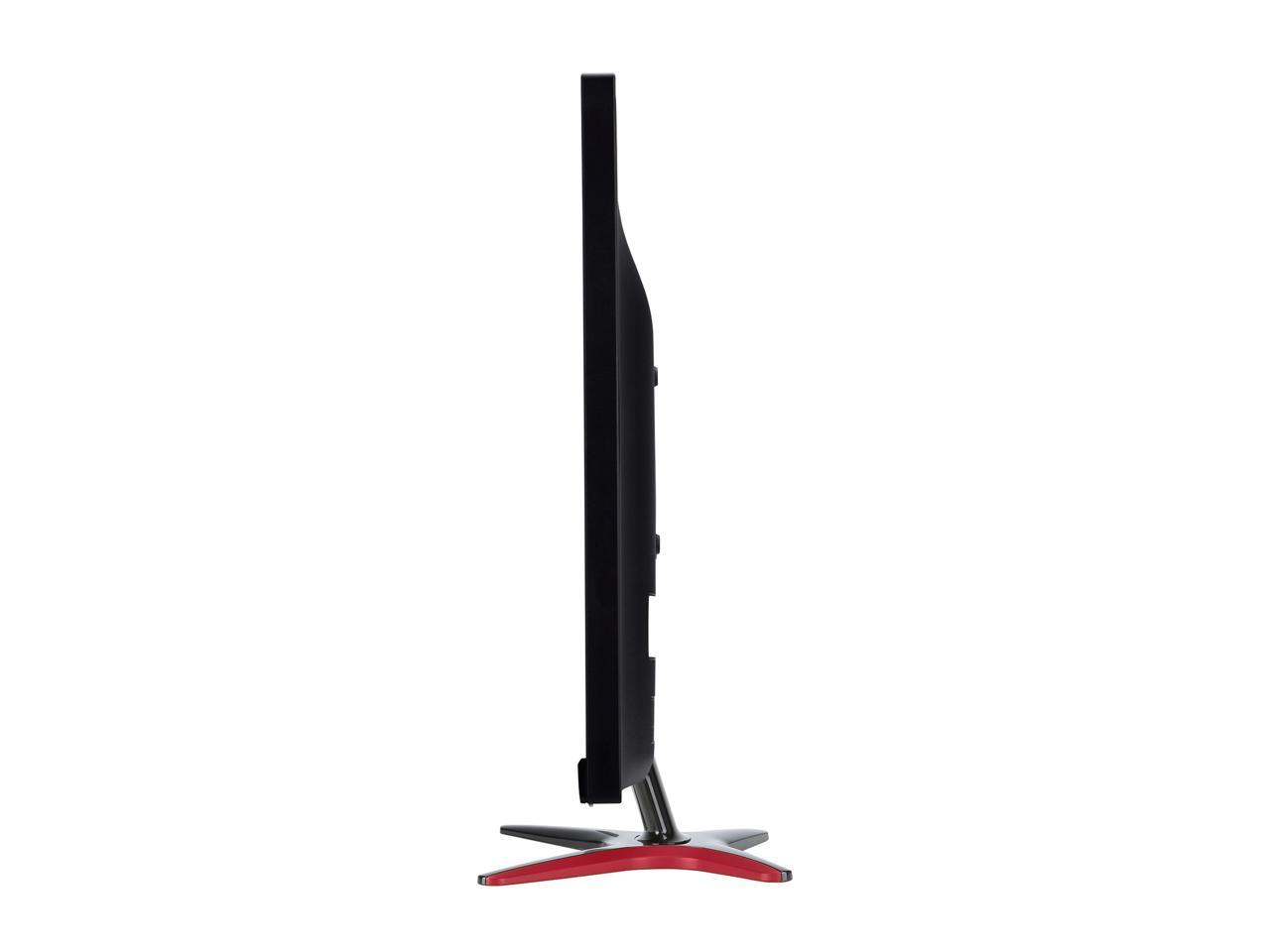 (121) Write a Review
OUT OF STOCK.
Fees for brokerage and duty included in price.
Overview
Specs
Reviews

A super slim profile and an X-shape stand combine to give off an elegant touch on any desk. Built-in speakers produce loud, dynamic sound, which save you space and clutter of external speakers. This gaming monitor also offers eye protection, eco-friendliness and energy saving - all while staying well within your budget. Ideally sized for what Pro Gamers use, the Acer GF6 comes with two models of either 24” or 27”. Screen tearing will be a thing of the past with AMD FreeSync which syncs your display’s framerate to the video card. Care for Your Vision Functional and stylish, the unique X-shaped stand is sure to catch the attention of your friends and family. Regardless of what video card you have, the GF6 supports VGA, HDMI and DisplayPort inputs.

Cons: Didn’t include a hdmi cable

Cons: This should not be called a gaming monitor. I've tried every setting on the Radeon software, and still the picture doesn't look good. A lot of ghosting when playing online games. My last resort was to turn off the overdrive setting, but it doesn't let my have access to that option. I have it hooked up through my HDMI cable. I don't know if I can return this, because I haven't contacted Acer yet. Even with my CAD software, sometimes the pictures clear, then sometime blurry, like it's not stable.

Overall Review: This is an update from my previous review, which I only gave one egg. I removed my new video card and installed my old card, hooked it up using the VGA port, and guess what? I was able to disable the overdrive which stopped the ghosting. I have very minimal lag in my online games now, and the text is sharp and clear. I don't know why my fancy new card was causing so much of a problem, but my 6 year old Gigabyte card put me back in the game. I apologize to Acer for a bad review and changed my rating from 1 egg to 4. I would have gave it a 5, but I had to snap the panel in at a couple of spots in the back, but all in all it's still a good monitor.

Pros: It was well packaged and was in minced condition the screen had no scratches or cracks. It comes with everything in the description and the shipping was only took 3 days!

Overall Review: I have nothing bad to say about it all. Keep doing what your doing!

Pros: -Affordable Gaming Monitor when on sale -The upgrade to 1ms response is a noticeable improvement if paired with a good mouse -75 Mhz is also noticeable, but to a lesser extent and somewhat offset by the 27" size -The blacks are notably deeper than my last TN monitor -All around a solid budget monitor

Cons: -The color range and detail on this monitor is sufficient (I'm happy enough to keep it). But it is by no means superb. I upgraded from a 10 year old Samsung T240HD, and I have to say that after calibrating the Acer for a half day it still looks slightly washed out compared to the Samsung. Good enough for gaming and casual use, but not professional photo or video editing. The blacks are a highlight. The monitor has a black boost setting and even on default it makes noticeably deeper blacks than many TN monitors I have seen. -Display adjustments are a bit of a pain to use. 80% of the problem is software. Adjustments are very counter-intuitive. You have to go to a setting, then hit enter to activate it, then hit enter again to activate some random subsetting, then adjust it, and then hit back multiple times to get to the main setting menu again. I don't understand why you have to hit enter and back so much to activate or deactivate a setting.. if it is selected then you just be able to turn it up or down without having to activate it first. Also, sometimes when you change one setting it will reset other settings without warning. Fun! On the bright side you can save profiles once you finally get it where you want it, so it's a one time horror show.

Overall Review: I don't really have a lot of straight out cons for this monitor, because it is a good monitor at the price point. I did a fair bit of research on monitors before purchasing this one, and none this size at under $200 are going to come without some kind of compromise or drawback (with the price being the major plus). With that said, I did want to share my experiences with this one after a week of ownership (paired with a RX 480 Graphics Card). -I'm not sure why Acer kept the same GF276 model number, but the Admipx version is a slim (~2mm on 3 sides) bezel update that looks considerably better than the original GF276. -If you sit close (within 2 feet) of the monitor, then you will see pixels in characters and web browsing. It's not a fault of the monitor, but a 27" screen really pushes the limit of 1920x1080 viewing up close. -On a similar note, I still see some screen stutter when scrolling fast at 75hz, I'm guessing that this is also a feature of a 27" monitor. For a truly smooth experience on a monitor of this size (at a close viewing range), 1440p and 144mhz are probably better choices. But it is definitely an upgrade on 60hz and noticeable in games. Again, price vs. performance. -The monitor has speakers (haven't tested them yet), but they require a separate 3.5mm audio cable (at least if you have a discrete graphics card). -The viewing angle is about 45 degrees to either side from up close. More than that and the image quickly degrades. -I read some reviews of people complaining about ghosting. For those with the problem the universal solution appears to be to turn off the OverDrive Setting on the monitor. -One thing that I did not read is that if you have freesync turned on then you actually can't turn off OverDrive. With that said, I have freesync and OverDrive on and don't have any ghosting, so maybe it is only an issue if one is on but not the other. -I definitely spent longer calibrating this monitor than any other LCD monitor I have owned. The RGB just did not want to align on the gamma (if one was on the others were off). The brightness was also crazy high and made everything look washed out initially. I ended up setting brightness all the way down to 8, with contrast up to 70. The display does look good, just be prepared for a lot of initial tuning to get it to a happy place.

Pros: Great visual quality for gaming Can customize all to your liking. Cheap monitor with high quality manufacturing

Cons: Speakers are not great, but I have speakers that do the job just fine.

Overall Review: Would recommend this to anyone and everyone who doesn’t mind having external speakers. 10/10 would buy for a dual and or Tripple monitor setup.

Overall Review: This is a great screen an definitely increased the FPS in all games. It did come with a stuck pixel right out of the box that momentarily fixed itself, but is back and won't go away. I will see how the replacement fares and hopefully it won't happen again. Update 2/4/2020 - Second screen came with a defective pixel. Asked for a full refund and will be buying another brand.

2 out of 2 people found this review helpful. Did you?
Manufacturer Response:
We are sorry to hear this; we understand you returned the Acer monitor but we would have been happy to provide support for you. If in the future you need assistance with an Acer product, feel free to contact support from the info posted at http://www.acer.com/ac/en/US/content/service-contact We appreciate you taking the time to write this review. Best regards, Acer America
William M.
Ownership: 1 day to 1 week
Verified Owner
Good monitor after settings are adjusted12/4/2019 8:12:02 PM

Overall Review: Had an issue with blown out whites and fuzzy text until I turned off an on-board setting called "super sharpness." Not sure if this came toggled on by default, but I highly recommend turning it off. Once I did that, my issue was instantly resolved. No issues to report after about 3 days with this monitor.

Pros: This monitor is stylish and the beautiful. With a little fine tuning the picture on this Acer monitor is better then I could have imagined! The 1ms response time is a game changer for sure. There are a lot of reviews on this monitor talking about how bad the built in speakers are, but I really can't say anything about them because I haven't even used them to be able to give an honest opinion. I can say that I didn't purchase this monitor for the speakers. I bought it for all of the other specs. All in all I've had this monitor for about 3 months and I couldn't be more pleased with it's performance. Well worth the money for this bad boy!