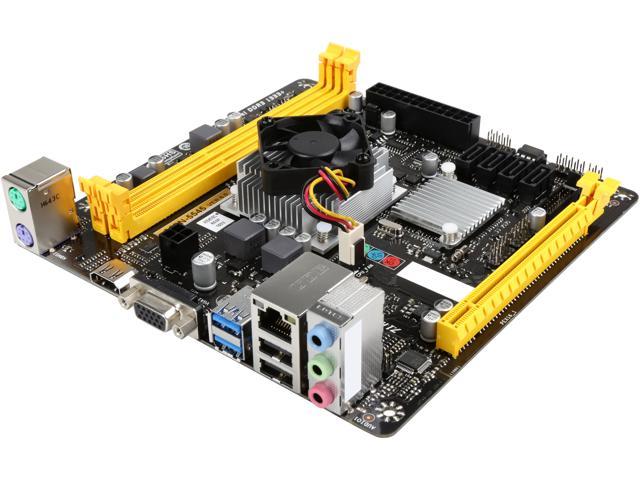 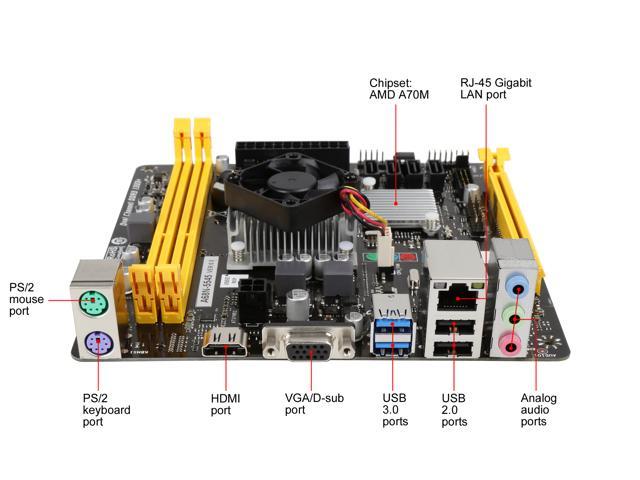 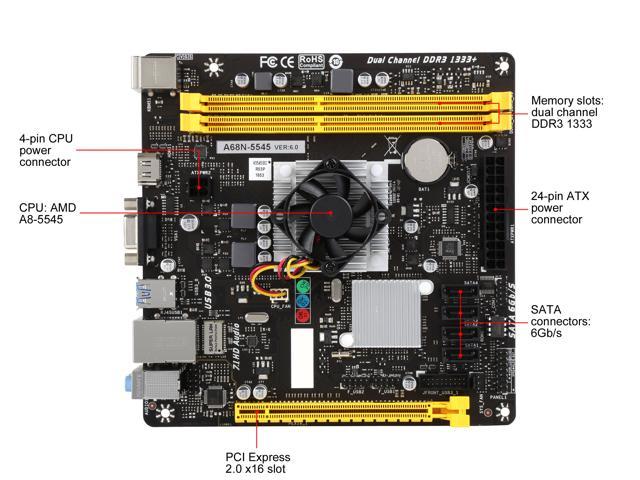 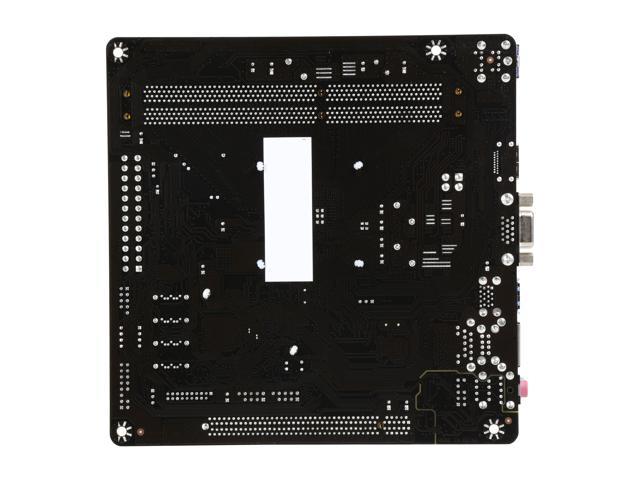 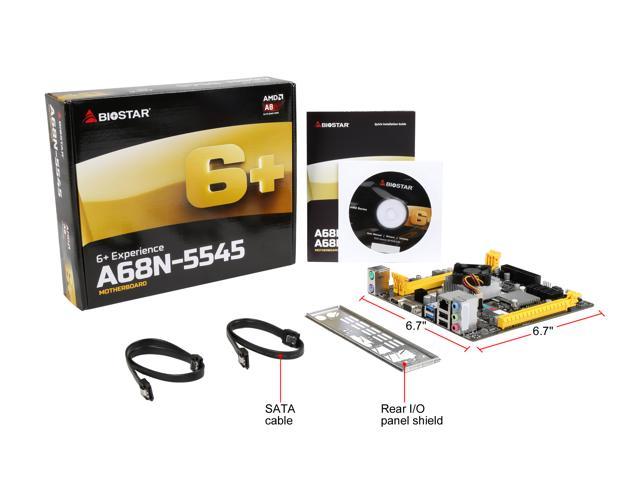 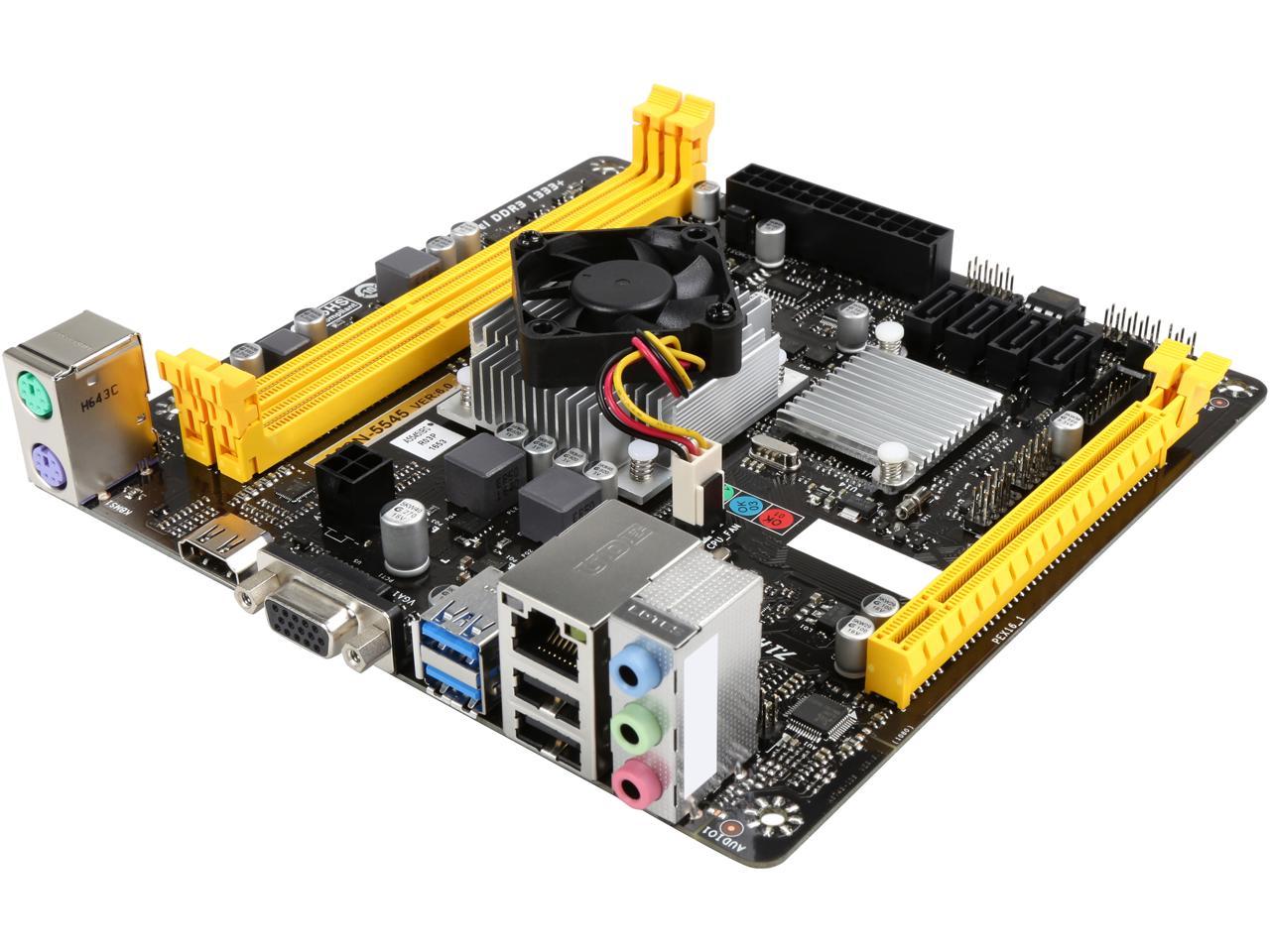 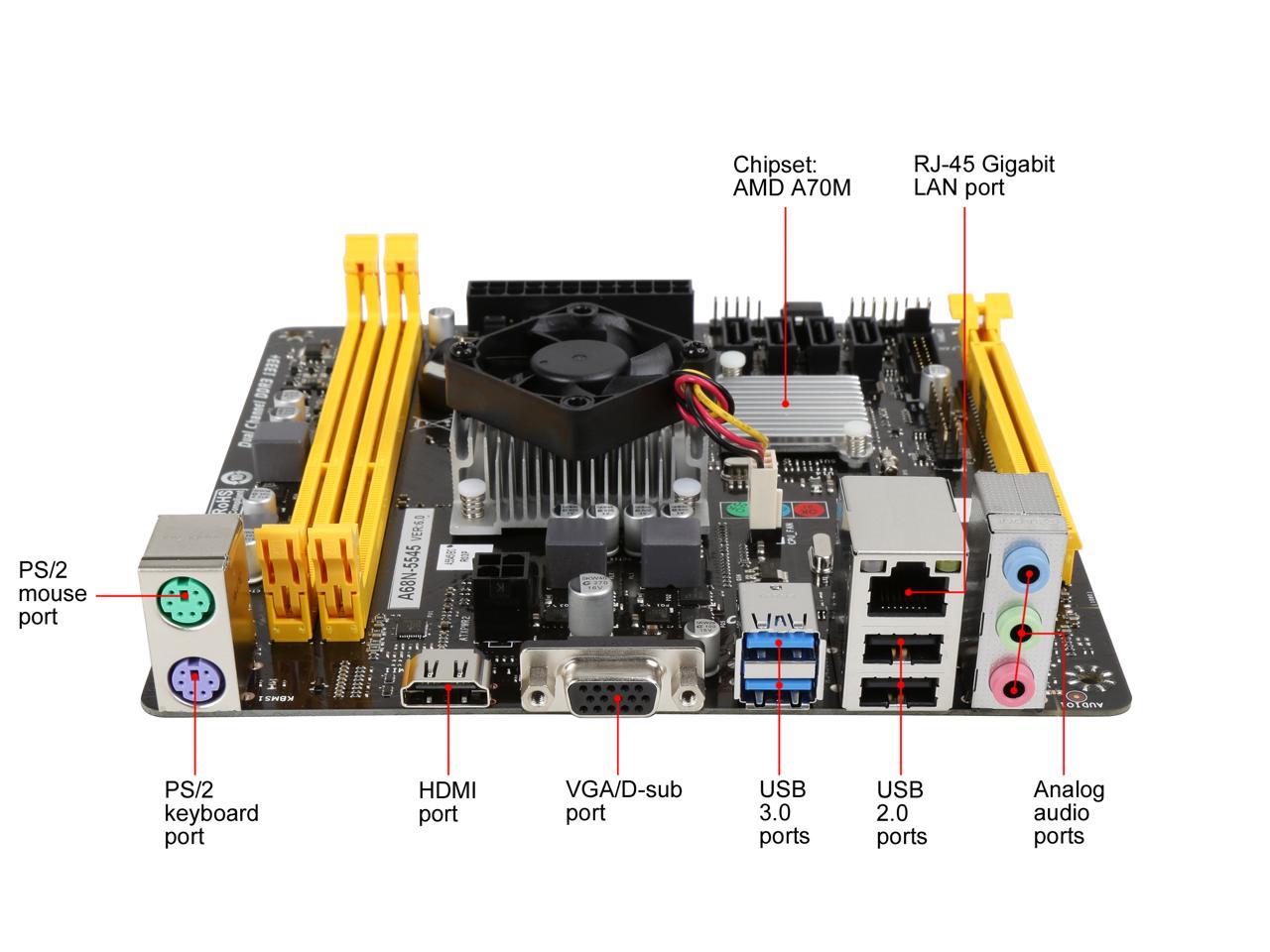 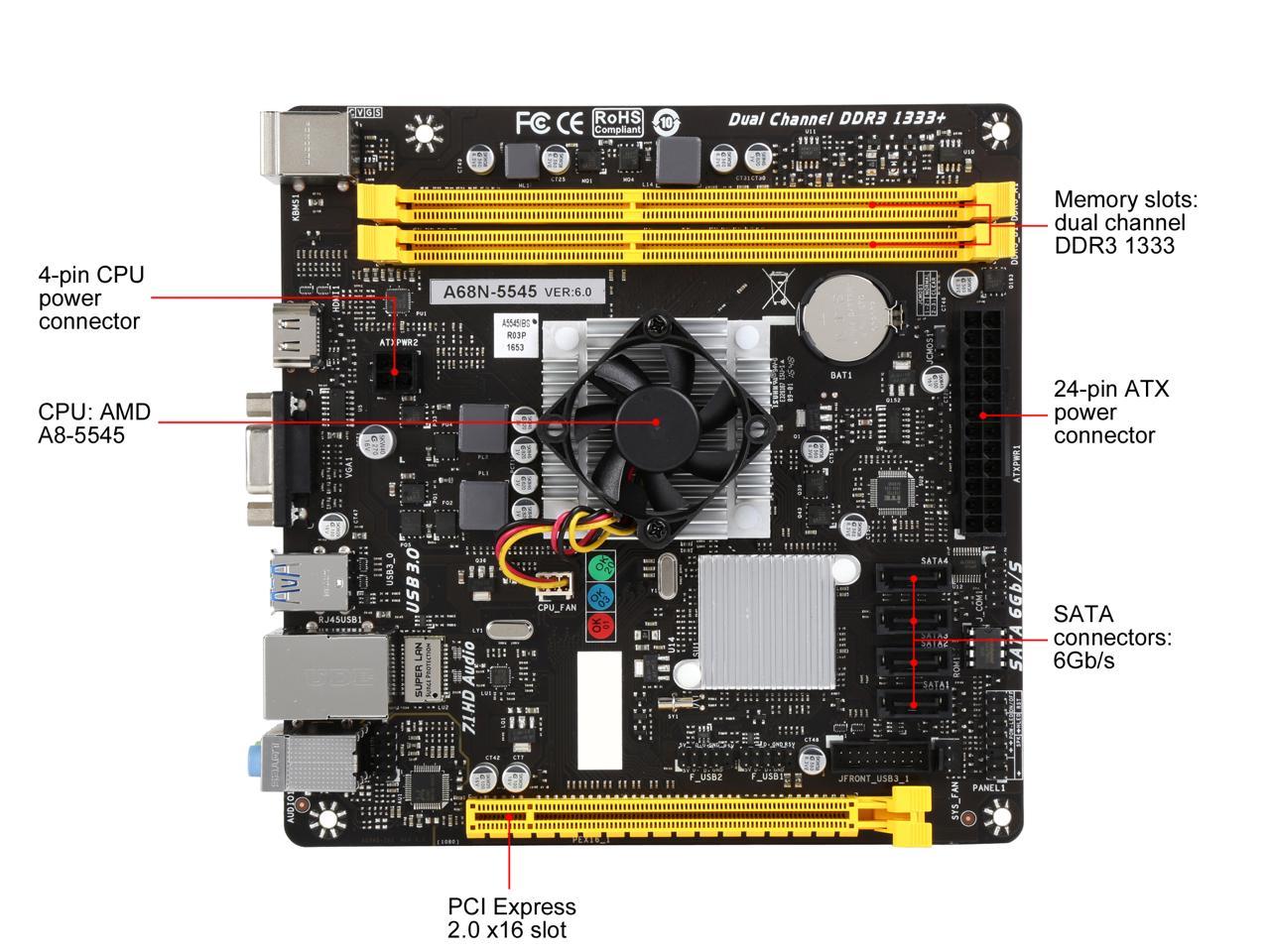 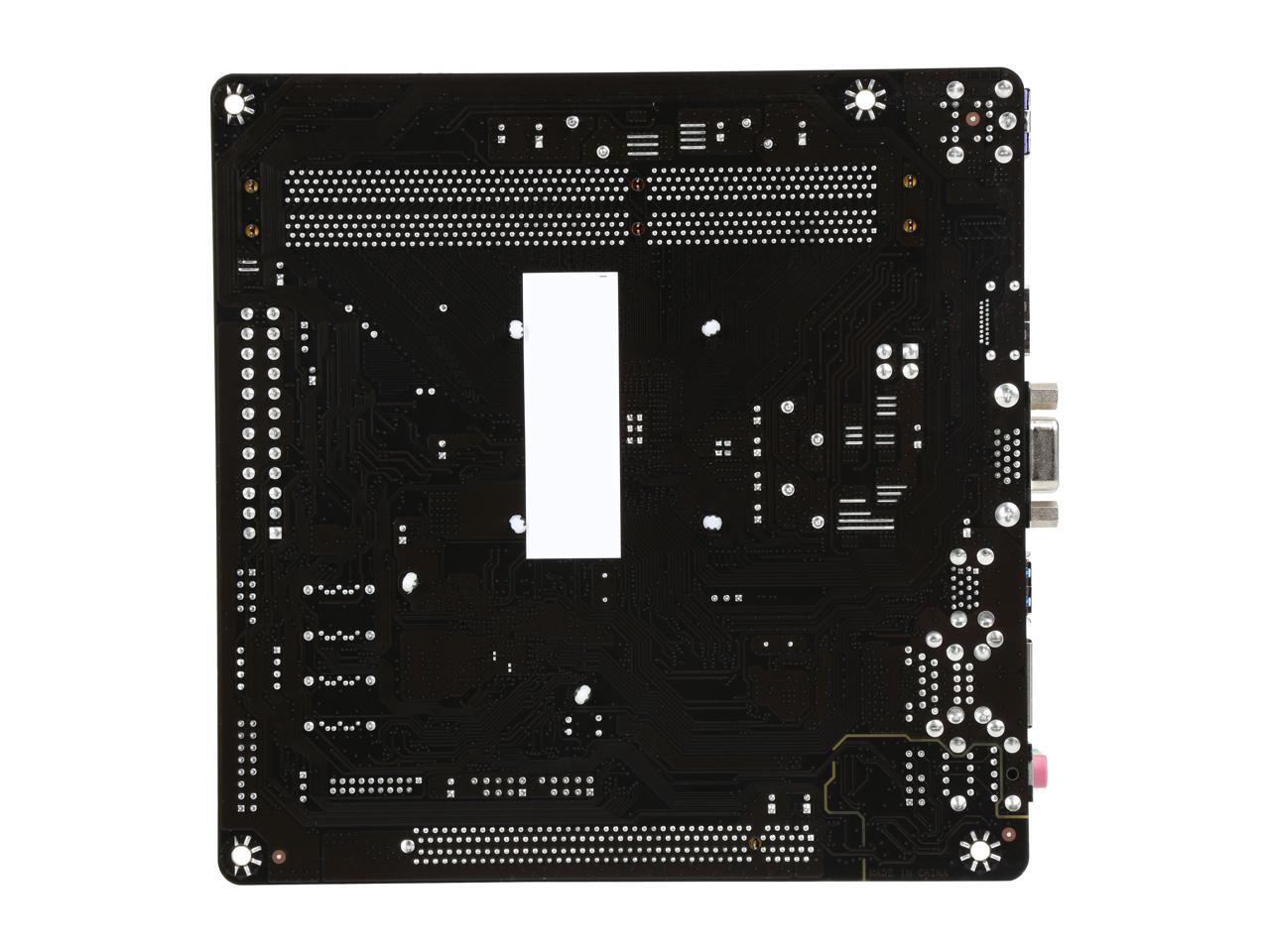 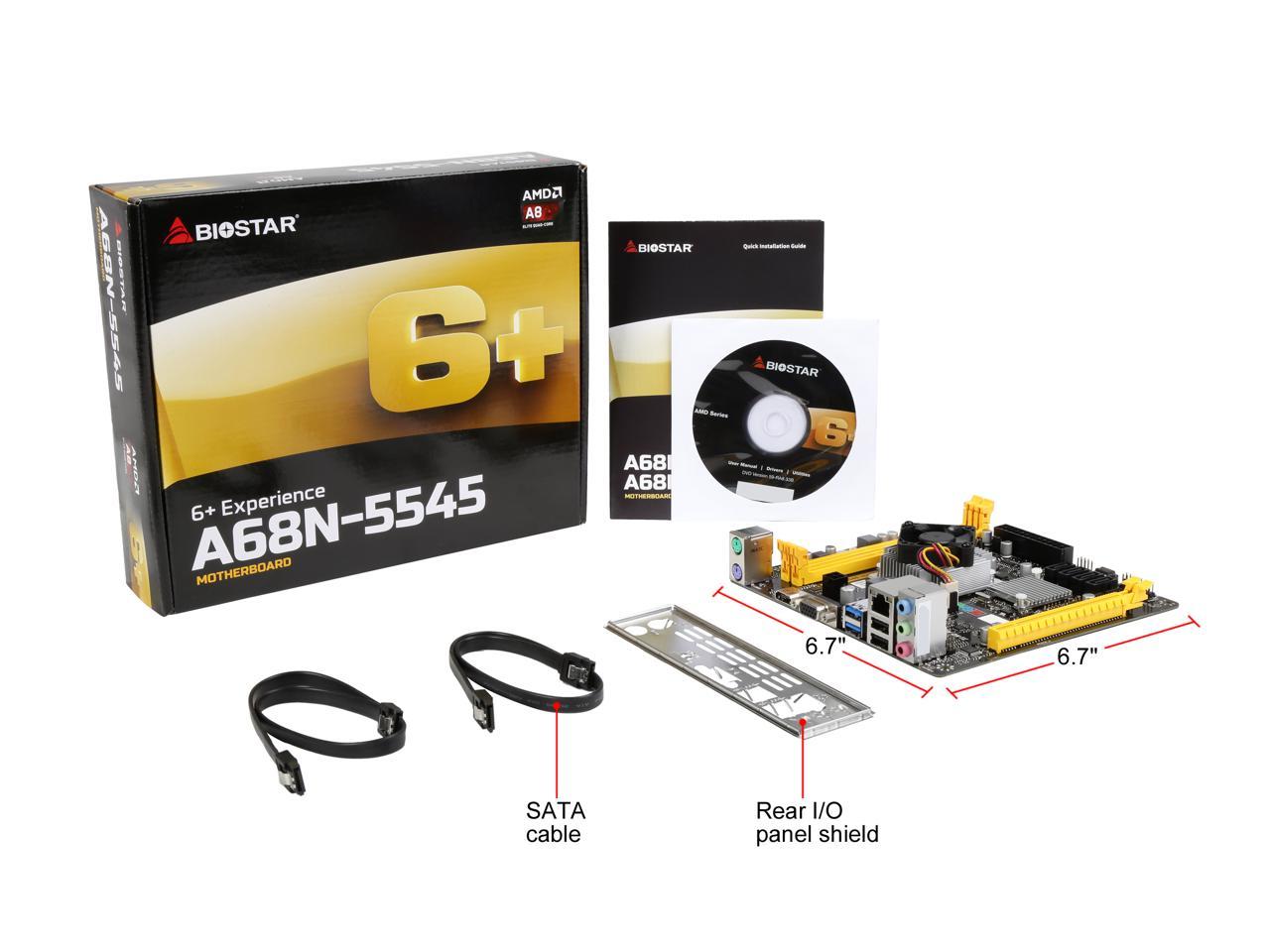 (31) Write a Review
OUT OF STOCK.
Fees for brokerage and duty included in price.
Specs
Reviews

Pros: - Offers better overall (i.e. multi-threaded) CPU performance than competing Apollo Lake J3355, J3455 and J4205-based Mini-ITX solutions at roughly the same cost. Benchmarks for the Piledriver-derived A8-5545 show improved single-threaded performance over the Jaguar-derived A6-5200 on this manufacturer's earlier board, nearly as good as of the aforementioned Apollo Lake CPUs. - Built-in Radeon HD 8510G with 384 stream units. - Supports dual-channel memory, unlike some competing solutions. - 16X (in size though electrically 8x) PCIe slot for those who'd like a proper standalone GPU. Many competing boards have only a small 1x connector. - Included CPU fan isn't as loud as I feared when not at full tilt, which it rarely is with the integrated GPU disabled. - Board layout permitted much better cable routing in my Antec ISK case than the ASRock H67M-ITX it replaced. - Gigabit ethernet, thorough (though thoroughly unnecessary) tweaking options in the BIOS, etc.

Cons: - What we have here is a Piledriver/Terascale 3 notebook APU from 2013 soldered onto a desktop motherboard. It's HD 8510G graphics are considered Legacy and will not be receiving updates (that said, a WHQL certified driver from 2015 that works perfectly fine is installed automatically by Win 10). The CPU, though capable, has nowhere near the IPC of modern offerings from either AMD or Intel. - With only a 19W TDP there isn't enough thermal headroom for simultaneous, aggressive CPU and iGPU clocks. Enjoy ping-ponging back and forth between being CPU- and GPU-bound. A dedicated GPU is strongly recommended for gaming use. - The BIOS allows you to manage the behavior of the CPU fun, but not the case fan. Sadly, manual control there is necessary for silent operation. - 7.1 HD Audio proclaimeth the marketing material but you'll only be getting that over HDMI as there are only three mini-jacks out back and no SPDIF header like on earlier boards.

Overall Review: As I wrote in the title, this is an eclectic little board and I advise you to consider your needs carefully prior to purchase. If you're looking to get the optimal gaming performance per dollar, you're much better off buying a used Core 2 Quad Dell and stuffing a GeForce 1050 or similar in it. My goal was to get an broken, 2012-era system up and running again at minimal cost and this board allowed me to achieve that and a bit more. Out came my truculent ASRock H67M-ITX w/Pentium G630T, in went this board with my original DDR3-1066 sticks and Radeon HD 7570 and in a few minutes I was back in my walking simulator, weeping over tales of teenage self-discovery. Given what I'd heard of AMD CPU performance circa 2013 I was worried I'd be CPU bound even with my lowly Radeon HD 7570. Thankfully that was not the case. I'm now able to run Life is Strange at 1080p / High Preset at 30-40fps with 100% GPU usage and ~75% CPU on the first couple cores, ~10-40% on the other two. Temps are in the mid 50s (Celsius) - dress appropriately.

Cons: Heatsink / fan combo could be a bit beefier.

Overall Review: Using this as a MythTV frontend/backend combo. 8GB of RAM, 240GB SSD for the OS (way larger than needed), 2TB WD Green for recordings, and a DVD burner. Using a fanless Geforce 610 card rather than the integrated GPU, mostly because I already had it and it is fantastic with VDPAU. Handles 4 simultaneous recordings + local playback + remote playback on 2 other frontends without breaking a sweat.

Cons: - no PWM for the fan(s) - this is an easy workaround (external controller, etc) so not really a make/break "con" IMHO

Overall Review: I bought one for a theater room and it's done everything I have asked of it. I bought a second for a spare bedroom. Am using Logitech K400 wireless keyboards as "remotes."

Pros: The biggest pro is low cost. Add in the simplicity of setup, the abundance of useful peripheral ports for the back panel, plenty of ports for storage drives, and headers to add even more ports to the front panel, and the low current draw. Throw in the ability to take more memory than I'm likely to want to install on it (32GB!), adequate embedded graphics processing for basic uses, a VGA port to use it with any older monitor you might have lying around as well as an HDMI port for connecting to newer monitors, support for every recent version of Windows (and at least some Linux builds, as well, as I have discovered), extremely quiet operation, the ability to use older PS/2 keyboards and mice if you have those among your spares ... it's an easy motherboard to love.

Cons: The PCIE slot has an x16 connector, but it only supports an x8 connection. This isn't really a problem if you're not planning to use it for an application that needs the addition of an x16 connected card, and as that isn't a likely scenario for a system using this motherboard it's only worth mentioning to make sure it is clear to prospective buyers.

Overall Review: I would recommend this to a person who wanted to build a low cost, basic system for typical lightweight home use. It'll certainly work as a system for browsing the internet, or as a home theater system, or as a system for doing basic word processing or other "office" applications. It'll handle lightweight "casual" games, but I sure wouldn't use it as the basis for a serious gaming PC. I've presently installed Linux Mint on mine. Using a modest-sized 120GB SSD for storage makes this thing boot fairly quickly and it is snappy and responsive with basic tasks. I'm using an old PS/2 connector Dell keyboard and mouse combo that I had in my spares, which saves me from having to buy USB connecting models, though this thing certainly has plenty of USB ports for folks who have newer keyboards they want to use. I installed it into an old Gateway case I had lying around that has front-panel USB 2.0 ports and a card reader that also connects to one of the USB 2.0 headers, and added a pair of front panel USB 3.0 ports that fit into an old 3.5" floppy-sized opening on the case. One of the real strengths of this motherboard when coupled with an SSD is that it barely uses any power at all. If you need a system that is energy efficient, small and easy to set up, and if your needs are such that a basic system will suffice, then this is a motherboard to consider. I'm giving it a 5 egg rating with the understanding that it gets that in the context of use in a system that won't be used for tasks that require more powerful CPUs or graphics cards.

Pros: - Does everything the other reviewers mentioned. - Works out of the box. No nonsense config and no compatibility issues. - Useful (if not the only current option) platform for a small/cheap Linux box (PFSense, NAS, HTPC, etc.). - Reasonable value when on sale (got mine for $59 CAD Black Friday). - Is at least somewhat available, whereas AM1 Kabini basically...is not. - Out competes other options

Cons: - Dated technology. Not as powerful as AM1 Kabini, despite having the dual-channel memory (whereas AM1 has single channel). - Its a laptop-grade chip that scores drastically lower in all compute tasks. A basic Arch/Lubuntu N-Queens benchmark problem will run in 18 seconds on this board whereas my AM1 will scorch it in 4-5 seconds (and my Ryzen will pull 0.41 sec). A basic spreadsheet will noticeably lag when highlighting/deselecting cells. This 2013 notebook chip is simply just a lot less responsive in desktop tasks then Kabini (2015). - Despite both APUs scoring similarly in those synthetic cpubenchmark points, Kabini (2500 pts, 25W) will leave this A8 thing in the dust (2400 pts, 19W), and you can somewhat overclock Kabini (and use ECC ram in some cases). - Will not overclock to anything stable worth talking about, despite a hidden multiplier option in the BIOS to do so. It just runs too hot baseline, you can't control the voltage, and the silicon is low-binned laptop grade stuff from 2013. - On this APU, a 2GB GPU RAM allocation is borderline for HTPC, even with lightweight Linux and some tunings, a browser running twitch.tv will pin all 4 cores at 90% utilization. Don't expect to multitask. - Runs quite hot (even at idle), but is silent.

Overall Review: I was originally considering a mini ITX cluster of these things for some Docker/Hadoop and other distributed experiments. If you have old/disposable parts available, it might be worth it to build an ugly but simple/cheap system around this thing. For my application(s), I figured the dual-channel memory would scale-out better than a single-channel Kabini cluster. Of course you can't really get AM1 Kabinis now, so that leaves this board as really the only good, cheap x86 option to derp around with. With the current (Jan 2018) RAM and SSD prices, this thing doesn't scale nearly as well. You would be overpaying for last-gen components (no real carry-forward upgrade paths for DDR3 and SATA) and sticking them on an anemic cpu/mobo combo.

Manufacturer Response:
Dear Customer: Thank you for your feedback. We apologize to you for difficulty with your BIOSTAR product. Please contact us at support@biostar-usa.com as soon as possible; we are always here to help you to solve the issue
Brice G.
Ownership: 1 week to 1 month
Verified Owner
Perfect for Low end User, HTPC, Low end Games, and Eggcellent LOW Power Consumption!!!12/16/2017 6:24:09 PM

Pros: No issues installing Windows via USB, or CD/DVD ROM BIOS is very user friendly and lots of adjustable features I didn't expect. +++ : ) (Memory and CPU) What got My attention was the LOW (TDP) Thermal Design Power 19W It fit the budget. Very Happy Happy Wife Happy Life

Cons: "Secure Erase Function" in RAID setup is very slow, not really sure if I even needed to do this. only 4 SATA ports. I guess if you need all four ports for HDD's to run RAID 10 you could use an external USB CD/DVD Drive.

Overall Review: I would definitely recommend this if your looking for an energy saver using the integrated graphics. If you need a little more ump go with a geforce 210 graphics card or something comparable in low power consumption. Ive got a 9800GTX+ with a Corsair CX430 PSU 5 SATA ports would have been perfect.

Overall Review: Wow, what a little gem! Perfect for a low cost DIY NAS running linux thanks to the 4 SATA ports. Fan was a bit noisy, but I replaced it with a very silent Noctua NF-A4x10, which dropped the CPU temp to 36 celcius on idle instead of 40. I would definetly buy again!