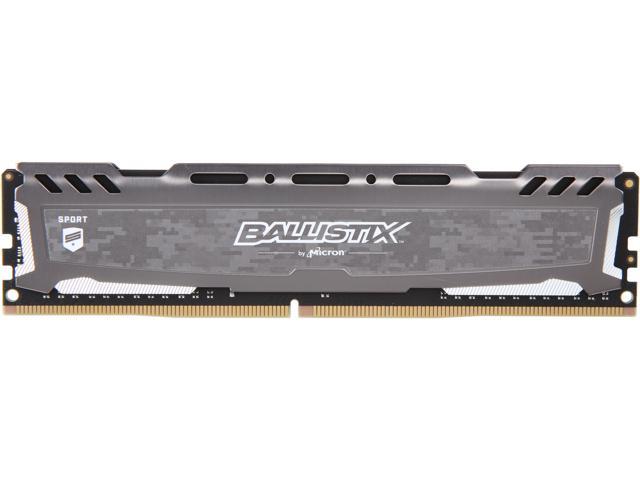 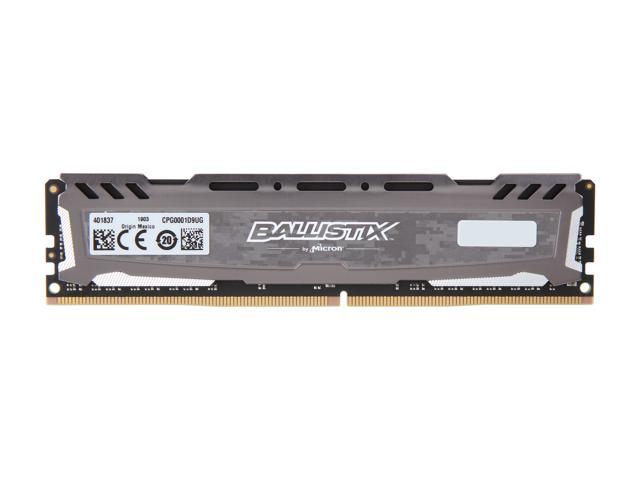 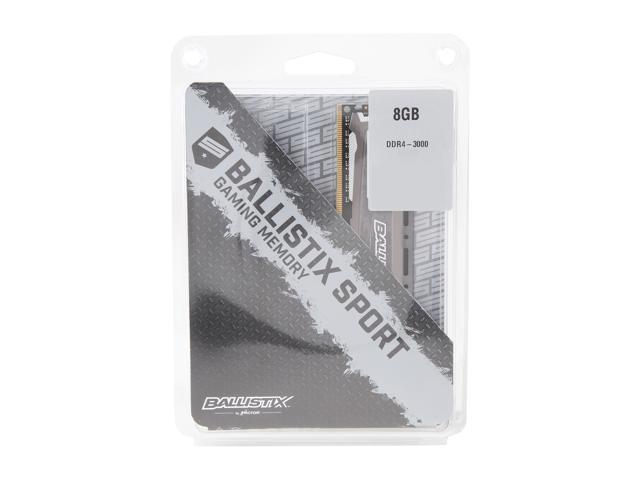 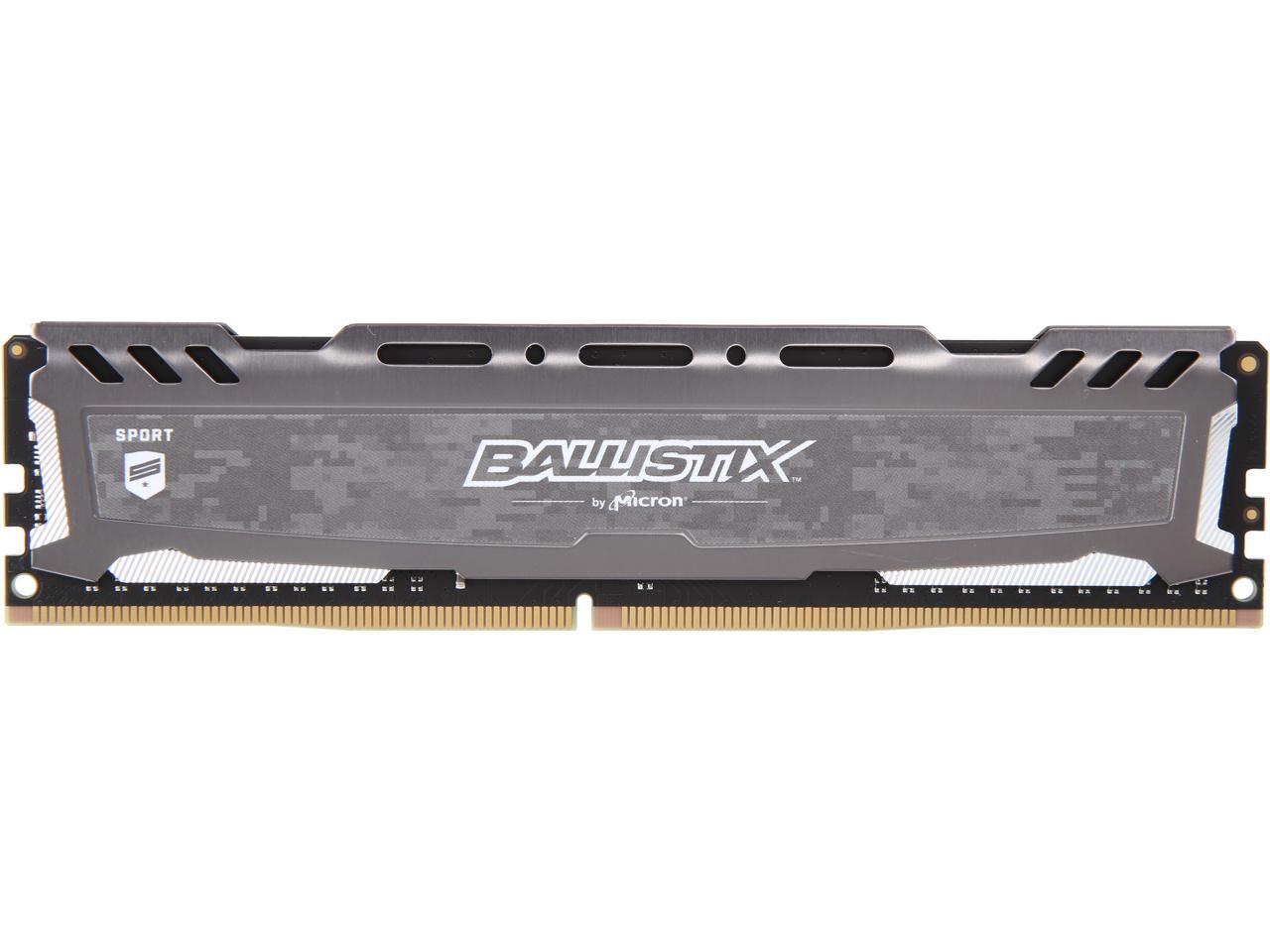 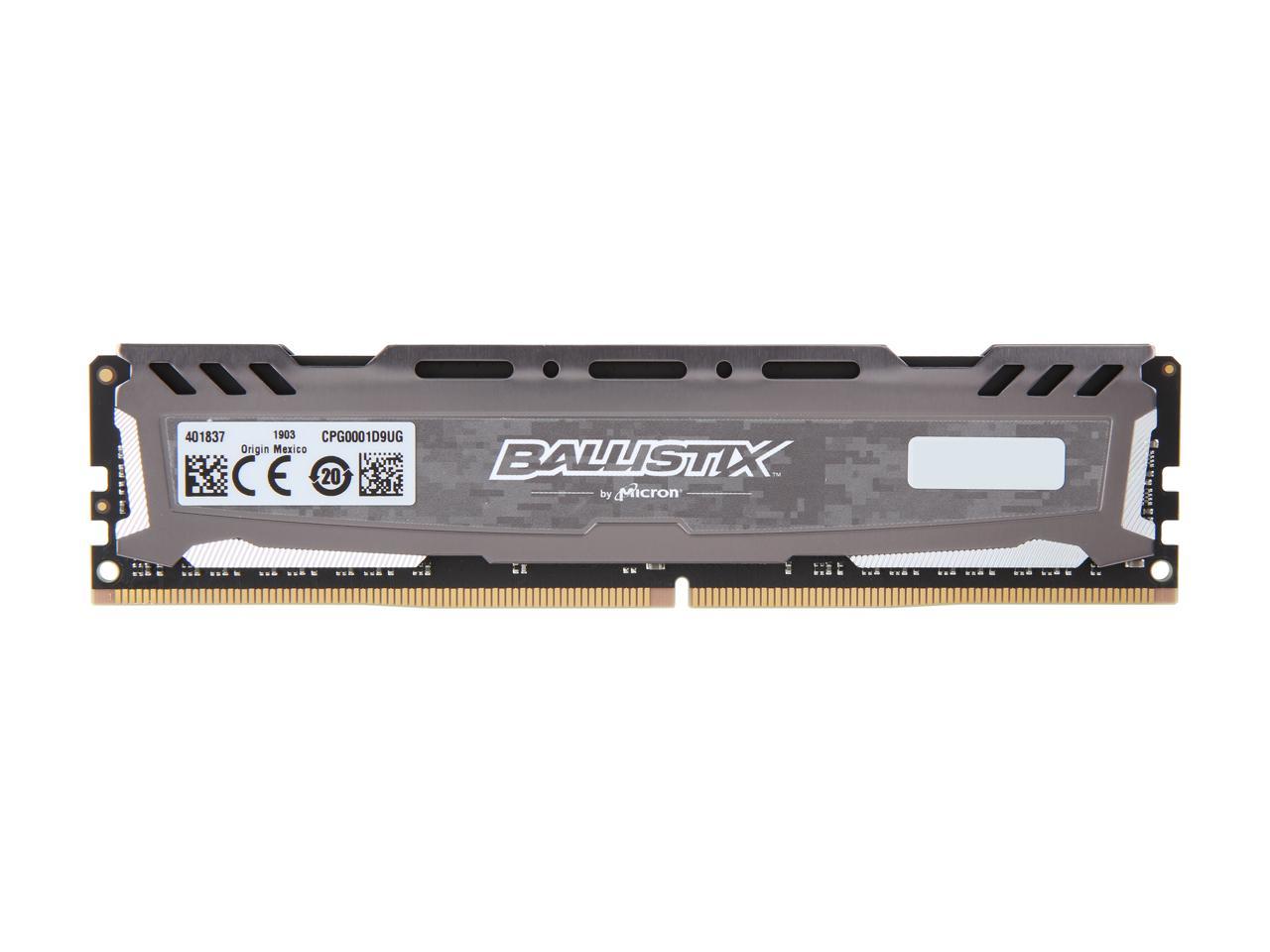 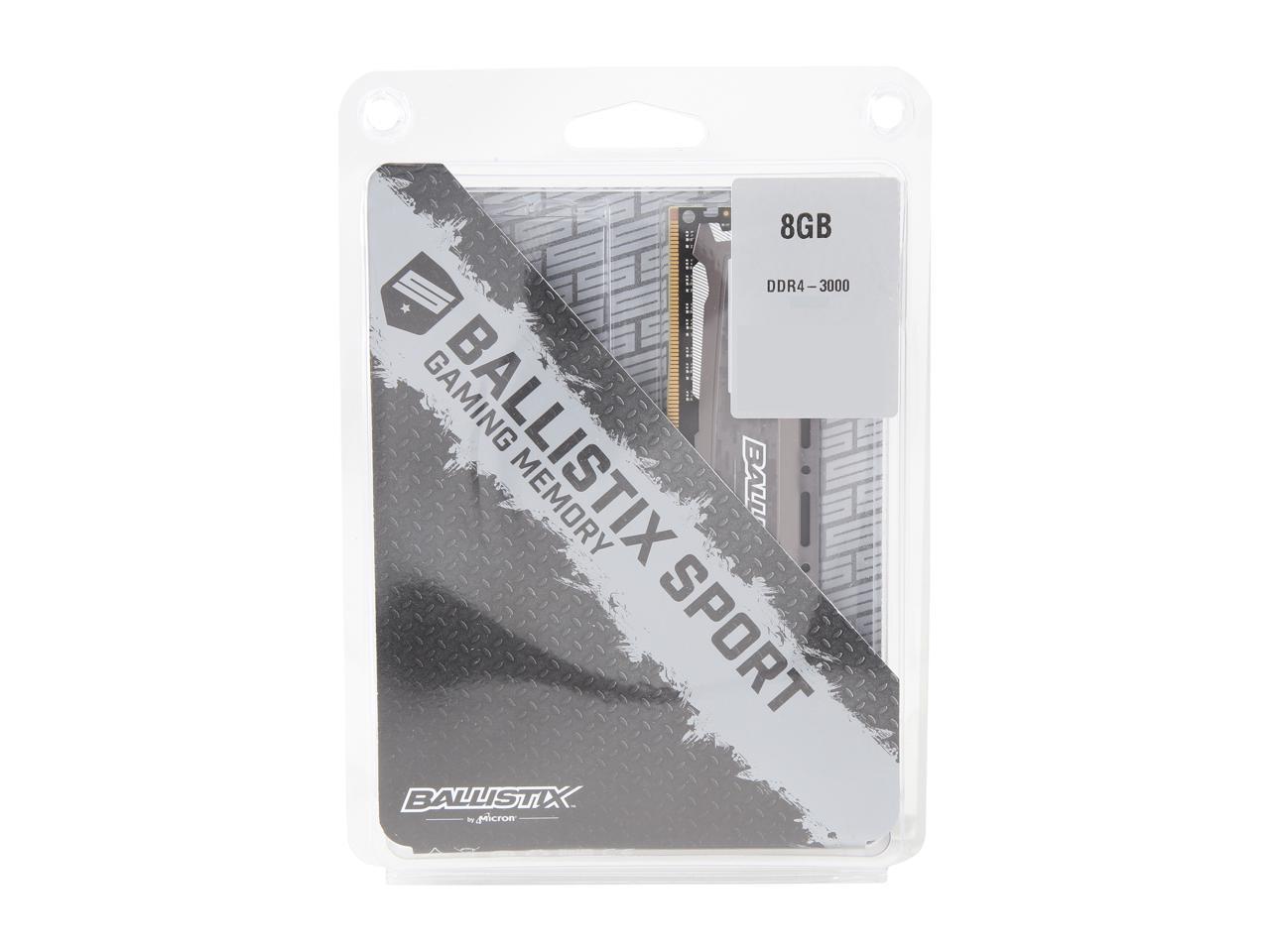 Learn more about the Ballistix BLS8G4D30AESBK

Pros: These lower profile modules have lowered my CPU temps a couple degrees compared to another vendor's towering heat sinks which led to a 40-50% obstruction of my intake fans. This ram is better value than the more popular and expensive brands listed on the X399 Taichi compatibility list. This isn't even on their list for some reason.

Overall Review: Amazing! Running two of these 32GB kits overclocked to 3600Mhz in my X399 Taichi board combined with ThreadRipper 1950X. I wasn't able to get a CORSAIR Vengeance RGB Pro 64GB kit to run optimal speeds in quad-channel configuration, so I sent it back.(yes, BIOS was updated, voltage bumped and timings tuned manually) Hence, I ordered 2x Crucial 32GB kits (BLS2K16G4D32AESB) of Ballistix Sport LT (DDR4 3200), 64GB total. My system initially had issues detecting only 48GB out of 64GB memory with both the Corsair and Crucial kits. I tediously tested each 16GB stick, one-by-one, in each slot (powering down in between swapping sticks) to make sure there were no issues with any of the slots or memory modules. And yes, I installed them in the proper slots according to the motherboard manual for quad-channel configuration. In both instances (the Corsair 64GB kit and the two Crucial 32GB kits), I had to power off my system and swap the two sticks in memory slots D2 and C2 with the sticks originally powered up in slots A2 and B2. After powering back on, the BIOS recognized all 64GB of ram. I suspect the BIOS memory options set to Auto related to memory calculations/testing, allows the system to learn, recognize the appropriate memory config. I was able to push the Crucial memory to 3600Mhz at 1.3v (for both DRAM Voltage and DRAM_CD Voltage), but it didn't hold stable until manually setting both Load-Line Callibration (LLC) options to Level 4, versus the default of Auto. I tested Level 3, but later fell back to L4 due to the unnecessary temps. Also note, I set DRAM Timing Config Command Rate (CR) to "2T", Gear Down mode to "Disabled", and Power Down Enable to "Disabled". I noticed the rest of the DRAM Timing Configuration I entered manually were overwriten after setting XMP 2.0 Profile 1. Note that the aforementioned settings including DRAM Frequency were made under the XMP settings (from the OC Tweaker tab), NOT under Advanced > AMD CBS > UMC Common Options > DRAM Timing config. In fact, the settings I made from OC Tweaker tab wound up being inherited by the timings under UMC Common Options. I also disabled "Bank Group Swap", "BankGroupSwapAlt", "DRAM ECC Enable" as I figured the fewer "Auto" settings the system needs to try and detect, the smaller the likelihood of problems resulting from the system attempting to Automatically set options properly. In my profession, hard-coding settings avoids issues with failures in negotiation and auto-detection because there's too many vendors and too many different standards which are often followed differently. Other X399 settings made include disabling Suspend to RAM, C-state controls, as well as ACPI_CST C1 Declaration. The only ACPI option I left enabled was HPET. While I haven't disabled P-State controls entirely, I set "Relaxed EDC Throttling" to "Enabled" to reduce or prevent processor throttling. I considered changing "Power Supply Idle Control", but I've read it can cause some systems to crash depending on kernal. Many of the miscellaneous changes to power settings I've made above were to prevent fluctions in power, thereby providing a stable system when overclocking. Changes in power to/from one subsystem can affect power to another. Last mention, CPU Spread Spectrum was also set to Disabled. All things considered, getting an X399 board (Taichi) combined with a ThreapRipper 1950X to run 3600Mhz memory clock takes the cake from an overpriced Intel setup.

Pros: This particular kit (32GB 3000 C15) can reach the following frequencies and timings: - 3200 C14 - 3600 C16 It can cover the Ryzen sweet spots as long as you set the proper timings and sub-timings. Low profile design makes it an excellent choice over the Corsair LPX, which are mostly Hynix modules.

Cons: Not really a con, but you have to know how to get proper settings via Thaiphoon Burner and Ryzen DRAM Calculator. Its rated XMP speed isn’t the best out of the box, but has a lot of potential when manually tuned.

Cons: - Looks a bit plain - Some trouble getting four sticks running at 2933MHz on an ASRock AB350M PRO4 motherboard (but that's a motherboard issue, so it's not really a con)

Overall Review: Buy it. It's cheap, it's fast and the Micron E-dies clocks higher than earlier Hynix and newer Samsung dies. It's no B-Die, but it costs a fraction of a B-Die kit now that Samsung has stopped producing them.

Pros: Set xmp profile and go. Overclocked to 3200 with one click. Tweaked timings to be tighter with Rzyzen memory master. Good micron e-die ram. Close to b-die speeds, half the price.

Overall Review: I'm using this with my ASRock X570 Extreme4 Motherboard, Ryzen 5 3600 build. Enabled XMP 3200 profile in the bios to achieve 1600mhz per stick, when run in dual channel, this equals 3200mhz as advertised. I've always been happy with Crucial memory. I ran Crucial Ballistix on my ASRock Z87 Extreme4 for many years without issue. I will continue to buy it so long as the price is right and the quality is there as I've come to expect of it.

Overall Review: not stable even you increase the DRAM voltage by 5%.

Manufacturer Response:
Thank you for purchasing Crucial memory and for your review. I am sorry to hear that you are experiencing this with your PC. You will want to ensure that both the motherboard as well as the CPU that you are using can handle the advertised speed of this kit of memory. A quick search online for the make / model of your CPU should provide you with the correct information. If both the CPU and motherboard are capable of running at the advertised speed, then we would recommend that you update the BIOS as well as any other outdated system drivers from your motherboard manufactures website. You can try running the Windows memory diagnostic tool just to ensure that neither new sticks of memory is failing. If you continue to experience issues after attempting these steps, we ask that you reach out to us directly so that we can assist you further. We provide free technical support with this product and also back it with a limited lifetime warranty.