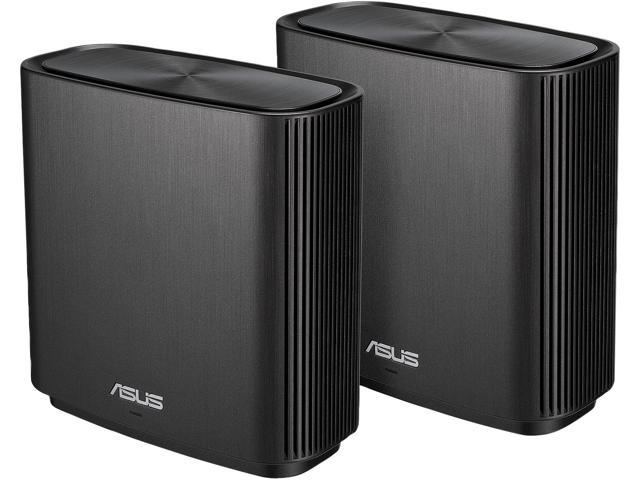 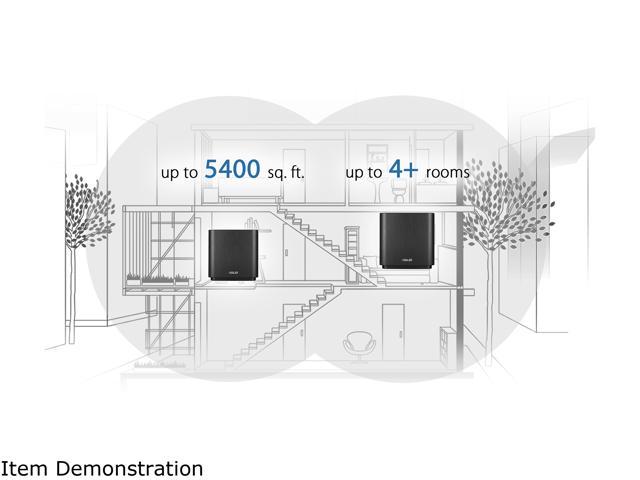 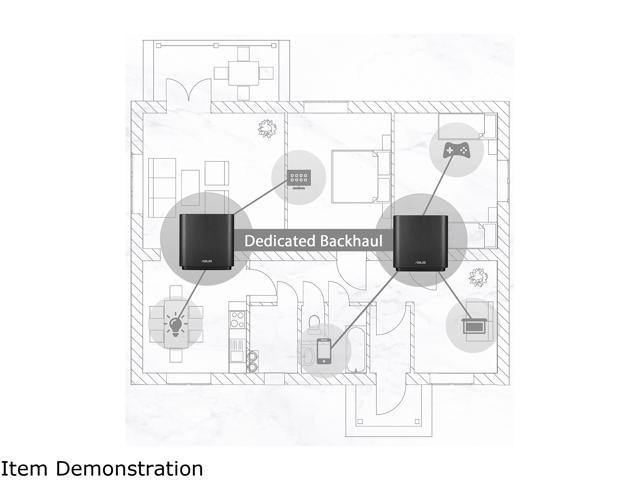 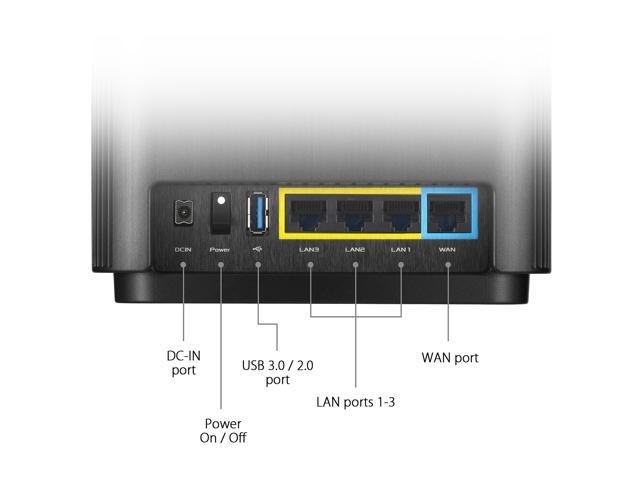 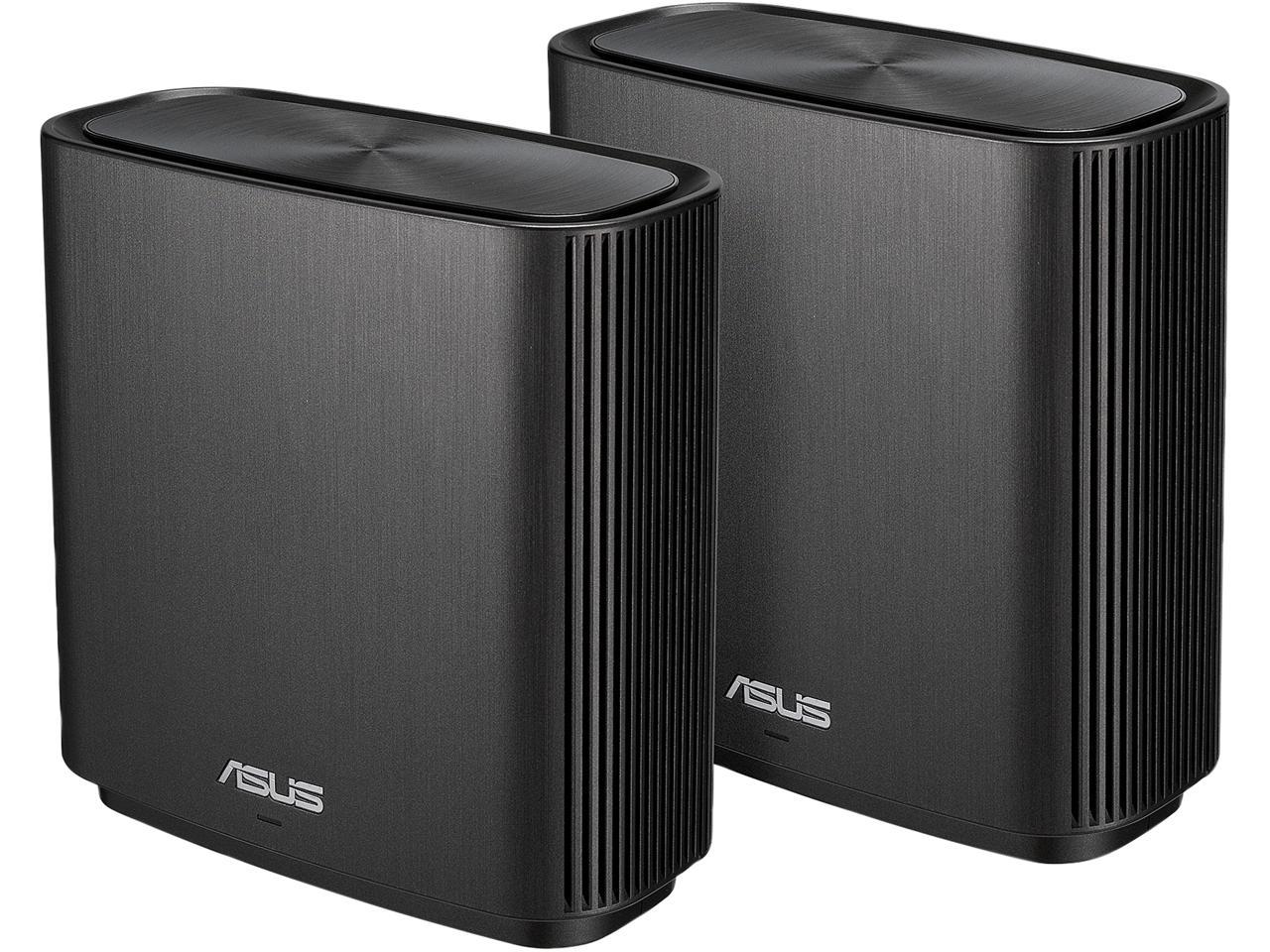 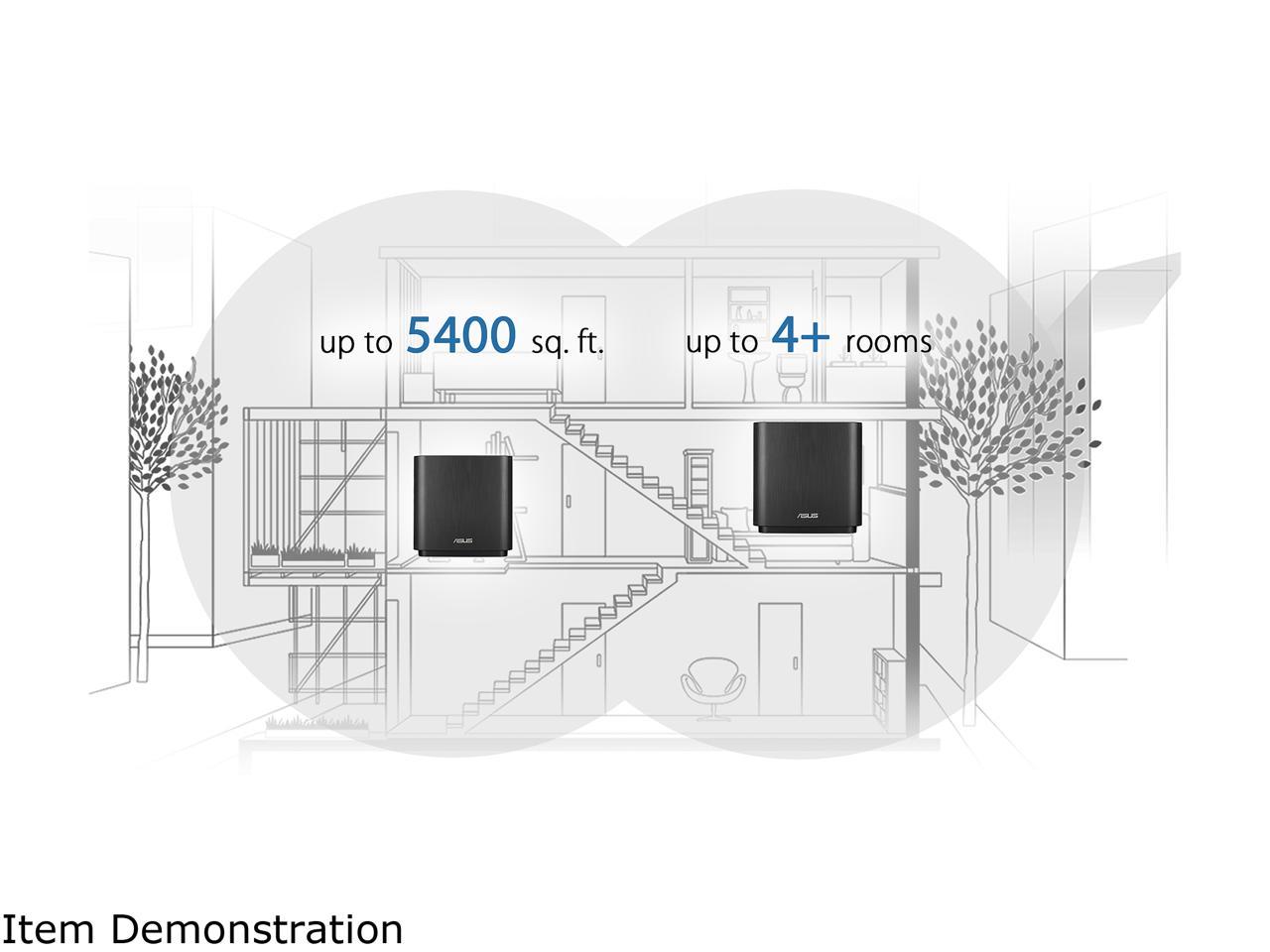 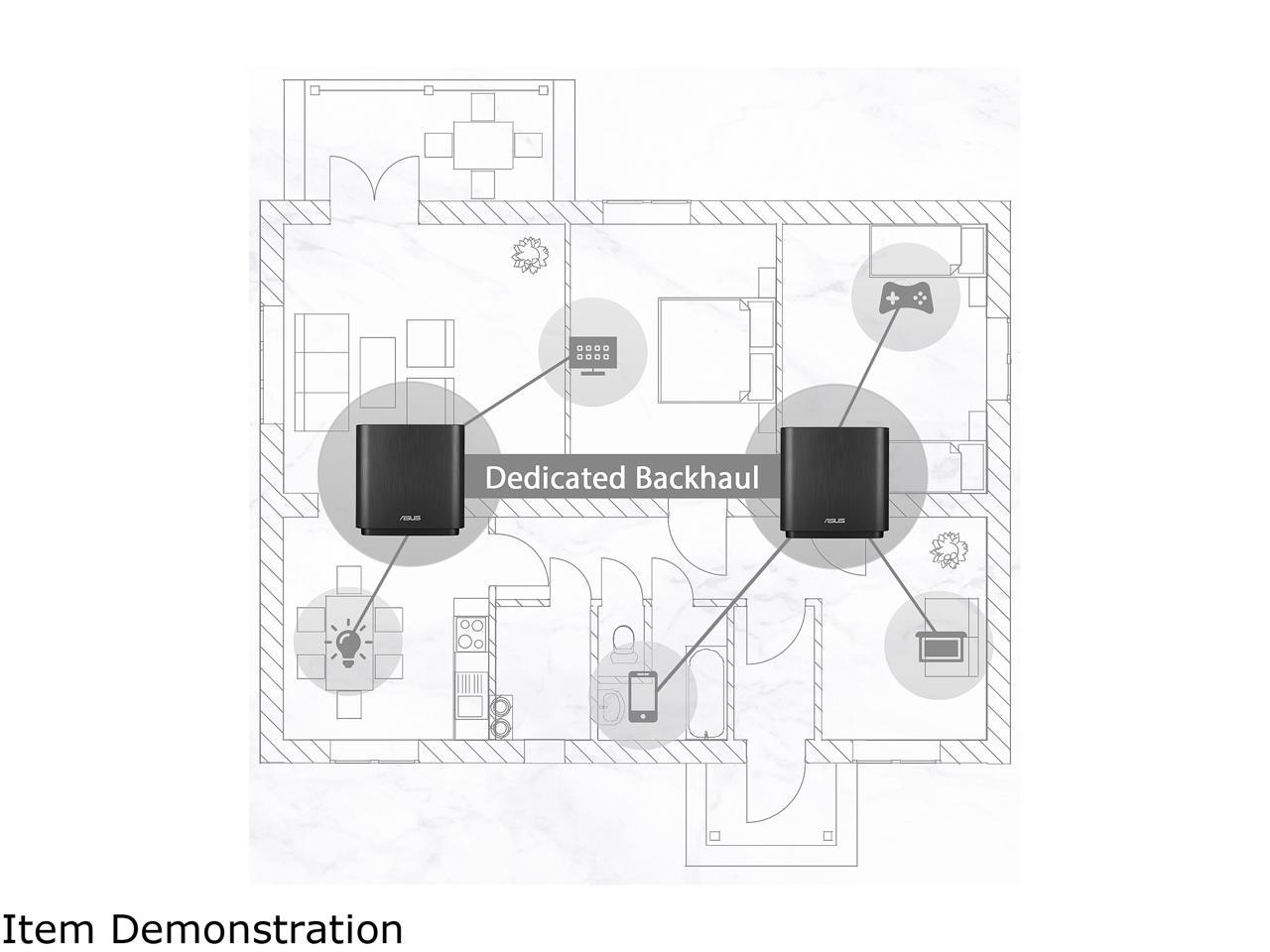 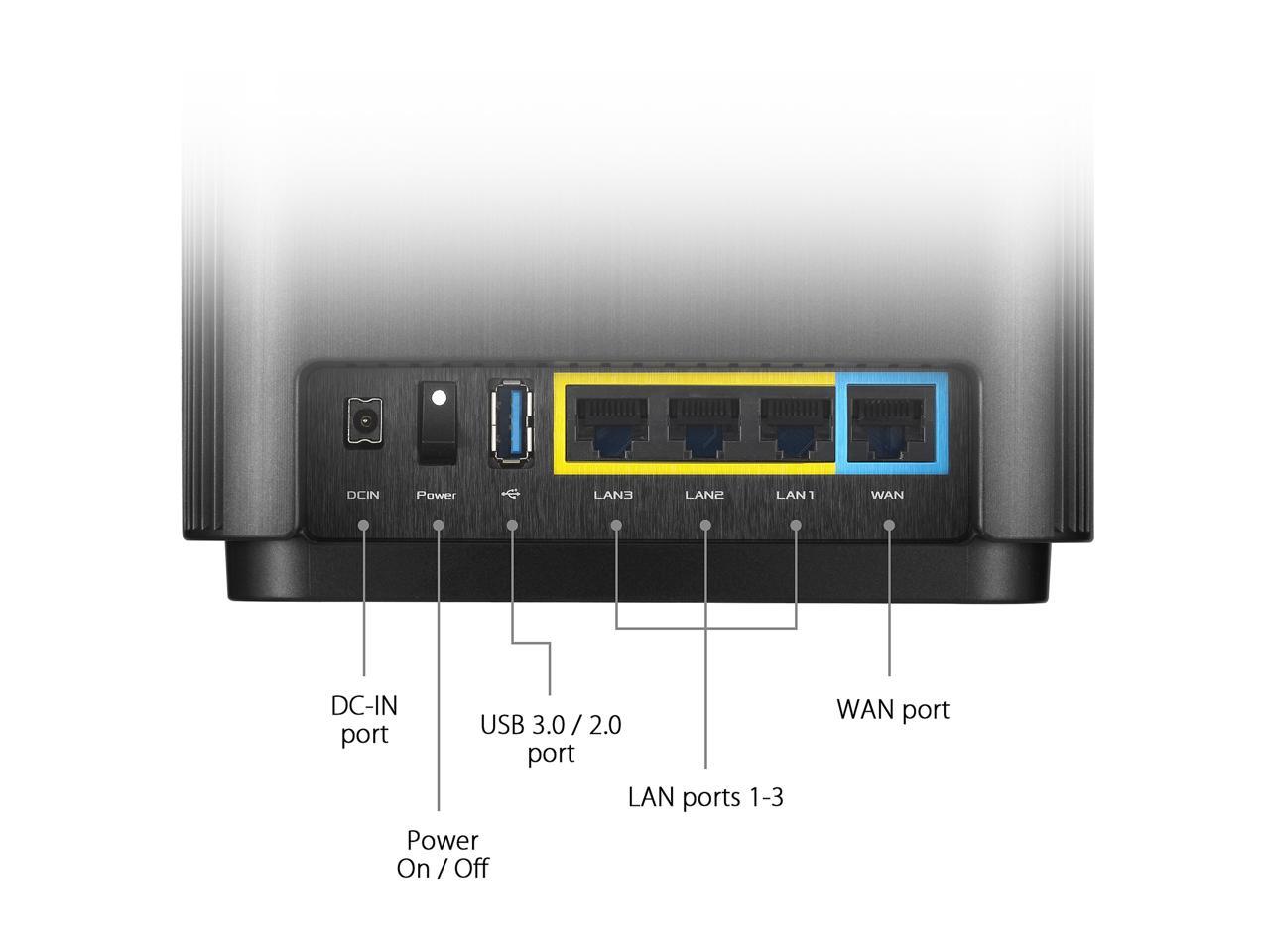 Pros: - two identical routers included - very inconspicuous, non-intrusive and sleek design with a solid build quality - setup is super easy, almost completely automatic - works seamlessly with existing aimesh-enabled routers so you can use your old router as a node - strong WiFi signal provides great coverage of up to 5400sq ft and very decent range - almost wired-level gigabit speeds over WiFi - feature-packed app and web-based interface - easy to set up user profiles and parental controls - built-in free lifetime protection from intrusion and malicious attacks - advanced intelligent Quality of Service settings for uninterrupted data flow at critical times - powerful quad-core processor and tons of ram - dedicated wireless backhaul is incredibly fast - able to use Ethernet backhaul instead, which frees up the second 5ghz band for your devices - option to use three separate SSIDs or consolidate into a single SSID - adding additional mesh nodes is accomplished with just a single step - 2.4ghz-only smart device friendly - six internal, high-performance antennas - 8 Ethernet ports total, and you can use all the free Ethernet ports for devices - has USB 3 for faster file transfer to aicloud disk - able to function as a aicloud drive by connecting an external hard drive - WPS Button underneath for fast device link-up - can be set to access point or repeater mode - aimesh roaming actually works and steers devices to the best possible connections Q - I love that you can disable the front LED - has substantial weight, and its non-slip base keeps it from being pulled and tipping - easy integration with Alexa and IFTTT. Can enable guest WiFi by voice command - IPTV-friendly - small and lightweight power adapter cube with velcro cable ties - very decent value for what you get In terms of features and performance - 2 year warranty

Cons: - too many settings makes it too easy to cause problems through user error - app looks amazing visually but feels unfinished; some settings don’t seem to work as intended Or at all, like disabling the dedicated wireless backhaul doesn’t disable it - wireless backhaul can be slow if routers are more than 15 feet apart and if there is more than one wall between the two nodes - app controls all routers as if they were one, so you can’t change settings on individual routers in the system

Overall Review: Everything I had hoped for in a mesh system! Spoiler alert... I am absolutely in love with this system. I was at first unsure about the whole “mesh WiFi ” idea, and I had tried a couple of systems that didn’t live up to my expectations and was about to go back to my trusty AirPort Extreme when I happened to come across the ASUS ZenWiFi CT8 whole-home mesh wifi system. Now I will admit it was purely the design of these things that I fell in love with first, followed by its impressive list of features and some pretty impressive specifications. Just looking at the box this system comes in, you just know you’re getting a quality item inside. The box itself is simply gorgeous... I’d actually be sad to throw it away. Inside, I was greeted by two identical routers, well-protected in form-fitted egg crate packaging. Interestingly there was no manual included, and none could be found online either, although the interface is familiar if you know Asus routers and their awesome User-friendly firmware. The power adapters are very small and light, and resemble iPad chargers. The Velcro strap that’s on the power cable to keep it tidy is a nice touch. These routers are gorgeous. I really love the look of the sleek black finish with the brushed-metal texture. Picking one of the units up, I was impressed with the weight of it. Shining a light inside the vents I could see some substantial metal heatsinks inside, which gives the product some good heft. And the silicone base covers the entire bottom of the unit, keeping it firmly in place and safe from sliding or tipping over. The air vents are attractive and well-designed for maximum air flow to keep these powerful routers cool. Setting up the system was very straightforward and only took about 10 minutes to get fully up and running. You have the option to set the system up either through a web browser interface, or the Asus Router App with your iOS or Android device. I tried both methods and although they look slightly different visually, both methods accomplished the same result. Basically they’ve made the setup process almost automatic, only prompting you to enter a user name and password and an SSID. I appreciated that they’ve included option to split my WiFi network into three SSIDs so I can control which devices connect to my 2.4ghz band and which would be better served by the faster 5ghz bands. Once everything was all set, I was stunned at the speeds of the wireless backhaul. When I tried a speed test with the units about 20 feet apart I reached speeds of around 350Mbps which I thought was quite impressive. But I have Ethernet cables running throughout the home so I was able to connect them hard wired to get the full speed I pay for from my ISP which is 600mbps. I get this speed all over my house and yard and I love that my phone signal never gets dropped as I move from one point to another. The aiMesh roaming capabilities are impressive and seems to work flawlessly, almost always keeping me on the closest node giving me the best experience possible. Even with around 35 devices on my network, both wired and wireless, I just can’t seem to trip up this system at all. I even tried streaming high definition AND 4K video on every display in the house simultaneously - 11 video streams - and still couldn’t break the ZenWiFi. It didn’t even buffer the videos at all, and there was no degradation or skipping of the picture whatsoever. I was very impressed with this system’s overall performance. I actually loved this system so much that I felt confident enough to purchase the wifi 6 version of the ZenWiFi to extend my coverage and capabilities even more. Who is this system for? I think this system would be perfect for homeowners or small business owners who are looking for a truly set-it-and-forget-it Home Networking experience while still having the advanced configuration options power users need. It’s also a great system for those who need the flexibility to add to their system as their WiFi requirements grow. And if you’re looking for a mesh WiFi system that delivers your true maximum internet speed pretty consistently, then this system is for you. (Mine is 600mbps and I often get 650 on WiFi.) And since you are getting two identical powerful routers in one box, you’re getting excellent value for your money as well. I think ASUS has hit it out of the park with the ZenWiFi system. And with the two year warranty, I expect these to provide years of trouble-free WiFi. I hope you enjoyed my review and found it helpful!