Feel 100% satisfied with your purchase -- with no restocking fees & no return shipping costs* within 30 days of delivery. Learn More
Price Alert
Add To ListFound on 39 wish lists 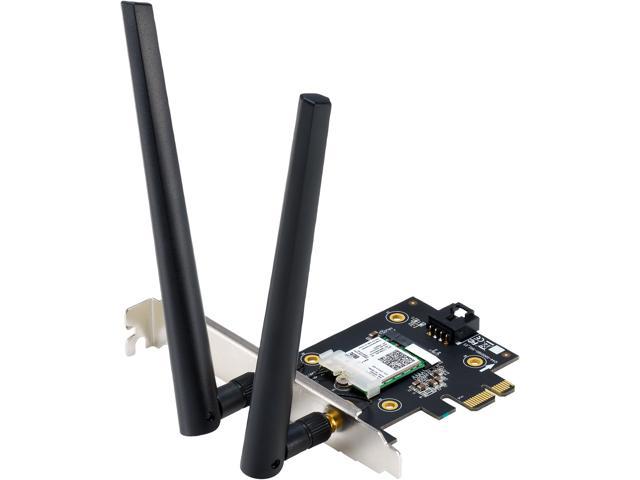 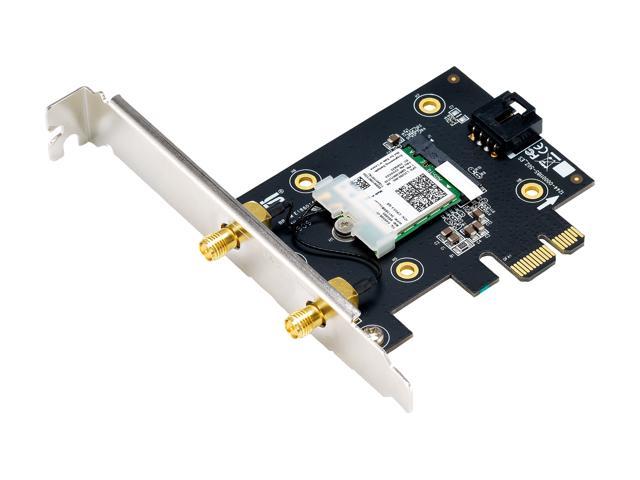 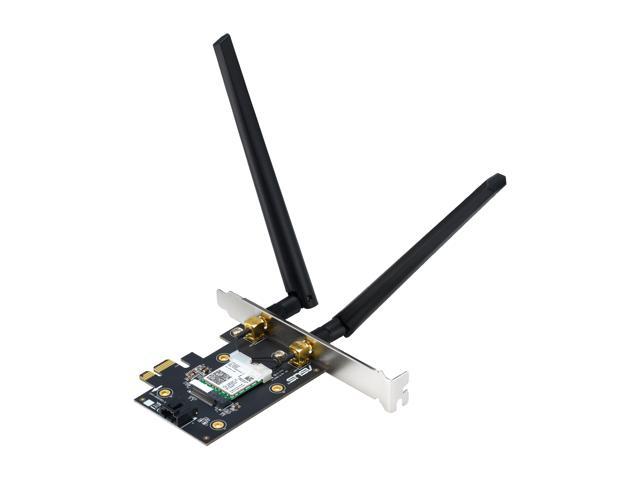 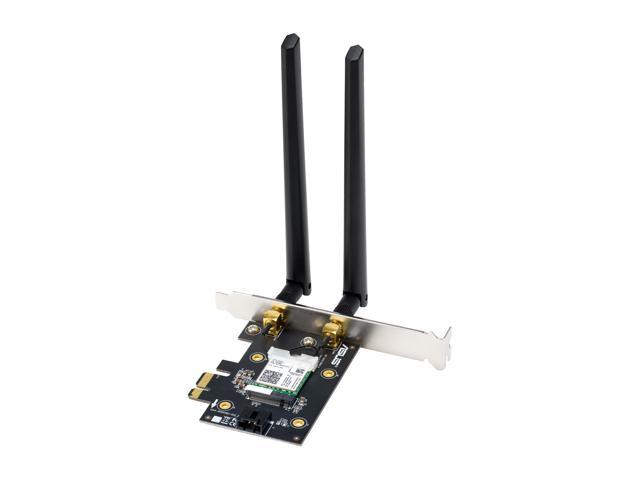 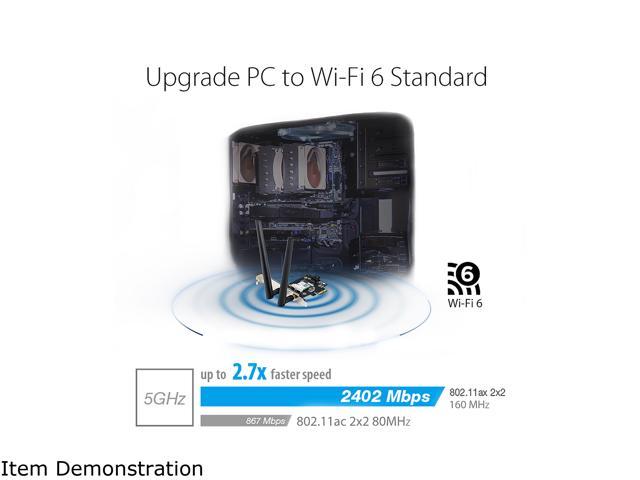 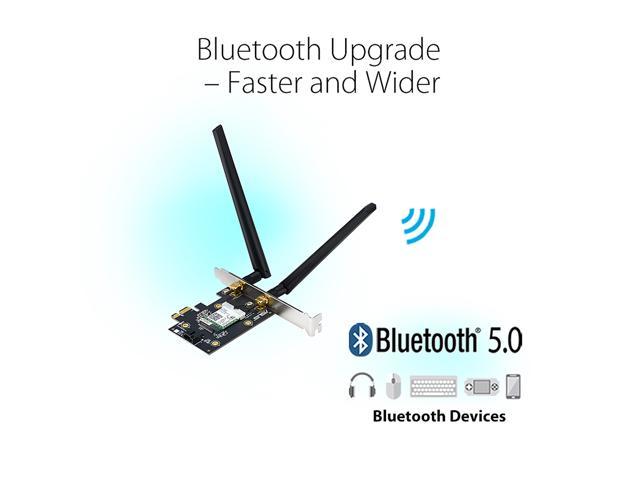 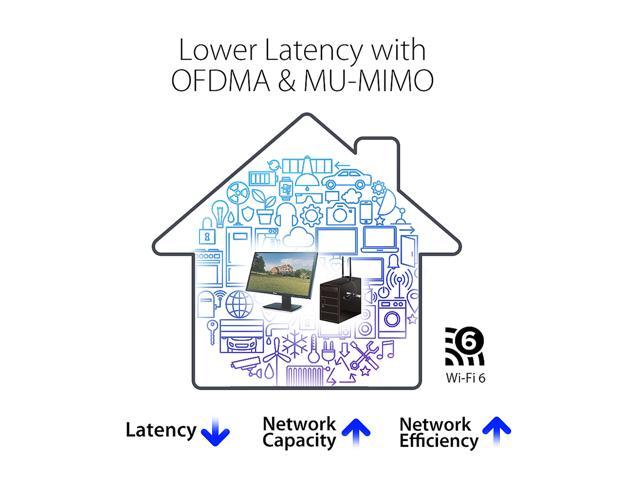 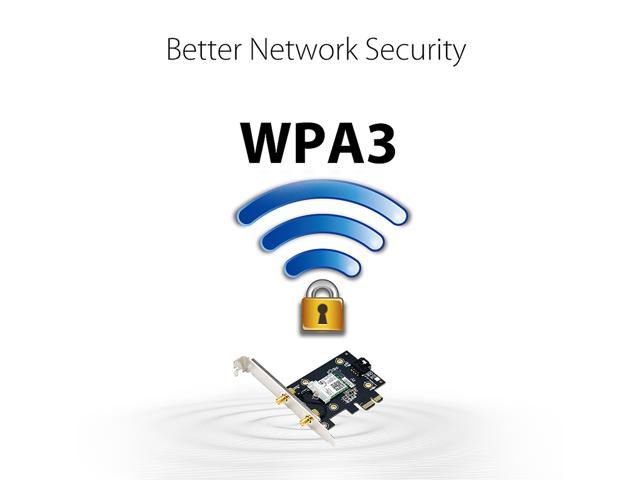 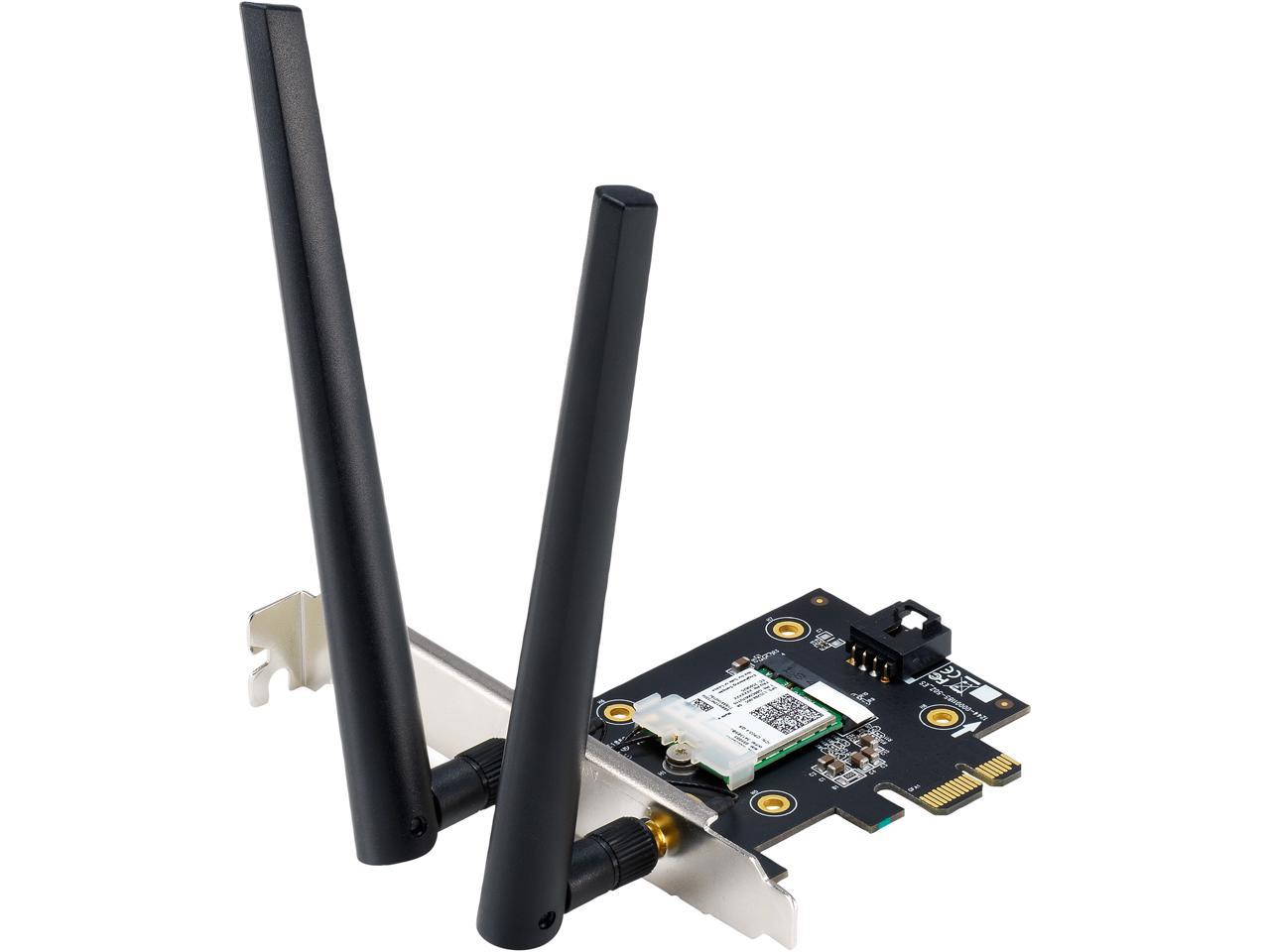 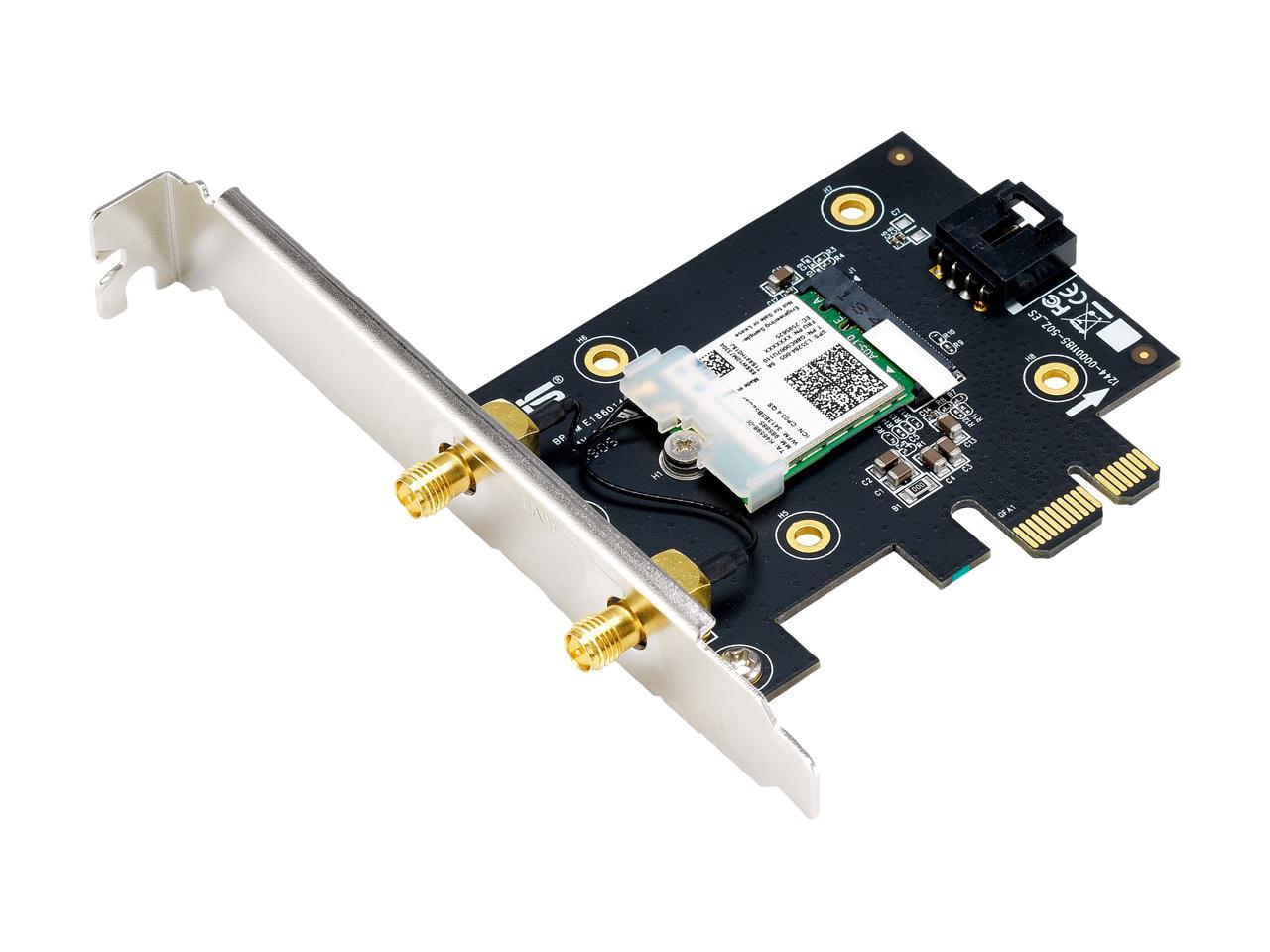 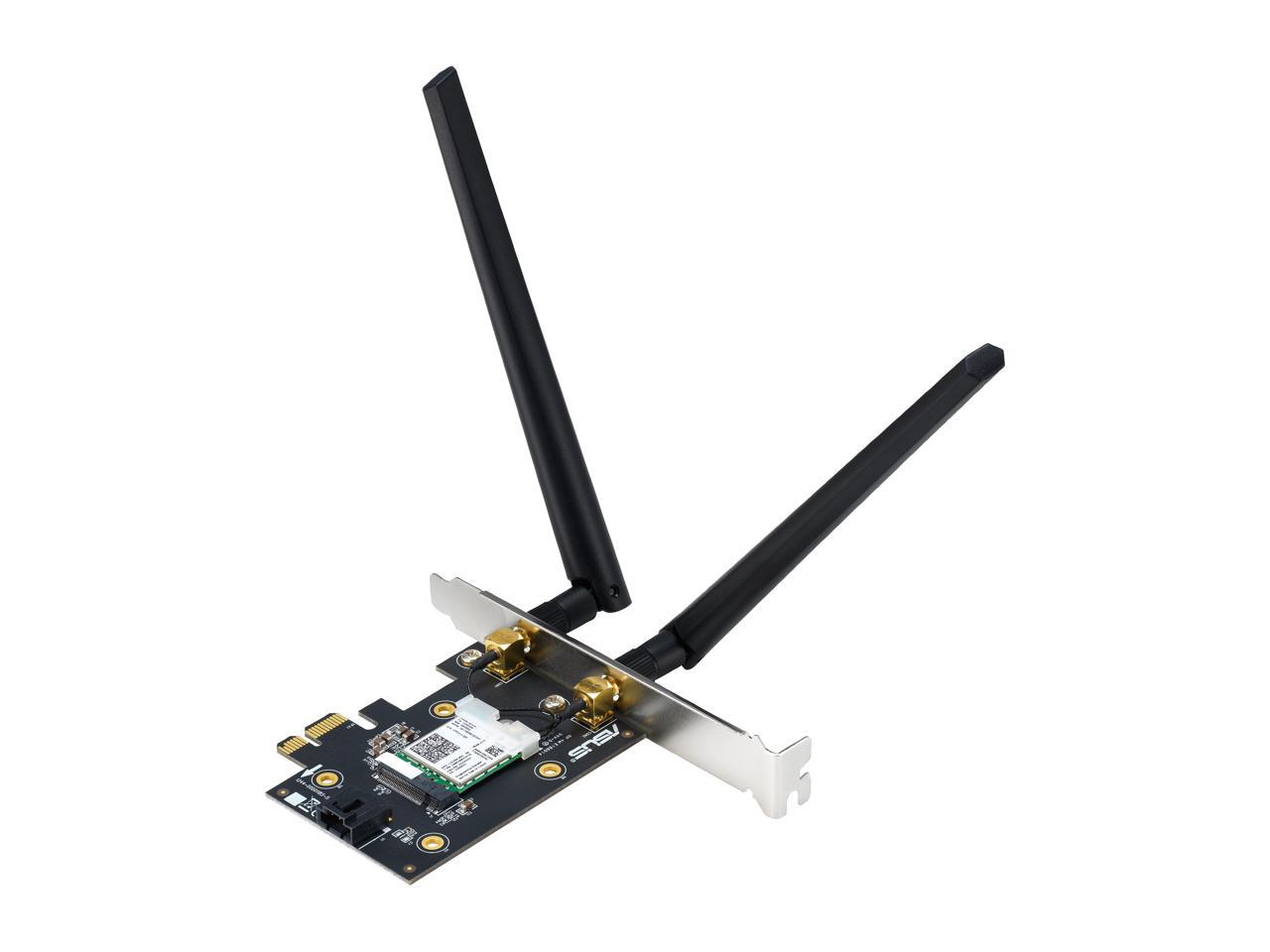 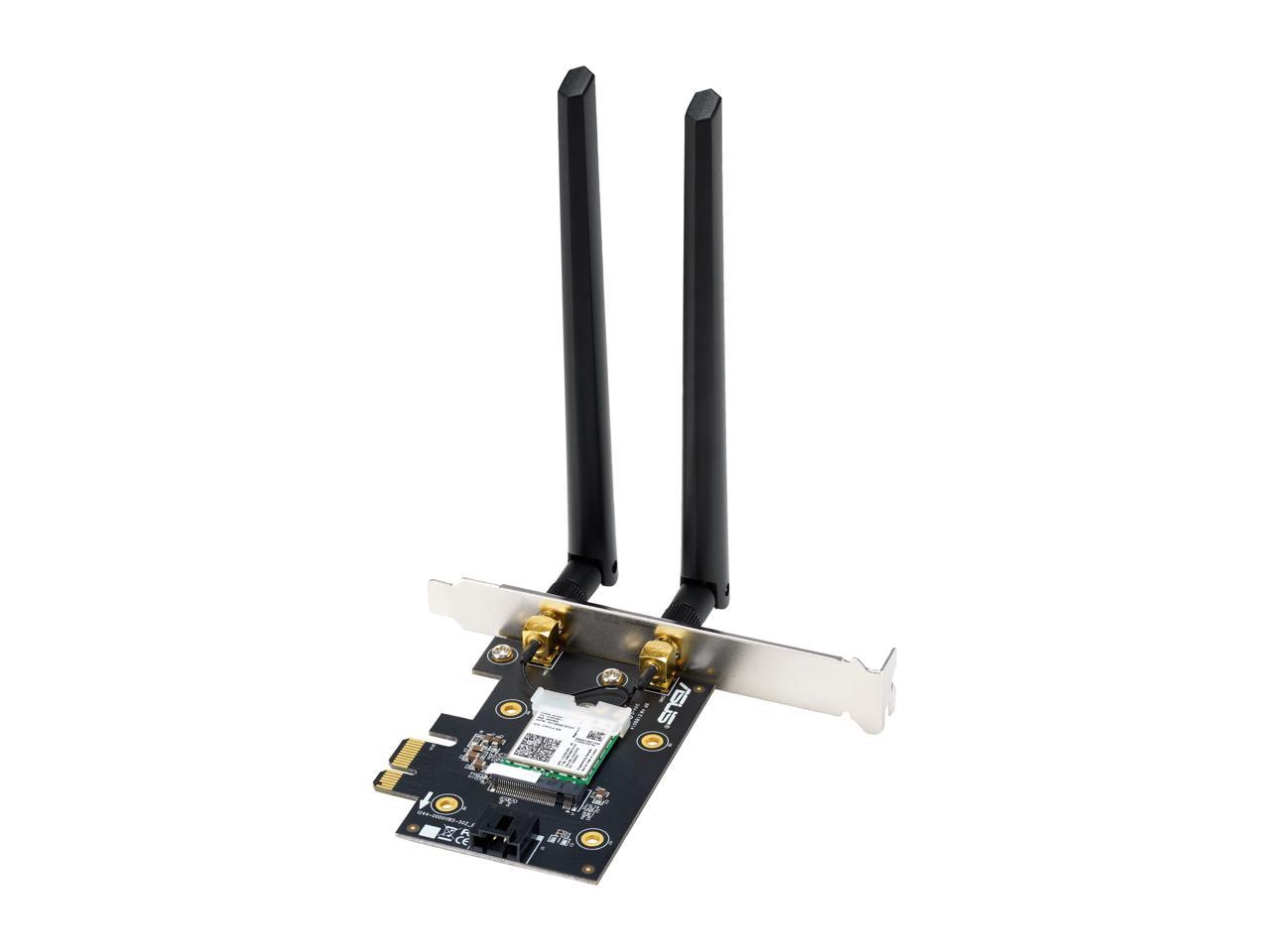 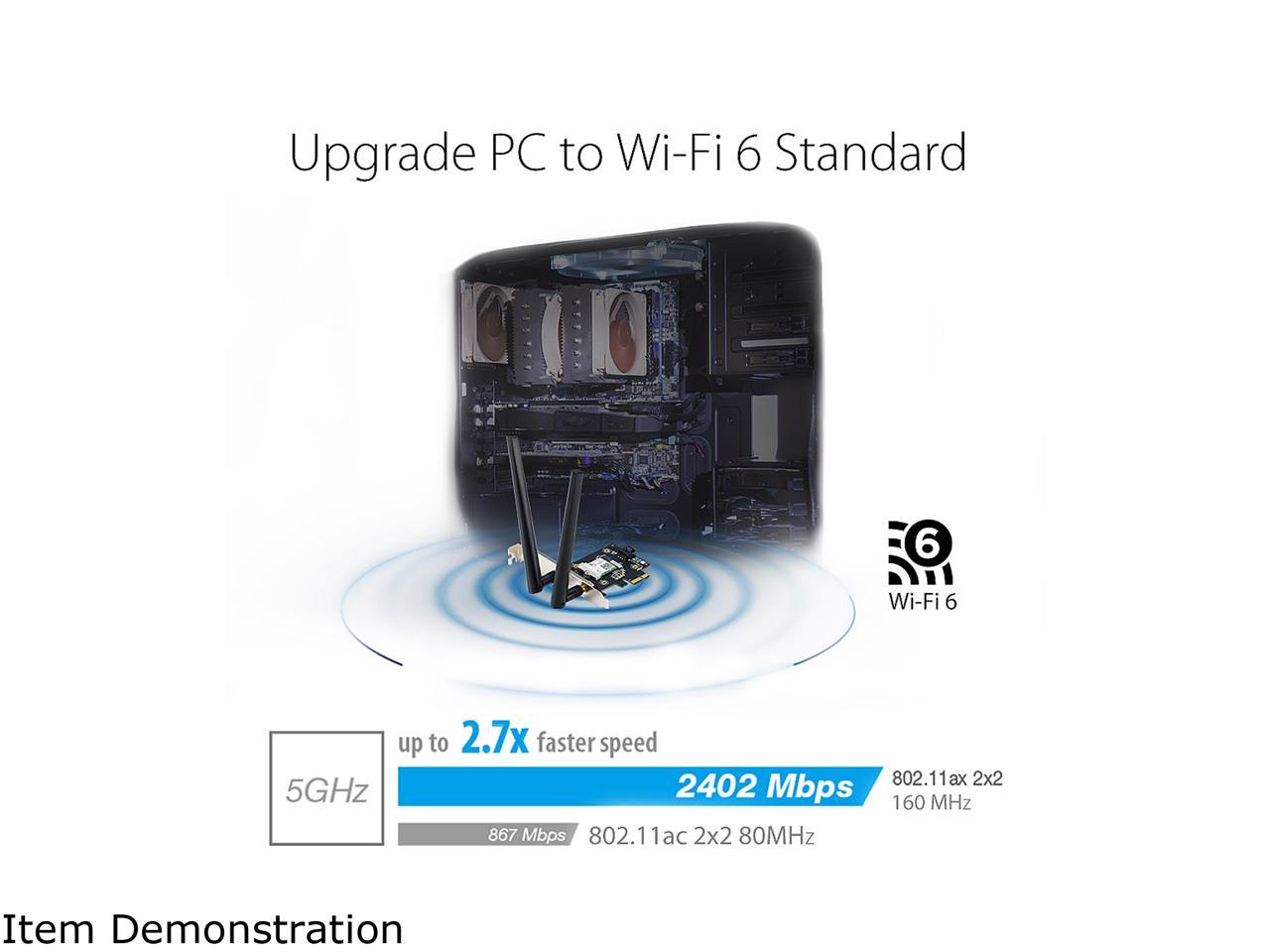 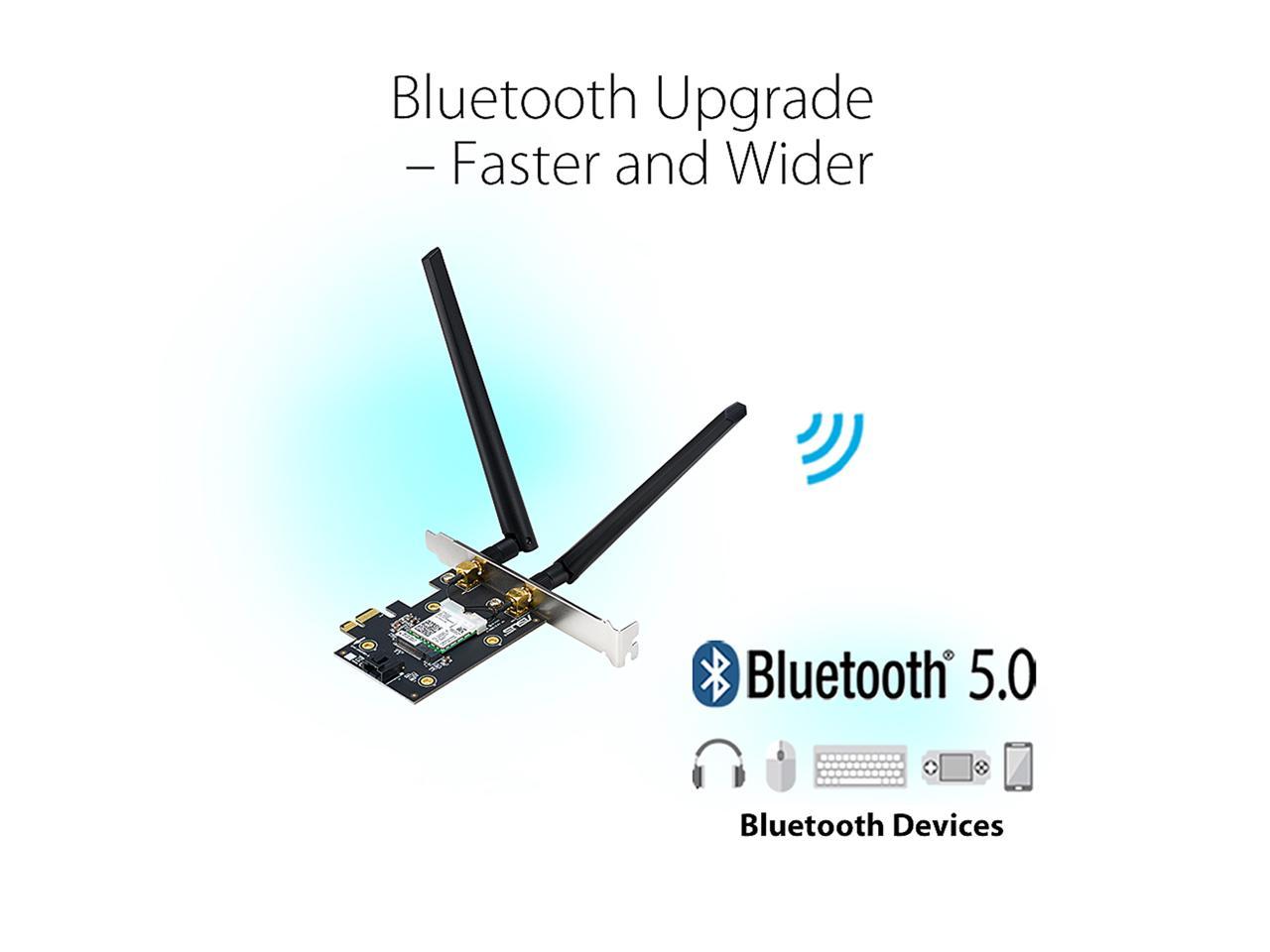 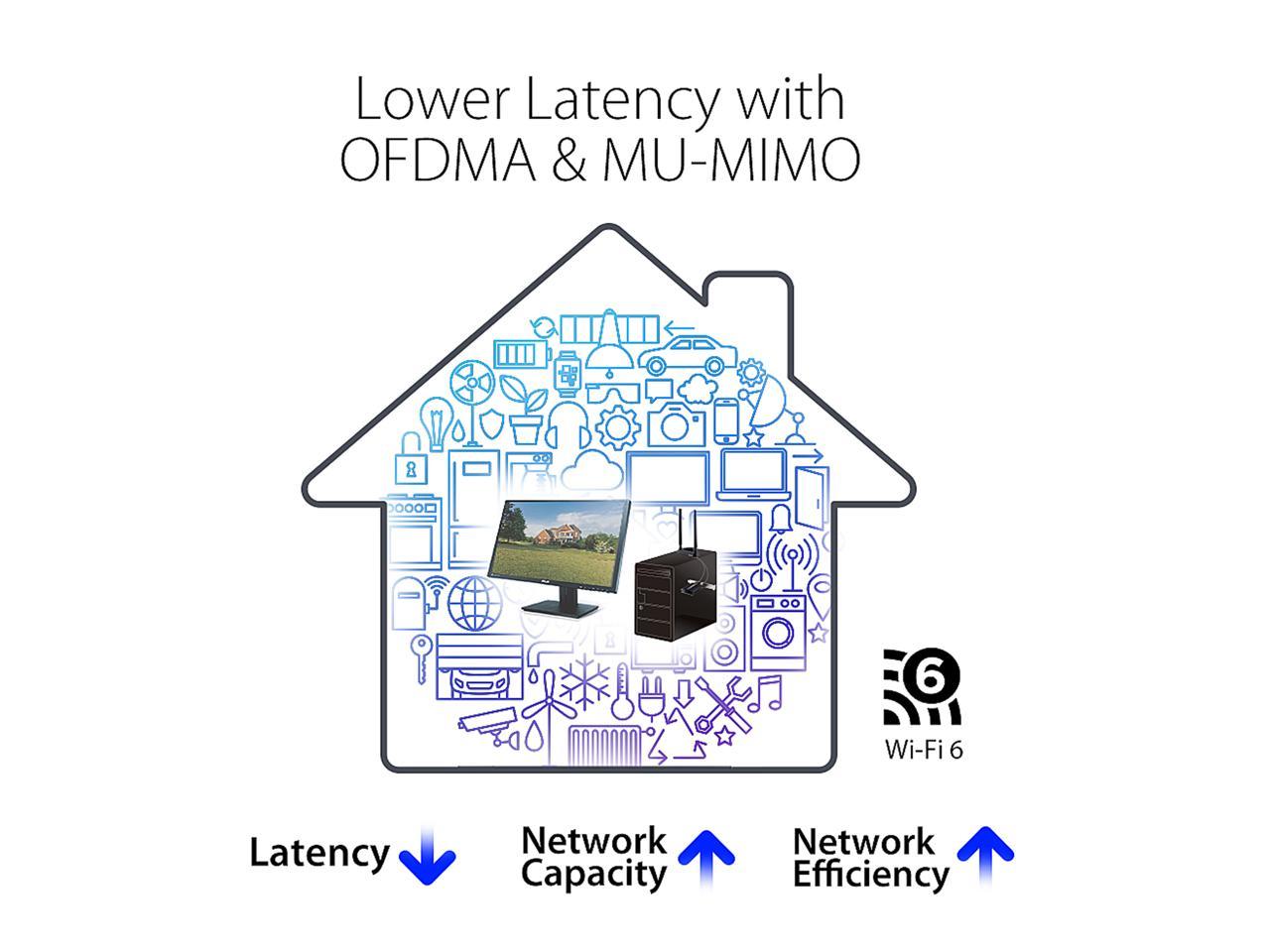 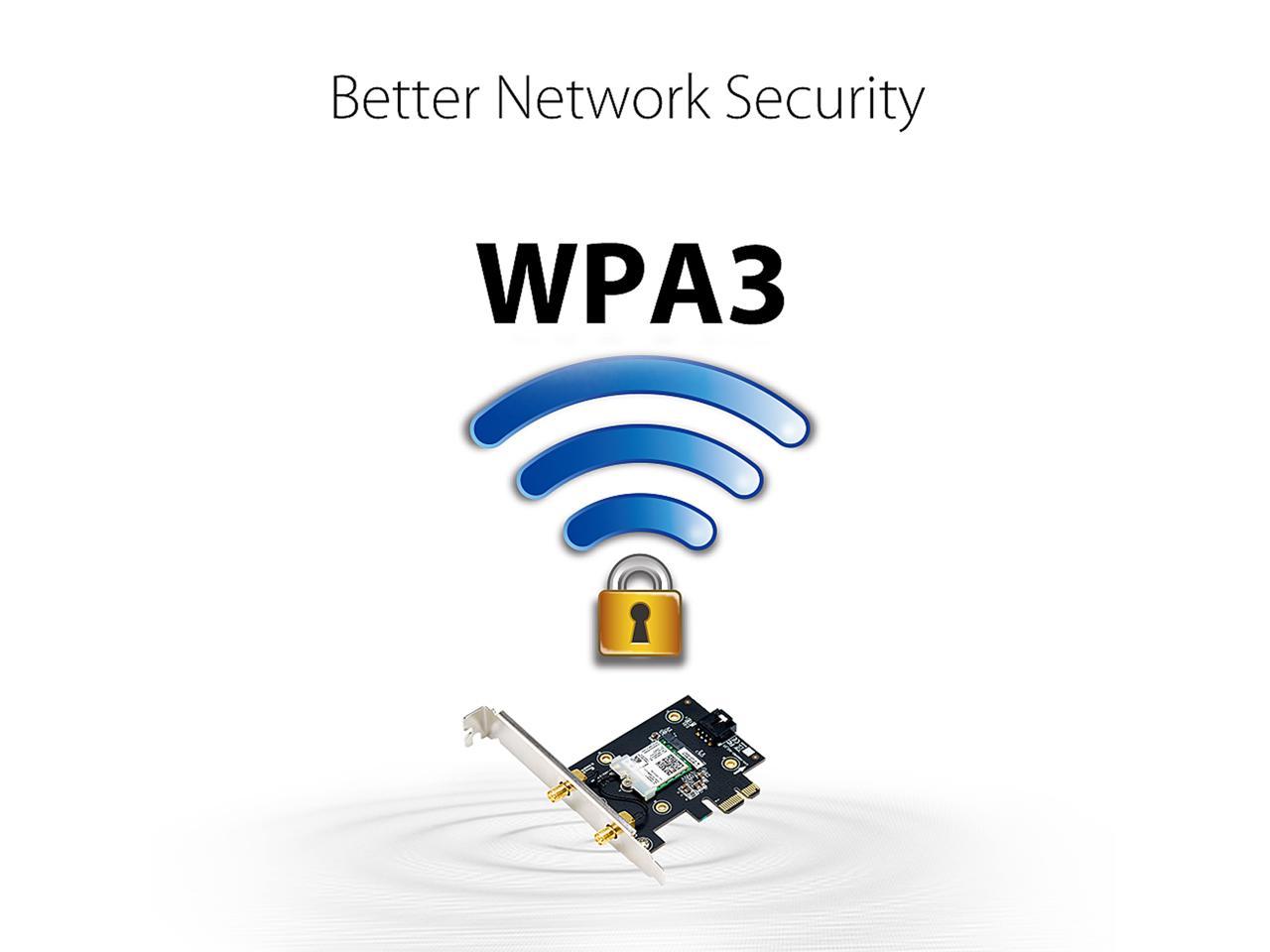 Learn more about the ASUS PCE-AX3000

Cons: the only downside is the bluetooth requires you to plug in to a usb header on your motherboard. mine were full so had to unhook something else to get it working.

Overall Review: i can recommend it for its signal and driver support. if you don’t need bluetooth it’s a slam dunk. if you do make sure you have free headers. it uses a little 2x5 block with one of the corner holes plugged common on many motherboards

Pros: Older-ish Desktop PC with no wireless capabilities so I bought this card mainly for Bluetooth to use my headset with. It works soooo much better than the Bluetooth dongles out there..

Cons: Downside is you will need you motherboard make/model to see where to plug the USB cable into. It is not "just" a PCI card. You could probably figure out where it plugs into without the manual but better to be safe than sorry.

Cons: - Installation instructions are a little vague, and require booting with the card installed but without USB connected first. And then they seem to want you to hot-plug the USB in. I did this but it made me nervous. It worked out fine in the end. - Driver installer program on the CD does not actually work. I got a bluescreen in Windows 10 halfway through the install, after taking several tries to get it to even launch. I finally got it to install using Windows' Device Manager. I found the unknown device attached to my PCIE slot and did an "update driver", then browsed to the folder on the CD with Windows drivers in it. That worked fine. - Bluetooth audio has noticeable delay (while watching video). Not sure if this is a problem with the PCE-AX3000 or with my cheap Bluetooth earbuds.

Overall Review: I should have read the instructions, first. I jumped right in and connected everything to my (powered-down) computer and it wouldn't boot. Oops. Turns out you need to boot with the internal USB (for Bluetooth) disconnected first, then install drivers for the WiFi card, then plug in the USB and install the Bluetooth driver. Then I had trouble running the installer program (bluescreen!) but using the "Update driver" feature in Windows Device Manager, and pointing it at the drivers folder in the CD, worked fine. After getting past that installation snafu, everything seems to be working OK. It shows in Device Manager as "Intel(R) Wi-Fi 6 AX200 160MHz" which I understand is the chip used on the card. I bought this product to replace an ancient USB WiFi adapter with only 2.4GHz support. The old adapter kept disconnecting randomly from my wifi even with the router in the same room, then refusing to reconnect until the router is rebooted, and furthermore does not have any manufacturer-supported Win10 drivers. The ASUS PCE-AX3000 has full strength connection, can connect just fine to both the 2.4GHz and 5GHz networks on my router, and comes with Bluetooth which was not previously present on my PC. A nice upgrade! Overall I'm happy with my purchase.

Overall Review: Over all it went in smoothly i popped the cover plugged everything in started my computer ran the wifi and blue tooth set ups. Have had no problems at all.... so basically anyone with half a brain can install and run this card

Cons: - As with most WiFi cards and accessories, the antennas don't stay tight on the card's external connectors -- they'll eventually slip and loose the position you set them in. Finger-tight doesn't really cut it -- you really need to wrench these connectors down if you want them to stay. If I wasn't worried about breaking the plastic pieces, I'd use pliers to tighten them.

Overall Review: I was looking for a solid PCIe WiFi 6 card for my Linux machine, and this Asus card doesn't disappoint! It's been reliable, fast and compatible. I believe I had to install the iwlwifi firmware package on Debian, but after that, it's been smooth sailing. I'm sure this card would do even better with Windows, as well. It would be nice if there was some safe solution to keep the antennas from loosening so easily.

Overall Review: This is actually two devices in one: a high quality pcie wifi adapter, with a basic USB bluetooth adapter stuck on. The bluetooth chip even requires you to run a separate cable to an internal USB header - it does not communicate through the pcie interface, and I don't think it makes use of the antennas. I purchased this to use with a bluetooth Xbox controller, but the connection is so unreliable that it fully cuts out every minute or so and has to reconnect. I've had to keep the controller connected by a USB cable instead. I'm keeping the product for its wifi function, but I'm going to have to buy another bluetooth adapter.

Manufacturer Response:
Dear Matthew N, It's unfortunate to hear that the Bluetooth is not working as expected. All our products do go through an intensive quality control testing process to ensure that customers get units that are in proper working condition, what you've experienced was not intentional and this was a random case. Have you completely reinstalled the driver? Please refer to the link below. For further troubleshooting, feel free to reach out to me at customerloyalty@asus.com and provide this link for reference. I'll do my best to provide a quick resolution to your case. Your feedback is important as it helps with improvements to ASUS Support channels. Thank you for choosing ASUS! Best Regards, Jamalie, ASUS Customer Loyalty US Support Driver: https://www.asus.com/Networking-IoT-Servers/Adapters/All-series/PCE-AX3000/HelpDesk_Download/
Anonymous
Ownership: 1 week to 1 month
Verified Owner
Perfect1/12/2022 10:05:09 AM