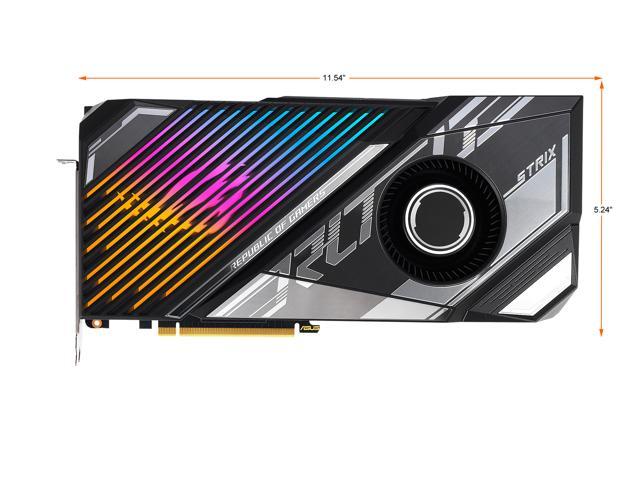 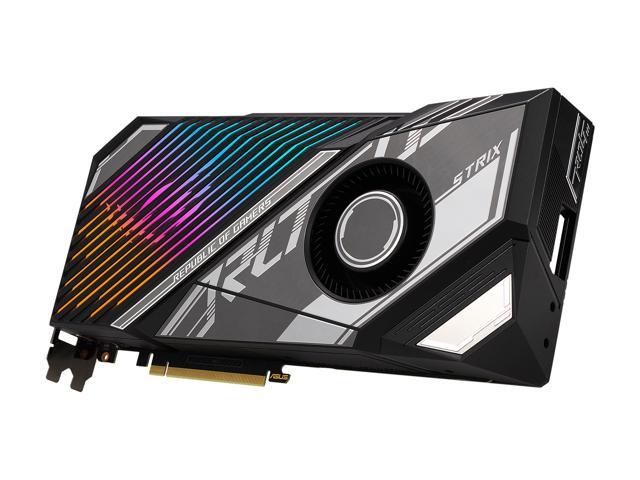 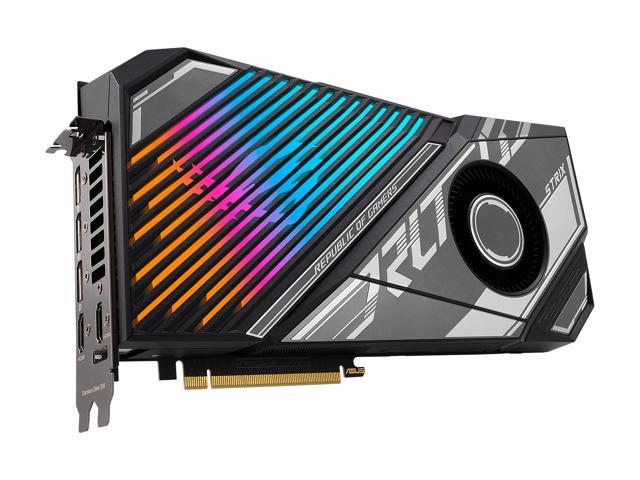 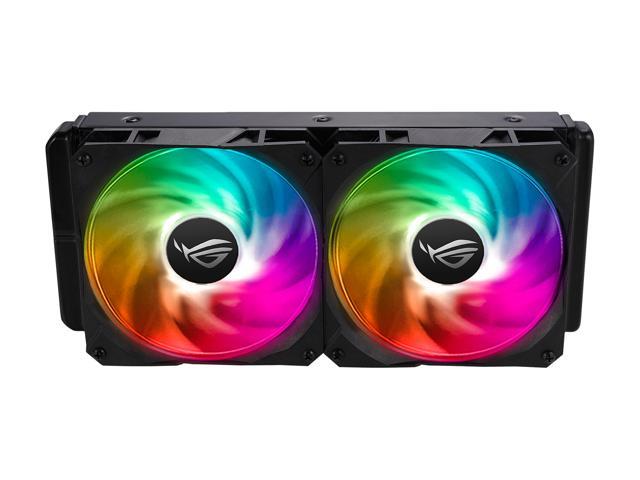 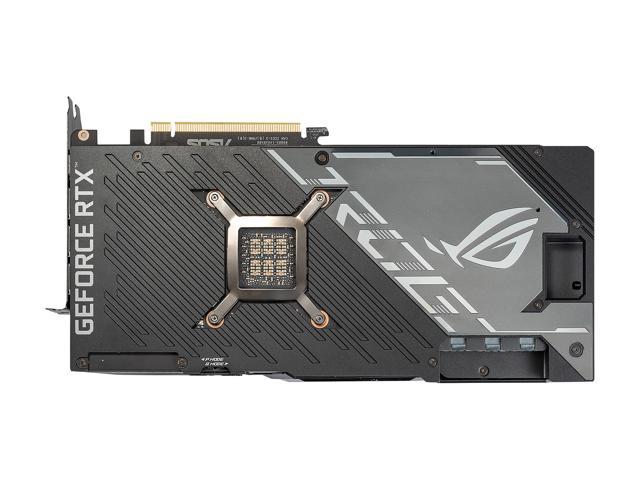 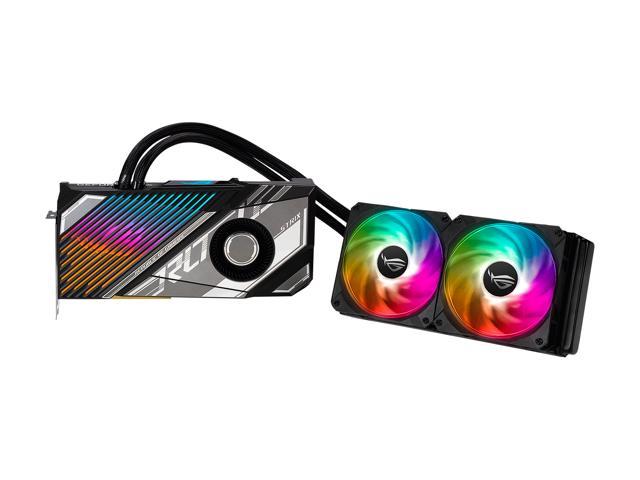 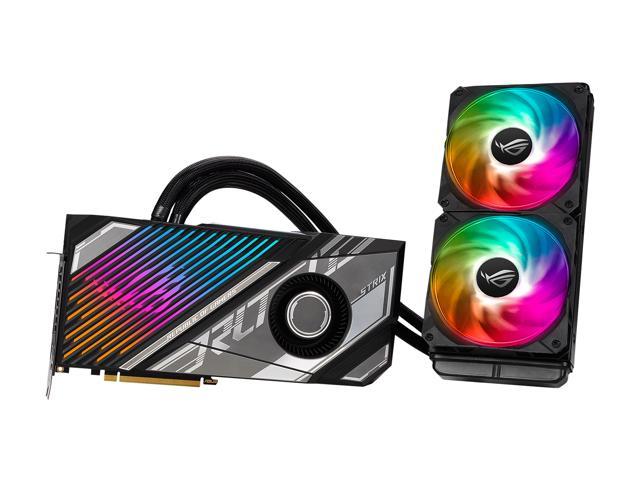 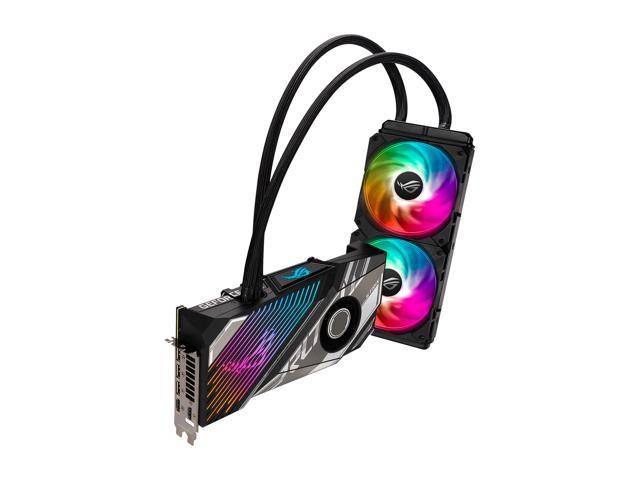 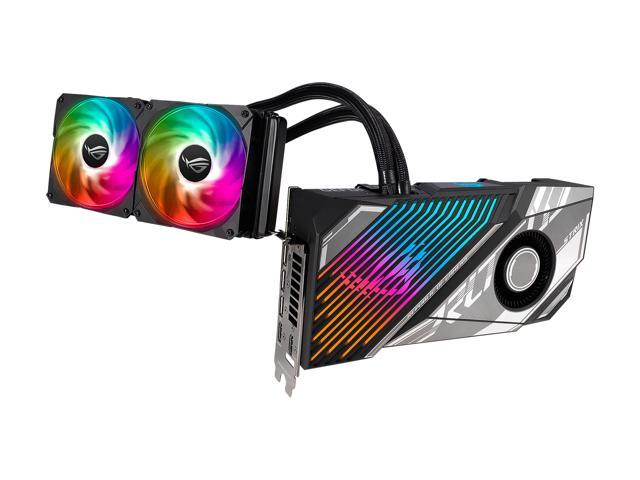 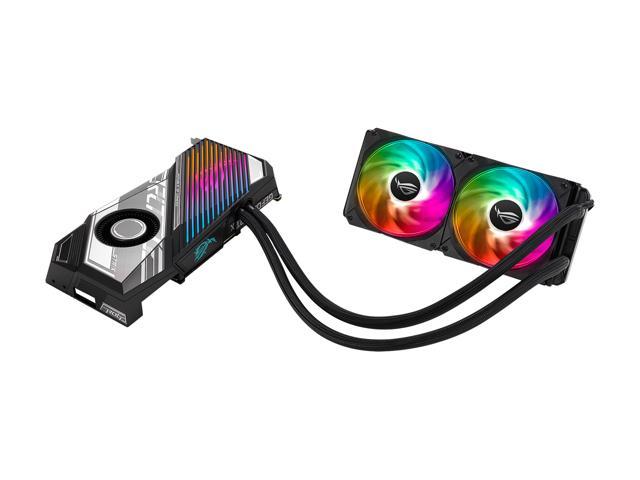 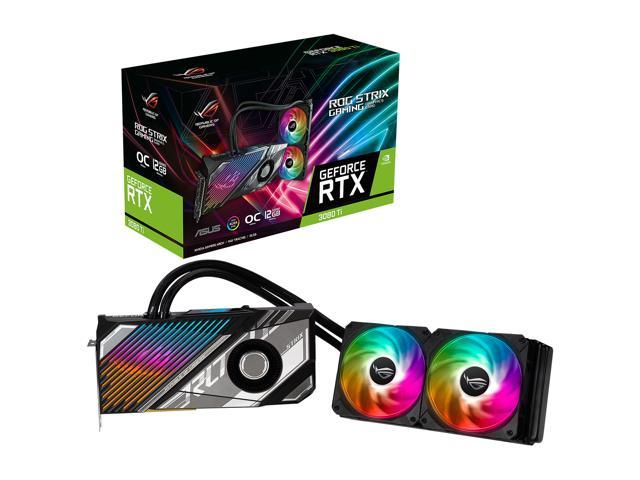 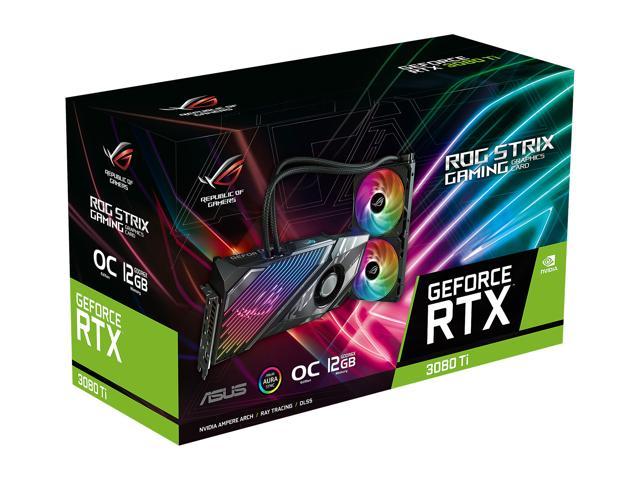 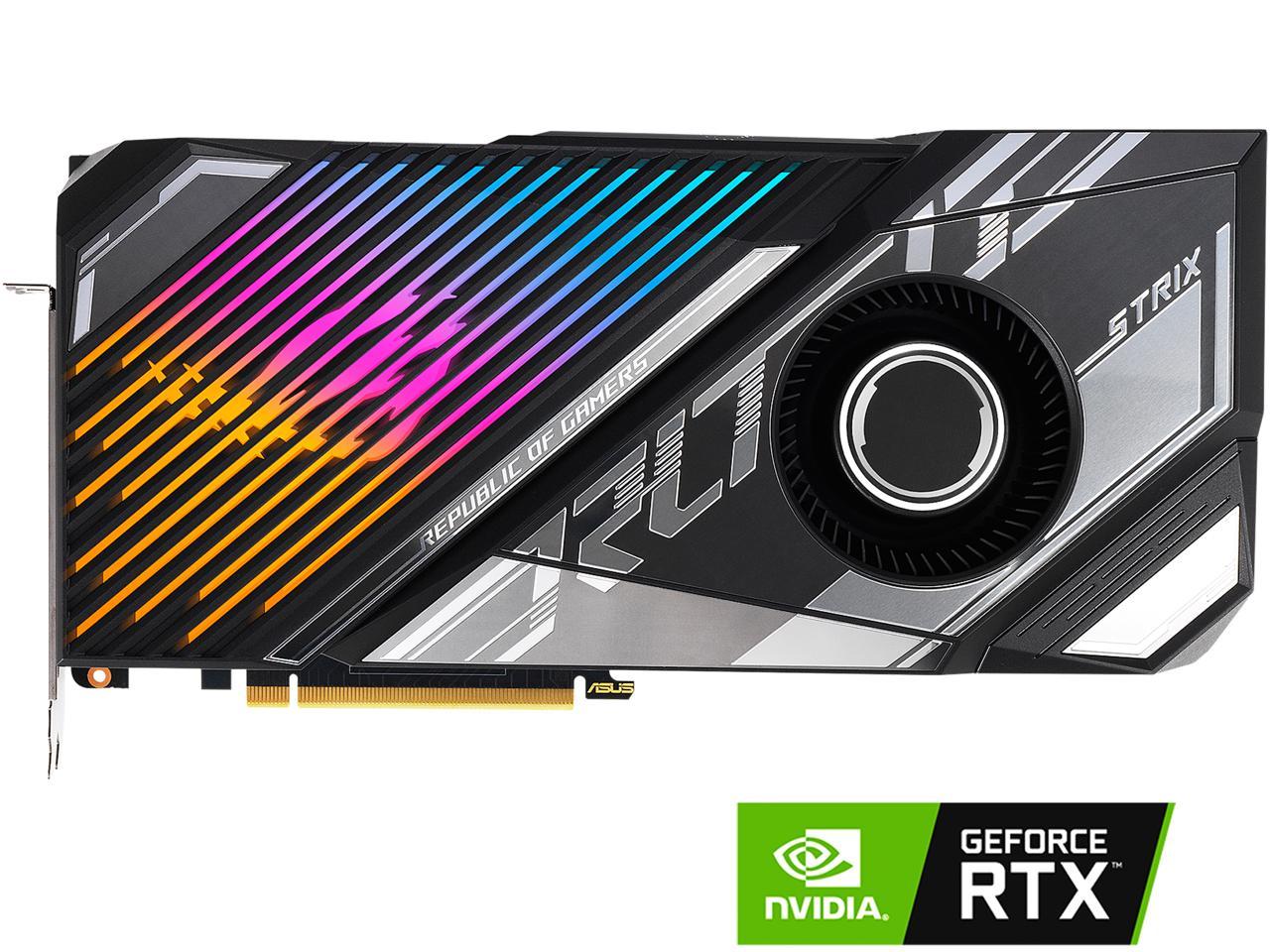 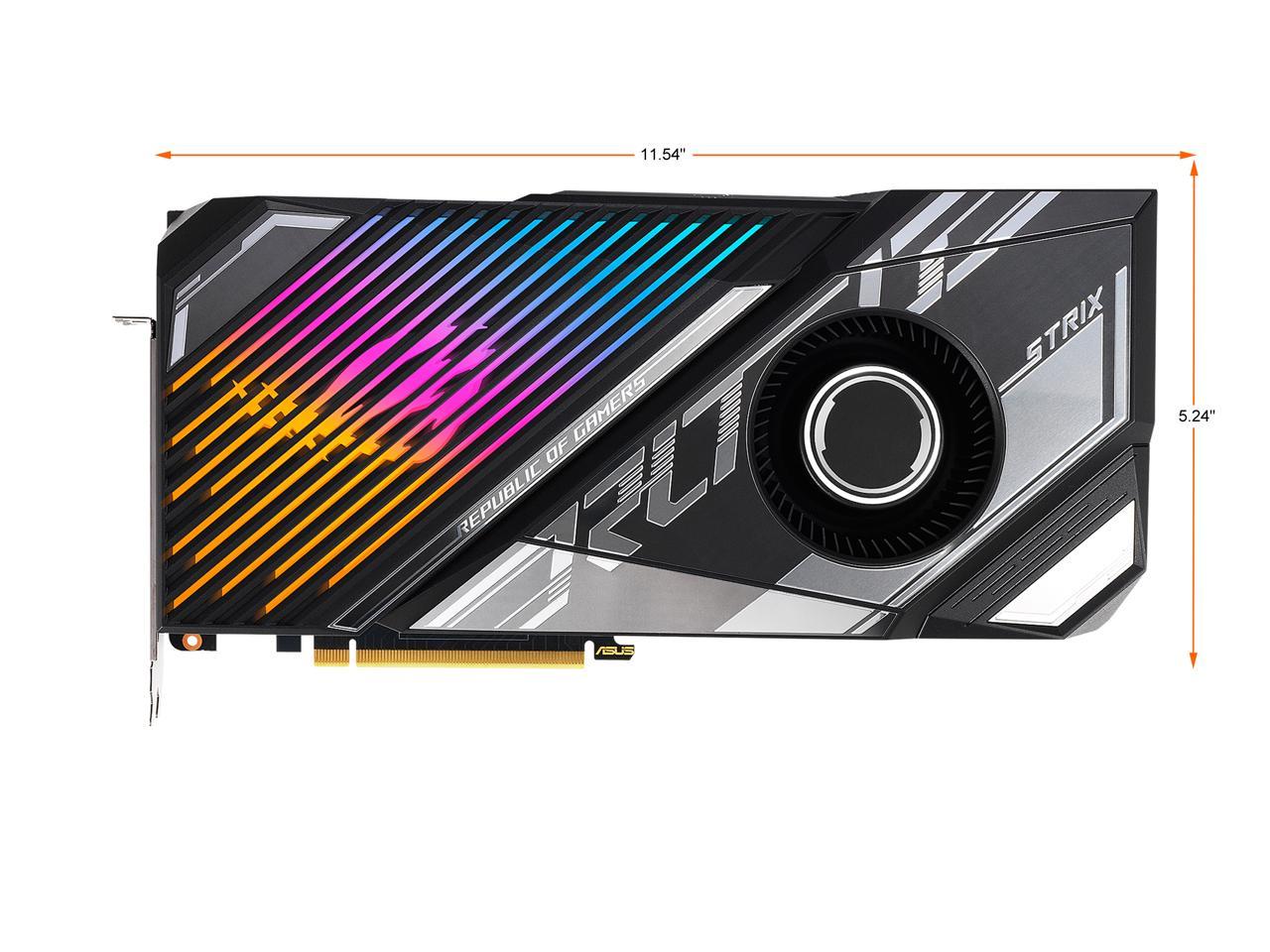 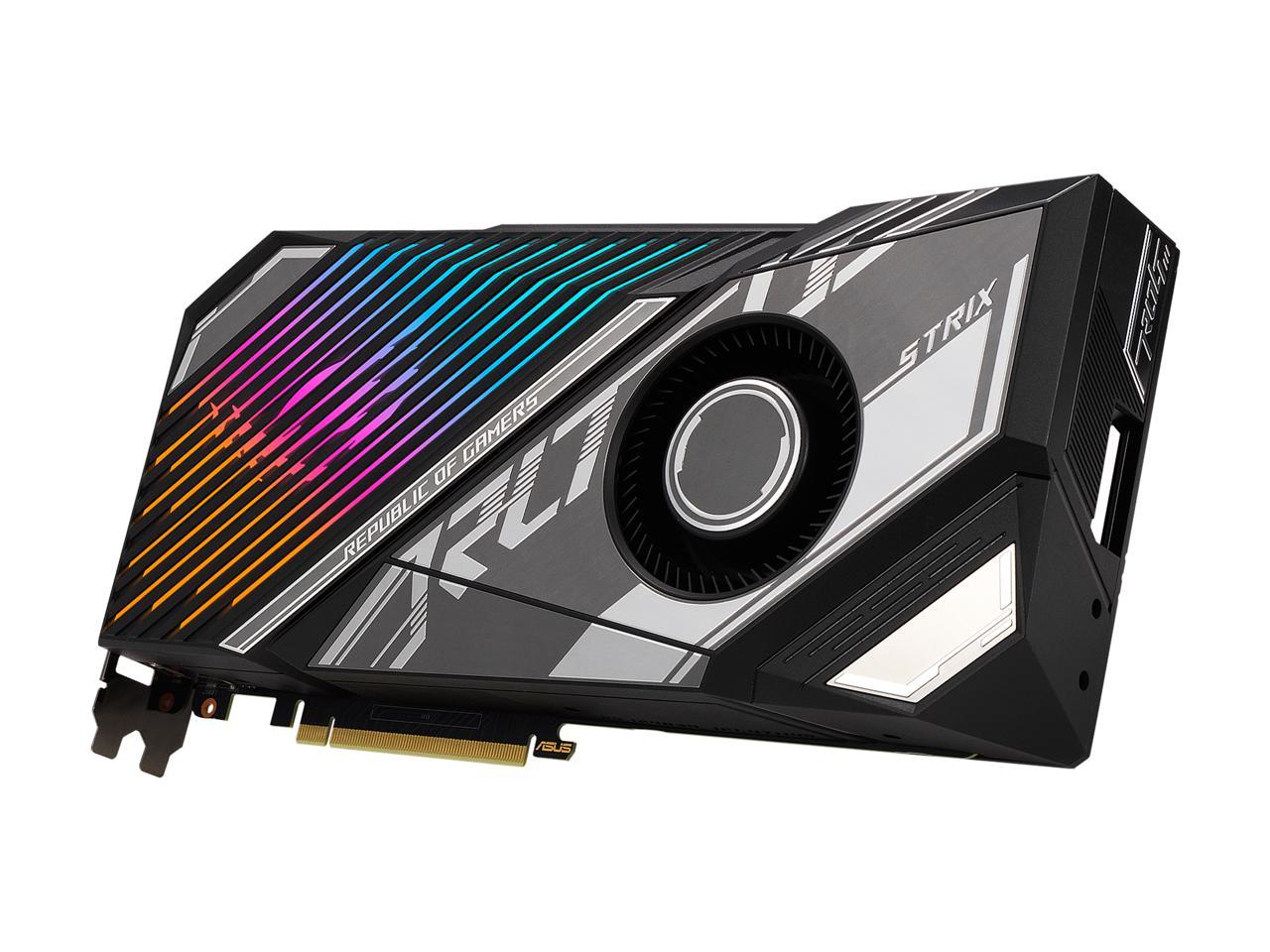 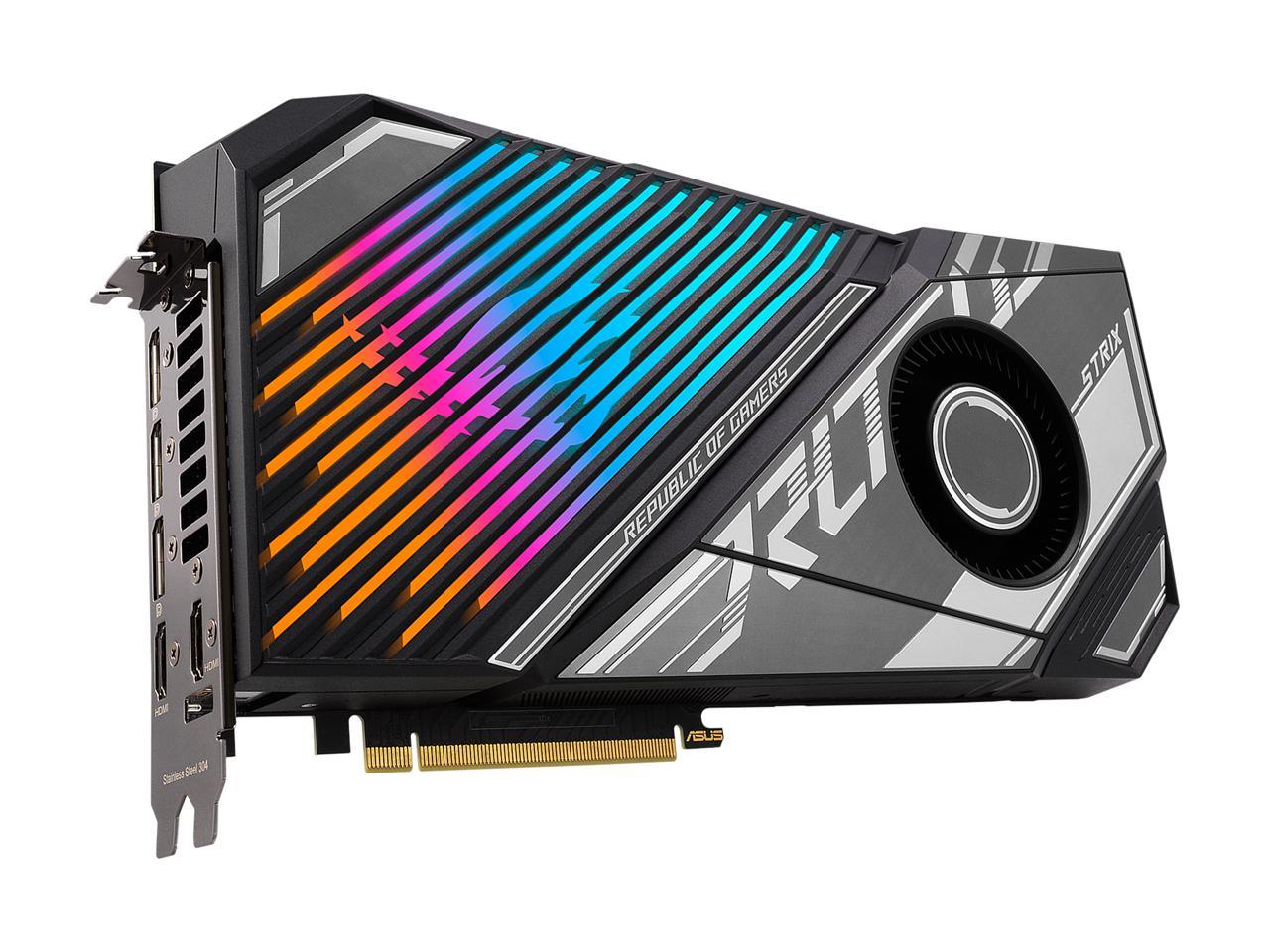 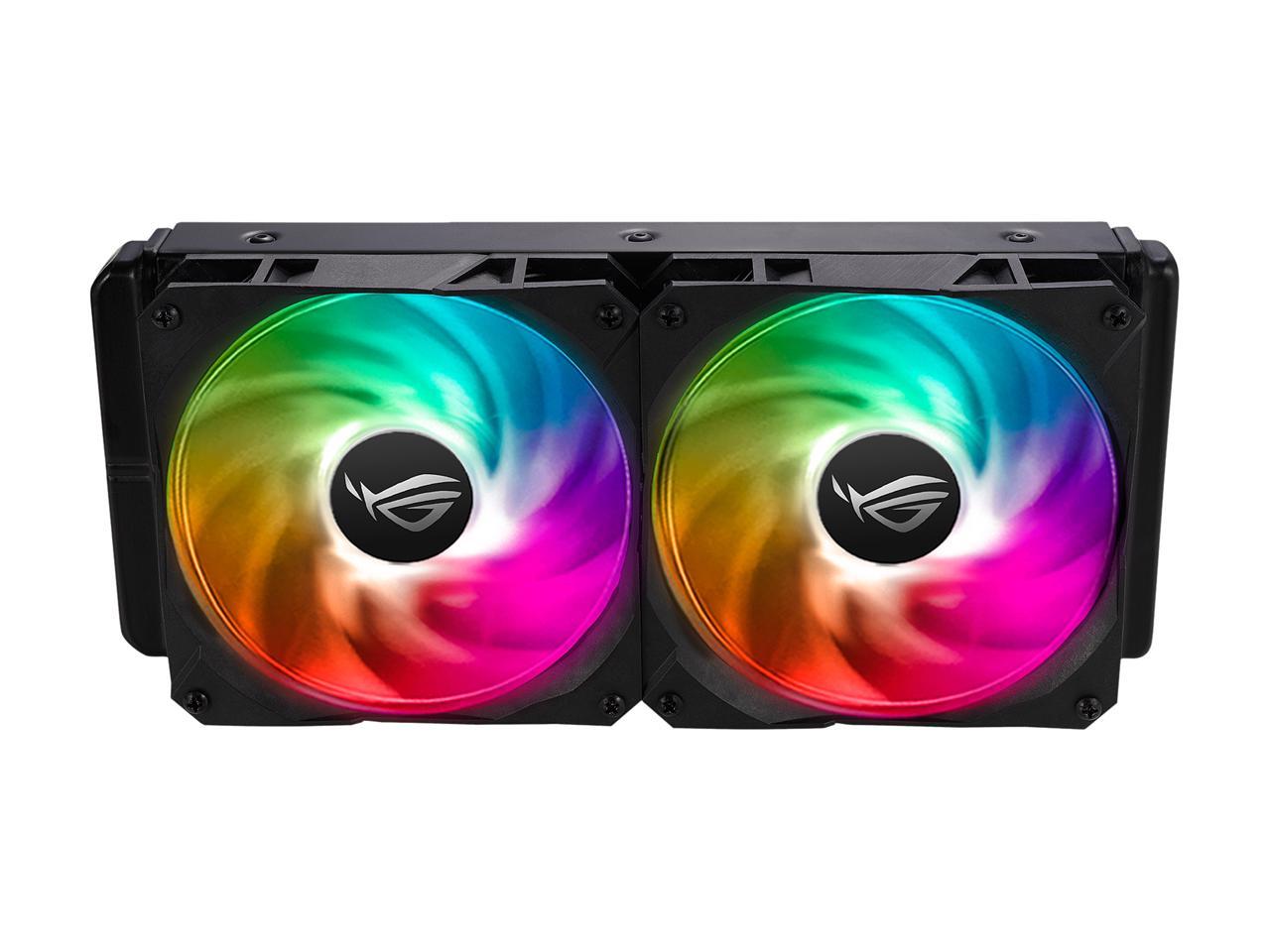 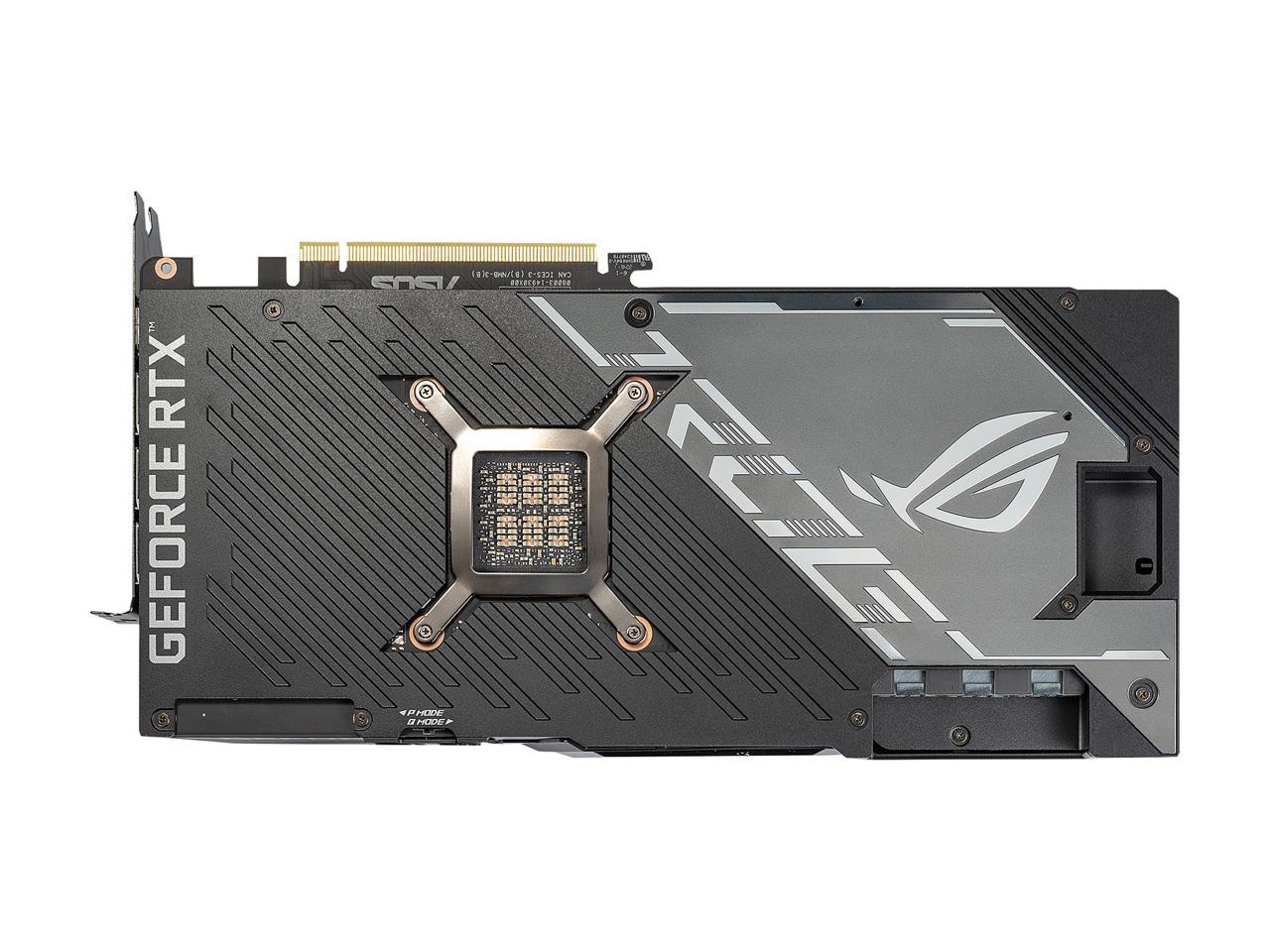 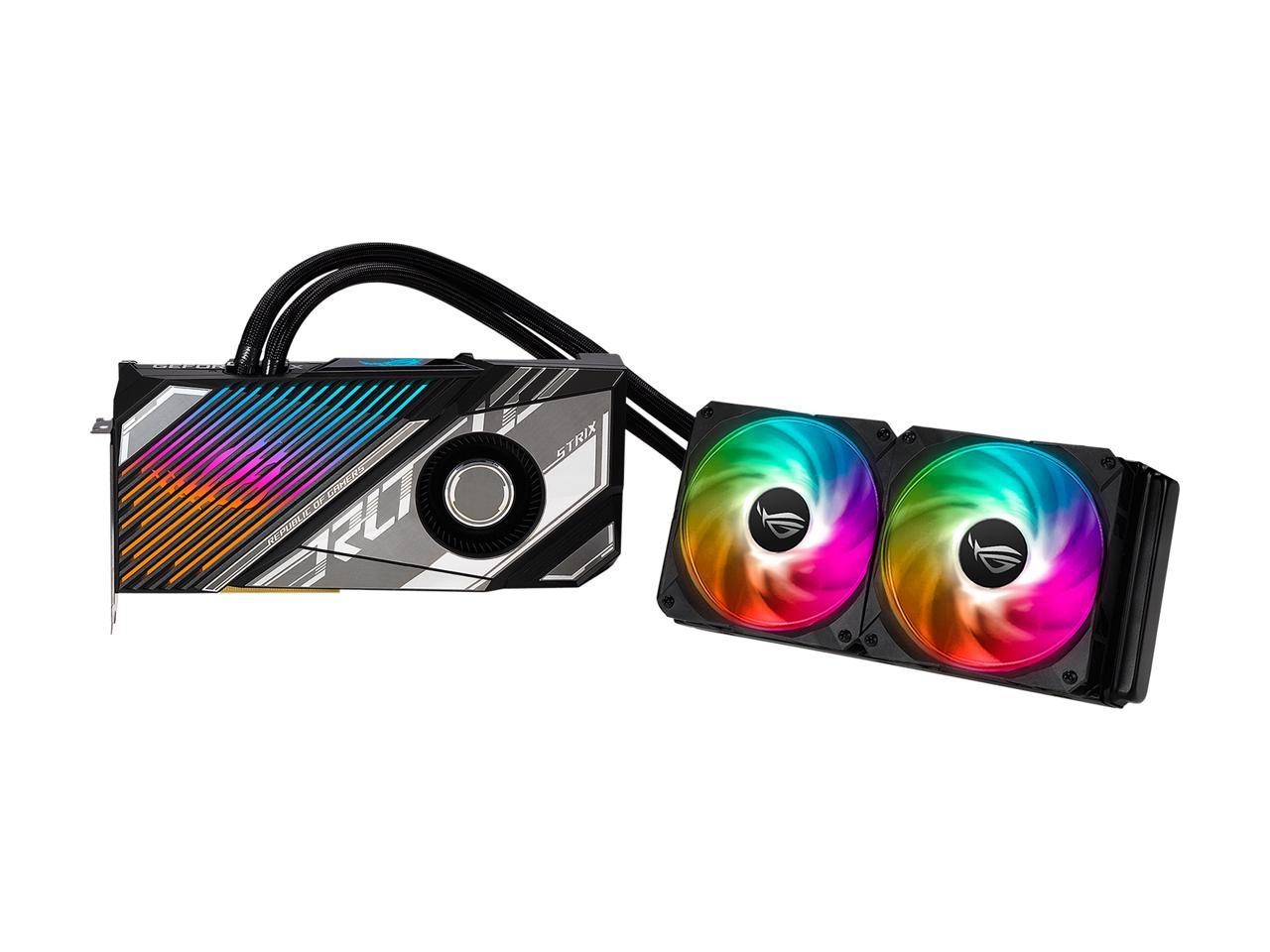 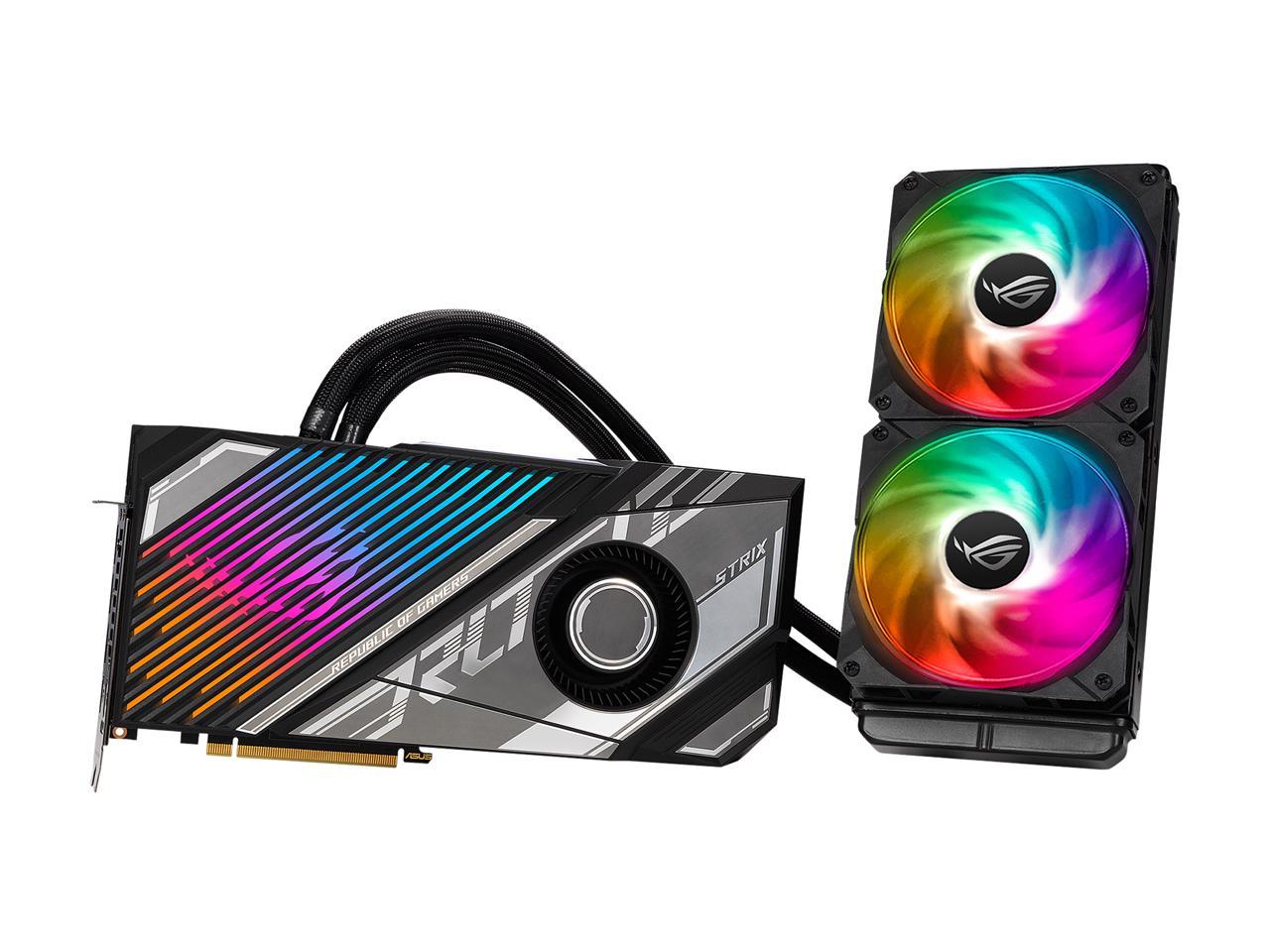 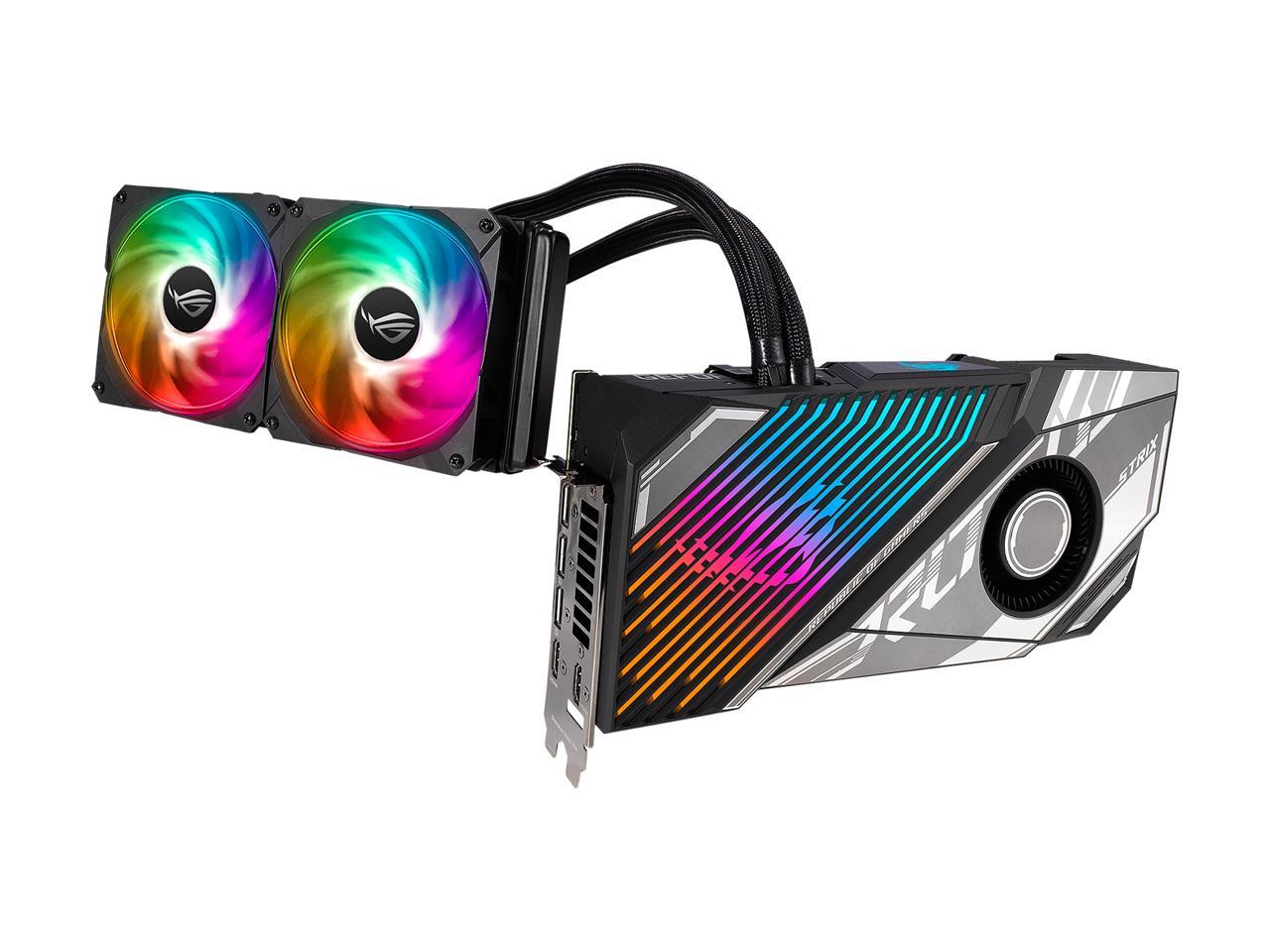 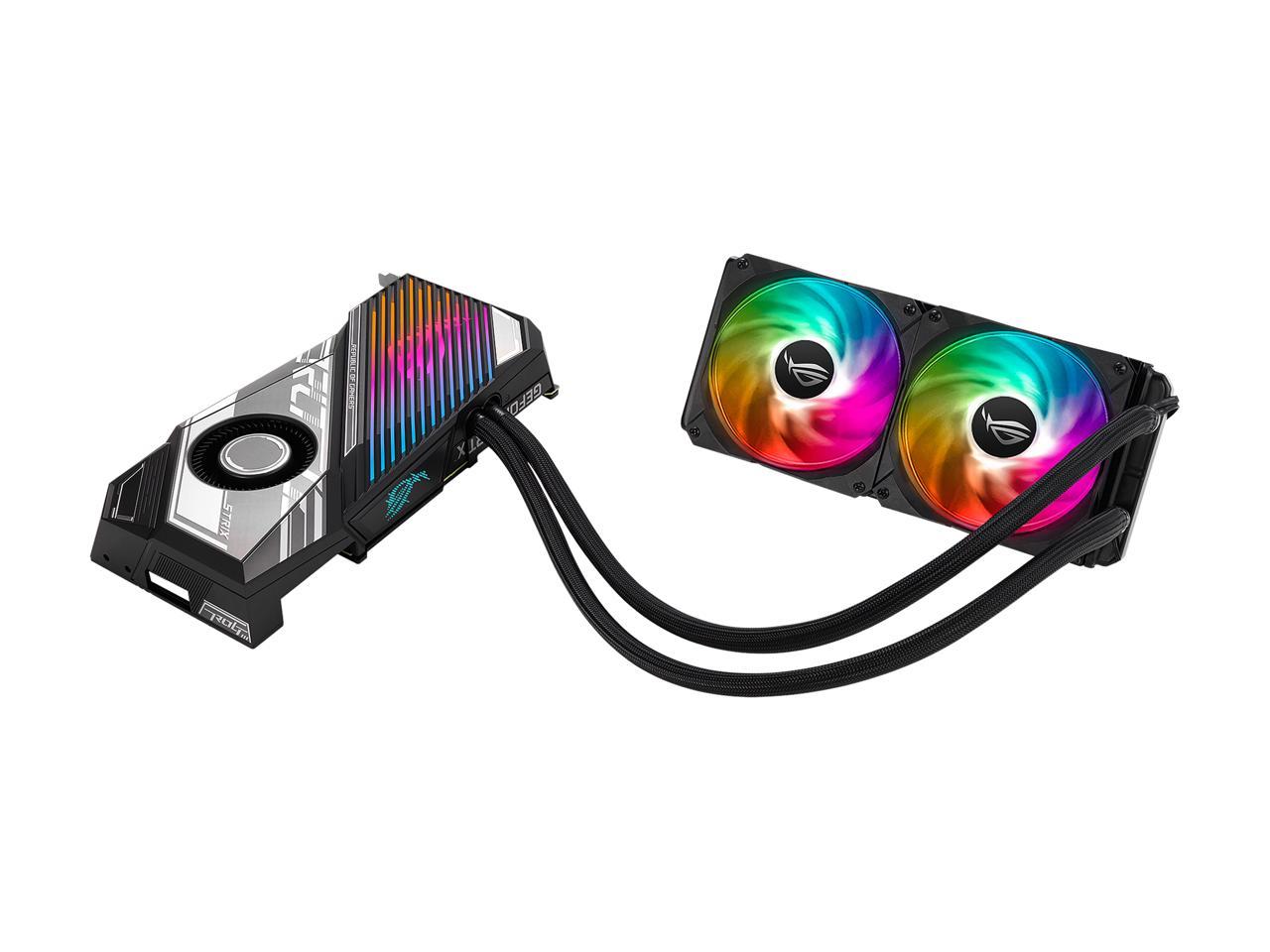 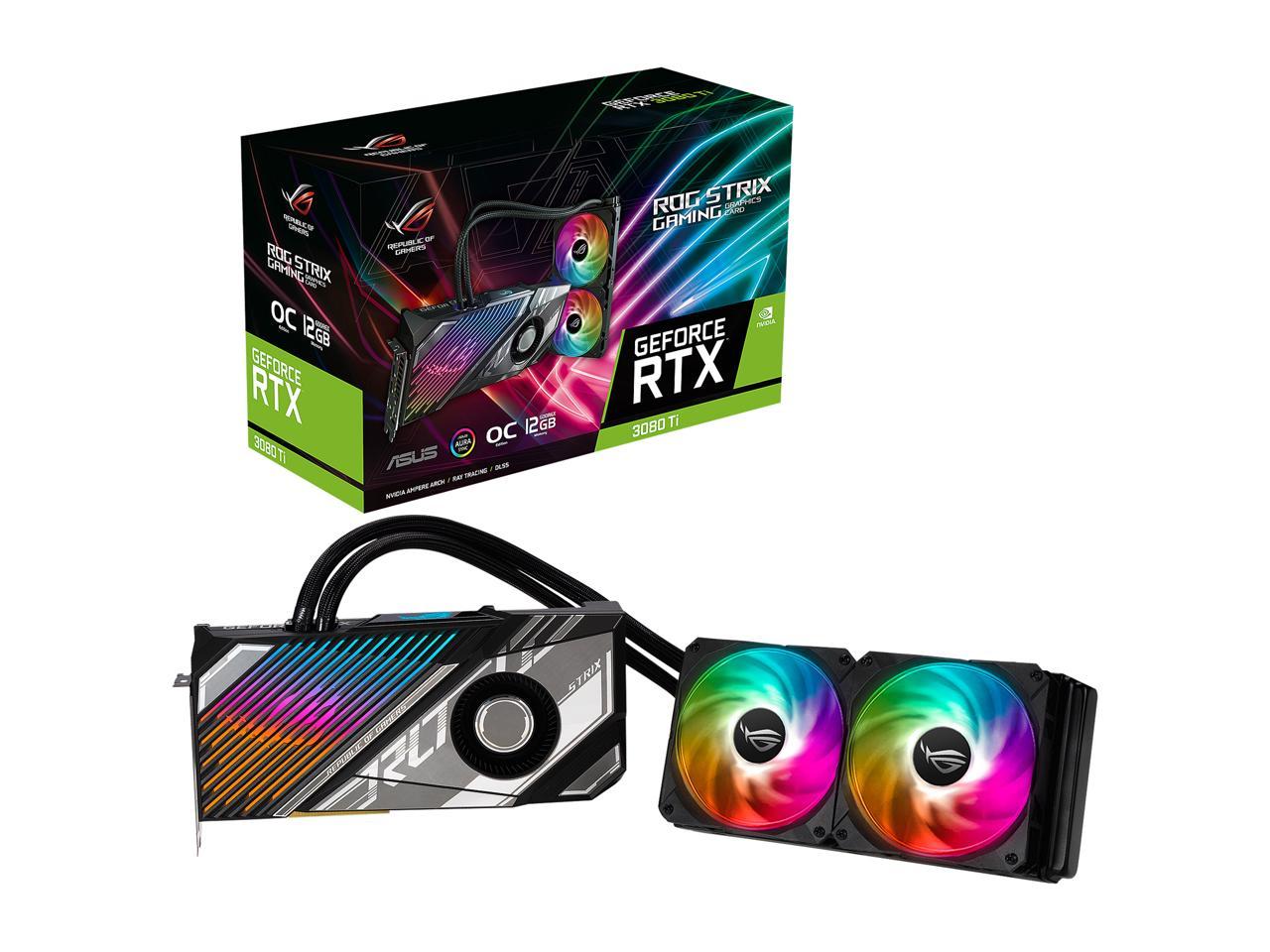 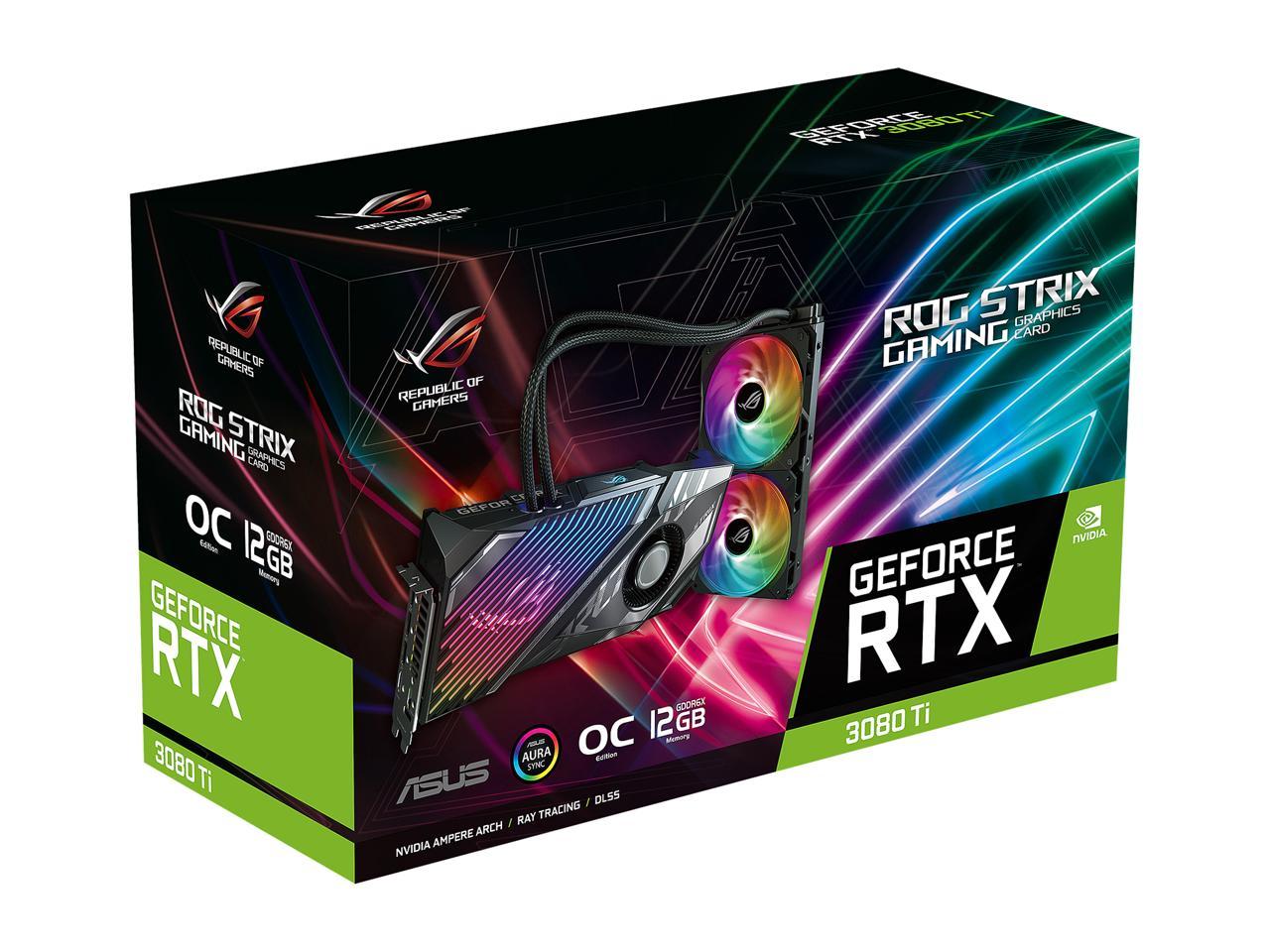 The mind-blowing performance of the NVIDIA Ampere architecture just got cooler. The ROG Strix LC GeForce RTX 3080 Ti channels the power of liquid cooling to unlock the GPU’s full potential and then some, delivering ultra-quiet thermal performance that blows air-cooled designs out of the water. For performance connoisseurs looking to build a supremely powerful rig, ROG Strix LC is here.

A custom-designed cold plate extends over the GPU die and the onboard GDDR6X memory, bringing the full benefits of liquid-cooling to the components most responsible for raw performance.

Heat produced by power-delivery components is dispelled by a blower-style fan and a low-profile heatsink under the shroud. The combo exhausts hot air quietly and efficiently.

The 240mm radiator is cooled by two powerful 120mm ARGB fans that are optimized for high CFMs and static pressure.

The LC utilizes 560 mm tubing to enable compatibility with large chassis or builds that feature an AIO CPU cooler. The radiator fan cables are housed in the tubing’s mesh lining and come pre-connected to the card, streamlining setup and the rig’s interior.

Top-shelf capacitors, chokes, and MOSFETs are selected to effortlessly deliver hundreds of watts at a millisecond’s notice. The Super Alloy Power II parts are soldered to the PCB using our advanced Auto-Extreme automated manufacturing process. Smooth joints on the rear of the PCB and the elimination of human errors ensures each graphics card meets our rigorous specifications.

The rear of the card sports two PWM FanConnect headers that provide additional DIY flexibility. Chassis fans can be directly attached to the card and tuned with a curve that is based on CPU and GPU temperatures, providing extra intake or exhaust for demanding 3D tasks.

The underside of the card reveals further improvements. The rear is covered in a protective metal backplate that reinforces the PCB, adding structural rigidity to prevent flex and protect components and trace pathways from damage. A GPU bracket provides extra stability to the critical connection between die and heat spreader. Stainless steel is used for the I/O bracket to protect ports and provide a more secure mount. And a conveniently placed Dual BIOS switch allows customization of the card’s default performance profile without software.

To fulfill the power demands of the GeForce RTX 3080 Ti, three 8-pin power connectors are present, along with an onboard circuit that monitors PSU rail voltage. The circuit is fast enough to catch any transients that result in the rail voltage dropping too low. If that happens, a red LED will light up to indicate a power supply issue.

The ROG Strix LC flaunts its power with addressable RGB lighting that shines through striations in the shroud, an illuminated ROG logo and two ARGB radiator fans. Customized colors and lighting effects can be tweaked via Armoury Crate.

The ASUS GPU Tweak II utility takes graphics card tuning to the next level. It allows you to tweak critical parameters including GPU core clocks, memory frequency, and voltage settings, with the option to monitor everything in real-time through a customizable on-screen display. Advanced fan control is also included along with many more features to help you get the most out of your graphics card.

We've partnered with wtfast to help you to play free from lag, latency issues, and lost packets. With a 6-month subscription to the wtfast Gamers Private Network, you'll enjoy lower ping for a smoother, more fluid online gaming experience. Buy an ASUS graphics card - and don't be left waiting!

XSplit offers a premium streaming experience with in-game annotations and other advanced features. Enjoy a free license with the purchase of select ASUS graphics cards. See you online!

QuantumCloud is a safe and easy-to-use application that lets you effortlessly earn extra money by sharing your graphics card’s computing power. Earnings are accessible through your PayPal or WeChat account, and QuantumCloud also supports multiple exchange methods, including Steam. In addition, QuantumCloud doesn’t collect any personal data, so your privacy stays protected. Get started right away with just one click!

Learn more about the ASUS ROG-STRIX-LC-RTX3080TI-O12G-GAMING

Pros: Setup was easy. The fans are prewired to the card and powered by the card, which took a minute to figure out but was a nice surprise. Its also nice and quiet.

Cons: Large but not unreasonably so (it is about the same size as the Radeon 5700 XT that I replaced with it). The tubes and radiator do get noticeably warm which I guess is good since it means its efficiently moving heat away from the card. The tubes are quite lengthy and a little difficult to manage but I imagine they'd be great in a larger case than mine.

Overall Review: The card is very quiet but definitely gets warm. I currently have the radiator mounted to the top of my case with the fans setup as exhaust, and the top of my case is very warm to the touch after an hour or two of gaming. From everything I've read about this card this is the best card money can buy, even outperforming 3090s in some benchmarks thanks to out cool it runs and its OC potential. And so far I can't disagree. Really awesome card!

Cons: Harder to install than a regular non water-cooled card because you need the right case setup You need to provide the screws to mount the radiator to your case

Overall Review: This is a really well built graphics card. The whole backplate is thick and has a premium look and feel. The radiator is built well, along with the thick tubing. The fans on the radiator are nice and ROG branded. The graphical quality is amazing. DLSS looks so good on the ampere generation.

Cons: No screws for mounting the radiator. Plenty of other useless junk provided including stickers that no one will use. At the already inflated cost winning the shuffle in order to purchase, youd expect mounting screws plus spares for your $$$$

Overall Review: I cant really do much without finding appropriate screws for mounting the radiator, will have to spend a bit more on an already expensive card. Either poor QC on Asus part or they think everyone will have at least 8 correct screws on hand and ready.

Pros: - GPU looks top notch quality - Very fast - Not as much heat from it as expected

Cons: - No screws provided to mount the radiator (you need 8) - Installation manual is a joke. Very bare minimum. Just stay, install GPU and install software. No mention of radiator anywhere

Overall Review: I won this GPU from Newegg Shuffle. I did't specifically want this card because not looking to spend over $2,000 on a new 3080 GPU upgrade. I was hoping to win regular RTX 3080 GPU but I won this so I decided to jump on this deal. Other than price, I am very happy with this card. I owned Asus ROG Strix RTX 2070 Super to this card so this is my second Asus ROG Strix card. Very happy with my 2070 Super card as well. No issue with that card so I am not worry about quality of this 3080 Ti card. I am casual gamer and I play shooters like COD Warzone and Valorant mostly. In COD, I had to turn turn down some graphics settings to Normal to keep frame rates high above 140. Now, I can turn up all graphics settings to high and this card is not even breaking sweat. Overall, very good quality and high performance card. The only thig I don't like is how overpriced this card is.

Cons: Expensive, definitely not something to purchase if budget is a concern.

Overall Review: great card and aio allows it to hang with 3090 in most areas. If you don't need the extra vram and want a fast and top performing card, then this is it.

Pros: -it seems like at this point i have never had the card temperature throttle on me. -its a tank. -asus software isnt too bad. -seems to really be built solid (aka tank) -great for my ego! (i think) (i mean i know) (yea)

Cons: I would never have even thought about buying this card if i have not have gotten it from the shuffle. this is not a device for literally 98% of people in the computer market.. including myself.. speaking of shuffle.. (this part has been removed to stay within guidelines... hopefully..) *didn't even get a single egg out of the whole deal. even in these trying times..

Overall Review: my first thought was resale perhaps make a few bucks? cant beat em join em? unfortunately.. my imagination got the best of me and its currently running in my system for the foreseen future or until my bank account decides its time to quit fooling around. strangely enough and probably the bane to many gamers out there, i very rarely ever play any video games whatsoever. having a top notch system to (just see what it can do) its mostly just in the hobby sphere for myself. i could get away with all the tasks i usually am up too on a cell phone. I would guess my circumstance might not be as rare as i think, who knows.. honestly i wish i had the patience to sit down and play some games again like when i was a teenager without feeling guilty about wasting time on something. Tip: don't be like me, its not fun. ill include some pics of my other junk. plz dont be salty, the only one salty is me when i look at my bank statements..