Purchases from these Sellers are generally covered under our Newegg Marketplace Guarantee.
Sold and shipped by: ruihao's Marketplace
Ships from China.
Price Alert
Add To List 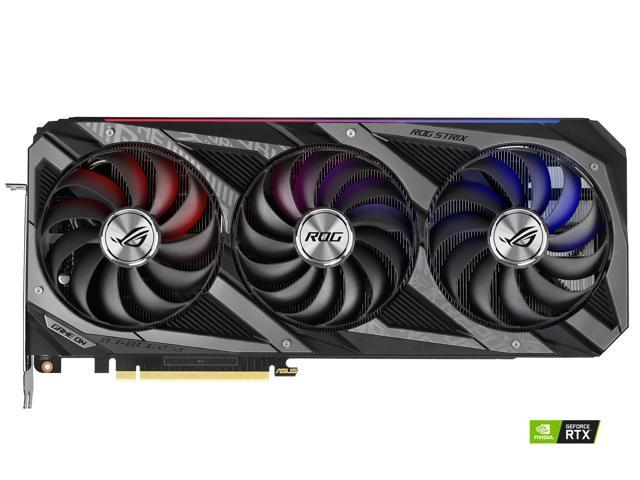 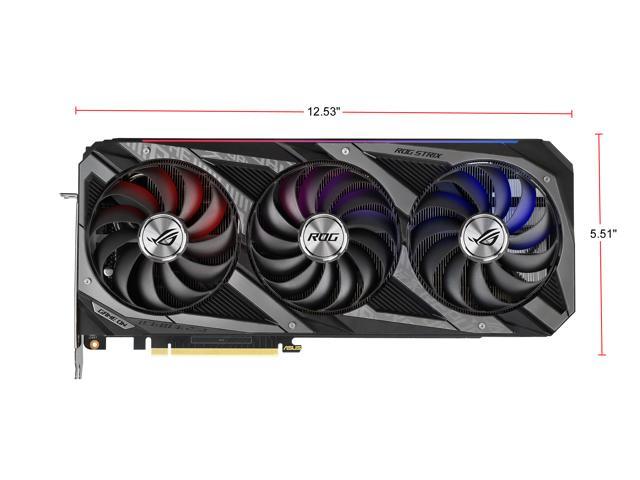 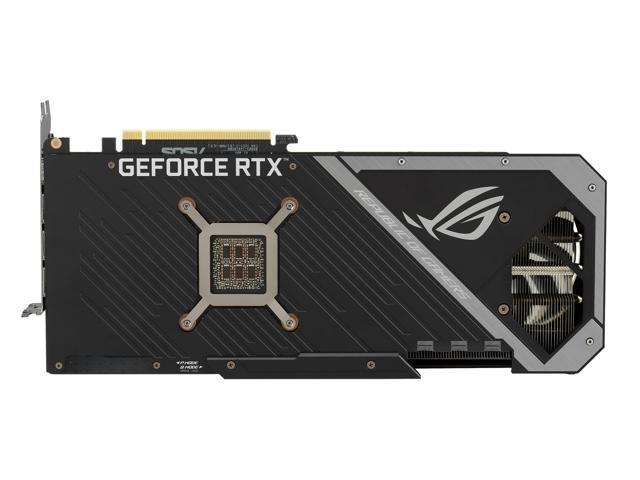 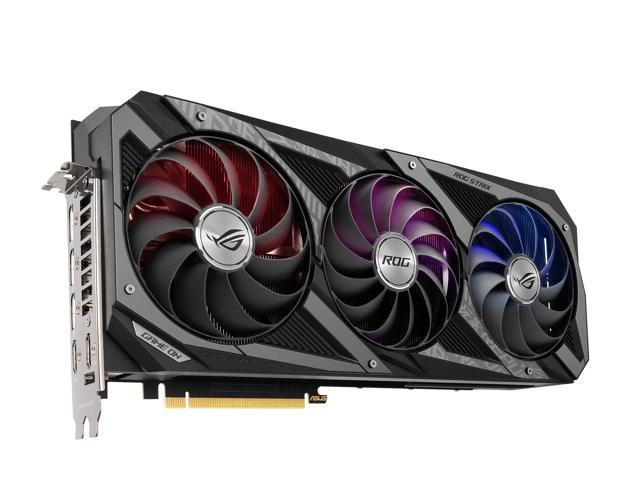 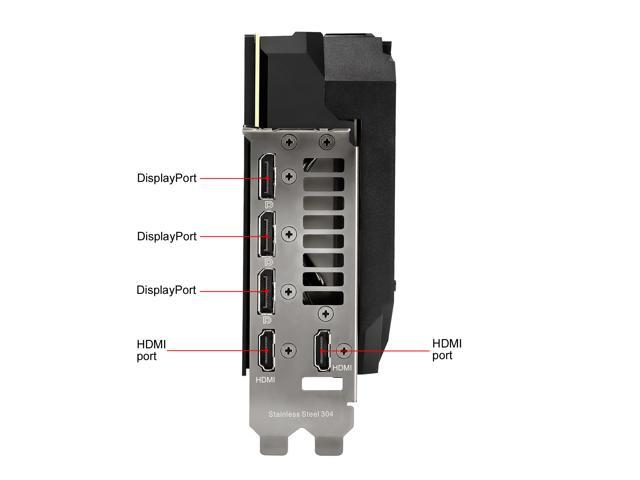 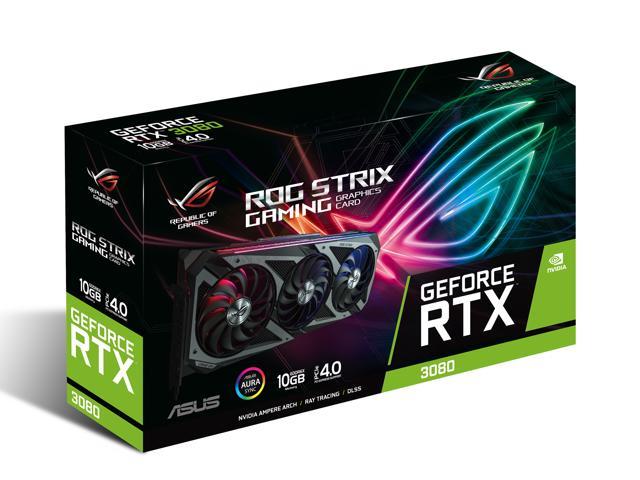 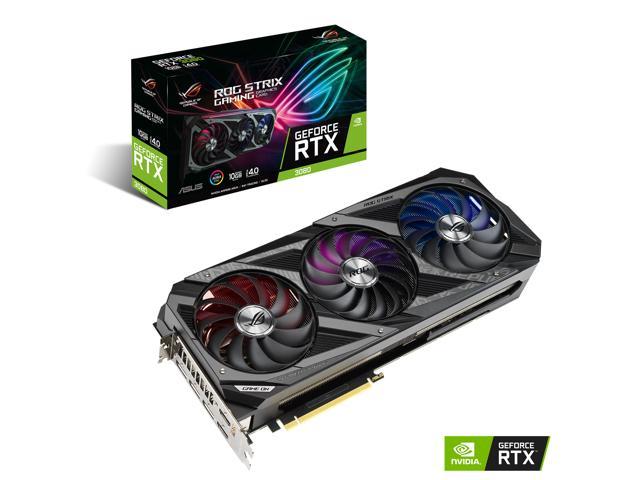 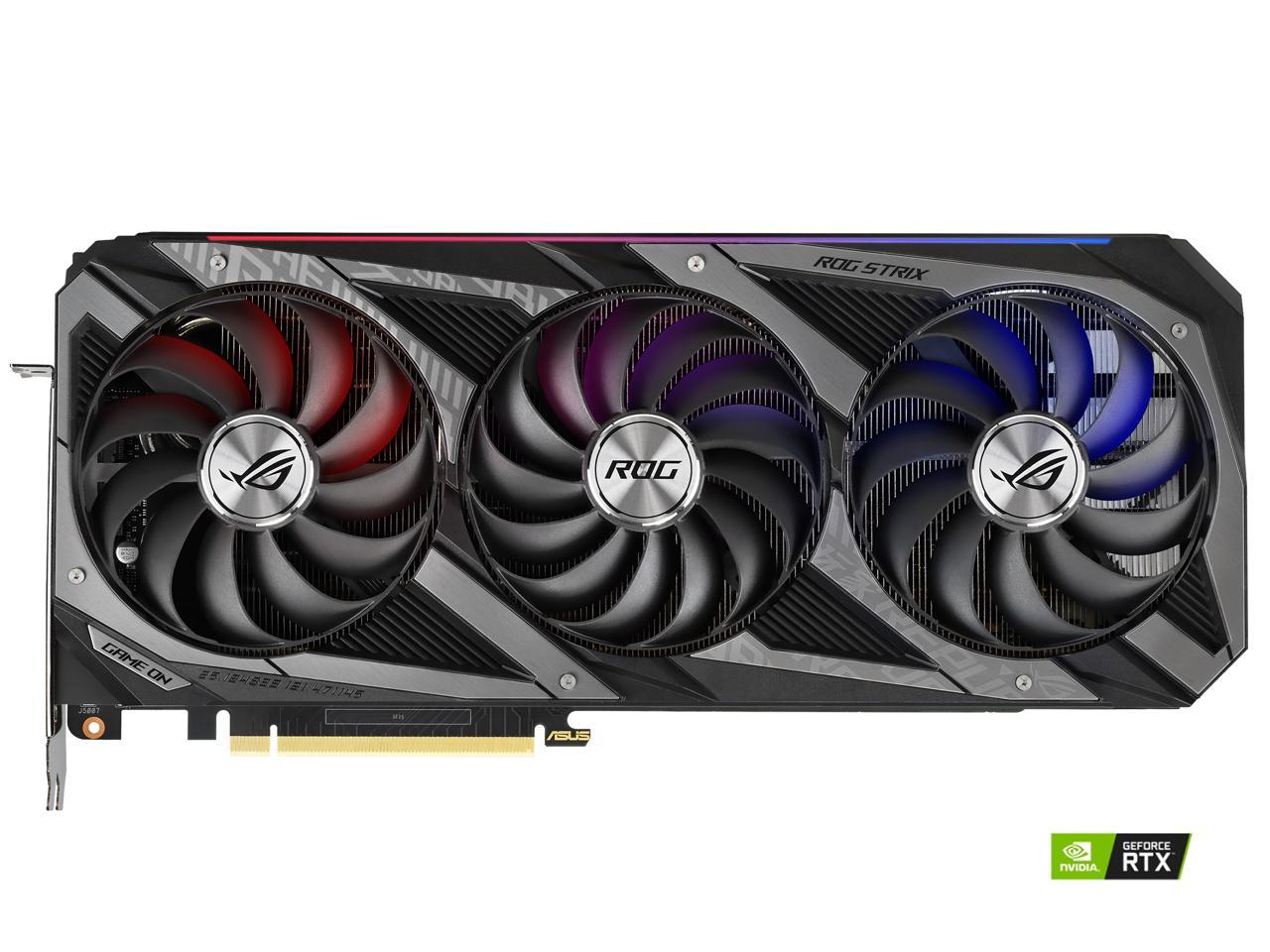 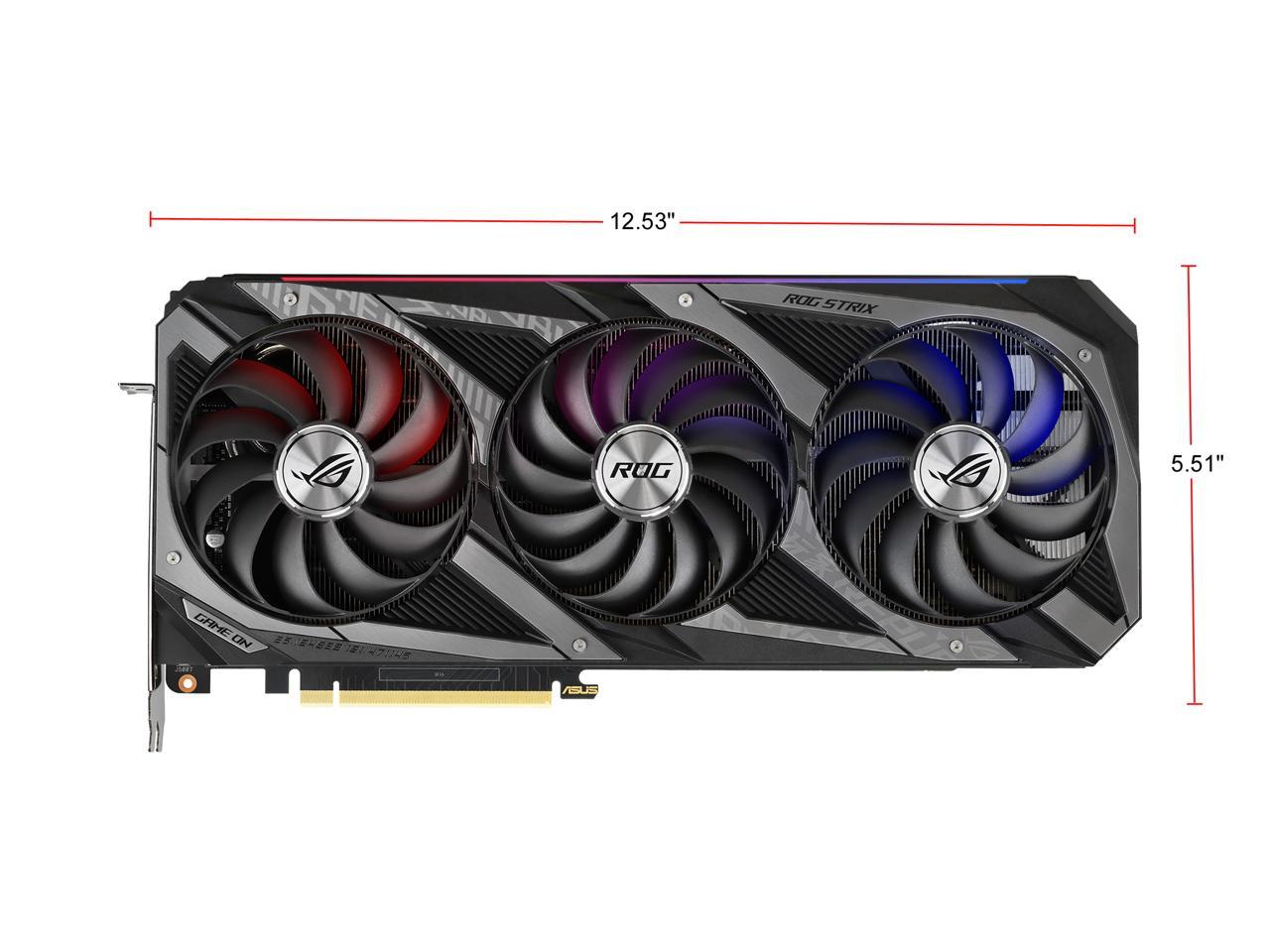 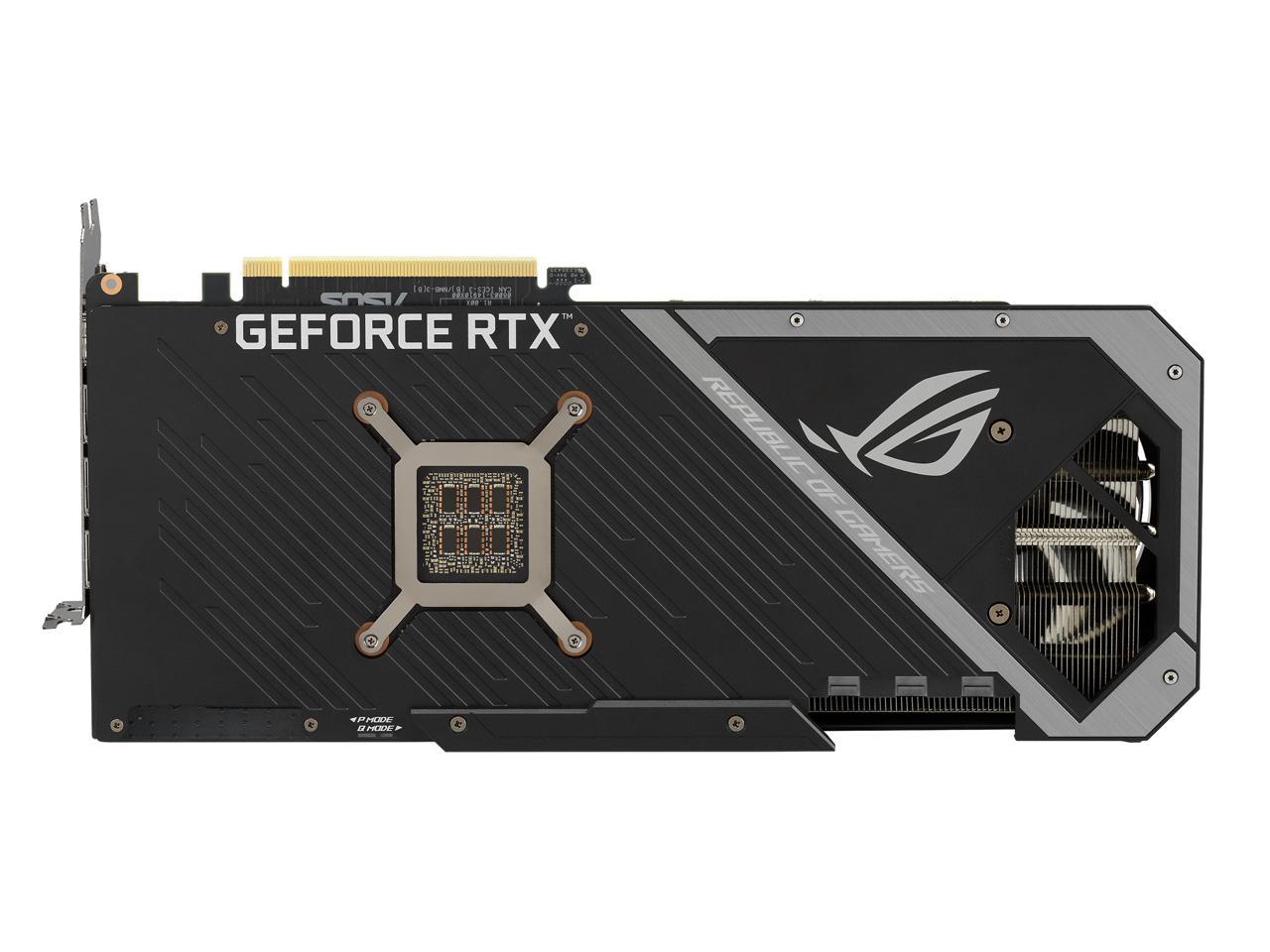 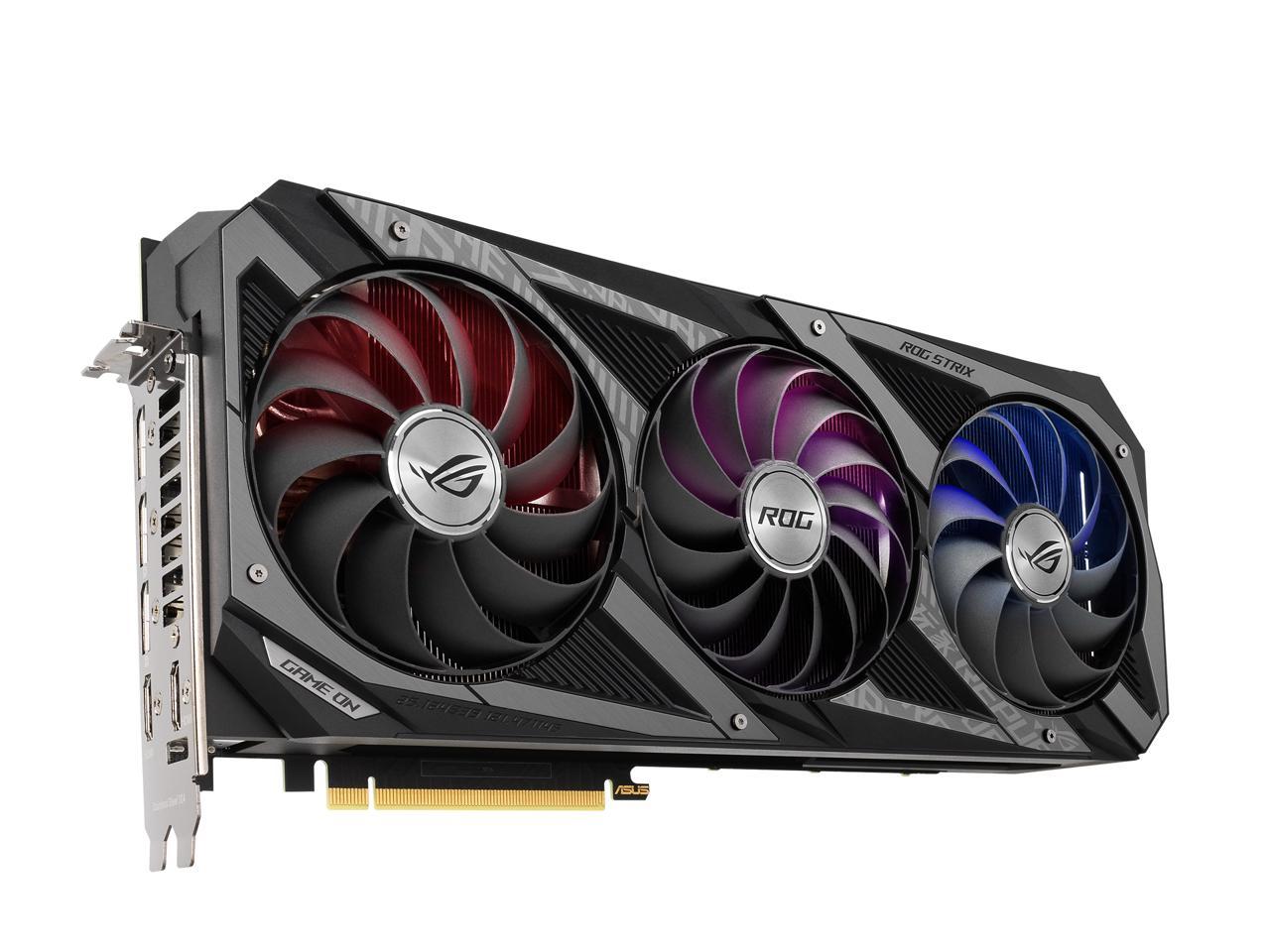 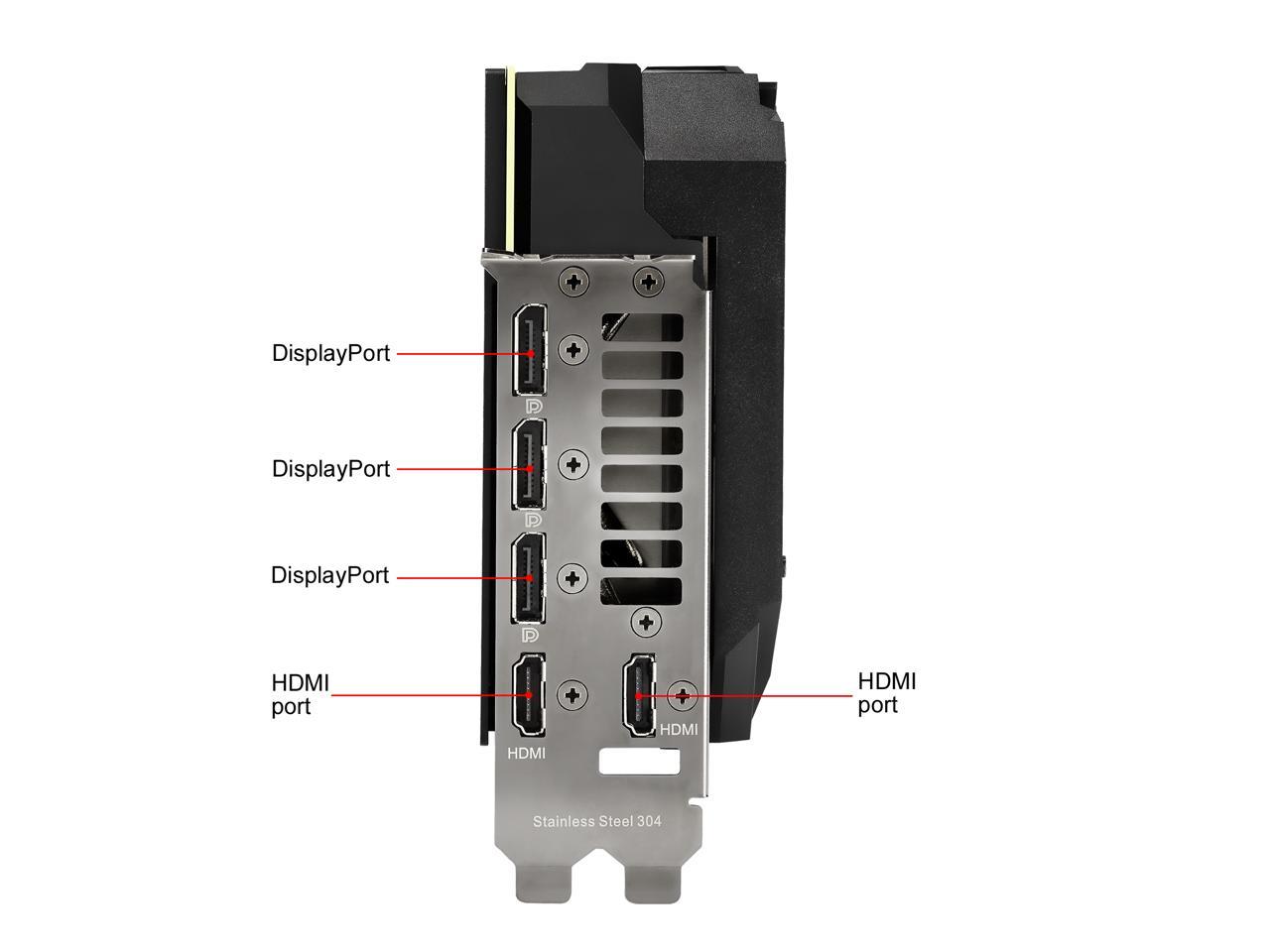 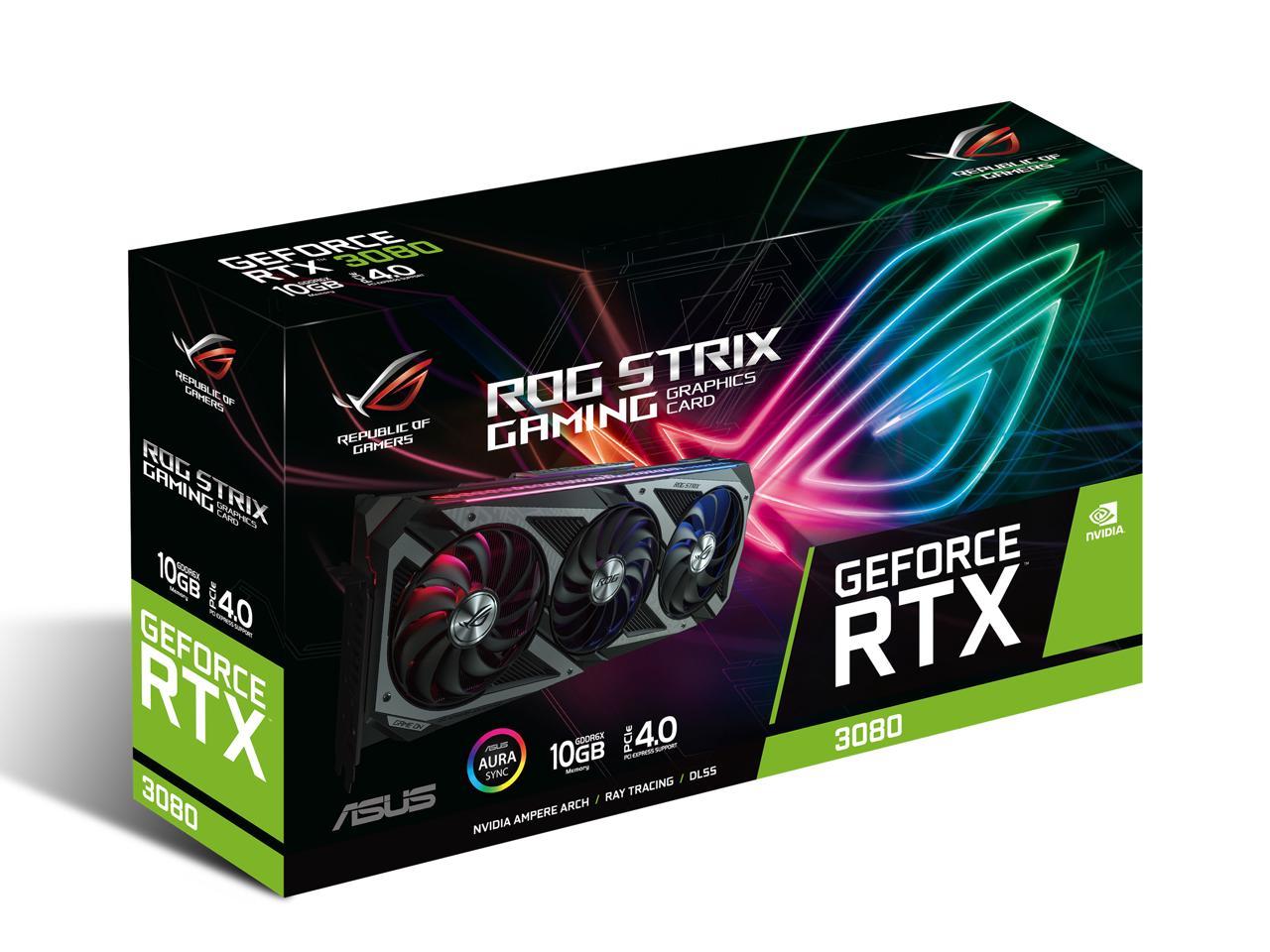 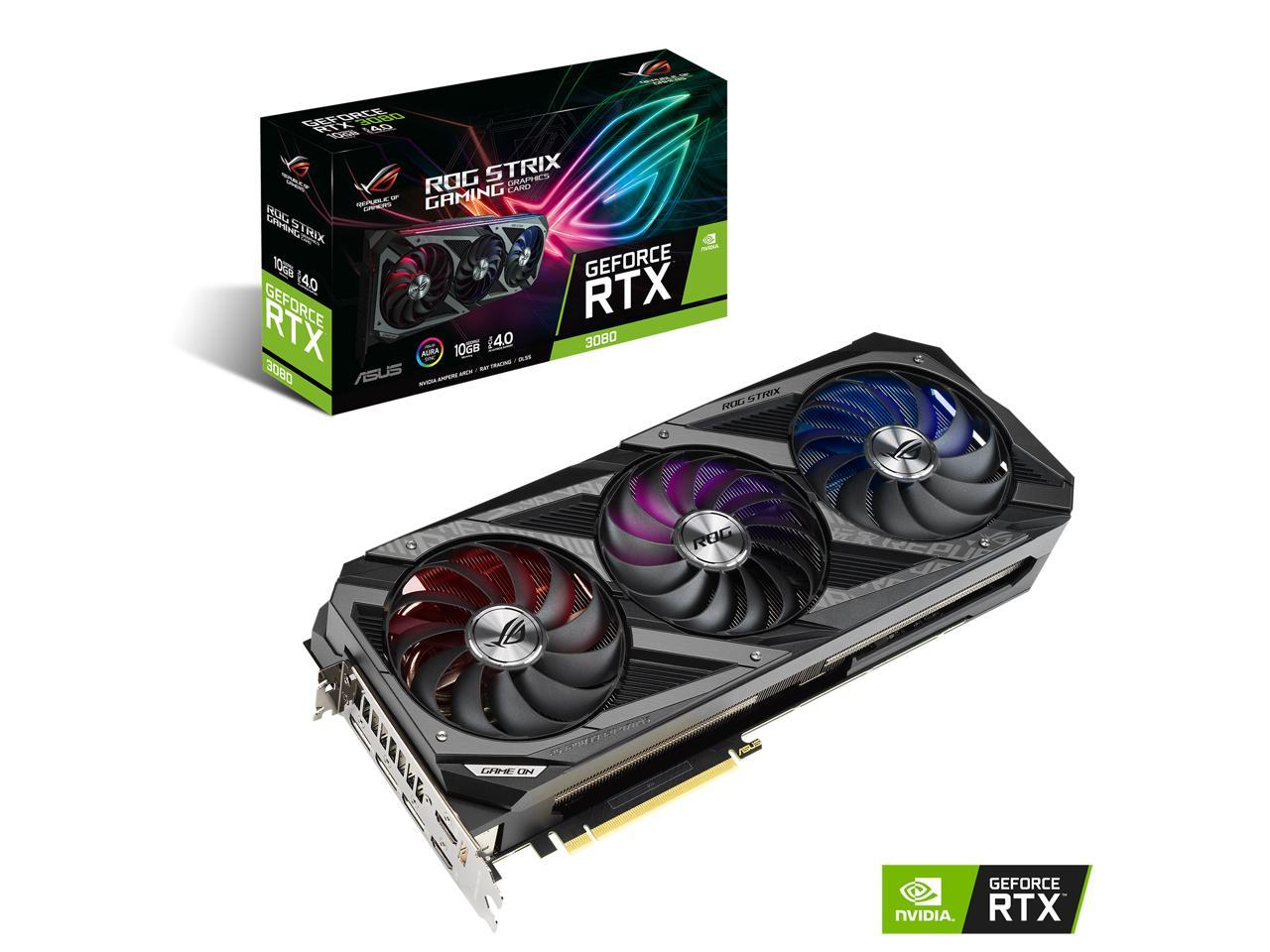 Learn more about the ASUS ROG-STRIX-RTX3080-O10G-GAMING

Pros: Good performance, out of box the thing is solid and didn't really have any card sag. The card performed better than advertised (Clock speeds). Its hefty and thermals were impressive. The card alone is a 4-5 for sure.

Cons: Card died about 40-50 days after usage, just shut off on its own and what I assume is caused by a power short or something as there was a faint electronic smell after the fact. Tested everything and ruled out that the only component causing a failure to power was the GPU. Sent the card back for RMA and was surprised by the turn around given supply constraints. But, here's the bad news. Received a refurbished unit that was packed in two brown boxes with the card sitting in the second box with no padding. ASUS would immediately deny my RMA claim if I had sent it this way. Immediately started lightly shaking the card (in hand not the box), and heard loose items shaking. So the unit arrived damaged, with missing screws, and the fan shroud held in by one screw. The IO shield/plate in the back was also bent. I figured, with the time constraints and already spending two weeks on this, I figured why not just repair it and test to see if it is working. I called in to tell them what happened and they couldn't let me know if the sticker above the screw would void my warranty, after some digging ASUS explicitly states the sticker cannot void the warranty for the US. No concessions were made and I was more than willing to ship it back, but I wanted ASUS to step up to their mistake by asking for an expedited RMA. I was told that RMA's cannot be expedited in any way, despite me just asking for my card to have the RMA shipping expedited. Anyway, few minutes later and figuring out how to take the card apart, I found two screws that were for the shroud in the bag and reattached everything. I'm still missing one as the repair center never put the fourth one in, (Certified Unit By the way). The card works and I'm planning on stress testing it but extremely disappointing by the level of service received. To add to things, my support case over the phone was handed off to be via email, which was suppose to have about a 30 minute turn around, but alas, never got back to me. So ASUS, the balls in your court now. Make it right or just pass it on.

Overall Review: I want to recommend this card as a product, the construction of it feels solid, I was extremely impressed. Clock speeds on my original product was north of the advertised speeds, won the silicon lottery to a point as well. But the support service is just abysmal. This is my first time in all the years of using ASUS products that this has happened, and quite frankly is turning me away.

Pros: Really good GPU, you can run pretty much anything you want, I game in 1440p and can get 144fps at max settings in most games.

Cons: There is a flaw with the fans, after 4 months of use the 3rd fan (Farthest fan from the gpu ports) started to make an horrible rattling noise around 75% fan speed, i've looked it up on nvidia forums / reddit and others and it seems like many people have this issue with the 3080 / 3090 strix. For some people and myself it seems like the gpu sag has something to do with this, when pushing back up the gpu the rattling stoped so I bought something to hold it up and prevent sag and it seems fine since then. If you're a silence freak you will definetly notice the fans at high rpm and mine has some coil whine

Overall Review: Overall a really good gpu but at this price point having a fan issue is hard to swallow. I can't go through an rma because I have to work from home and can't be left without a pc / gpu for a few weeks and with the stock being so low for so long I can't take the risk. Cheers

Manufacturer Response:
Dear Samuel, It is unfortunate that you're having fan issues after 4 months of use started making rattling noises. If there issues with your fans, you can have it sent in for service. We stand by our products and back them with a 3-year warranty. If you need help with getting that processed, feel free to contact me at cl-justin@asus.com and I will help you to the best of my abilities. I'm here to assist our customers with our products and dedicated to bringing a resolution to all issues that they may come across. Your case for reference is #N2103010426 Thanks for choosing ASUS Regards, Justin ASUS Customer Loyalty – US Support
Ruto684
Ownership: 1 week to 1 month
Verified Owner
Its a strix8/7/2021 1:39:15 PM

Pros: Its a strix one of the best gpu on the market and I have owned a couple with no problem at all. Never had an issue with them or had to send one back so I guess Im lucky compared to some of the reviews here. Ive owned EVGA, Asus Tuff and MSI but the strix give me the best stable Preformance, high FPS and no over heating problems.

Overall Review: Overall I would recommend this GOU to any serious gamer and it you can get one for MSRP then Score.

Cons: -Coil whine stock, but undervolting it resolved the issue - High heat output when pushing the card over its stock power limit - Its big !!! Needed to mod the case to get it in

Overall Review: Undervolting + OC is the way to go with all these RTX 3080. Port Royal score of 11 800 with my undervolt + 500 mem oc while staying cool and perfectly quiet. The Strix version gives you the possiblity of pushing the hardware further with watercooling but not so much on air because of the high heat output.

Pros: -Excellent thermals -Fan noise is well below what I expected -Beautifully designed

Cons: -Size of the card. Check your case dimensions!

Overall Review: This card is an absolute monster out of the box, but overclocking truly makes it shine. Had to switch from a fan width of 25mm to 15mm in my Meshify C case to fit the card which gave just enough clearance. Card has stayed consistently cool.

Overall Review: Well, there is a reason why it is the most sought-after 3080: it’s built differently. Everything about it looks mature and feels premium and tasteful. Kicks out serious heat when put under real load, but that is what you expect from a 450W card. It fully loves up to its expectations. 2140MHz locked after several hours of gaming, by the way. If you can happen upon it in stock and it’s in your 3080 budget range, do not hesitate.

Pros: -Performance is above any other model of 3080. -Lot of overclock headroom. (can go 2000 mhz+) -Easy to under volt to maximise power efficiency. -Temperatures stay low. Very low for how much power this thing draws. (be aware that the heat is just more efficiently exhausted meaning its your room that is going to get hot. It's the equivalent of a small space heater after a good gaming session) -Quiet, VERY quiet in fact. -No coil whine. No scratches, everything is working as expected for a premium product. -Asus' "GPU tweak II" software is simple and easy to use. It does what I want and doesnt bug like precision X1. (yeah looking at you EVGA). -Card's RGB was detected and could be controlled from Corsair's iCUE software which was not the case with my 1080 ti. Much more convenient than having to download and use Aura creator. -The look is subjective but I find it more appropriate than the previous strix designs. It looks more serious and industrial. The RGBs on the side and trough the fans are the best looking of all the 3000 series models in my opinion. -Still has the exterior fan connections to plug and control fans from your GPU fan curve.

Cons: -Heavy. Heavier than any card made previously but doesn't sag at all. -Big. Bigger than any card made previously. (fits just fine is a Fractal design Define with a radiator in front. ) -The 3 sockets for power delivery are not convenient. PSU came with 2 PCIe cables that each have 2 connectors in parallel on the same cable. So I have 4 connectors but only 3 sockets to fill. (see first picture) It doesn't look right. The only options I have is to leave it like that or to buy custom cables mods or to buy a different single connector cable, so I would have one with 2 connectors and one with 1.

Overall Review: It has an overclock profile out of the box but I decided to create a custom overclock profile that goes above the OEM overclock. What is even more impressive is how quiet the card remains even when the fans are spinning faster. I made a pretty aggressive fan curve and manage to stay below 67 Celsius (OCED) at about 80-90% fan speed. Even at 100% fan speed I can not hear them over the game sounds with my headsets on. Actually, my case fans make more noise than the card.

Cons: Fans keep turning on and off. Currently trying to figure that out. Came a bit scuffed on the metal shroud on the fan side but I won't notice it now that it's in the case .-.

Overall Review: Coming from a GTX 1080 gigabyte g1 gaming, it was well worth the upgrade. Here's to another 4 years.