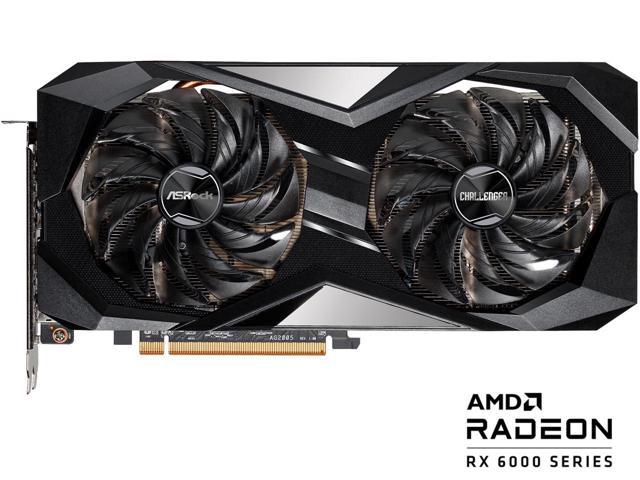 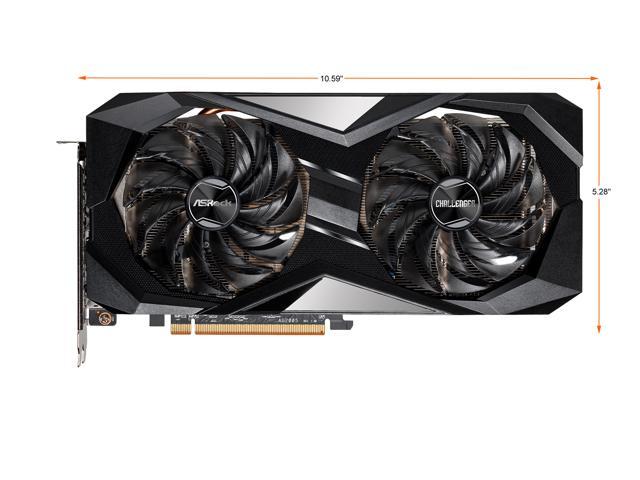 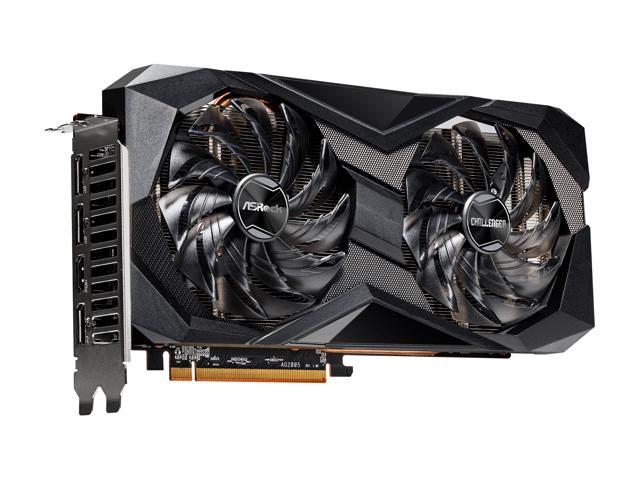 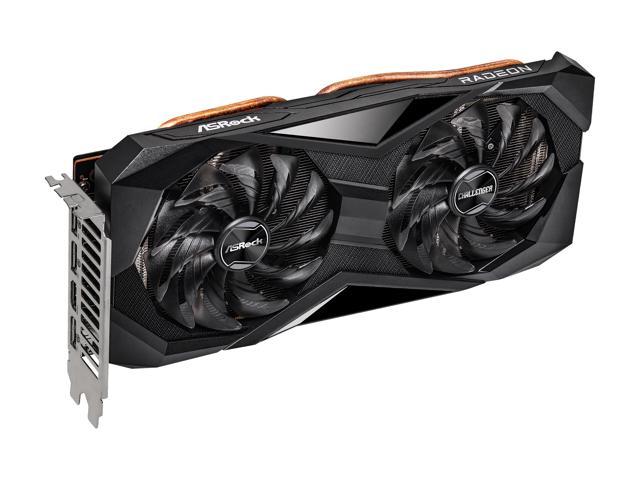 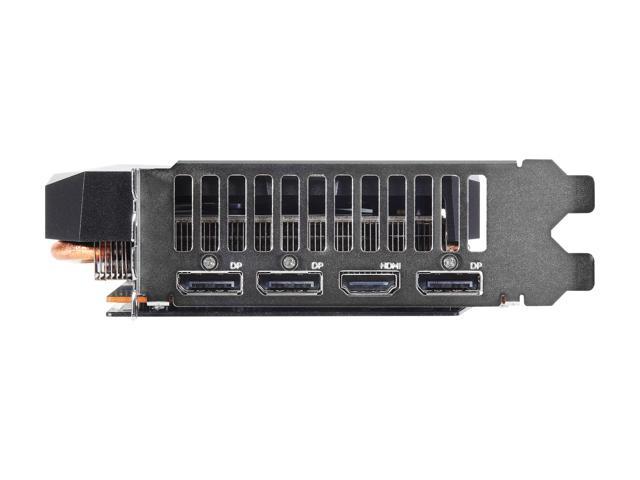 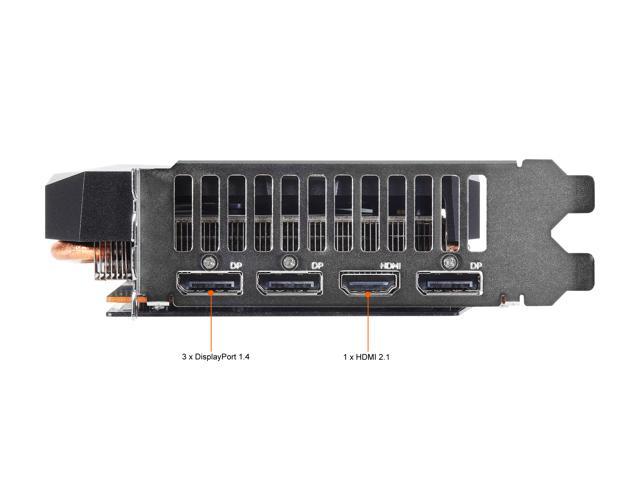 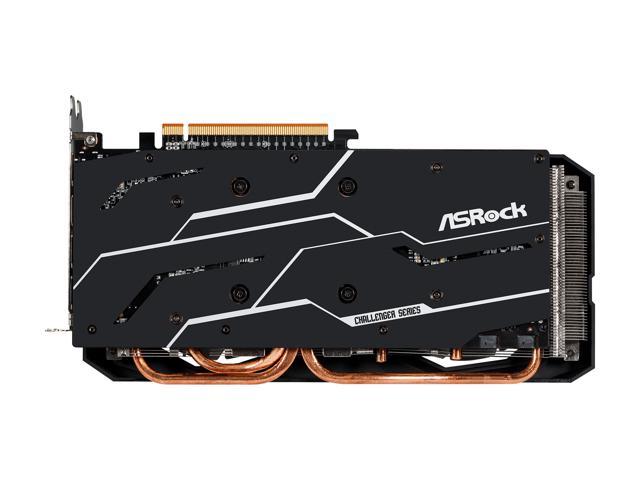 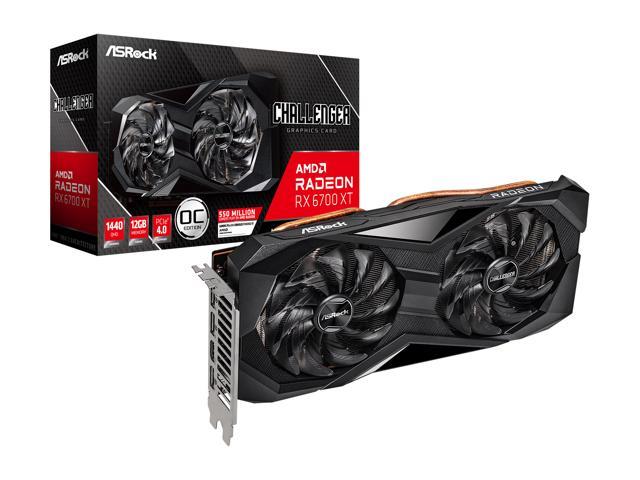 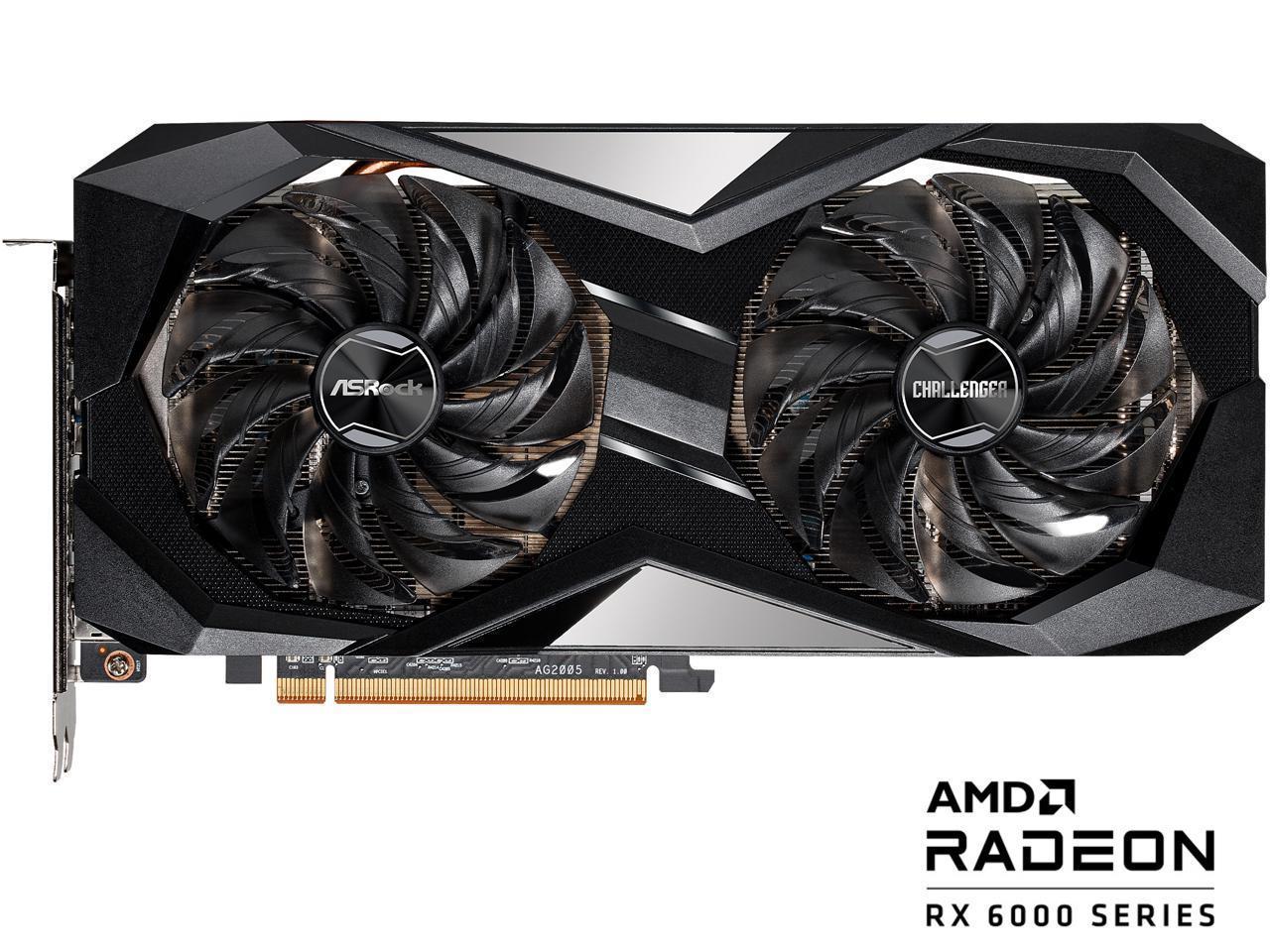 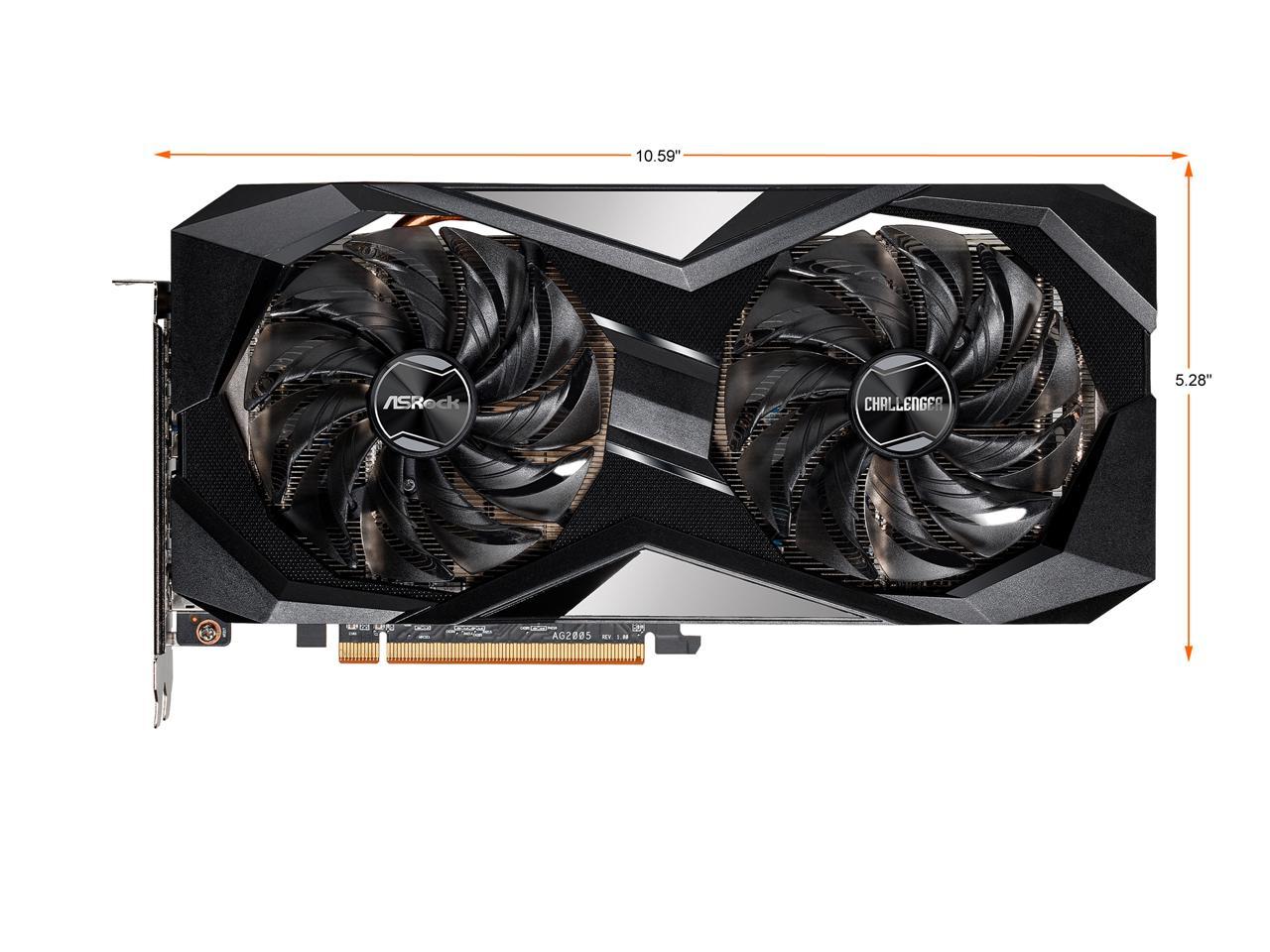 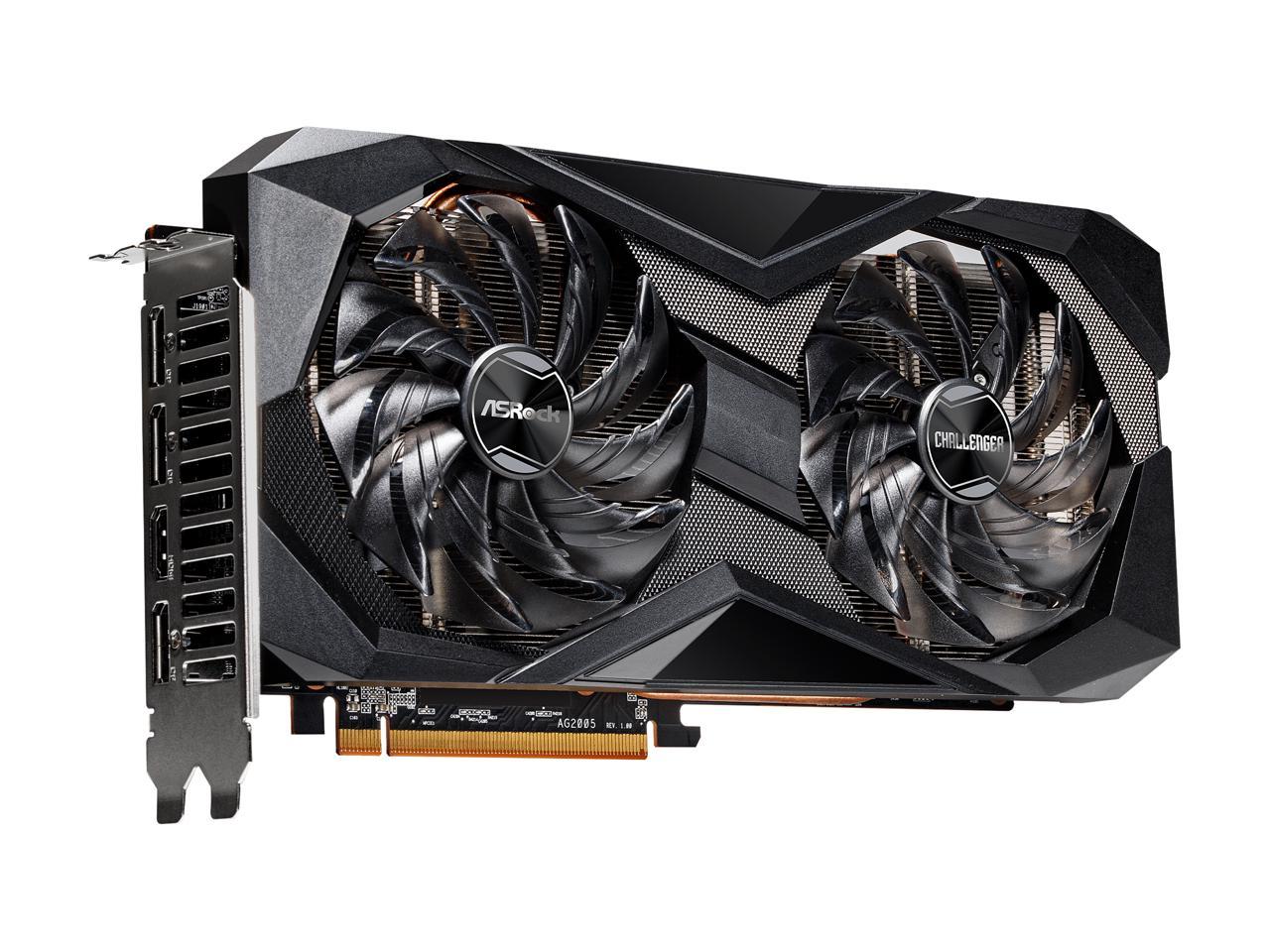 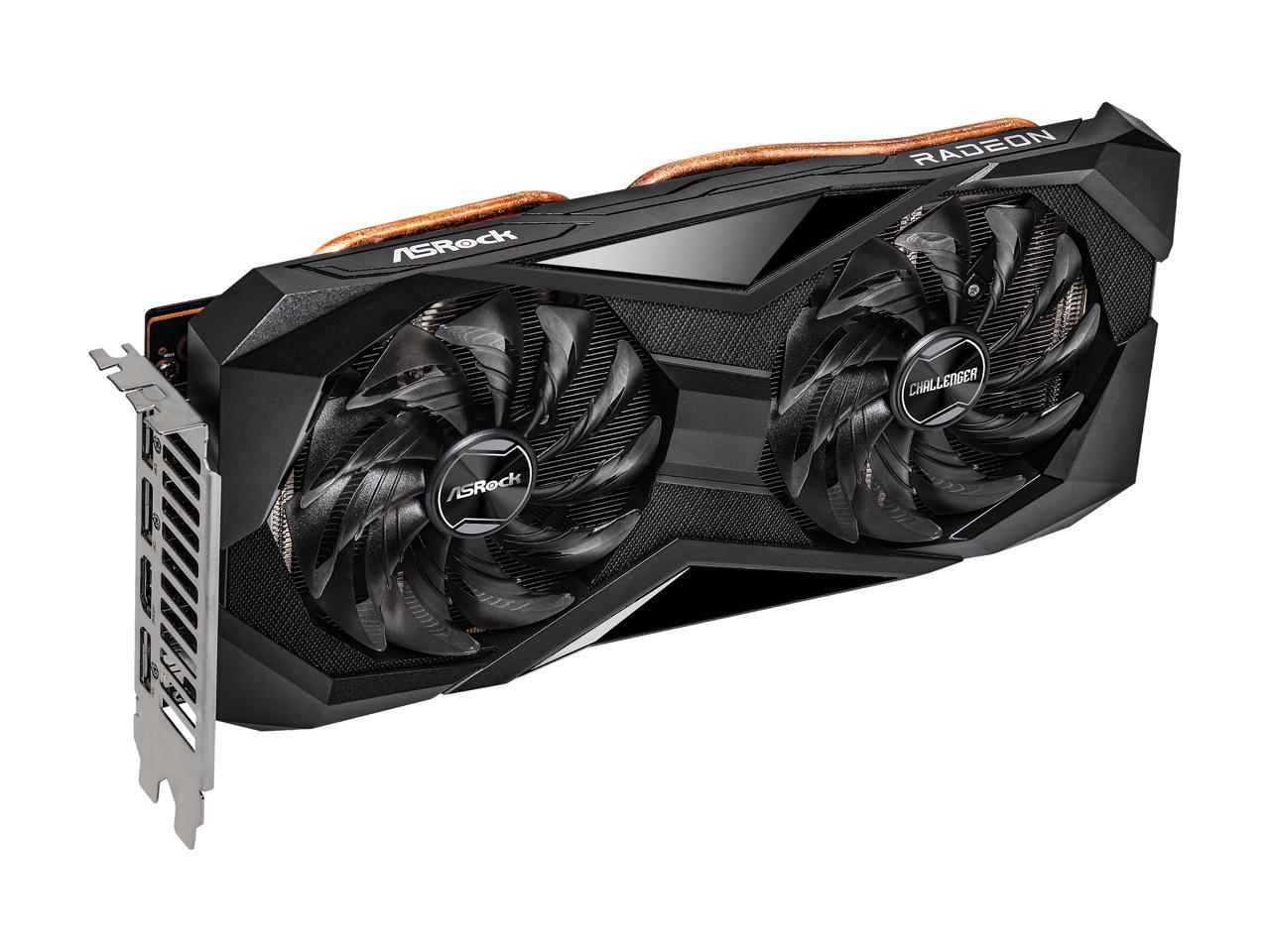 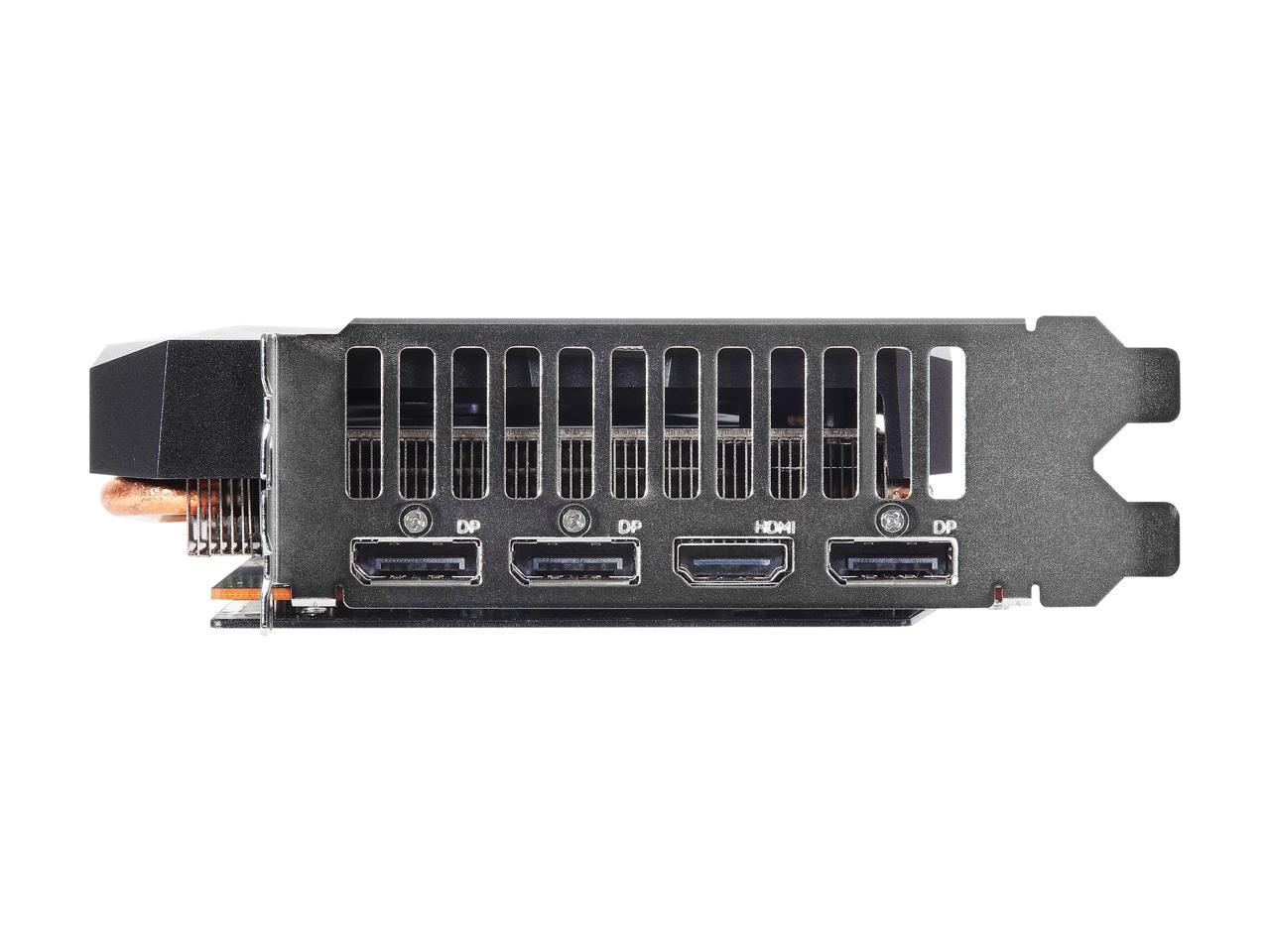 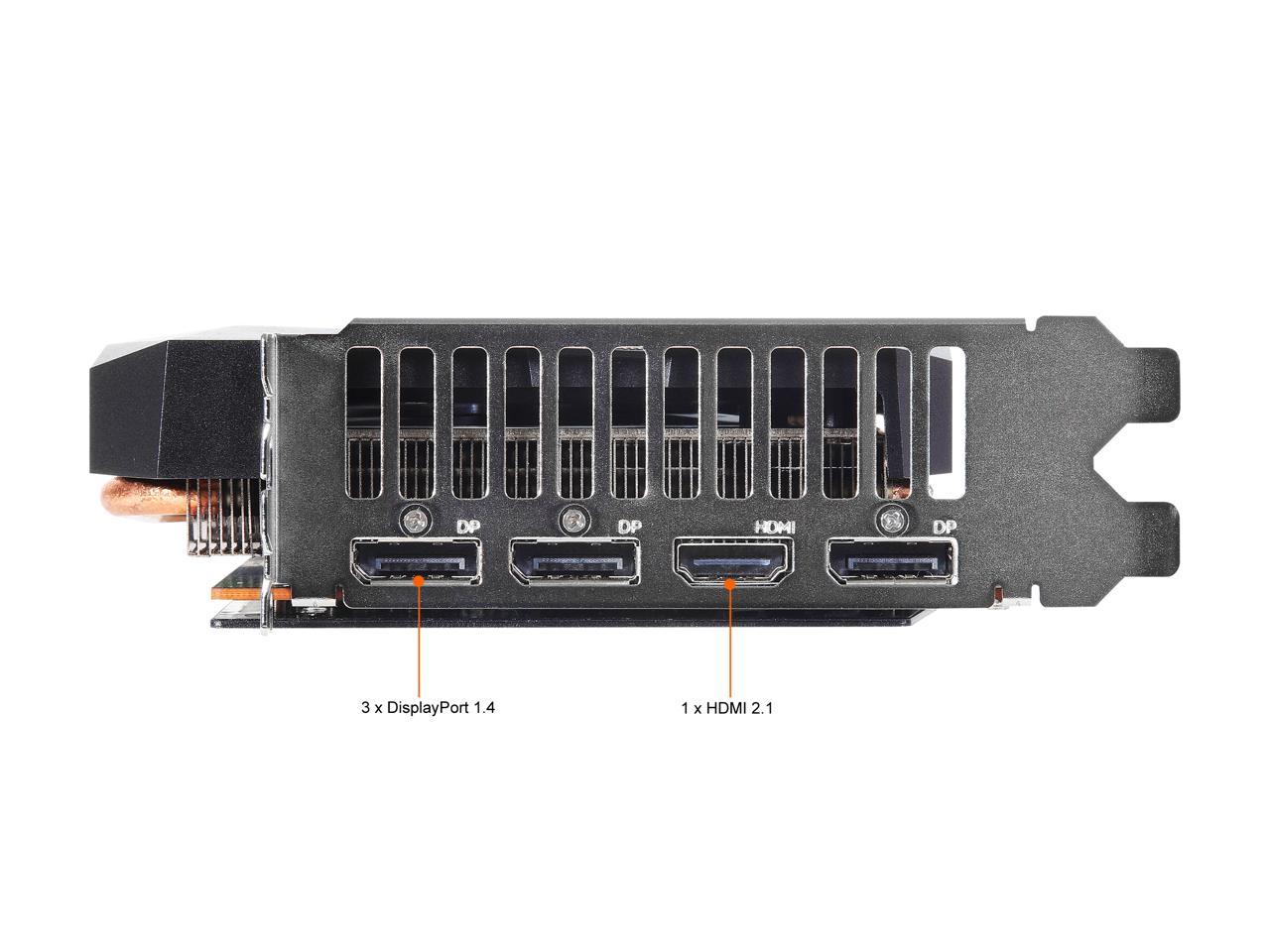 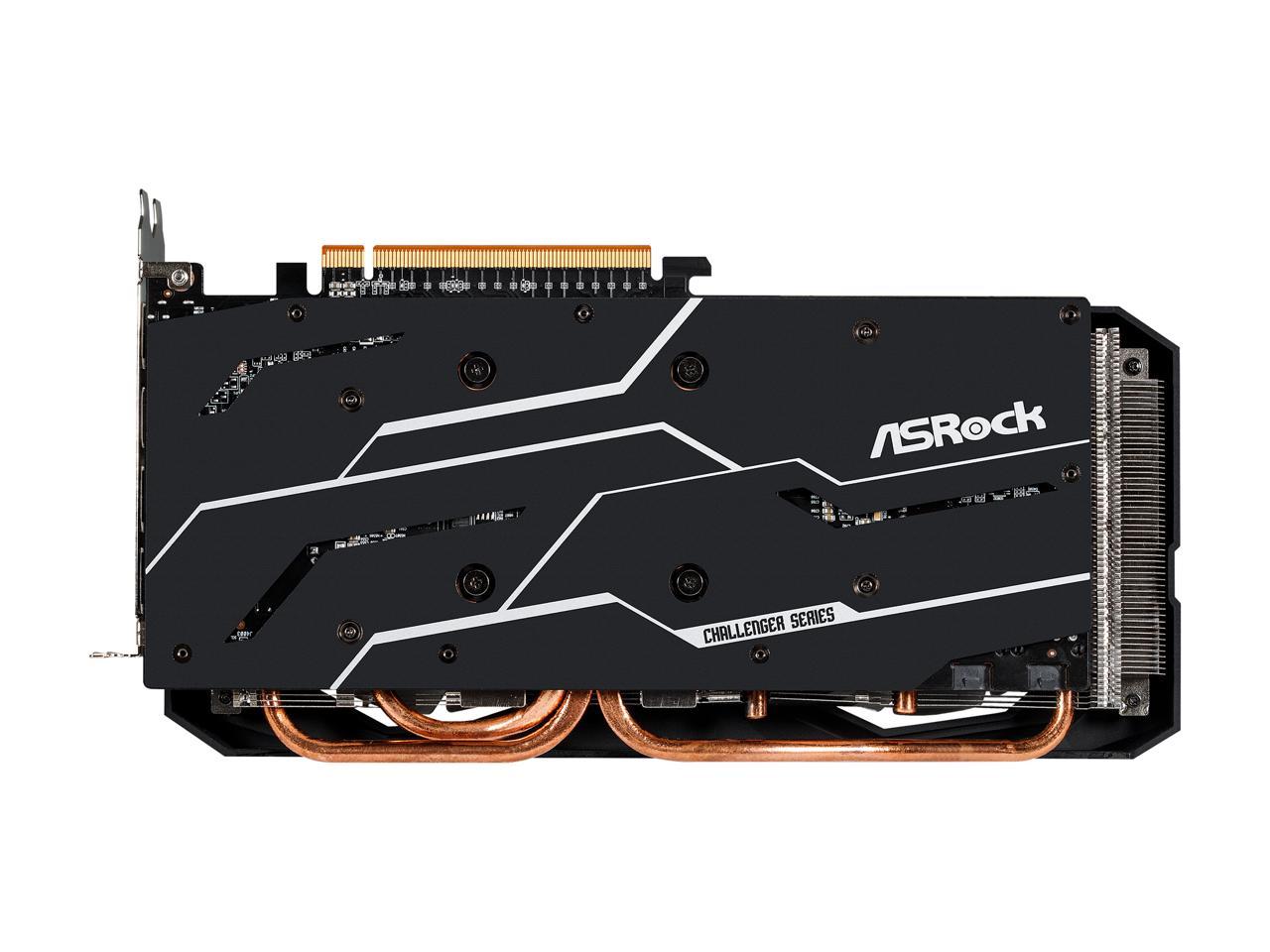 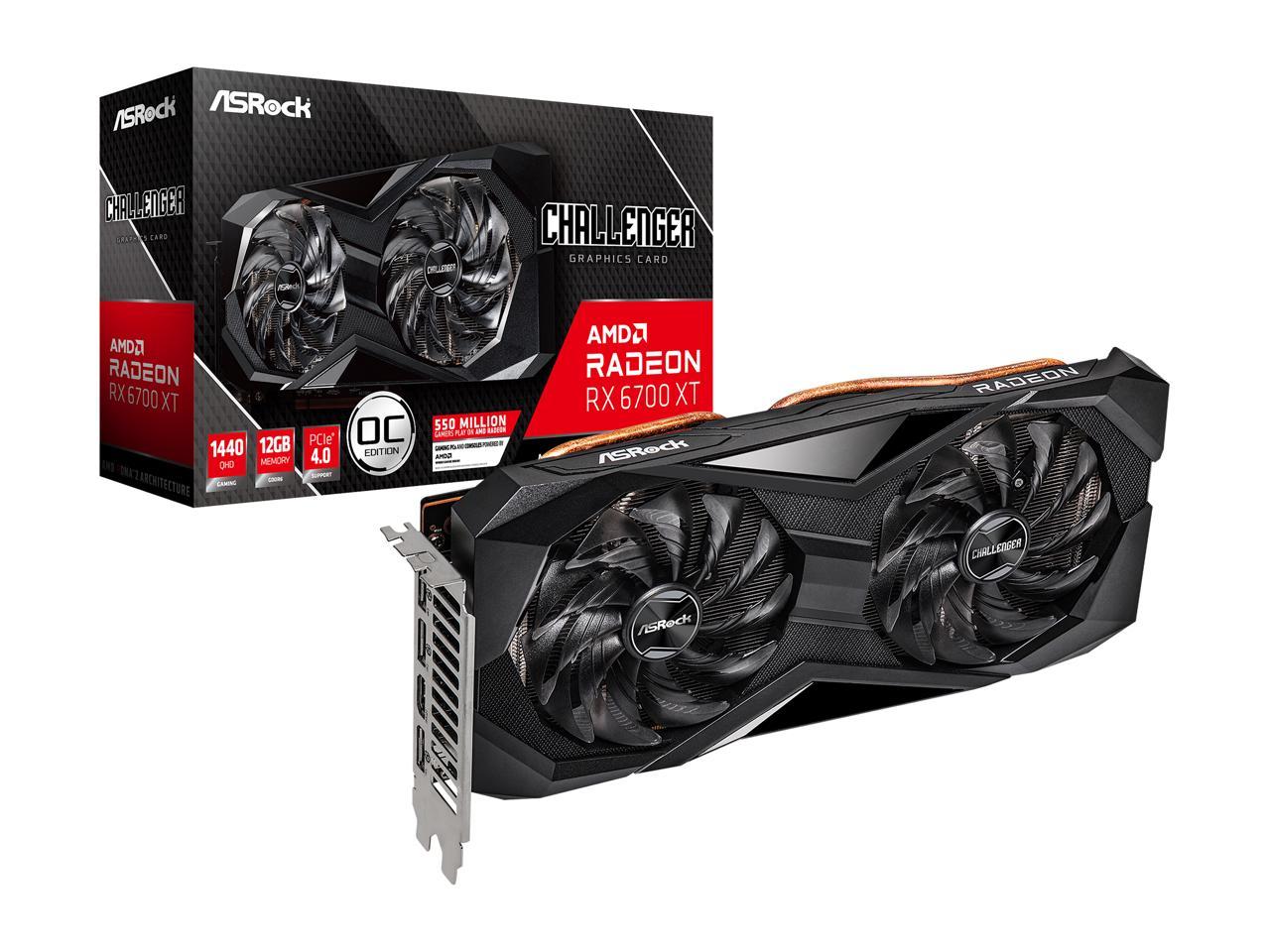 The AMD Radeon RX 6700 XT graphics card, powered by AMD RDNA 2 architecture, is a new generation of performance-class graphics card that plays the latest AAA titles with ultra smooth framerate at FHD and 1440 resolution. An array of advanced technologies is built in to optimize your gaming experience by sharpening images, reducing input lag, and minimizing frame tear.

ASRock’s custom Striped Axial Fan delivers enhanced airflow to optimize cooling from not only the stripe structure on each fan blade but also the polishing surface on the bottom side.

Spin For Cooling, Stop For Silence.

The heatpipes are consolidated to maximize the contact among each others and also the GPU baseplate for the optimized heat dissipation.

Eliminate the gaps in the contact area to maximize heat transfer and thermal efficiency.

The premium thermal pad helps to transfer the heat of the components to the heatsink, improving heat dissipation.

Dr.MOS is the integrated power stage solution which is optimized for synchronous buck-set down voltage applications! Intelligently delivering higher current and driving up to 60A continuous current for each phase, thus providing improved thermal result and superior performance.

Supreme 12K black capacitors with lifespans of at least 12,000 hours. Compared to other counterparts on high-end motherboards that merely have lifespans of around 10,000 hours, ASRock applied Nichicon 12K Black Caps that offer 20% longer lifespans and provide more stability and reliability.

High Density Glass Fabric PCB design that reduces the gaps between the PCB layers to protect the graphics card against electrical shorts caused by humidity.

Pros: . next level from the 580. . Pushes at least 120 frames per second at ultra settings 165 Hz. .Streams pretty accurate while gaming at the same time thats what Ive been wanting to do and I can achieve that with this card. .Can run the card on a 500 W power supply .I do not overclock I do not do anything extra it pushes 120 frames per second out of the box !

Cons: Pricing ridiculous. 2 4pin connectors on the card was minor inconvenience because I had Open my case to find the other connectors that I have hidden away.

Overall Review: Awesome graphics drive. After I pay off my debt I will be getting another one for my wife as we are both PC gamers. It pushes ultra high settings at high frames per second with no problem, keeps cool have no issues so far. It was a plug and play for me. Just had to update it with the given program which I already had because I had a 580. Two buttons upgraded ready to go! To be realistic I was a little skeptical about ASrock, but its been pushing hard for me.

Pros: - Runs most everything I've thrown at it at either max or near max settings consistently at or over 60fps (1080p)

Overall Review: In a world where you need to wait for months until your chance to win the Newegg Shuffle to buy that RTX 3070 card you originally wanted, having the option to buy this card without having to participate in the shuffle was a godsend. I built my gaming PC back in January 2021, and had for 8 months religiously participated in daily shuffles and not once got a break to buy the card I originally wanted. After seeing reviews and charts and such, and realizing that this card is very close in performance to an RTX 3070, I decided to buy it and hope for the best. I have to say, I'm impressed. This card has run most games I've played at 60fps or more using max settings (at 1080p). I haven't tried using RTX in games that support it, but my understanding is that this card takes a huge performance penalty in those scenarios. The AMD drivers and software aren't as bad as I remember them to be, and I was able to use MSI Afterburner to manually modify the fan curves. Speaking of which, the default fan curve is very passive. The card would routinely hit 90-95C temps while gaming, which is something I had never had happen to me with nvidia cards. Adjusting the fan curves has helped me keep them in the 60-70C range, which I am far more comfortable with. But apparently these cards can handle the hot temperatures. I guess what I'm trying to say is, if you haven't been using AMD cards for a while, and you need that upgrade ASAP, this card is a very solid contender for the money. I am very happy with the performance boost (upgrading from a GTX 970) and super happy that after so many months I can finally play in my new gaming PC.

Cons: Price Is Too D*mn High

Overall Review: After installing drivers. Device handled as advertised. Not disappointed. Played a few games and noted that the 6700XT handled higher frames and higher resolution than the 5700XT I am upgrading from. This is a very nice card. Only time will tell as the card ages and newer games release

Cons: Price is high for MSRP drivers sometimes not the best.

Overall Review: Upgraded from a 5700xt. Love the upgrade. Just some driver issues when I first got it , overclocks like a beast. I would say performing equivalent to a 3070. Just dont expect much with ray tracing unless you are playing a single player game and dont mind the frame rates drop

Pros: Goes head to head with 3070, coupled with my 11 gen i7 I stream and play fps games with no problems. Off stream I get max frames for most games. It has a high vram for raising graphics settings for single player games (12gb). AMD gpu software is so great and concise. Dual fan but they are larger than and dual fan Nvidia cards from 20 generation so it fits in your case with no problem. All my temperatures are great for the most part with this gpu.

Cons: The price is higher than what a regular MSRP price should look like. But in this time, in my opinion, hardly a con.

Overall Review: Great GPU, for less than $1,000 this is the best option in todays bitcoin influenced market.

Pros: ASRock has definitely put some decent effort into this video card. It has played everything in ultra that I have thrown at it (2560x1080p), with the exception of RDR2 (even then it looks amazing). Also another cool part is that the video card auto senses when it is needed and when it's not, so the fans will stay off until you play or do something that really needs it's graphical prowess. Needless to say it's totally worth it.

Cons: Waaaay overpriced atm. I did buy it for $800 on Newegg when it was on sale (what a joke of a sale), but that was better than paying $1000 like everywhere else. Also as in the pics it was almost too big for my Mini-itx case (had 1/2" to spare). That was on my part though.

Overall Review: An amazing Video Card from ASRock, I even got to fit it in a Mini-itx case! Even though overpriced atm, it's still worth every penny!

Pros: Great card size size. Much thinner than I thought it would be. Runs nice and quiet. Overclocks nicely and runs pretty cool.

Cons: Price is a bit higher but given the current market it was still worth getting.

Overall Review: I upgraded from a 5700xt Nitro. Have it over clocked up to 2700 and it runs beautifully. The increased Vram is noticeable and nice to have. As I said it's a bit over priced but no regrets on the purchase.