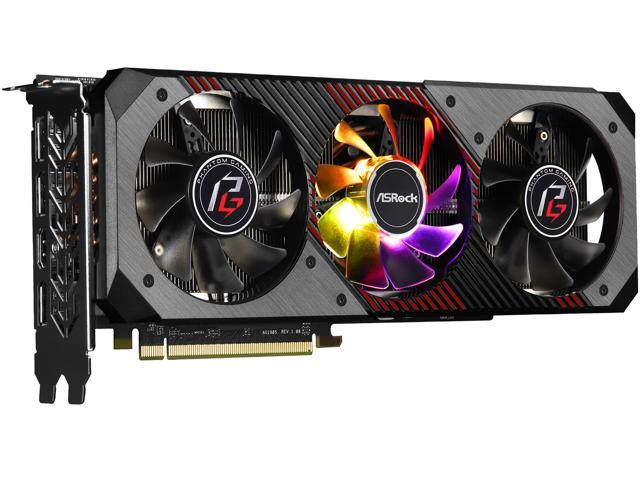 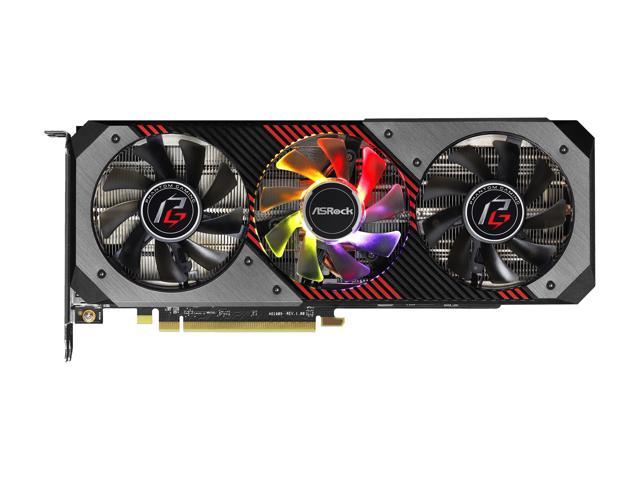 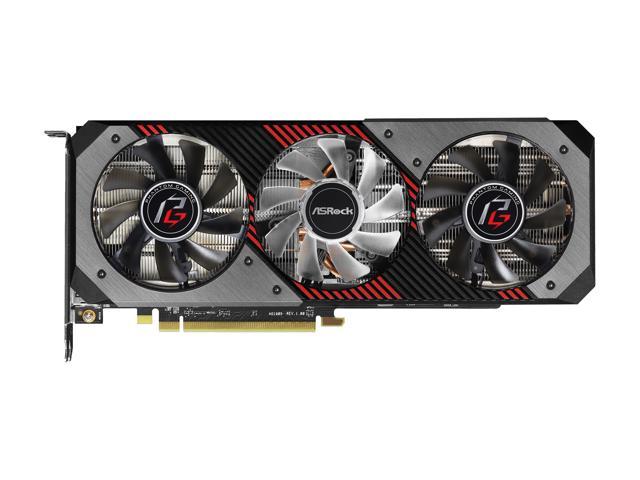 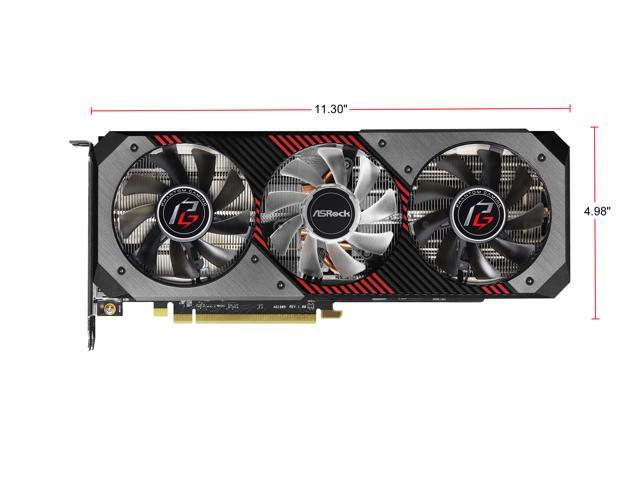 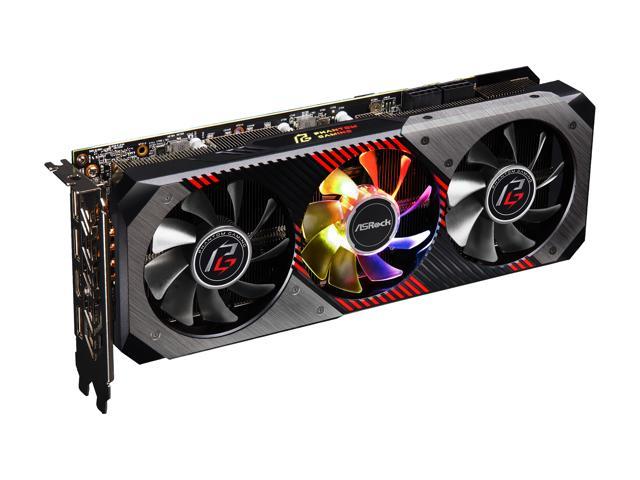 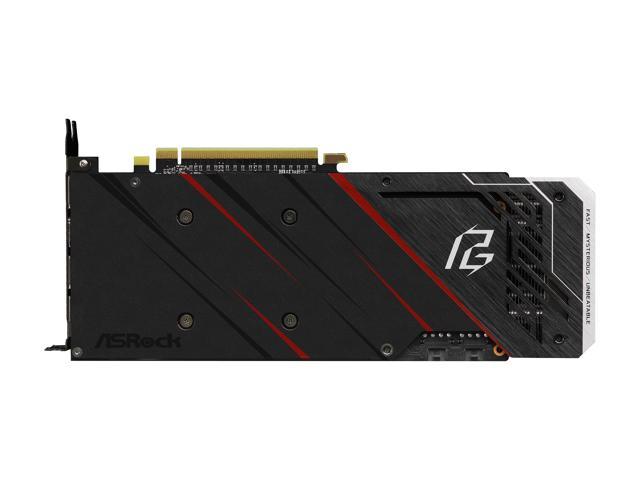 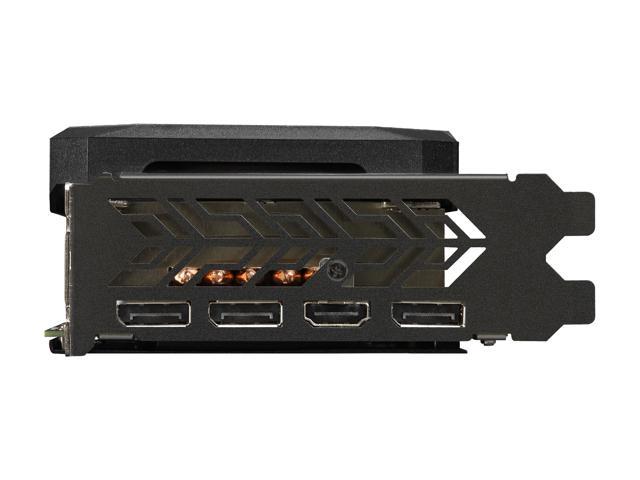 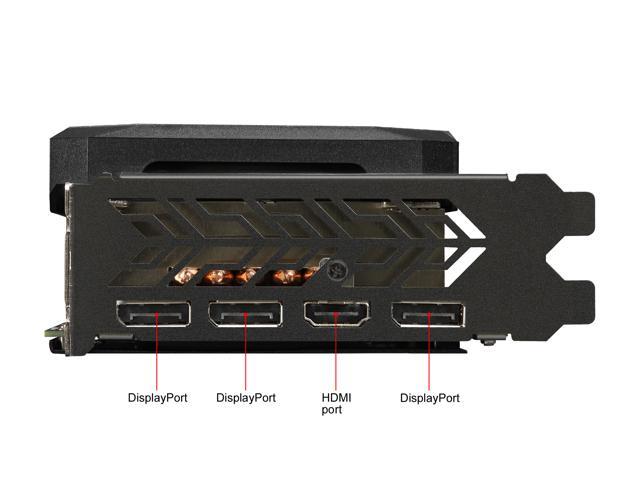 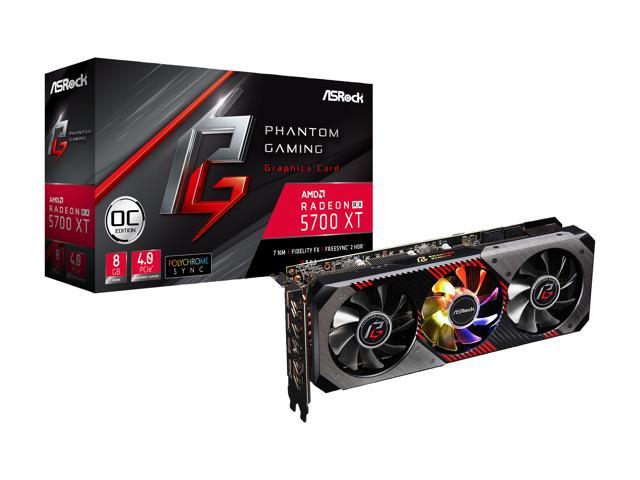 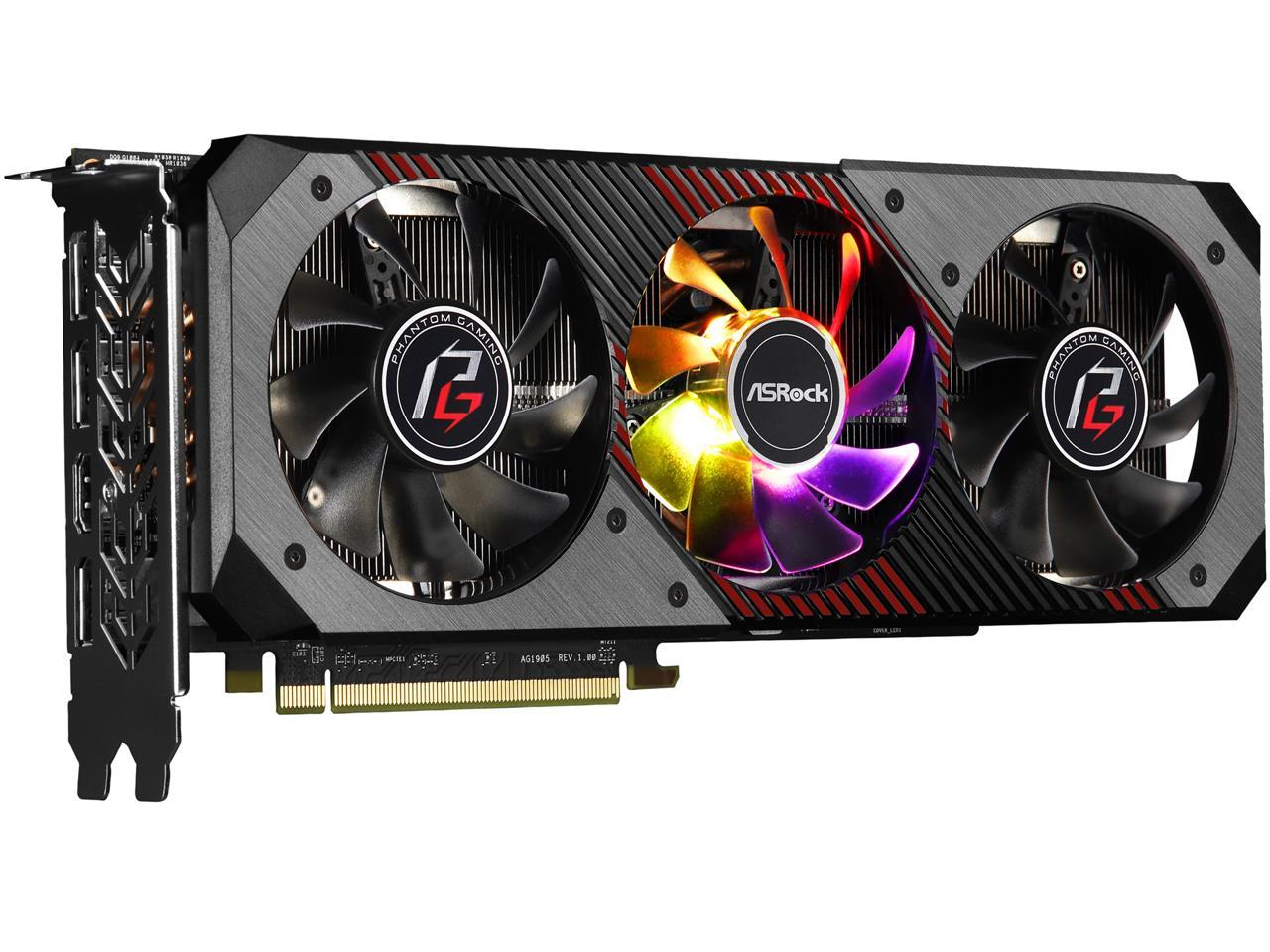 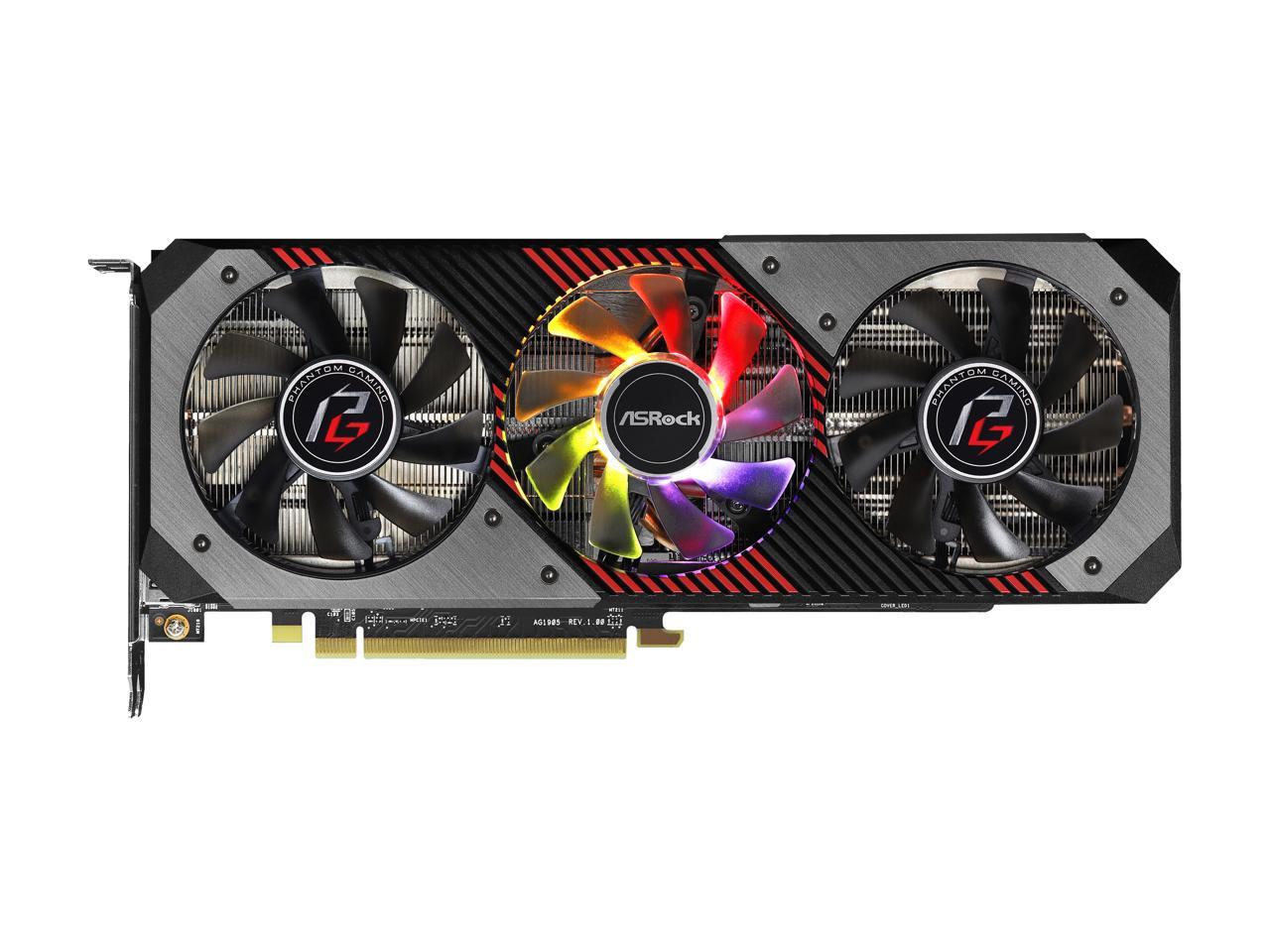 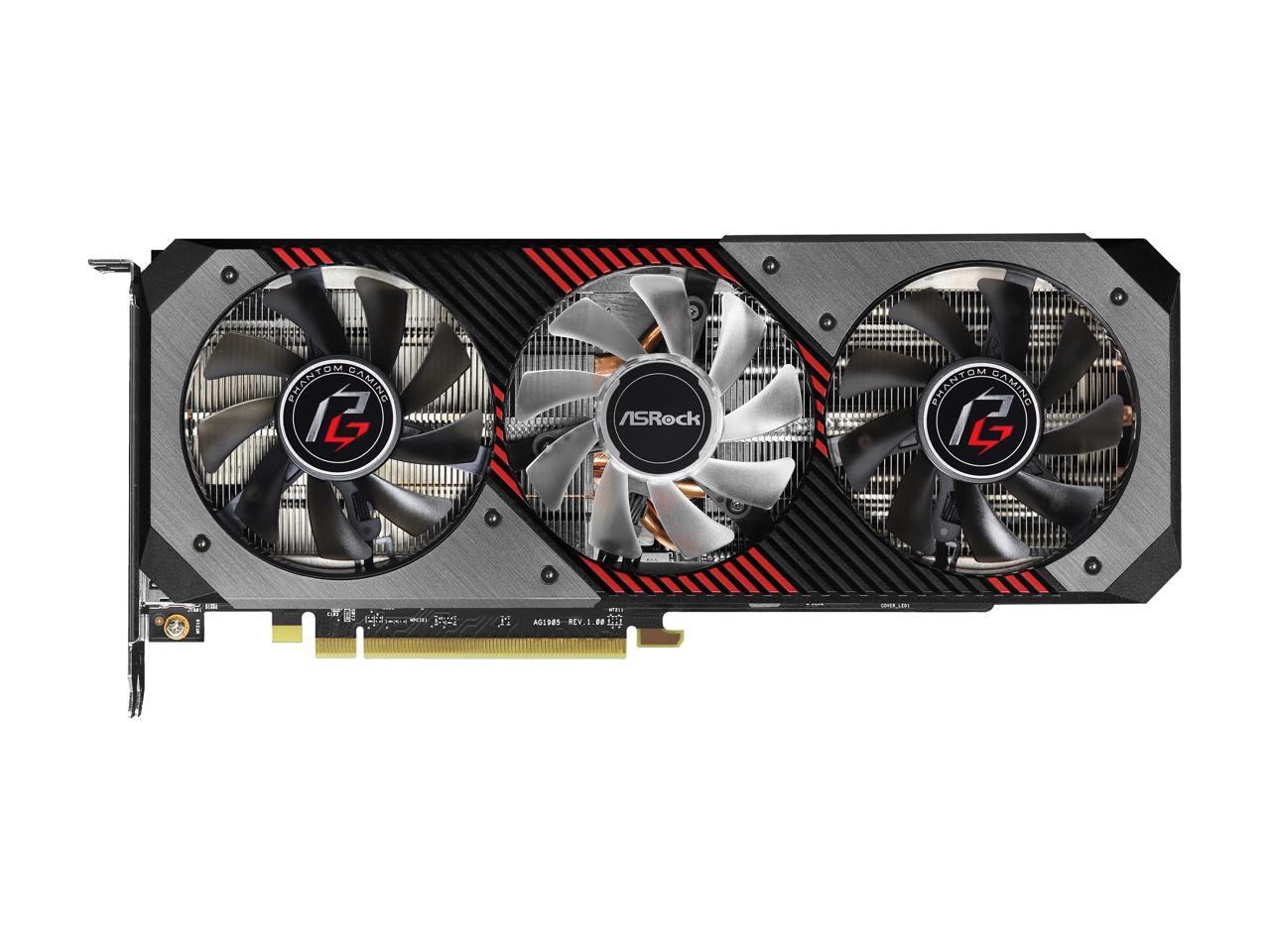 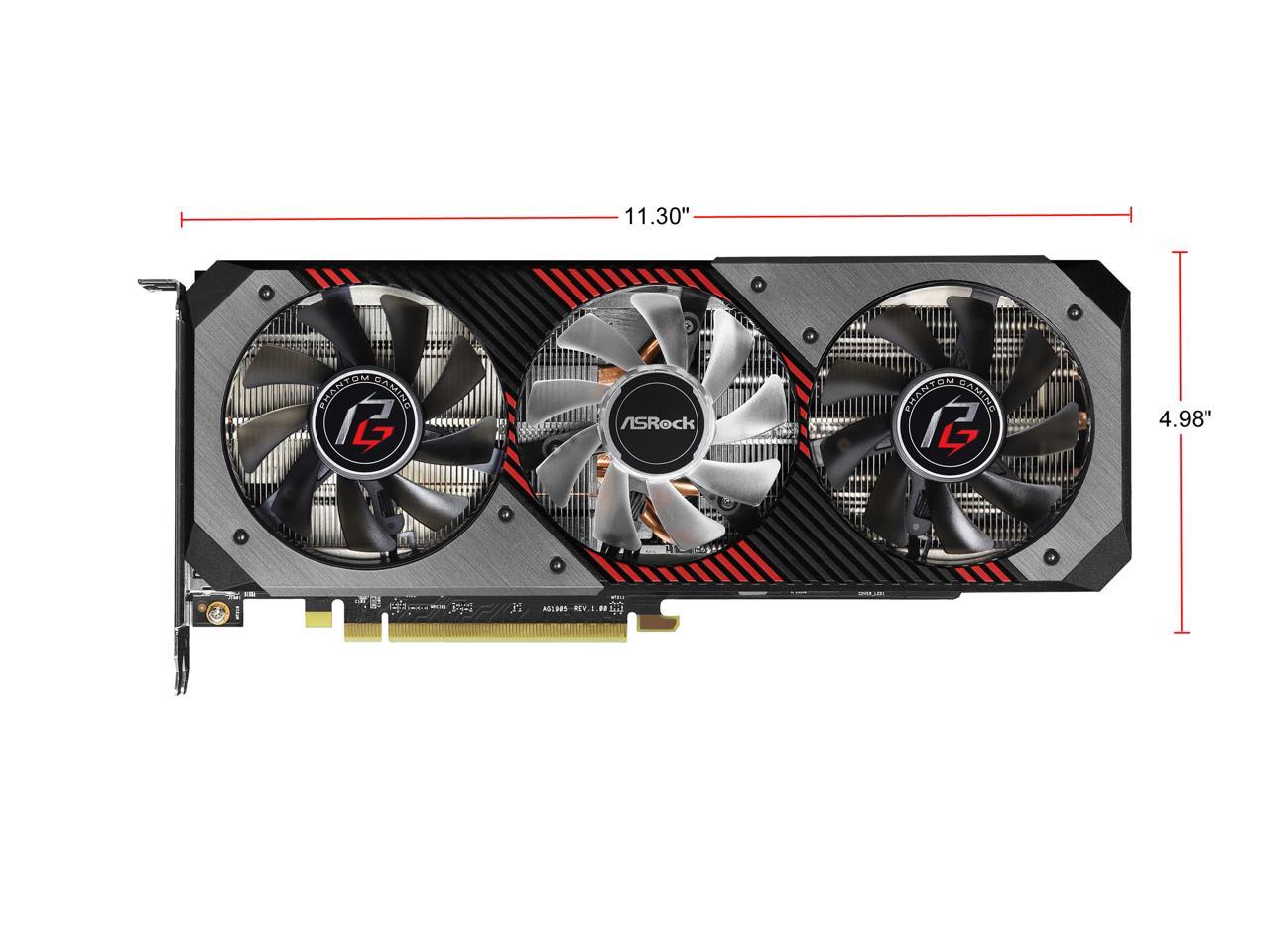 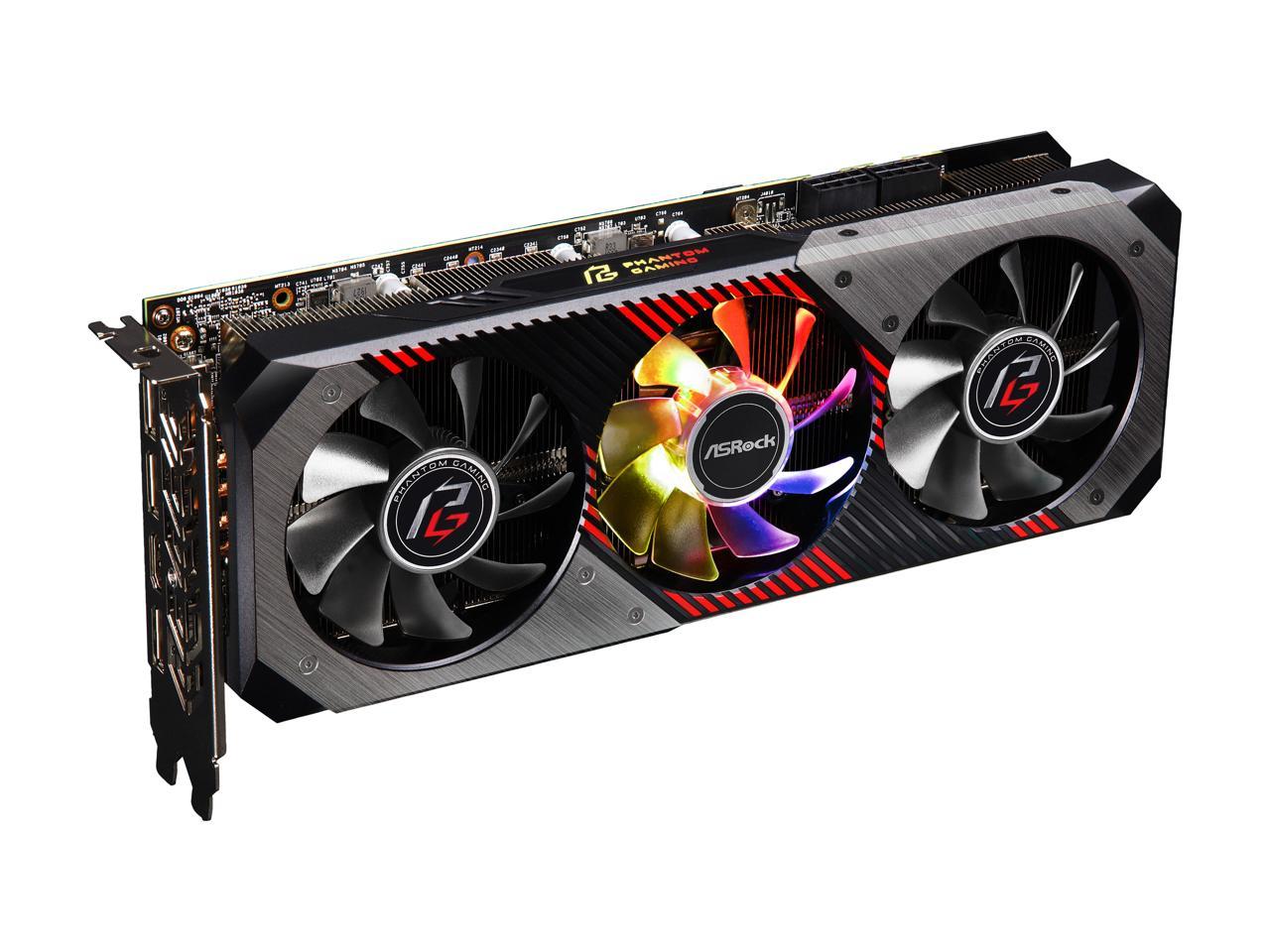 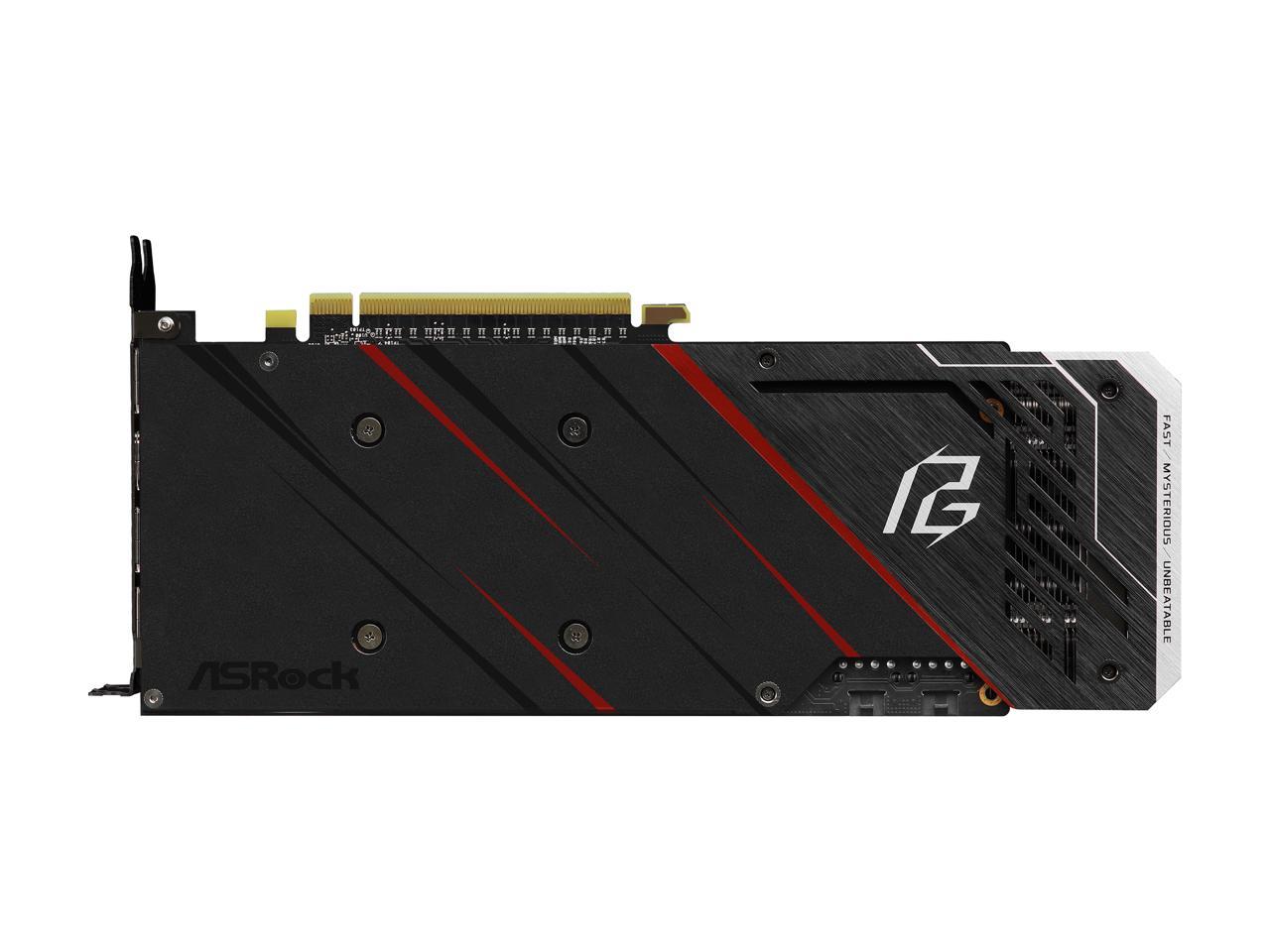 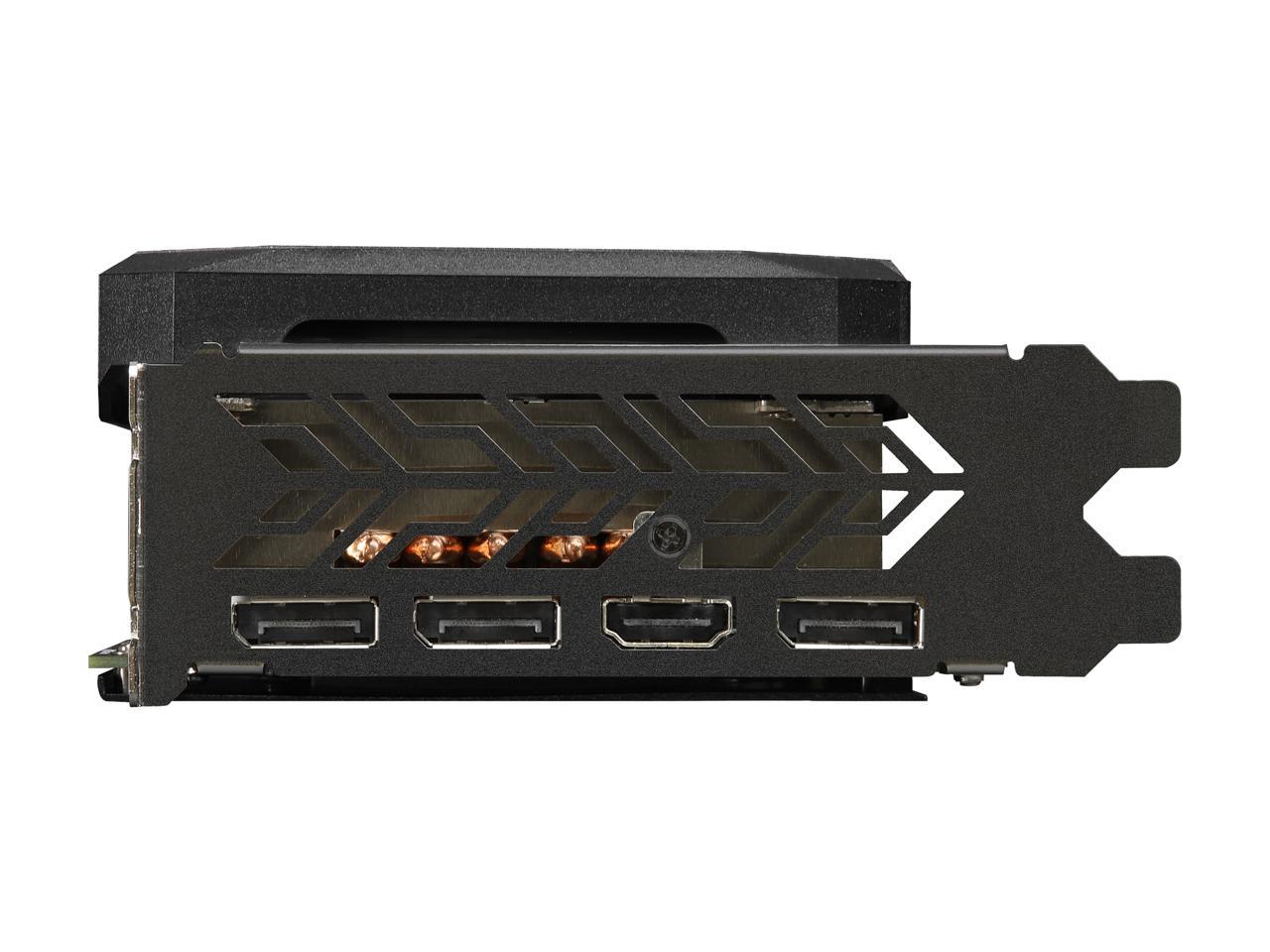 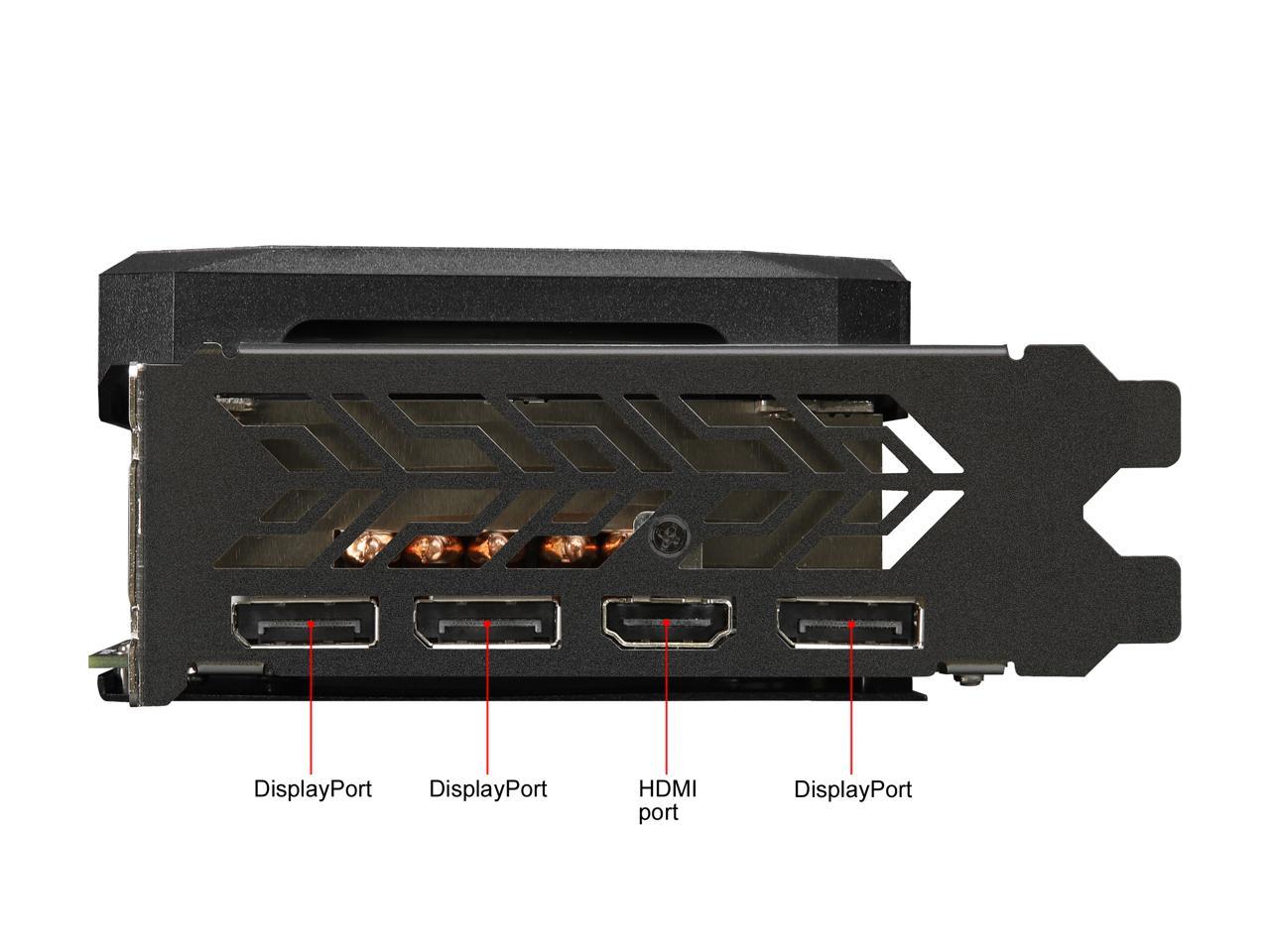 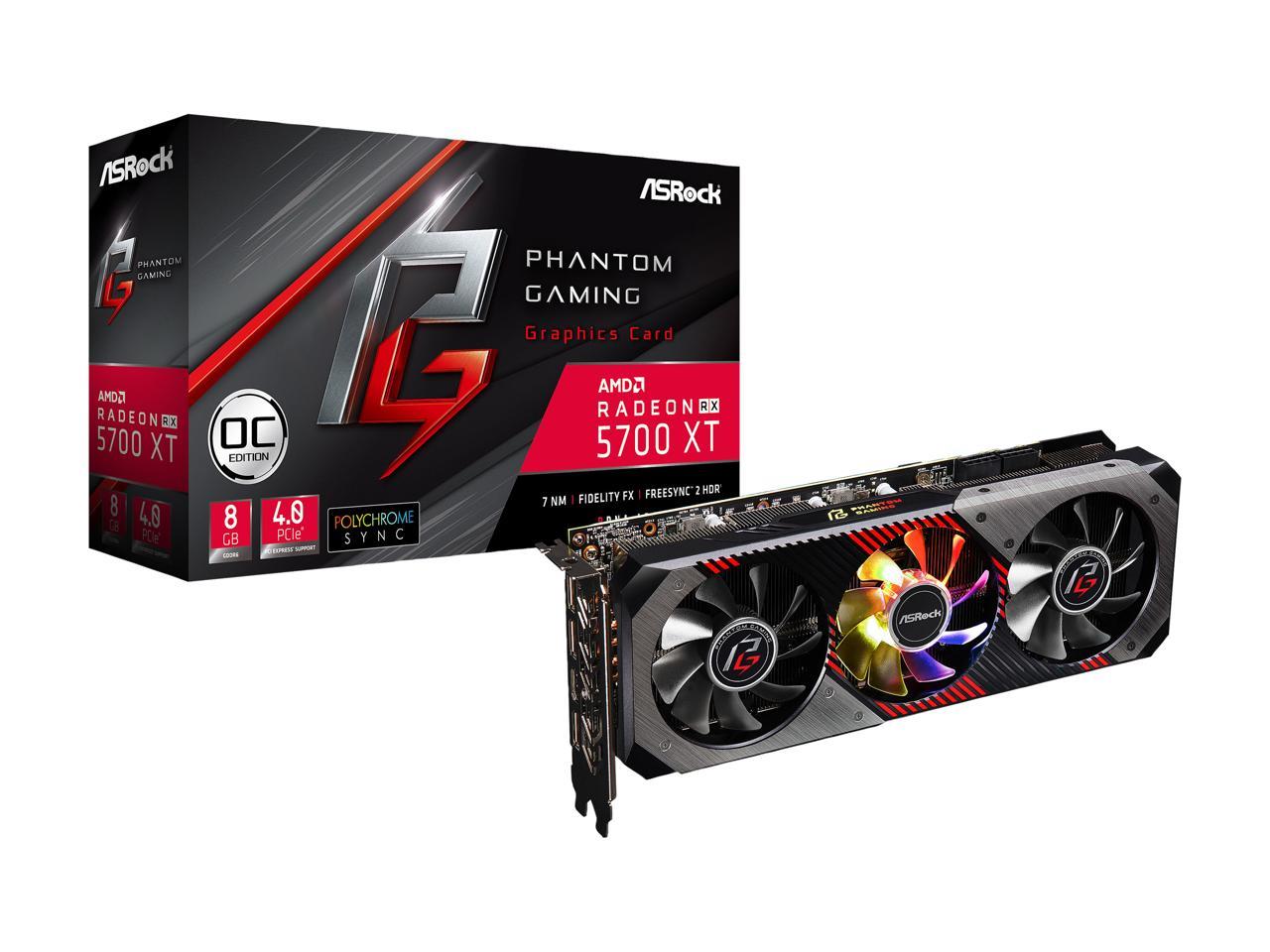 Turn your PC into a gaming beast with ASRock's Radeon RX 5700 XT graphics card. By harnessing the power of 7nm RDNA architecture and GDDR6 memory, it enables smooth, responsive experiences for AAA & esports gaming. Built-in ARGB LEDs support Polychrome SYNC for uniform lighting while the stylish metal backplate offers sturdy protection for the PCB. You can utilize advanced technologies from AMD to get perfect visuals for your gameplay, including Radeon Image Sharpening, FidelityFX and more. Create your own unique colorful light effects with the integrated ARGB LEDs. It can also be synchronized with your ASRock motherboards that support Polychrome SYNC. Provides more area for the larger heat-sink to enhance the thermal capability to make the graphics card cooler and quieter. This makes the fan stop when the temperature goes low for the complete silence. Not only can it handle 4K graphics but also supports the next generation 8K video output for the ultimate visual experience.

FidelityFX is a collection of high-quality post-process effects that automatically collapse multiple effects into fewer shader passes to reduce overhead and free up your GPU for the visceral experience you demand.

No Stuttering, No Tearing—Just Gaming. AMD Radeon Software Adrenalin 2019 Edition gives you more control over your gaming experiences. The software's intuitive interface enables players to stream, share and tweak graphics settings in real-time without missing a second of the action or compromising in-game performance.

3. Overclocking AMD processors, including without limitation, altering clock frequencies/multipliers or memory timing/voltage, to operate beyond their stock specifications will void any applicable AMD product warranty, even when such overclocking is enabled via AMD hardware and/or software. This may also void warranties offered by the system manufacturer or retailer. Users assume all risks and liabilities that may arise out of overclocking AMD processors, including, without limitation, failure of or damage to hardware, reduced system performance and/or data loss, corruption or vulnerability.

Cons: -Junction Temp is a bit hot stock (not hitting 100C, but close), see review for reason -Stock Fan Curve Maxes at 50% -Stock Fan has 0 RPM mode on by default -Both of those seem to be AMD things and not ASRock things

Overall Review: To start, I am no expert on this stuff. I built my last computer when Bulldozer came out (I was sad until this build) but I had upgraded it since then with an RX 580 8GB. Current Rig: Ryzen 5 3600 @ 3.6 GHz Noctua NH-D15 CPU cooler Asrock Phantom Gaming 4 X570 Mobo 64 GB (2x(2x32 GB)) Teamforce Vulcan Z @3200 MHz ASRock Phantom Gaming D RX 5700 XT 8GB @2100 MHz + memory @1750 MHz Crucial MX500 1TB M.2 SSD Anyways, I find it strange that most tech youtubers focus on the cheaper Challenger D or the more expensive Taichi. I would honestly prefer to see how this card stacks up in the mix. To start, my card came stock set to 2200 MHz core clock (I assume that is the boost clock) and 1750 MHz memory clock. As you can imagine, that is definitely a reason to run hotter than average. After running it through 3dMark Timespy and seeing a combined score of 8900 (my Ryzen 5 3600 might be a bit of a bottleneck, for scoring anyways), I dumped that core clock down to 2000 MHz and saw an overall 400 point gain. I then pumped up the memory to a cozy 1850 MHz and saw another gain, then pushed the core clock back to 2100 MHz which gave me a combined score of slightly over 10,000. Not great, but not bad, considering an old OC FX 8350 + OC RX 580 8GB were only getting me a combine score of about 4200. Definitely a good improvement. So, I figured out the problem there and I was easily able to give the system some power headroom and I ended up leaving the core clock at 2100 MHz and the memory clock at 1750 MHz. Now, you're probably wondering about that memory. Well, even though the Phantom Gaming D page does state that the VRAM is backed by thermal pads (between them and the metal backplate) I haven't opened it to confirm. What I have confirmed is that gaming at 144HZ with the memory boosted to 1850 MHz or 1800 MHz saw the screen black out after about 30 minutes. I am running dual monitors. One runs 1080 60Hz refresh rate, while my primary was running 1080 144Hz refresh+Freesync. I saw a moderate time to black screen improvement from dropping the refresh rate to 120Hz and dropping the memory clock to 1800 MHz and then 1750 MHz, with the later being fully stable and never black screening. So, I'm not sure what is going on there, but I assume that since I allowed for a 50% increase on the power limit, and the memory wasn't being underpowered at that frequency, then it is more likely that the VRAM was running too hot. Either too hot for the ambient air in the case to wick away from the backplate, or perhaps the thermal pads aren't in full contact with the backplate, again, I'm not sure. That, or Freesync has something to do with it. I haven't retested without Freesync, but I am running without it as of current because some games just seem to hate it overall. Moving on. So, with the stock clock at 2200 MHz and the memory at 1750 MHz I was seeing junction temp hit 95C and edge temps hit 80C. Since my changes to 2100 MHz core and 1750 MHz memory, I am maxing my junction heat at 80C and my edge temp somewhere between 60-70C. So, great move overall to get those temps down. Oh, and one final point, all 5700xts seem to max their clocks 50 MHz below whatever is set (so 2100 MHz actually maxes out at 2050 MHz). I dont know why, but it has been confirmed by some tech websites and youtubers. Probably a part of the drivers or card bios or something. I may edit this later if I decide to do more tests, but the bottom lines are: -Make sure you clocks aren't too high before looking at temps. -It actually runs fast at a clock speed closer to what's printed on the spec sheet (who would have guessed?) -Memory may be OCable, but not sure if it can handle the heat -Tested for stability at 1080 60HZ, 120HZ, 144HZ on Ultra Settings w/o Freesync (or vsync, as if anyone uses it anyways) -Tested for stability at 4k 60Hz on a TV at Ultra Settings -Some tests were older games like Far Cry 3/4 and GTA V -Newer Games tested were Resident Evil 3 Remake, Shadow of the Tomb Raider, CS:GO, Endless Space 2, War Thunder, Warframe -Not benchmarking, just checking consistency, it ran smooth on each game and ran for well over an hour on each -I wish a manufacturer would make an AIO for this specific card because I like it. Edit: I changed the tuning again to 1950MHz/1000mV. RAM is clocked to 1800MHz. It all runs stable for 3dMark TimeSpy and Unigine Heaven. GPU score on 3dMark is coming in around 9400. It idles around 32C in a 24C room. I also changed the fan curve so that it will hit 60% fan at 80C and 100% at 90C. After playing through RE2 Remake and MGS:V on max settings for a couple of hours, I only saw the temps hit about 75C. A lot of other people online said that 1900/1000 had better stability, but I have yet to have an issue with ASRock's product at my current settings. I would definitely source my parts from ASRock again.

Pros: Plugged in to mobo, run Amd software, get the Asrock tweaker on Asrock page, choose from OC, standard or silent (do not get the Asrock carddriver). Believe in the power of AMD Adrenalin 2020 Edition 19.12.3 and boom all runs well. 40c on idle, 60-70c on gaming on highest settings possible. I didnt mind the light effects presets of the card out of the box (cuz thats the only light i have on my pc) not a fan of RGB though, tried to download the Polychrome Sync to see if I can turn it off, but yeah it works well, but uninstall it again and let that small light lit my case, it didnt bother me even on darkest room while gaming so i let him do his own thingy.

Cons: Dunno if this is a con. during that time (mid DEC 2019) coudnt find any source of review even on youtube. Im the person whos not particular regarding on the size cm, mm etc , but for comparison, i simply compared it to my old msi gaming x 1050ti dual fan, its a bit longer, checked on my pc case choice if it can accommodate that size, since it can, i buy it. The 1st thing I totally said first time on my hand is. Its fat and narrow, beefy but narrow. though its fat still it only consume 2 bracket at the back, my msi gaming x is more wider. Wider fans. Triple fans but it is small fans. I tend to hear the fan noise on heavy load but since i wear headset, then its fine for me. Fan noise on heavy loads only base on auto settings and long usage but temps remains 60-70-80ish depends on room conditions. Im on a budget so sometimes i didnt open my room ac. Its a power hungry card consuming 210-280 watts on my monitor 1080p and sometimes up to 330w tested on 1440p settings-friends monitor (at least on games that I played) and I think my electric bill will rise up. lol So if you are also considering the electric bill usage dont buy this. But you can lower it by lowering your game settings so the card wont work harder and dont consumer more power but of course your compromising the gaming experience. Should at least make the fan a bit bigger, its tiny, at least for me.

Overall Review: There is nothing I haven’t liked about this gpu so far. Definitely worth the money and the performance is spectacular!

Overall Review: This card is a great Budget option for a 5700 XT. Runs Apex legends at 1440p with zero issues. People complaining about heat issues probably have air flow issues. Getting 70C on 1440p at load, Meshify C with 2 intake, and one exhaust fan. AMD drivers are a mess, rolling back to 19.12.2 fixed black screen issue that many people complained about. Not really the cards fault.

Pros: 1) YMMV, but this undervolted just fine to 1900@1000mv in Wattman just fine. Could probably get aggressive with it. Hefty backplate, nice RGB, and adequate cooling.

Cons: None found yet, just be wary you will need 2 8pin connections or a splitter.

Overall Review: I bought this to replace my GTX 1070, and I love it. I was able to pop it right into my system, ran DDU, then installed the radeon drivers and it’s been working flawlessly since. I ran some games after using the Radeon auto OC, and saw great in game performance with the core clock at 2050mhz and it drawing only 220W!!

Pros: Austin's review below on 1/04/20 pretty much sums up my experience. Reasonable Temps, without being too loud (with tweaking), and it's performance is exceptional. Quieter than my RX 580 and the 290X I had.

Cons: So far none.

Overall Review: After all the reviews and you tube searches, this one is a diamond in the rough with all things considered. Best bang for the buck in regards to 5700 XT series. If I could give it 4.5 stars I would, and to give it 5 stars, I hardly ever go that high in anything.