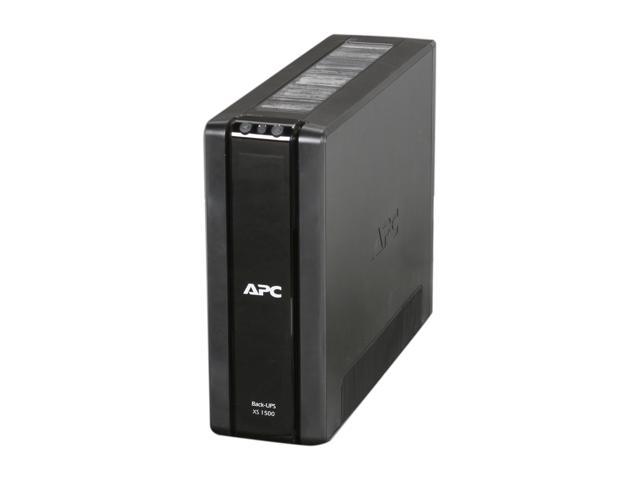 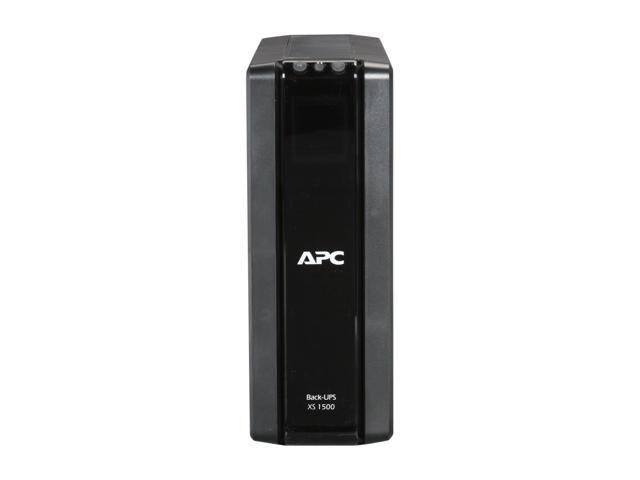 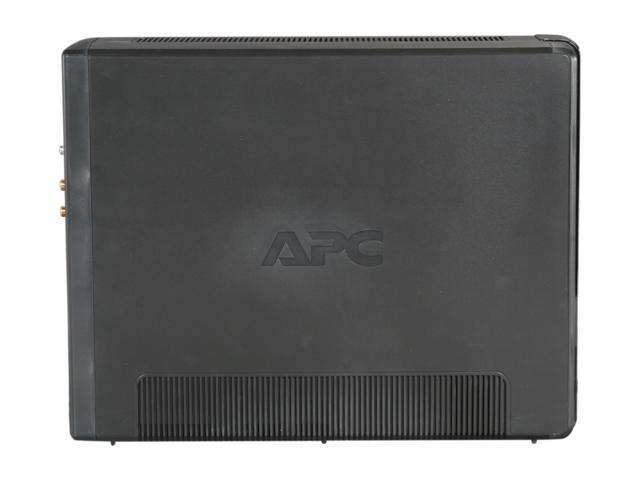 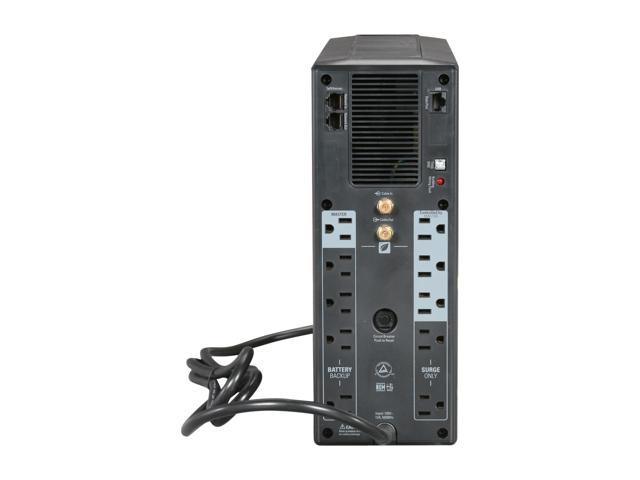 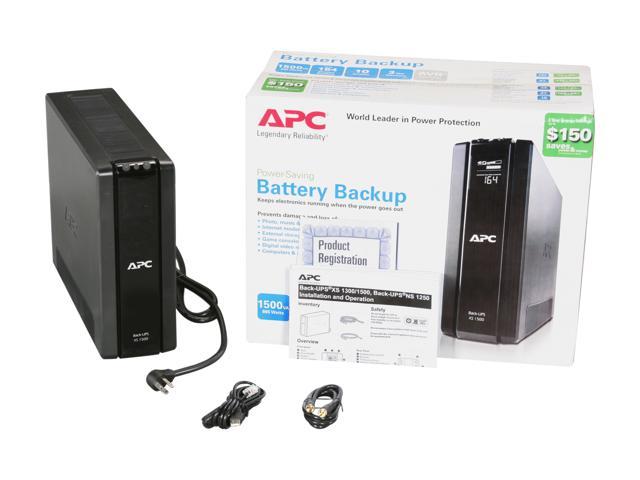 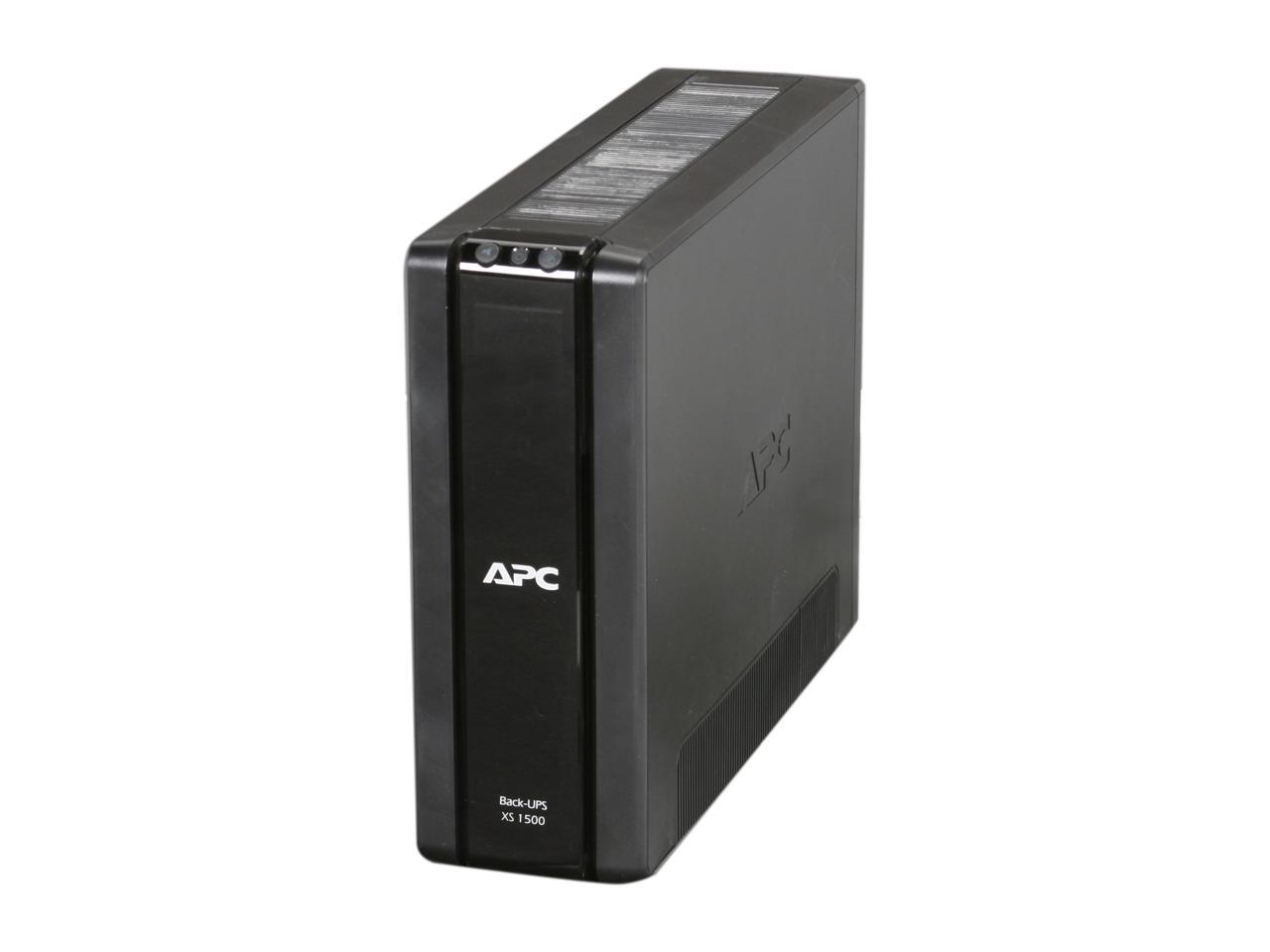 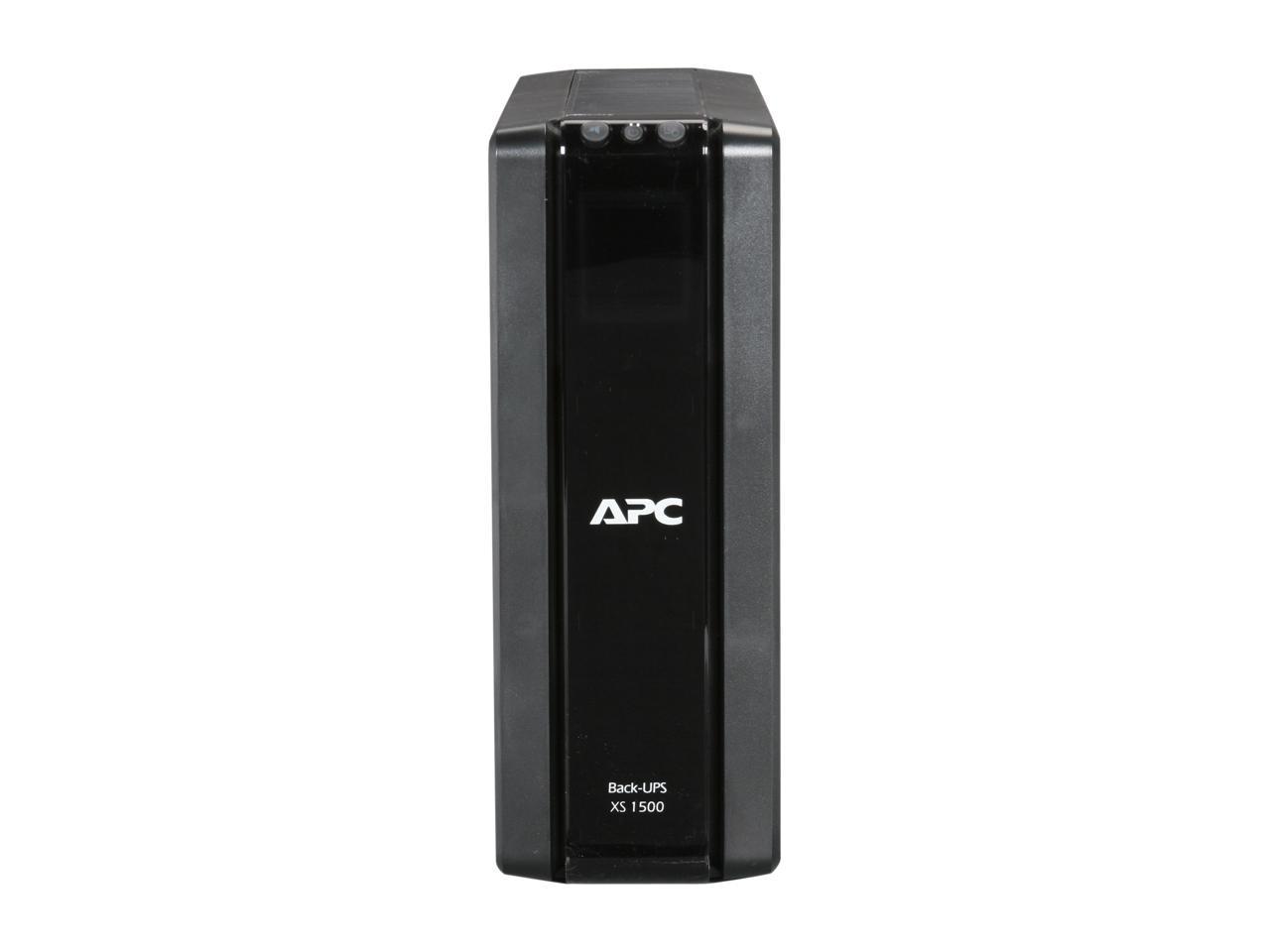 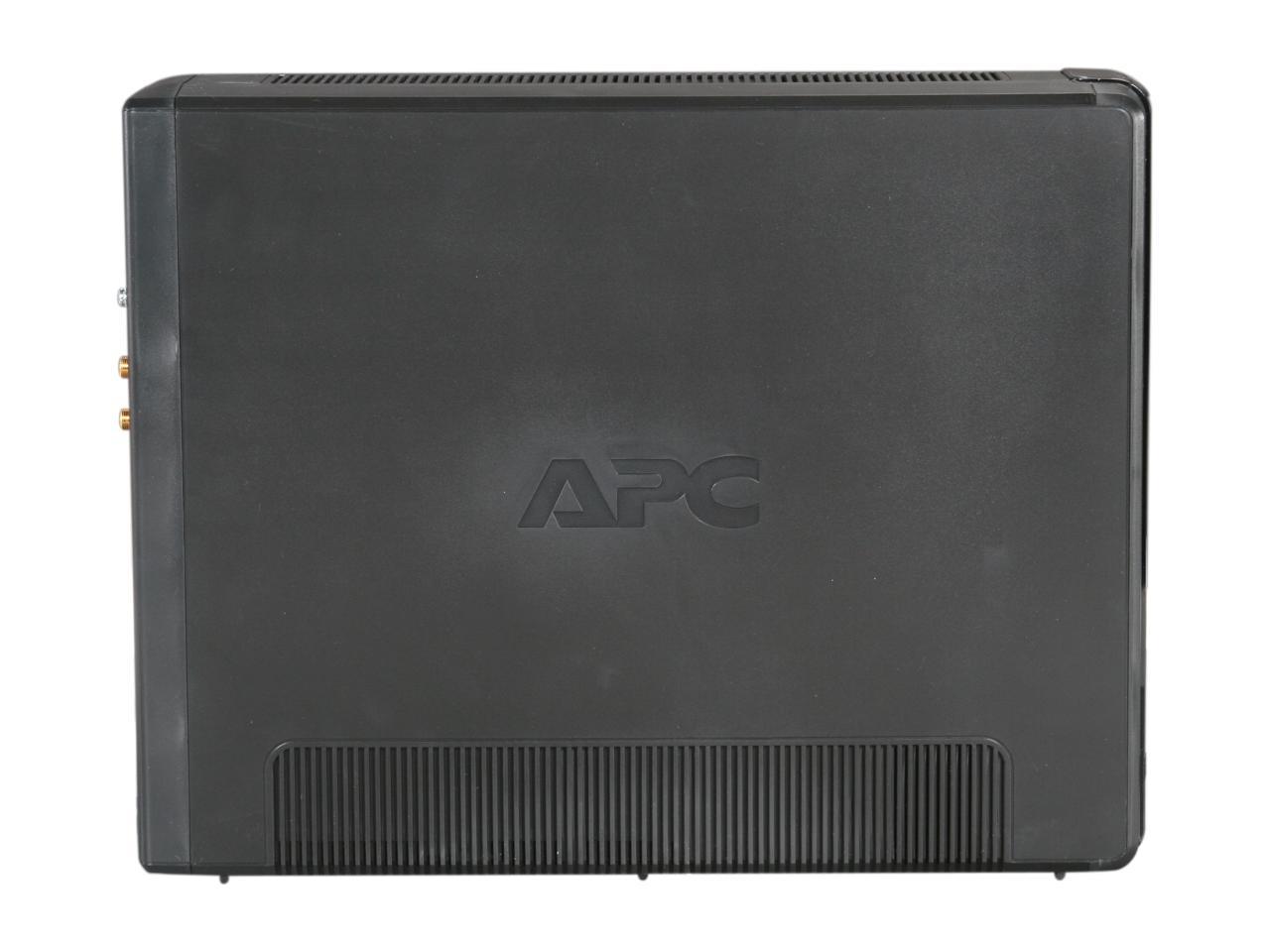 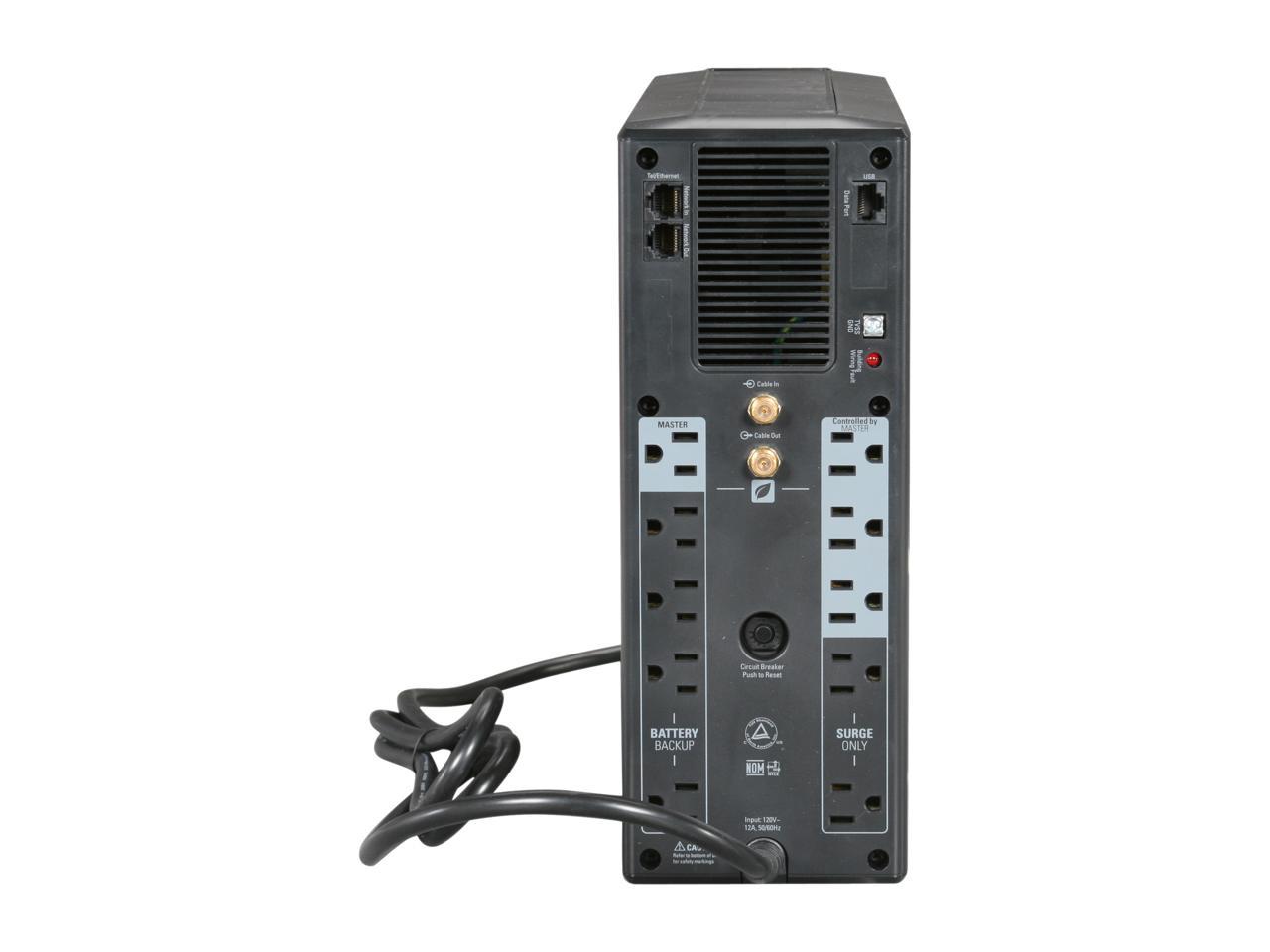 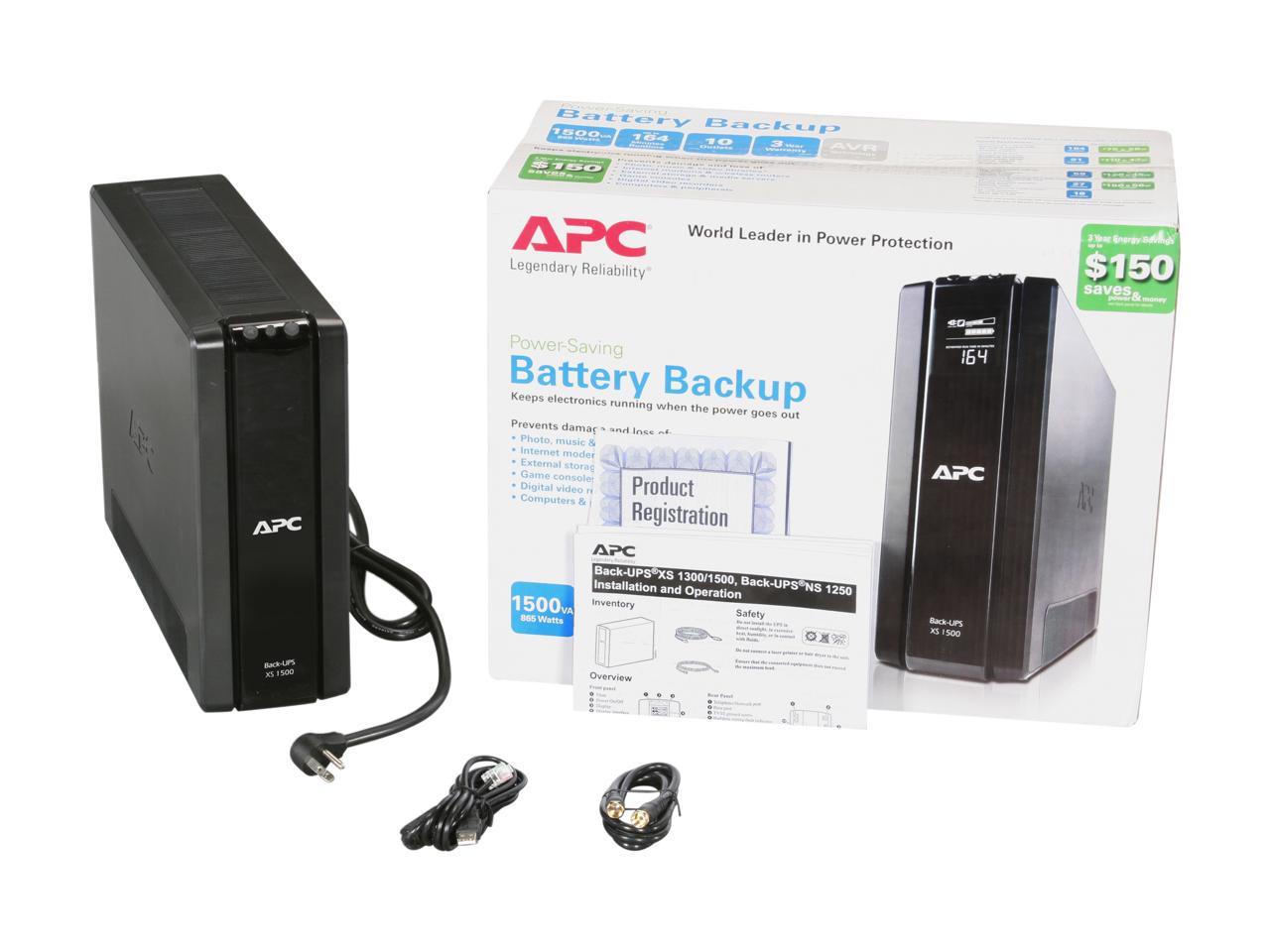 (20) Write a Review
OUT OF STOCK.
Fees for brokerage and duty included in price.
Overview
Specs
Reviews

Learn more about the APC BX1500G

Pros: It's APC, very patient technical support agents, lots of battery back up time given you're not trying to power a monster server or some other insane power drawing device off this. Of course I haven't owned it for a very long time so I can't comment on the long term stability, but for now, it's solid as a rock. I didn't buy from newegg but I suppose that's irrelevant. PowerChute software is actually really nifty as it shows lots of info about the unit. You can enter in how much your electric company charges per kiloWatt Hour and it will give you info like how much it's costing you per day to run the unit, CO2 emmissions rate, and how many kWh per day you're using. PowerChute also gives you good overview of all the times the unit went on batteries and for how long with labels for blackouts, undervoltage, Overvoltage and Electrical Noise.

Cons: Thought my battery was defective like many others when I first took it out and let it charge. See other thoughts.

Overall Review: Got the unit home, unpacked and plugged in to let it charge up. Unit was a good solid weight, which more than likely means quality components. After plugging my PC into the unit, fired up my PC and downloaded the newest version of PowerChute. Everything installed good and indicators looked like they should. However, in the powerchute software, there is an option to run a self test on the unit. First time I ran the self test, the battery drained from 100% to almost nothing in a matter of seconds. Test came back as failed and warning popped up that the battery needed replaced or the unit needed replaced. I thought that was strange considering the display indicators were showing that I was only using about 275-300 watts of power and this thing was rated at 865 watts. Ran multiple tests again, all failed. Contacted APC tech support and they tried to tell me the unit wasn't powerful enough to handle my system, which was even more strange considering I had nothing else but my desktop plugged in and the battery indicators kept saying less than 1 minute run time on batteries, even on 100% charge. I was about ready to return it to the store when I made a discovery doing some google searching about all the problems people were having like this. When you first purchase the unit, if you look in the box there should be a slip of paper labeled quality assurance test. If you look at the top where it says date, thats when they ran the last self test and that self test info apparently is stored in the units internal memory. Mine said 6/9/2012. Now, in the powerchute software, there is a tab called "Run Self-test" located under MONITOR SYSTEM. Go there and in that tab there's a button called Replace Battery Date. Click on that and it asks if you want to confirm. You need to confirm and then it will update the backups unit as if you just replaced the battery. Once I did that, the display on the unit showed almost 48 minutes run time and every self test actually passed with flying colors. Also, the battery did not drain even nearly as fast. I even confirmed by plugging in all my devices and cut off the wall power and it still showed about 45 minutes run time on batteries even for several minutes unplugged. What my APC unit is powering on the battery backup outlets - AMD FX 8120 3.1 Ghz (3.4 Ghz turbo) Not overclocked 32GB RAM ATI FirePro V4800 Corsair CX430 PSU ASUS Sabertooth 990FX Mobo 2 Internal Drives 4 Case Fans 1x ARRIS TG862 Cable Modem 1x Linksys WRT54G Wireless Router Unit reports 48 minutes run time on batteries on a 13% Load and 100% battery charge. Of course battery time goes down a little on higher loads, obviously, but even under full use of my PC which draws larger power still gives me around 25-30 minutes run time. Really kind of makes me wonder why APC don't make this more obvious, which even the tech guy at APC didn't even mention this.

Pros: Easy to use, quietly does its job. Graphic display is a nice feature. I have a pair of these protecting two circuits in server cabinets; I am going to buy two more to extend the time. For server use, these mostly serve to bridge any brief power outages PG&E has. This protects the servers from hard power cycles, etc.

Cons: Have to cover up half of the outlets so the unwary don't think they are on a UPS and are not. I get around that problem by connecting a UPS-protected outlet to a server-quality power strip and plug the servers into that. If these were shorter and longer, two could fit on their sides in about 4u; as it is they take 10u standing upright.

Pros: A great UPS. I have rarely had to kick it in, but I'm very glad to be able to have the power for a couple hours of phone and internet to fill in during a power failure. The clean power and auto-shutdown ability is also a plus for the computer i have hooked up to it (over usb, it also shows up like a battery for a laptop so it doesn't need drivers). I also haven't had to replace the battery yet after 3 years ... the included one seems to keep well.

Cons: None really. a big investment but it is an 865 watt ARV, multi device surge suppressor, peripheral switch, and Inverter with the battery included. What did you expect? Its actually not a bad deal for name brand protection.

Overall Review: I have this thing hidden in a cabinet along with the the rest of my network peripherals and it doesn't make a peep. I've connected a cordless phone system, modem, wireless router, NAS, "200 watt" system, 3 printers, and a lamp and this thing handles it all just fine. I will definitely be looking for the APC brand from now on.

Cons: Battery needs to be replaced after 3 months of use. It only had to switch to battery power once for about 5 minutes since I had it.

Pros: High amount of power means it keeps my small linux server and windows desktop running for about 40 minutes, and has power to spare for external storage drives, monitor, router, etc.

Cons: APC's software lacks the ability to do anything custom on power failure. There's open-source alternatives, but it'd be nice if their software was a little more flexible.

Overall Review: If you're only putting one machine on it and you don't need it to do anything past shutting down or hibernating your machine, their software works well enough, and again, it's got more than enough power for anything other than high-end gaming rigs.

Pros: Great Wattage / Outlets count for the price. Love the front LED display and the options it gives you to view.

Cons: Still a bulky UPS unit, but that is expected.

Overall Review: For the Wattage rating I'm not sure you will find a much more solid unit than this.

Pros: Powers my home server (dual-core system with 4 disk RAID5), modem, router, switch for about a hour after power failure.

Pros: I have a Phenom X6 desktop with 23" monitor, E4200n router, MacBookPro, Windows Home Server and a WD MyBookLive all attached. 865w available and only 95w used. This UPS has smoothed out the sometimes rough incoming voltage without noticeable variance. Very good investment!

Overall Review: Monitoring software (download from APC) is fantastic! The 10 outlets are a must for expansion.