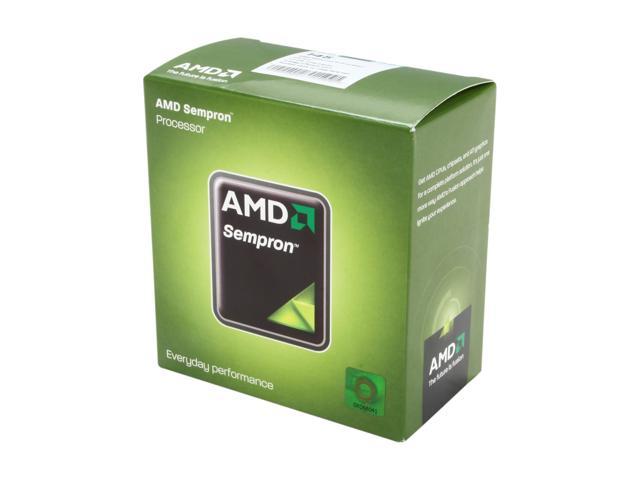 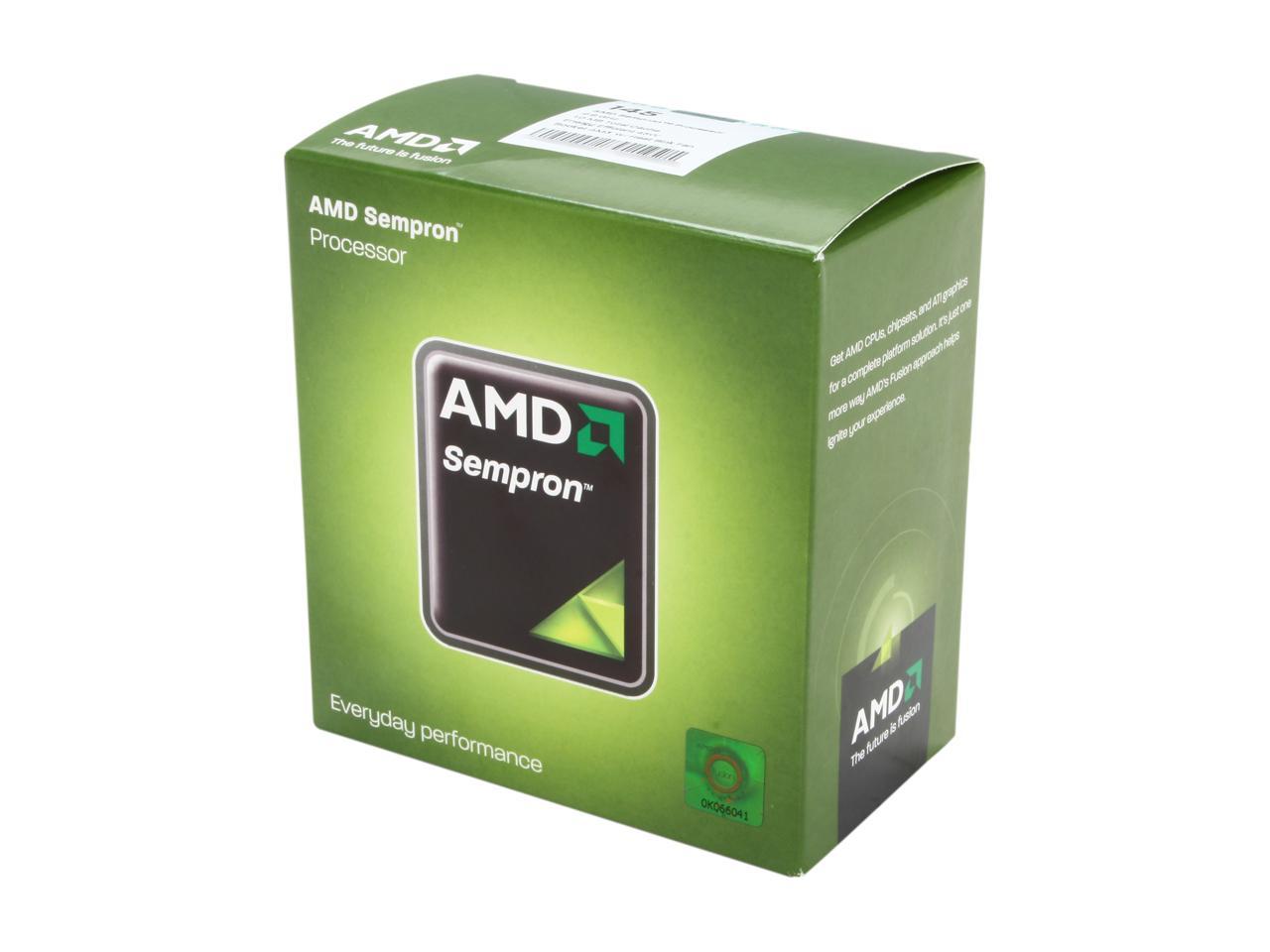 (243) Write a Review
OUT OF STOCK.
Fees for brokerage and duty included in price.
Overview
Specs
Reviews
AMD's Sempron 145 is a great choice for HTPCs and other applications where low noise and low heat are major factors. This would also be a great choice for remote systems used to control video walls. You could also use it for building a dedicated print server system.
This 2.8GHz processor only draws 45W of power and still has all the features that make AMD processors great. The integrated DDR2/DDR3 memory controller and HyperTransport Technology combine to enable your system to boot and load your applications quickly. It also comes with Cool'n'Quiet 3.0 technology to increase power efficiency even further.

Learn more about the Sempron 145

Pros: I was pleasantly surprised by the efficiency of this chip. Low power does not mean low performance. In using this CPU for a test system, it carried out each task I asked it to without complaint. Because of the low power drawn I never saw the core temperature go above 114*F after a 4 hour stress test using benchmarking software. Normal idle for me was around 85-90*F depending on the ambient room temp. The included heatsink/fan is very short and would work well in a smaller enclosure. I never noticed an increase in audible volume from the fan when testing either.

Cons: When using very CPU intensive tasks, the single core shows its only real weakness by not being able to multi-task which results in the system bogging down. I was able to play a 1080P .mkv file without stuttering, however the CPU load yo-yo'd from 85-100% so don't expect to watch an HD movie and use photoshop at the same time.

Overall Review: Although the motherboard I was using supported core unlocking, I was unfortunately not able to unlock the second core. This CPU would make for a fantastic HTPC because of the low power/heat and relative quietness or a DIY NAS box. I can also recommend it as a basic web browsing, word processing machine, however if you are looking to play current generation games at 1080P or need to edit videos/photos I would encourage you to look a basic dual or quad core instead. I would not recommend attempting an overclock using the stock heatsink/fan.

2 out of 2 people found this review helpful. Did you?
Vincent C.
Ownership: 1 day to 1 week

Pros: extremely cheap, easy to setup. runs very cool. Apparently has an unlockable core, but I haven't tried it.

Overall Review: as ridiculously cool as this thing runs, the stock heatsink practically doesn't exist. it's about 1" tall, fan included. Great for an htpc or very small pc's in general, but I like a little meat on my heatsinks so I can play with them.

1 out of 1 people found this review helpful. Did you?
Robert K.
Ownership: 1 week to 1 month

Pros: I purchased this for use in a client's unRAID server build. I didn't need anything fancy and just wanted something cheap since it's just for media storage and streaming. It runs very cool and doesn't use a lot of power, which is something I was looking for since the server will be powered on 24/7.

Did you find this review helpful?
Christopher M.
Ownership: less than 1 day

Overall Review: August 2009: AMD's recently announced Sempron 140 single-core processor can be transformed into a dual-core Athlon II X2 series processor with a simple, well-known trick. This comes as no surprise, as the "Sargas" core the processor is based on, is made by disabling one core on the Regor dual-core die. The trick requires a motherboard with AMD SB710 or SB750 southbridge that supports the Advanced Clock Calibration feature. Not all motherboards, however, support this mod. By simply enabling the feature in the BIOS setup program, the system will be able to address both processor cores, with the complete feature-set of Athlon II X2. The staff behind the feat over at Thai techsite VModTech tested for the unlocked core's stability with much success. At 3.71 GHz (13.5 x 275 MHz @ 1.536 V), the processor stood SuperPi, WPrime, and WinRAR bandwidth tests. At around $40, here's the cheapest ticket to a dual-core processor that looks $80 X2 dual core processors in the eye

Pros: This processor was released in September and I got it in October. I was a bit leery to buy it since it only had 6 reviews at the time and none of them stated its unlocking or clock potential. I've been running it dual-core ever since. Around the turn of the year I decided to clock it up a bit. I clocked my RAM back to 800 from 1066 and then proceeded to push the FSB up until I got the RAM back to 1064 (putting the processor at 3.72. Also make sure to turn your northbridge back down too). It ran stable for a week and it has been folding the whole time (see: folding.stanford.edu). It crashed when I tried to do some multi-tasking on it. Did a hard reboot and pushed the voltage to 3.75 and now it doesn't have any further issues; however, I don't think I'll push it any harder. Leaving it stock single core at stock speeds. It is still the best processor for its value. Sure you could get a six core but you would spend 6 times as much and this works just as hard. 3 year warranty. Awesome

Cons: the other company(s) still exist(s)...oh well, got to have competition to keep prices down : D Use of a non-stock heat sink will void your warranty and they have a list of thermal interface material that they approve. If you use one that they don't recommend, it voids your warranty. (funny, they didn't say anything about overclock voiding the warranty). Approved thermal grease list is found near the bottom of this page: http://support.amd.com/us/kbarticles/Pages/CPU7-HSFRemovalInstructions.aspx

Overall Review: The heat sink IS really small, but that's not a con since the processor runs at 45W maximum. It will easily fit in the most slim case I've seen because it rises just above the RAM. (I don't use it, I put the stock AMD heat sink for a 125W phenom x4 with copper heat pipes. I use this because I have it and know it will cool better). I also used some Arctic Silver 5. FYI, the stock heat sink is only three-quarters of an inch tall with fan on top of it. All-in-all its only an inch and a half tall. Better measure twice to make sure it'll fit (sarcasm). I also have a Phenom II x4 945 95W. Unless I'm gaming, I don't notice the difference between these two processors. If you're not going to game, get this, it will satisfy your expectations and then some. I heart Advanced Micro Devices. Been using them since the K6.

Overall Review: I have bought 4 now and all are still going strong as Ath II 4550e's. Just make sure that the mobo has unlocking and all set. Asus M488T-M, M487TD-EVO, M5A97 EVO, and this one is going in an Asus M4N68T-M for a nephew. Pairing these with 4gb of DDR3 and an HD 6770 makes a value gamer or HTPC nicely, no matter what others may say. They have all performed admirably albeit not an FX but hey for 32 bucks who cares?

Pros: Using this sempron as a filler until I decide on something better. I may wait for Piledriver; I need to see what comes out this Spring. Absolutely thrilled with the fact that I got a competent cpu w/ heatsink fan for $40. Haven't tried gaming or anything really intense with it. It works very well for daily computing (web, itunes, excel, photos etc). AMD always provides a value, and that is why I am a customer for life.

Cons: Unstable 2nd core (which my Asus m5a88-v evo unlocked easily). It's really the luck of the draw and you can't deduce eggs because your cpu doesn't do things it's not advertised as doing. My copy does not take kindly to much overclocking, although i'm sure someone with more experience than me could probably get it to work. I just get the feeling my specific cpu isn't one for unlock or overclock... but that is completely fine as it's not my main concern. FYI it seems that most people can overclock these very easily; mine is the exception to the rule.

Overall Review: Perfect for a kid's xmas gift that I couldn't really afford to build. Spent the extra money on a Biostar 880G mobo. Been running cool and solid with second core unlocked for two full days of gaming and videos by an 11 yr. old.