OUT OF STOCK
Sold by: Newegg
Shipped by Newegg
This item is currently out of stock and it may or may not be restocked.
Out of Stock
Add To ListFound on 1 wish list 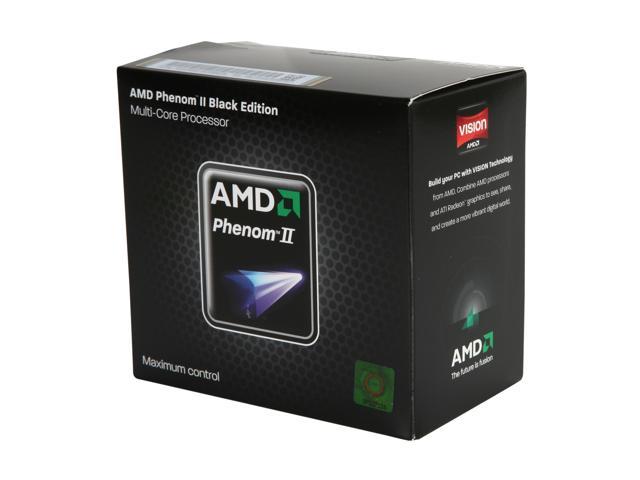 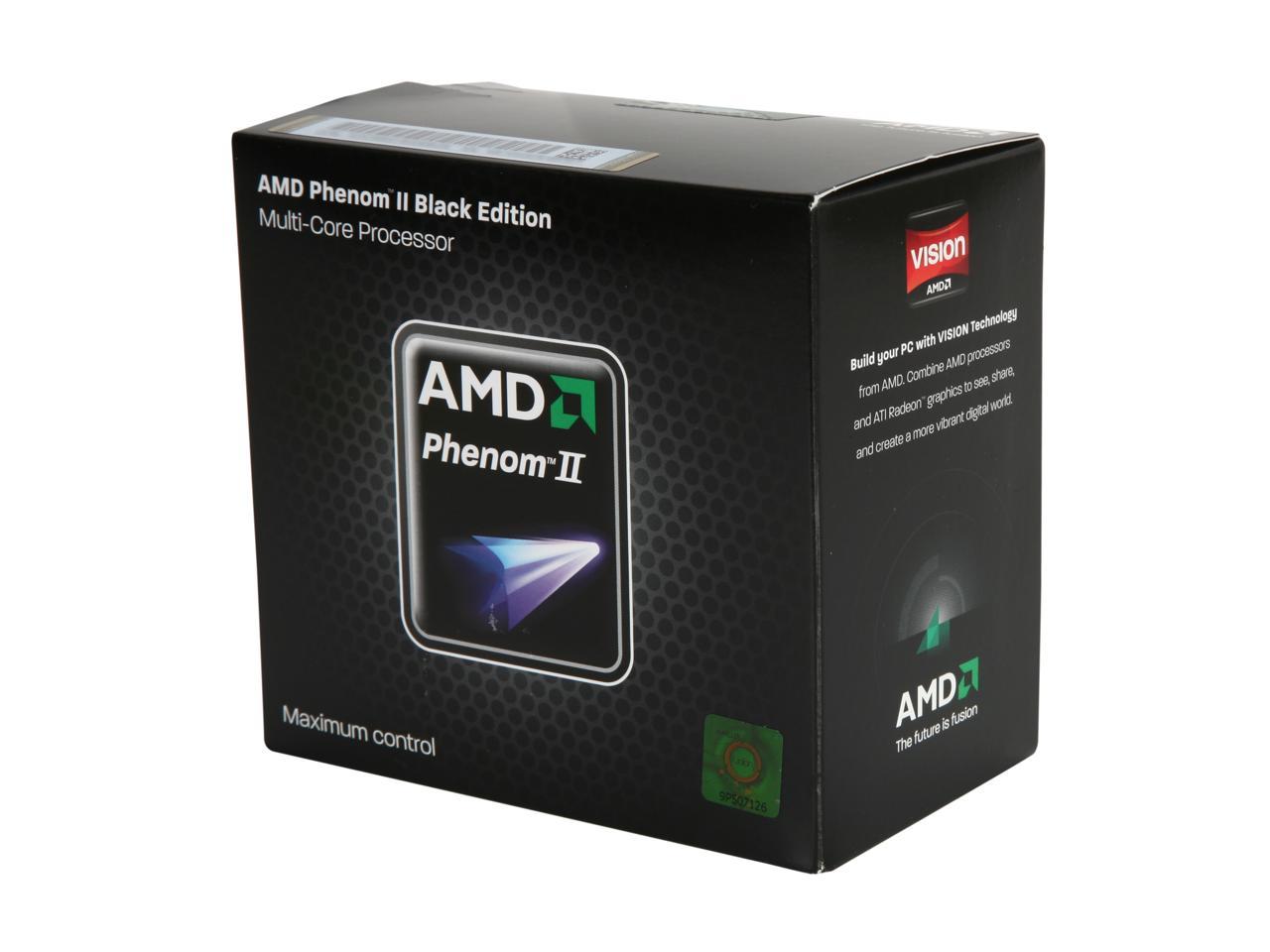 (1,587) Write a Review
OUT OF STOCK.
Fees for brokerage and duty included in price.
Overview
Specs
Reviews
Experience a new world of quad-core computing with the AMD Phenom II X4 955. Every aspect of this processor was designed with speed and energy efficiency in mind. AMD64 with Direct Connect Architecture and 45nm technology has created a tuned processing pipeline that helps keep your system performing at the highest levels. HyperTransport Technology provides up to 16.0GB/s bandwidth to reduce system bottlenecks and AMD Balanced Smart Cache ensures quick access times to highly used data.
Energy efficiency is important to AMD, allowing you to enjoy a cool, quiet PC while saving energy and reducing heat, noise and the effect of your computer on the environment. Energy efficiency innovations include Cool’n’Quiet and AMD CoolCore. These technologies reduce power consumption and processor activity.
AMD Phenom II processors also offer support for Virtualization Technology. You can run virtual environments on one system with ease, allowing you to use legacy programs on a separate operating system. Add the convenience and power of multi-core processing and enjoy the benefits of energy efficiency with an AMD Phenom II X4 955 today!

Marcus A.
Ownership: 1 week to 1 month

Cons: Retail fan is load. I started to RMA it, but did not want to unistall the CPU. Used Newegg's live chat and Vanna said that if I did not want to RMA the whole thing I could call AMD for a fan replacement. Called AMD at 408-749-3060. I was told that they have had occurances of people calling about load fans. Told the fans run off of magnets and sometime get out of allignment during shipping. Told to turn off the comp, and firmly push the fan in toward the CPU. That did the trick. The fan is minimal volume at high speeds. Hope this helps.

Pros: C3 Stepping! Fast Proc, Big upgrade from 7750BE @ 3.0ghz I noticed it immediately. Overclocked to 3.8ghz on only 1.425v stable 24 hour test in prime95! All that power, and guess what, I am only using the stock hsf *lapped* Any game runs amazingly smooth! I get 9.3 MTrips/s in Tripcode Explorer, Win 7 is very quick now, Games are about 30-120fps faster depending on what I am running. (Counter Strike Source - Borderlands) Temps Stock no Cool and Quiet: 30c-55c Temps OC to 3.8ghz on stock fan: 42c-61c If your an serious overclocker, buy this chip, no need for X965BE if you want to have more than 4.0ghz buy a decent after market air cooler

Cons: I shouldn't have had to lap my hsf to make it flat, but thats to be expected with any Stock HSF.

Pros: Worth the extra few dollars to go from an IBox to an MBox (Model#). You can definately feel and see the performance you get with this quadcore. I have always been a huge fan of AMD. They take time to get things right and don't necessarily push items onto the market that aren't properly tested like some companies do. If you have a Mobo that lets you see how many processors are being used at a time its really nice to see it drop to one surfing the Internet and then ramp upto 3/4 when playing WOW, Tropico3 or whatever. Seems to handle whatever you throw at it with no sign of stumbling at all. Also if you can get this processor w/a combo deal it can actually be cheaper than the Ibox version and end up saving you money.

Cons: Was not expecting a great Heatsink with the processor but it is nice. And with an open case it looks very cool w/pipes running along the outside of it. Downside though if you are using all 4 processors and the Fan kicks on high it is quite noisy. If it is just running 1/2 processors it is not even noticeable. Worth picking up a 30$ extra heatsink if you like your comp to be quiet.

Overall Review: To help anyone that is new to building a computer; The processor has a little arrow in one corner of it. This must line up with the arrow on the mobo otherwise it will not go in. It should fall into place without needing force. Don't ruin a great processor before you get to use it :)

Cons: Does not support 1600 speed memory at stock speeds. I know that this is the case with most PhenomII but It should be advertised in the details list at least.

Overall Review: I had to downclock my memory from 1600 to 1333 to get this build to run properly. I just wish I had known about this before I bought this processor. maybe this reviwe will help future buyers.

Cons: Didn't cook me breakfast (but I'm sure it'll get hot enough, lol)..

Overall Review: This review is pretty much the about the overclocking potential. I'm a noob at OCing, so I used the AMD OverDrive utility that is downloadable from the site (I think it came with the software CD as well, but I don't have access to it right now, so I can't say for sure). After using AMD OverDrive's "Auto Clock" function, the highest stable setting has my system running at 3895 Mhz. My motherboard is the ASUS M4A79XTD EVO, and I'm using a ZALMAN CNPS9700 CPU Fan that's connected to a Scythe KM02-BK Fan Controller. I also have an Antec 902 case with two additional 120mm fans, so I get awesome airflow. My point is, this 3.2GHz processor is scratching at the ceiling of 4.0 GHz, and that's with automatic clocking. The settings disappear after a reboot, but can be reapplied by AMD OverDrive after loading the computer back up. What I did was to document what Auto Clock tuned my PC to, then I went into my BIOS and manually put in the same settings.

Cons: Stock fan is pretty loud, but it does the job. Gonna get a different one though as it's a bit annoying unless wearing headphones to block out the noise.

Overall Review: Great for the price, would buy again in a heartbeat, no questions asked.

Pros: Quick! Finding all these cool animations that Photoshop CS5 hid until you had enough power! Went from a Opteron 165 to this bad boy. Bought this as part of a rebuild for my girlfriends computer, who uses it for photo retouching (and too much FarmVille). Also part of the upgrade was 2x4GB OCZ Reaper HPC DDR3 1066, Asus M4A79XTD EVO, and a Thermaltake 500W PSU.

Cons: Had some problems with bluescreens -- Everything put together wonderfully, and started installing Windows 7 when I got a bluescreen half way through. Tried again, and same thing, but at a different place during install. 3rd time was the trick, but was having all sorts of problems and more bluescreens running updates and installing apps. After some digging I figure out the problem. Running 8GB of memory @ 1066 apparently is a little much for the processor to handle on stock voltages (remember, the memory controller is on the processor). So after giving the memory a little extra voltage, and the CPU-NB Link a few more mVs, everything is now working wonderfully. Sadly, it took me a good week testing parts to figure this out, so hopefully I will help someone with this review. I also understand my board could be to blame since it still has only a 4-pin aux plug, not the new 8-pin (was wondering why my new PSU had 2 - 4pin connectors)

Overall Review: Might have been a luck of the draw thing that I got a CPU that couldnt quite handle running all that RAM, but at least its possible to give it a little more juice to cope Also, as you probably have read on other reviews, the stock cooler can get quite loud, especially above 4500RPM. It works, however. I can set how sensitive the fan is given the CPU temperature on my Asus board, so I can trade off noise for heat a little. Might have to look into a aftermarket cooler. As always, Newegg rocks with the quick shipping and great prices!!