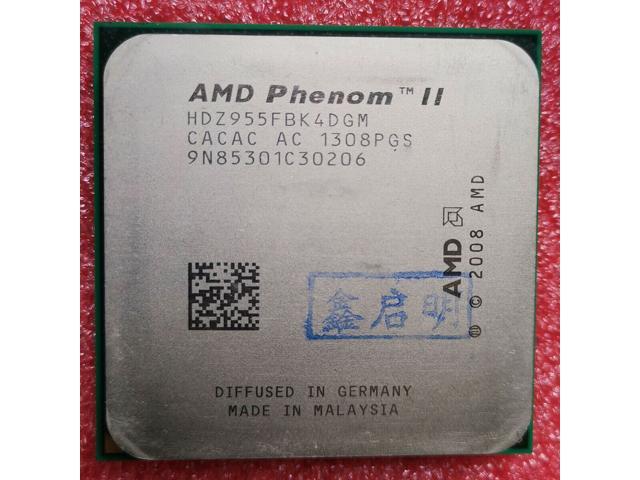 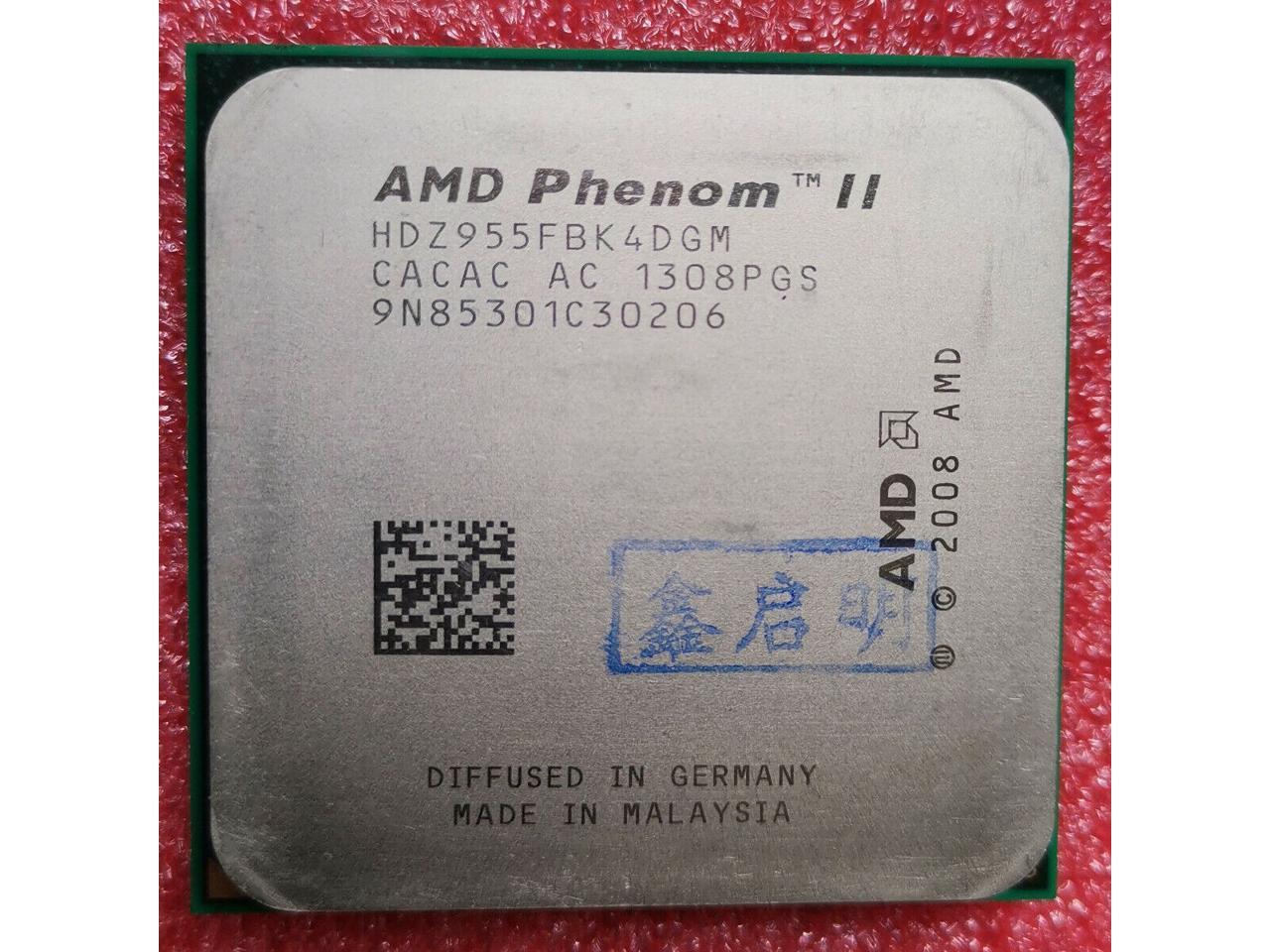 (1,296) Write a Review
See more "am3 cpu"
OUT OF STOCK.
Fees for brokerage and duty included in price.
Overview
Specs
Reviews
Like the superheroes of old, the AMD Phenom II X4 955 streaks out of the night to lay waste to your enemies with four 3.2GHz cores that have dedicated L1 and L2 caches for each , and 6MB of shared L3 cache to handle really heavy loads or large data sets.
Memory transfers get faster than ever. HyperTransport Generation 3.0 mode allows up to 16.0GB/s of bandwidth. Up to 17.1GB/s memory bandwidth for DDR2 and up to 21GB/s memory bandwidth for DDR3 memory controller delivers an amazing total of 37GB/s of processor-to-system bandwidth. This unprecedented bandwidth is needed to feed the data hungry AMD64 with Direct Connect Architecture cores.
You'd think that all of this power would be too hot to handle. Think again. AMD's Cool'n'Quiet 3.0 works with CoolCore Technology to minimize heat while keeping power and efficiency up. Now the cores can shut down unused parts of the processor when not in use. This saves power and helps to reduce the amount of heat generated. This function is built in so there's no need for drivers or BIOS updates.

Cons: With the great overclock potential it seems a waste to not have an agressive cooling solution.

Pros: Fast, awesome upgrade from AMD 6000+ dual core. Everything loaded fast after BIOS update(see below). Great overclocking options though I haven't had the chance to put it through the paces yet. Most of my builds have been AMD nice price/power ratio.

Cons: With the M4A78T-E needed to update to Flash the Bios to get it boot, but that's a MB issue not processor.

Overall Review: Can't wait to really see what this can do. What I have seen so far.... it's been sick.

Cons: I had issues with my motherboard BIOS. I thought it was the CPU at first that was running at 800 Mhz. The BIOS was the culprit. I hope other people upgrade their BIOS prior to RMA. I almost did.

Overall Review: This is a great CPU for the price and no issues overclocking to 3.7Ghz on stock cooler fan. I think it could do much more but I must purchase a new mobo and RAM. The packaging is always way better than intels. I recommend this CPU for gamers. You can purchase 4 of these for the price of 1 Extreme....GO figure.

Pros: amazingly fast cheap price if your thinking of buying this is recommend

Cons: most motherboards arent up to date to recognize this usually post it as a 800 or 1.6 just get the latest bios and pewpew

Pros: - Fantastic Architecture. - Made by AMD. - Overclock was cake.

Cons: - Broke my heart to switch from being an intel boy to an AMD boy...but i've recovered and am loving it. - Doesn't talk to me. - Won't make ice. - I think it may give me the middle finger when i sleep...

Overall Review: Unbelievable cpu. Choosing an i7 over this is a waste. The price/performance ratio doesn't add up (taking into account the price of a decent i7 compatible motherboard). Combine this with the asus crosshair iii and overclocking was child's play. It took all of about thirty minutes to get a stable clock of 3.85. I ran 95prime for 2.5 hours (high heat test), completely stable without a hiccup (want to run it longer but get on my computer too much to wait that long). Heat peeked at 62C. Setup: AMD 955 be @ 3.85 Asus crosshair formula iii G. Skill DDR3 1333 Cooler master v8 Antec 1200 Radeon 5870 (Will crossfire soon)

Pros: this thing is fast! I don't even think it's full potential has been unleashed yet as most BIOS updates were just rushed out to ensure compatibility. it makes Windows 7 snappy and sharp. I even transferred my old and dying XP installation and it has new life -- I can play large high def movies through my network without a hiccup now. I'm upgrading from an AthlonXP 2500+ so yeah this is a huge difference for me.

Cons: no multi-threading I guess... recently AMD has been playing catch-up with that other processor company that shall go unnamed. and the sad thing is that other company's best ideas started over at AMD. it's time to turn the tables, I want to see a processor that has a quad channel memory controller, with 2 or 3 threads per core and 12mb of cache running at 4.0ghz stock. if AMD got something like that out within the next 12 months... it would crush the i7 and send it home to mama

Overall Review: the people who had trouble with this processor should do some research. its most likely a BIOS upgrade you need to get all 4 cores recognized and running at the correct speed. good luck!

Pros: I ran this CPU for almost 4 straight years 24/7 365. It was overclocked to 3.9 GHZ. and ran without one problem. At the time, this CPU was one of the best out in the market. Still a viable chip even though it is out of production. It is one classic CPU that still holds its own in the marketplace. AMD gave the computing world a great CPU in the 955.

Cons: No longer being produced. Can be purchased used and sometimes new. Prices have risen due to demand and it being out of production. I've seen prices in the 175 to 200 range for new as of 4/12.

Overall Review: I recently sold my 955 to upgrade. It sold for just a few dollars less than what I paid for it new. People know the value of the AMD 955 and is a cpu that is still in demand.

Pros: Purchased a few months back. Built a new rig around this, and haven't looked back. I have had no issues whatsoever with the build. I seriously was waiting for something to pop up, and it didn't. I have run a stable OC of 3.8 Ghz on air but settled for 3.6 for an everyday OC. AMD Dragon platform is fast. If you are thinking about buying this or the Intel, I really think that you need to understand that synthetic benchmarks don't get the whole picture. Synthetics rarely catch that in the real world you are surfing the net, while playing WOW, and editing pictures of your weekend. I do a lot of photo editing and some light gaming. WOW runs fully maxed on 1680x1050 at 60FPS, and photoshop is snappy (at the same time.) Might that filter be applied in photoshop 3 seconds faster on an i7? Probably. But the other 23 hours 59 minutes and 57 seconds in the day the difference in speed is unnoticable. I have compared :)

Cons: Core i7 are faster. Not going to lie to myself. My checkbook likes this chip better ;)