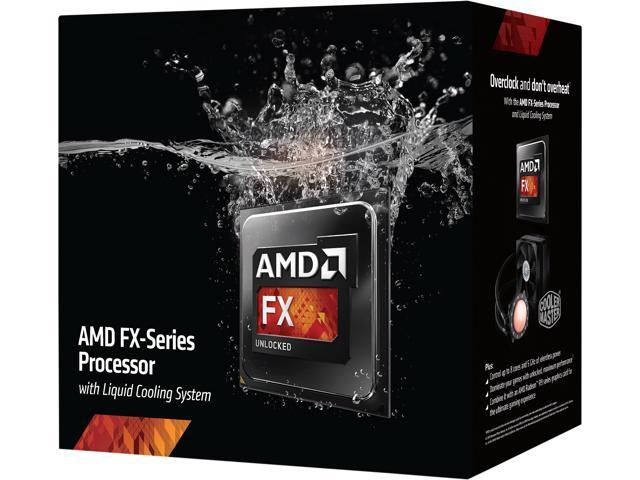 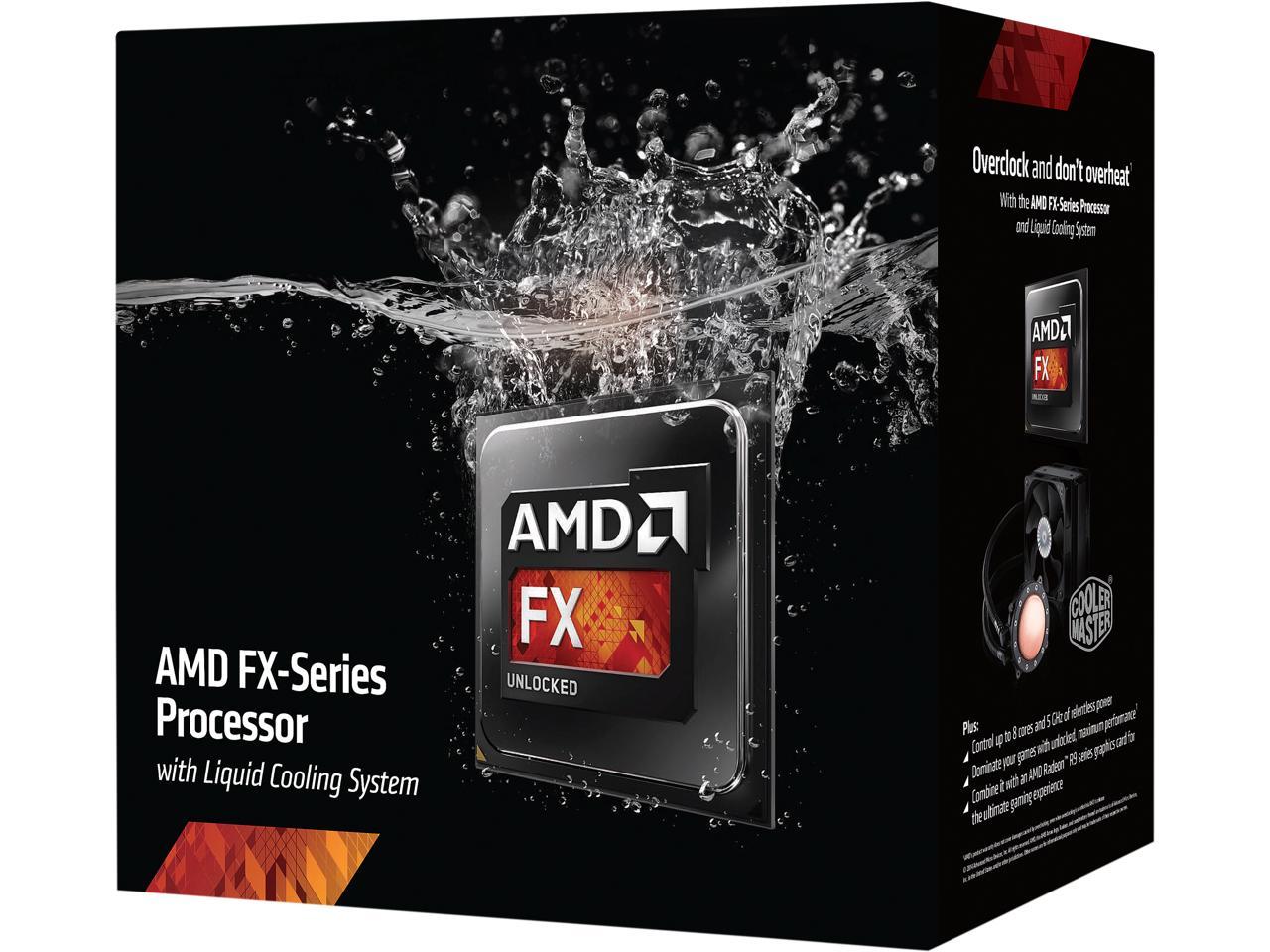 (85) Write a Review
OUT OF STOCK.
Fees for brokerage and duty included in price.
Overview
Specs
Reviews

This CPU is only compatible with the selected 990FX motherboards.

*AMD’s product warranty does not cover damage caused by overclocking (even when overclocking is enabled via AMD OverDrive software).

Pros: Fast processor Comes with a liquid cooling solution made by Asetek (is the same as the Antec H2O 920 with an AMD label on it). Chill control V is an awesome app to control your cooling system or create custom profiles for over-clocking. Scored a Passmark rating of 10,849 which is about 1500 marks higher than what my FX-8350 did. Keep in mind these are auto-clock settings using my Fatal1ty. To give you an idea, I gained about 2000 more marks when I upgraded to the FX-8350 from the FX-8150 so you can see there are gains to be made by using this processor. Was able to overclock to 5.4ghz at 1.59v and still get to a desktop. Very light web browsing was possible but that's about it or the system would lock up. Temps never went above 38 °C so I know heat wasn't the issue.

Cons: Not much room for overclocking from it's default clock when compared to the FX-8350. 5.1ghz was as high as I could get a stable Passmark run at 1.4625v. Any voltage higher or lower would lock up the system but I managed several runs while scoring 11,700. Unfortunately, 3Dmark would crash about half way through at this setting but I found 5.0ghz at 1.45v to be the sweet spot. In comparison, 3Dmark would crash with the 8350 at 5ghz so there is some obvious optimizations done with this processor. My highest PassMark bench with the FX-8350 was 11,500 while my highest run with the FX-9590 was 11,700. As an overclocker, what you can get away with and what is actually useable are two different things.

Overall Review: AMD has made some improvements. While this may not be the overclocker of the year, it's noticeably faster than the 8350 in it's default state. It doesn't run any hotter than my 8350 did which for me with a closed loop is quite cool. My twin GTX-680's create way more heat than this does and they feel much more alive in SLI now when compared to the 8350 as well. The 220w TDP may seem high but in reality this processor is a great performer when you have your power saving features enabled. To score almost 11,000 Pass Marks is quite impressive in this state. It doesn't pull any more than my FX-8350 unless I'm running Prime to stress it out. I thought this processor was going to be power hungry 24/7 but it really isn't. I have yet to do anything that has made the cooling fans run faster than the default values of the Chill Control V software so it's clear that this processor is the best of the best in this series. I bought this from Newegg but it was from a well known auction website that rhymes with e-today. Apparently I cannot mention this website while leaving a review even though Newegg still get's my business and they could quickly verify the transaction. To be honest I was about to switch to Intel when the initial cost for this processor was over $800. I thought AMD lost their mind and was very disappointed. I waited patiently until I happened to be browsing that auction website and saw Newegg had it with the cooling solution for $389. I thought it was a mistake so I bought it immediately. I have no regrets. This is likely the last AM3+ processor so may as well have the flagship to get me by for another year or so. Thank you Newegg :)

Pros: okay when I first load it up the CPU. the install was super easy. the provided liquid cooler works excellent. I installed in with my render farm with the lot of other Andy and Intel CPUs. what I noticed was in light task the Intel seem to be slightly faster. but then when I started really creating heavier renderings the AMD turned out twice as fast. not only did it start catching up and working better if I was still able to do task on that machine where the intel machine was completely locked out. so it appears softwares becoming better at multitasking.

Cons: needs a very strong power supply. needs to be matched with quality components in order to achieve the best performance

Overall Review: I do believe that the AMD CPUs are ahead of its time and software is not keeping up with the true multitasking needs.. I think one software starts truly using all the threads we will really see the benefit of what AMD dead by building separate CPUs instead of hyper threading.

Cons: -Price -The water block/pump is a nightmare and a half -Poor assembly instructions for the cooling loop -VERY bulky radiator and fan combo -Cable management possible but looks sloppy with a central point on the board with wires coming out.

Overall Review: I love the Vishera. It is a great chip. The only thing that I have to say about this particular product (not the chip itself) is the pump was a bear to assmble. The instructions for this cooling system are pictures with written portions so dumbed down that a 5th grader can understand it. However, the wording is exceedingly vague and the component list fails to mention the two pieces of plastic that fit on either side of the retention ring and hold the screw tight to the assembly. Now I'm sure that this oversight was seen as "well they're building their own computer, they can figure this out." WRONG. This was my first exposure to water cooling. A complete component list and DETAILED instructions, not vaguely worded one liners and single picture per stage ones would have made this go a lot faster in the assembly stage. Let me save the next buyer some head ache; You see those two plastic oval pieces? The one with a claw looking portion goes on the bottom of the retention ring. The thinner one with a clip goes over it and through it into the bottom plastic clip. THEN and only THEN do you push the screw through it when it tells you to prep the rentention ring. If you are like me and triied to figure out its use by seeing if the screw fits in it... Well then take it back out and follow the above steps for that particular portion of the instructions. It took me thirty minutes to get the screw undone from the plastic piece and then into its correct configuration. Hopefully, my above experience can save you the hassle. Over all... I would say that I am middling to highly satisfied with the product as a whole and I would recommend this to serious pc enthusiasts.

Cons: Installed the product into an ASUS mobo using a EVGA 850W gold PSU running Windows 7 SP1. The computer was randomly hanging when I would do something process intensive. I thought it was a GPU issue because this was often during game play. After performing several diagnostics and reviewing syslogs, I narrowed it down to the CPU. I read the reviews to stay away from this CPU but thought that it couldn't happen to me.

Overall Review: I am currently working with AMD to replace it through the warranty. I want to believe this processor is just as good as the Phenom series I had for years before I upgraded to the FX. I will re-submit a review based on AMD's warranty service.

Pros: loved the way the liquid cooling was put together. went together faster than my last build

Cons: none so far works great

Pros: So I decided to go all out. What a great decision!! The 9590 is performing incredibly. Started to play with OC a little and pulled it to 6.0 Ghz without a hitch!! All bench tests are through the roof!

Pros: Lightning fast speeds and stable with the cooler it comes with.

Cons: The cooler itself is very difficult to install due to the way the screws go into the bracket.

Overall Review: While I was looking at purchasing this processor and cooler the TDP came into account so many times I thought I might have a serious problem, with the cooler it comes with and a decent case it is extremely stable and very cool.

Pros: This thing is powerful, Multi-tasking is a breeze and the chip doesn't even care. My liquid cooler works great, not overly noisy and keeps the processor under 40 degrees (C) unless under super heavy load and even then it's only ever peaked at around 51. That being said, this does run very warm considering those temps are with liquid cooling. I've not tried a standard heatsink but I doubt it would perform very well.

Cons: My only true con to this CPU is the fact that I, like many others was experiencing hangups where the PC would just totally lock up and required a hard reset. After doing some digging I found that it was the CPU and motherboard interaction. The board I'm running is a Asus Crosshair V formula Z and in the BIOS are power saving settings that are enabled by default. While those settings were on, and the CPU had a spike in voltage the entire PC would freeze solid and require a hard reset. After disabling those power savers I've had absolutely zero issues what so ever with this CPU. Not really high tech stuff to do for someone who built their own PC, but anyone not familiar with navigating mobo bios might have issues with the CPU.

Overall Review: the C1, C6 states in the CPU settings are the ones I was referring to in cons. As with any type of water cooler, a large size case goes a long way when it comes to space management. The cooler it comes with is closed loop and not able to be opened. That's fine for me, it may turn others off as some folks like to change the coolant formula.