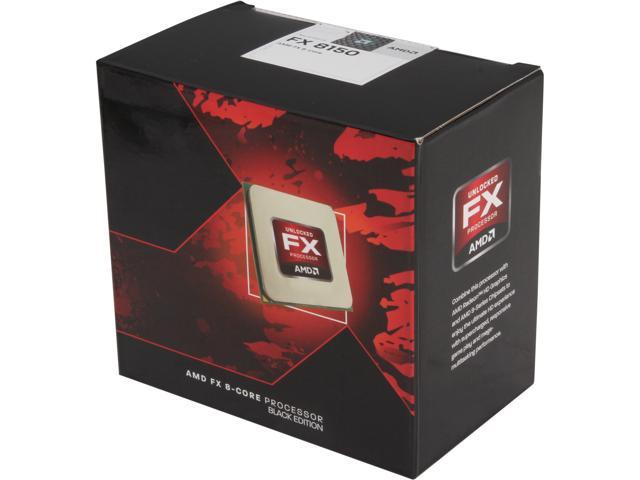 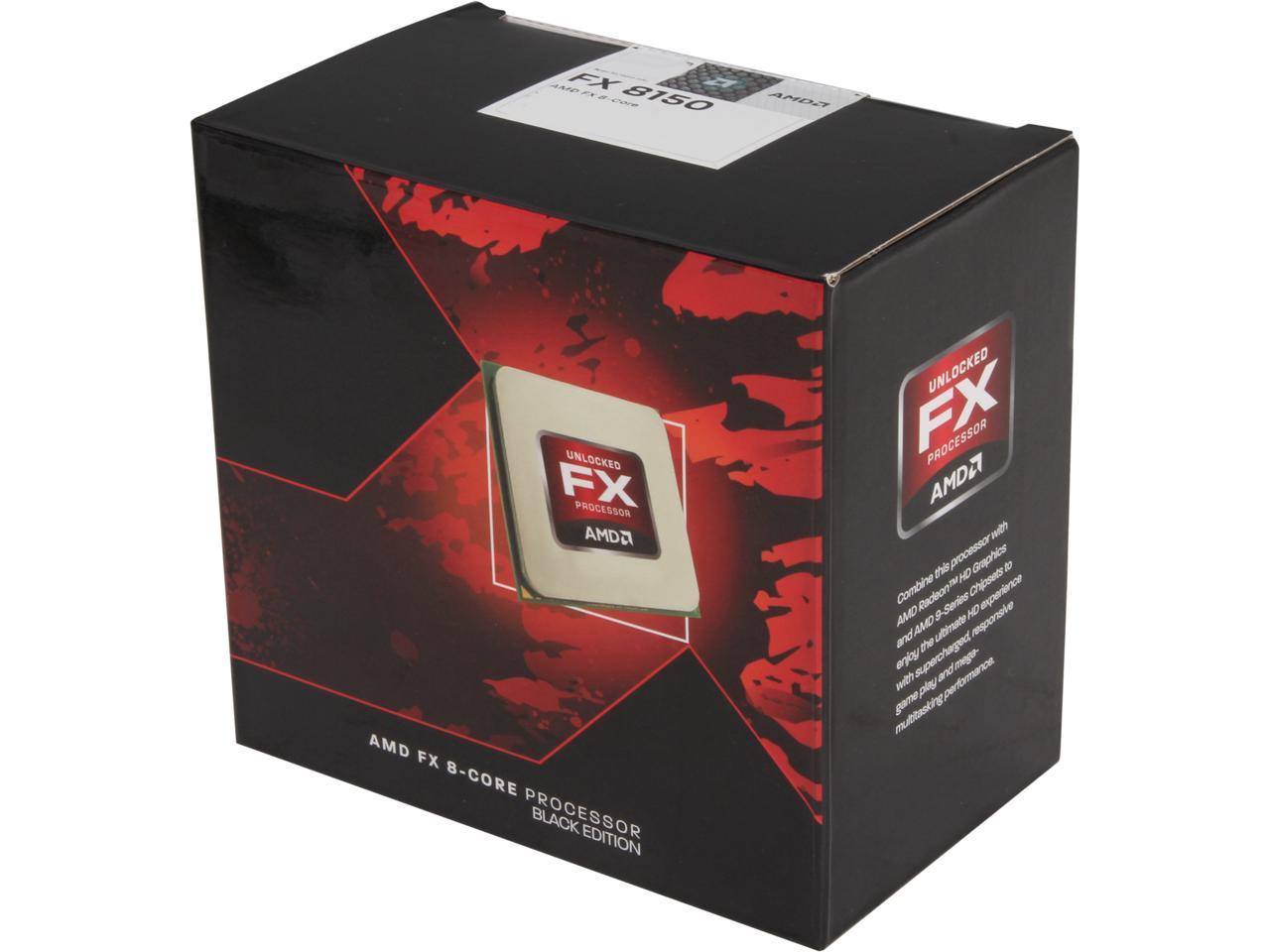 (766) Write a Review
OUT OF STOCK.
Fees for brokerage and duty included in price.
Overview
Specs
Reviews
Unlock and load. Blow away the competition with the unrestrained power of an AMD FX processor. Experience unmatched multitasking and pure core performance with the industry’s first 32nm 8-core desktop processor. Get the speed you crave with AMD Turbo CORE Technology to push your core frequencies to the limit when you need it most. Go beyond the limits of maximum speed with easy-to-use AMD OverDrive and AMD Catalyst Control Center software suites*. But the best part of all? You’ll get all this impressive performance at an unbelievable price. You’ll be asking yourself “what competition?” in no time.
Combine an AMD FX CPU with an AMD 9-series chipset motherboard and AMD Radeon HD 6000 series graphics cards to create the AMD “Scorpius” platform. Get lost in the action with ultra-responsive gameplay and insanely lifelike HD powered by VISION FX Technology from AMD. Overtake your rivals with the raw power and superior performance of an unlocked CPU*. Immerse yourself in an accelerated HD experience with AMD Radeon GPU and Microsoft DirectX 11 capable graphics. *Note: AMD’s product warranty does not cover damage caused by overclocking (even when overclocking is enabled via AMD Overdrive software).

Milton B.
Ownership: more than 1 year

Pros: So many things make me glad that I bought this processor. It has consistently run everything I've thrown at it, smoothly and even without overclocking. It's a multitaskers dream. It can handle everything. If you're looking for a CPU and one fast results for video crunching or multitasking this CPU is a great choice. I am running a three screen eyefinity arrangement and multitasking with no problems. 8 cores might seem like overkill, but using AMD System Monitor I have noticed all 8 cores in operation. This is great choice CPU. It comes with a very good stock fan. Turbo core technology is a great boost when needed, like in gaming. Integrated dram controller is an awesome improvement.

Cons: This is not really a con because I tried the stock fan and it did a good job. But if you know that you're going to be doing heavy gaming, video crunching or demanding multi-tasking, I recommend a better air or water cooling system. But that would be with any processor.

Overall Review: With a good cooler I have been able to overclock this to 4.2 GHz and run stable, but there's almost no need to overclock the CPU. Even overclocked the temperatures stay good. I have obtained 4.6 GHz also. This is a follow-up review now that I have owned the CPU for just over a year. This is in my main CPU that I multitask on daily. I love the CPU when gaming my FPS is always awesome. Because of the abilities of the CPU I run it near stock. Overclocking's an option, but the CPU is a beast, not even overclocked. So it doesn't matter if you're an overclocker like me or just an everyday user who wants a CPU that performs. Except for the few reviews with problems that could be user created, you'll notice that almost every review loves this CPU, and so do I. I'd recommend this CPU to anybody. It's a very good value and even better when you catch it on sale. I have considered moving up to the new Vishera CPUs but this one form so awesome. I decided to just stick with this one, because it really performs. I can have video going in one screen browser open in another, another browser open in another using three monitors at once with no problems. I think this CPU can run all the multitasking and monitors that you can hook up through today's GPU's. That's why I decided to write this follow-up review and give it five stars again. I wish I could give it six.

3 out of 3 people found this review helpful. Did you?
David M.
Ownership: 1 week to 1 month

Overall Review: Got this thing to post at 5.1 GHz but to get it stable you have to set the vCore to 1.45 which then it hits temps of 70c which is way to high under water cooling. I chickened out and brought it back down. What a beat though of a CPU!

2 out of 2 people found this review helpful. Did you?
joshua c.
Ownership: 1 week to 1 month

Pros: this thing is awesome i overclocked it to 4.6 stable on a asus crosshair v formula-z and a h80.....it made my gaming rig a beast

1 out of 1 people found this review helpful. Did you?
Craig B.
Ownership: 1 week to 1 month

Pros: Since it arrived, it has worked flawlessly. Overclocks like a dream. Serious bragging rights among the tech geeks at work. Sexy tin package. Noticed an improvement in FPS on a few games, (COD2MW/DEHR/Duke Nukem/SC2) etc... The game runs smoother, I can multitask even better than before.

Cons: Too many negative reviews out there. Software takes time to catch up to hardware - as such, people are whining about the bottlenecks the chip seemingly encounters on some benchmarks. Majority of benchmarks use 1-2 cores instead of the 8 this badboy has to offer.

Overall Review: Unless you own one of these, don't post a negative review to try and make AMD look bad. They've made a hell of a chip, and they deserve the credit for it.

Pros: Just in time for BF3. This CPU couldn't have had better timing. My old PC with an e8400 c2d cpu and 9600gt struggled with BF3. This PC was already built awaiting this am3+ socket but unfortunately the only CPU I had to put in it to install windows and make sure everything worked etc was a Sempron 140. The Sempron served its purpose to make sure the SLI setup, HD, ram etc all worked and to make sure I had the latest drivers pre-installed so when this thing showed up it was a 5 minute swap and I'm off to gaming. My WEI went from 4.6 to 7.9 with this CPU

Pros: 8 cores & far better than any CPU on the market >>FOR 8 THREAD CAPABLE APPS<<

Cons: None, people are stupid, they claim they have technical knowledge but they still dont even realize how stupid they are, for example if you think a 3.5ghz cpu with 16 or even 32 cores would make a difference in crysis or any game at all?? if yes then you have no technical knowledge of programs whatsoever, as far as i know no game on the market except a very use more than 4 cores so no many how more cores you add ONLY the ghz matters in gaming cause its unlikely that games companies will bother to do extra coding to add more thread support as standard anytime soon cause 90% of people have 2/4 cores, so for gaming even a dual core at 6ghz would run crysis 2 better than this and cost only 1/4 the price, BUT this cpu will insanely destroy intel i7 at multi instance multi threaded video conversion, i can convert 800gb of 1920x1080 fraps footage in no time with this CPU by running 2 instances of a 4-thread video converter which any other cpu could not possibly do, so people are the con.

Overall Review: And a side note a cpu wont help with FPS in games or non 8 thread programs at all anyway, what the heck is basing the capabilities on those for??? unless the game or program your running is using 100% power when running, upgrading your cpu will not improve performance in that app AT ALL, random performance tests on stupid things like photoshop or any game that will never max out any quad core cpu on the market yet today doesnt show anything related to the power of the CPU, if someone ran the same 2 instances of the video converter i did on an i7 theyd find the i7 would take 2x longer converting the video, why do they compare using programs that only use 2 or 4 threads? i dont know but its just stupid and an improper way to show off the performance potential, in the end if i remember right the i5/i7 does overclock higher and as such it will run dual/quad thread games better than this cpu anytime, but i5/i7 will flat out fail to compare in performance on programs that fully run 8 threads

8 out of 25 people found this review helpful. Did you?
Jesse B.
Ownership: 1 month to 1 year

Pros: Let me start off by saying this is a great processor. It handled everything I threw at it very well.

Cons: Sandy Bridge seems superior. My wife's i3 2100 out-performed this thing (with a much lower-end GPU I might add) on some games such as WoW and SC II.

Overall Review: Despite Sandy Bridge being the better solution (at least in my opinion) this is a great processor. And though it was out performed by a lower end processor in a few (very few) things, it still handled every game I threw at it with 50+ minimum FPS (paired with a HD 6950). Also, my wife's GPU is a GTS 450 in case anyone is wondering what it competed against. I do recommend this processor for some things (though gaming, I would certainly go Sandy Bridge), and think it has been given a very bad and underserved negative reputation in a lot of online communities.

4 out of 15 people found this review helpful. Did you?
R S.
Ownership: less than 1 day

Pros: ...it does have 8 integer cores

Cons: Those are not 8 independent cores. Don't fool yourself into thinking they work as well because they can't. The very nature of the Module design is stripping out resources that are not ALWAYS used. However, when you are benchmarking, gaming or doing some form of heavy computing, you DO need those resources that AMD has stripped out with this design. For example, having two 128-bit FPU's that can be combined a 256-bit may be more "efficient" when each core only needs 1 128-bit ore only 1 core is using the 256-bit. But when both cores need a 256-bit this is a huge bottle neck. You can try to argue the benefit of less round-off error when using 2 128-bits simultaneously but, if you're going for precision you want a 256-bit FPU. Simply put, when you don't need 8 integer cores this thing is great. So why does it have them?

Overall Review: Using numbers published on 3DxxMarkxx11.com the best Physics score I found for the FX-8150 was 8039 @ 4.85GHz. My i7-920 @ 3.8GHz scores 8403. So a CPU 3yrs old and clocked 21.6% lower scores 5% higher. (BTW the 920 cost me $280) You can find more evidence the module approach fails by looking at the increase in benchmark scores as the clock speed is increased. Obviously a perfect cpu's score will increase by the same % the clock is increased. However the FX-8150 does anything but this. My i7 scales by 98.5% when going from stock of 2.66 to my current clock of 3.8GHz. The fx-8150 scales at 87% going from 3.8GHz to 4.4 and a miserable 25% going from 4.4 to 4.8GHz (this was taken from a test I found online). So even though it clocks high, it does not lead to improved results due to the module approach. It does not help to increase the clock of the integer cores when they are being bottlenecked by the uncore parts of the cpu; you’re just wasting more clocks.

7 out of 43 people found this review helpful. Did you?