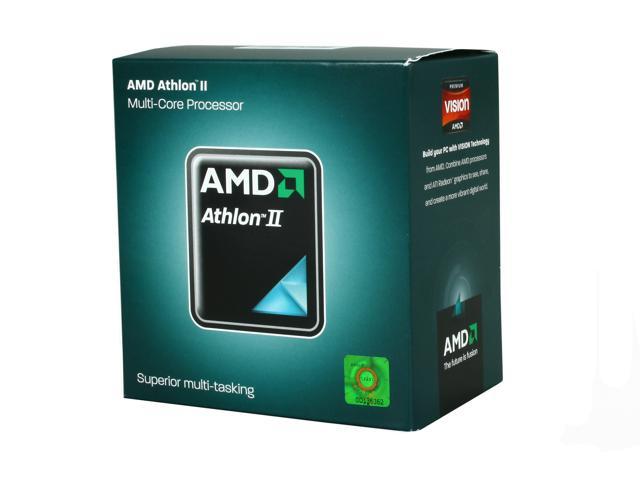 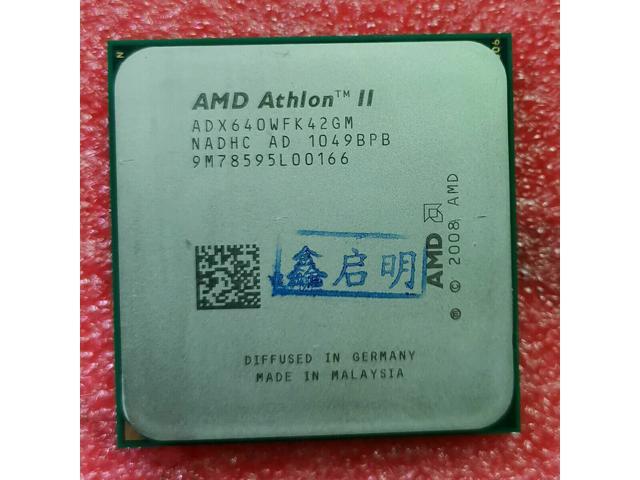 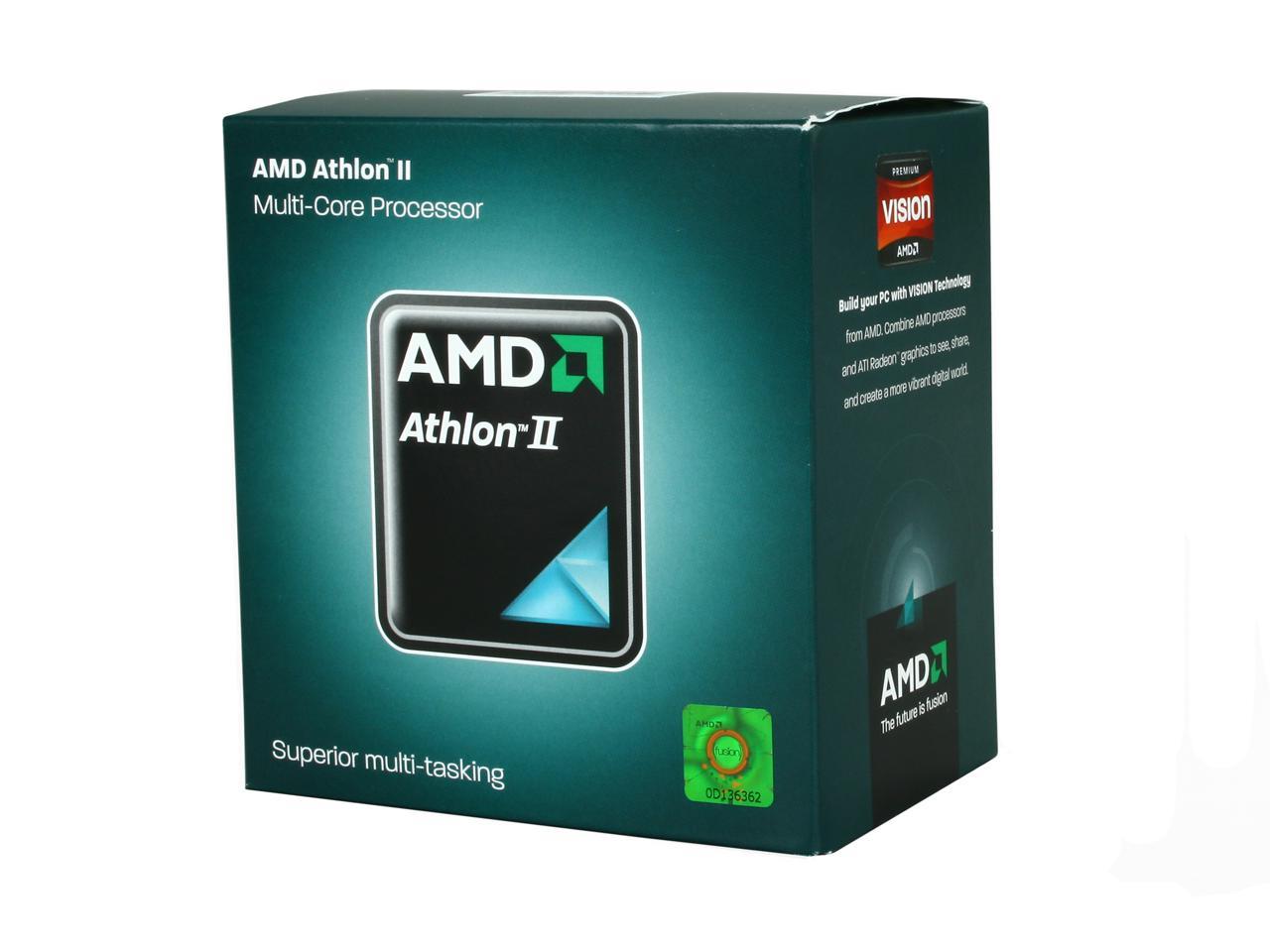 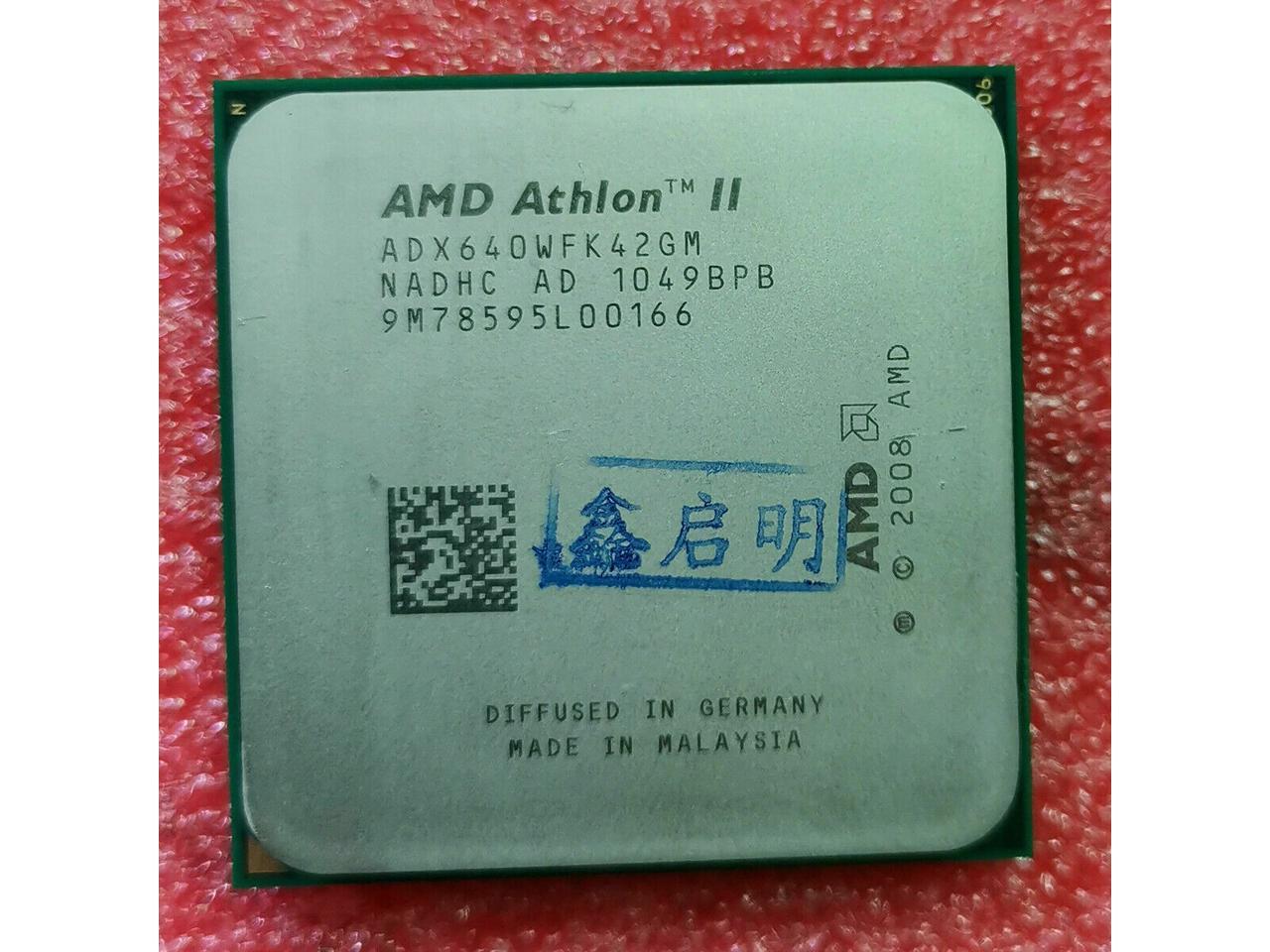 (522) Write a Review
OUT OF STOCK.
Fees for brokerage and duty included in price.
Overview
Specs
Reviews
Prepare yourself for a new personal computing experience with the Athlon II X4 640. Save time and accomplish more with multi-core processing that makes multitasking quick and simple. The Athlon II X4 features the next-generation AMD Direct Connect Architecture for a fast, responsive PC. This processor is also optimized to take advantage of the power management features in Windows 7 using AMD PowerNow! 3.0 Technology.
Energy efficiency is important to AMD, allowing you to enjoy a cool, quiet PC while saving energy and reducing heat, noise and the effect of your computer on the environment. Energy efficiency innovations include Cool’n’Quiet, AMD CoolCore and AMD Smart fetch. These technologies reduce power consumption by balancing the processor activity. You’ll experience up to 50% energy efficiency over previous AMD Athlon II processors.
AMD Athlon II processors also offer support for Virtualization Technology. You can run virtual environments on one system with ease, allowing you to use legacy programs on a separate operating system. Also providing 64-bit support, this processor can handle the most demanding programs with ease. Add the convenience and power of multi-core processing and enjoy the benefits of energy efficiency with an AMD Athlon II X4 640 today!

Pros: One of the lowest cost quad core CPUs. Decent performance running at stock, thus a good bang for the buck. Has high CPU Mark per dollar. The stock cooler is sufficient and quiet cooling under stock voltage and frequency conditions. Easily paired with inexpensive motherboard for budget builds.

Cons: Stock fan was a tad bit loud at boot but did tame down. Customer made minor complaint about it, I mitigated by removing hdd fan and encouraging sleep over shutdown.

Cons: Cpu fan was not working properly; making a very unpleasant noise (hum/buzz). Contacted AMD, very pleasant experience with them. Called AMD - Listened to a simple automated machine, 1 for gpu, 2 for cpu. Pressed 2, within 5 seconds I had a well spoken, easy to understand gent. Requested serial number, date & place of purchase. They sent out a replacement fan and it should be here within two days.

Pros: Great Upgrade CPU Performs FLAWLESSLY have it overclocked to 3.3ghz immediatly noticed the diffrence from my +6400 dual core

Cons: Like other reviews stated stock heatsink and fan is terrible, but it wasn't a problem for me since i used my old heatsync and fan from my old dual core black edition cpu. it was like 3 times the size of the one it came with.

Overall Review: stable at 3.5 but i keep it at 3.3 due to running prime temp is 55c at the higher clock. I have an old asus M2N-sli deluxe asus mobo and anyone upgrading from an older motherboard will have to flash the bios but is very simple with ezflash2 that asus has Athlon II X4 640 3.3 Asus M2N-SLIdeluxe 8gigs Mushkin ddr2 800 x2 GTS 640mb SSC graphics cards (sli) x2 1tb segate hdd 7200rpm vista x64 Home Premium WEI 5.9 on all of them but vista only goes to 5.9 so couldnt tell you what it would be on windows 7

Pros: This CPU is rated one of the best "bang for the buck" on the CPU Benchmark site. It scores a 7.3 WEI on my new system build. It runs cool and it's fairly efficient at 95 watts.

Cons: None at all.

Overall Review: I'm using it for an audio/video streaming server that I've custom built (all with parts from Newegg). Not a single drop in frame rate or any glitches noticed in the past 3 months.

Overall Review: This is my second review after having run this CPU for almost 3 months now. Contrary to what the others are saying here, I am finding that the stock cooler is totally adequate for most gaming and number crunching uses that 99% of users will run into. I have a HTPC case which doesn't have room for an oversize CPU cooler so I needed to use the stock cooler. I am using CPUID HWMonitor to measure temperatures. I have run 4 simultaneous threads of Prime95, and with the stock cooler it gets up to 50C. With every game that I have run so far, it never gets above 40C. The one think I did do was remove the stock thermal grease and use a *thin* bead of Arctic Silver. Other than that, it is totally stock. The long and short of it is that this CPU runs cool and the stock heatsink is totally adequate. I stick to my 5 egg rating.

Cons: The stock cooler is cheesy, My previous build had a 6400 X2, that heatsink was beastly and had copper

Pros: This is a great quadcore processor for the price and speed. I'm an AMD fanboy and have been building computers with them for many many years. I used this CPU to upgrade my video security machine. I'm running 6 cameras with blueiris, 3 or more minecraft servers, and sometimes a minecraft client. It runs it all w/o a hiccup.

Cons: This is a personal preference but i would rather the heat sink not have thermal paste pre-applied as this one does, that way i can put the arctic silver on without having to clean the sink off. This is nothing worth taking off an egg, though.