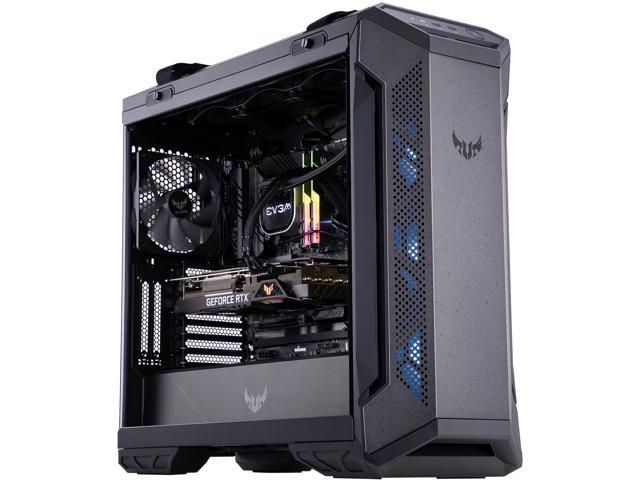 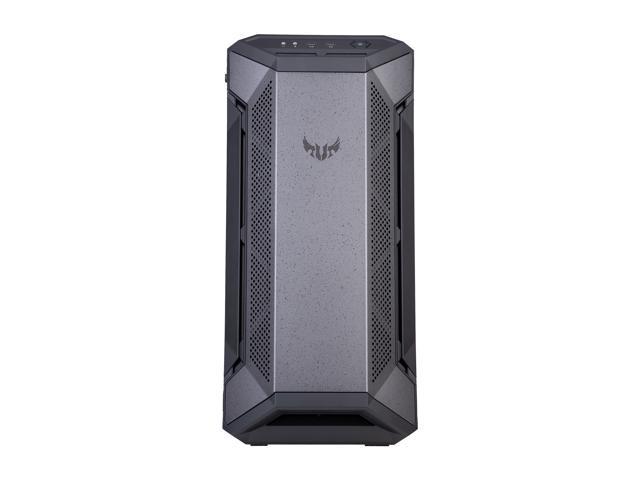 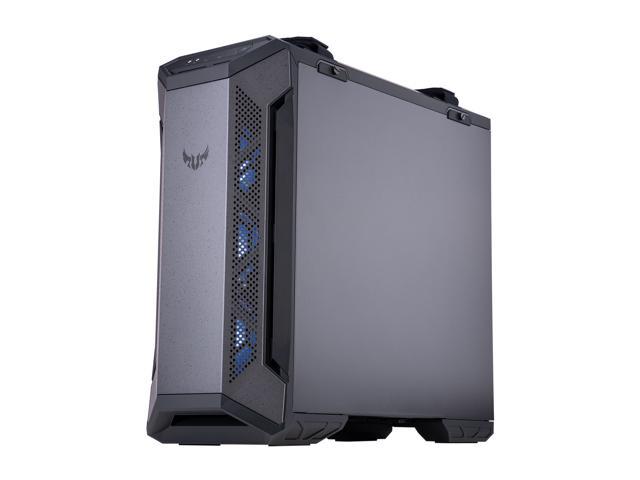 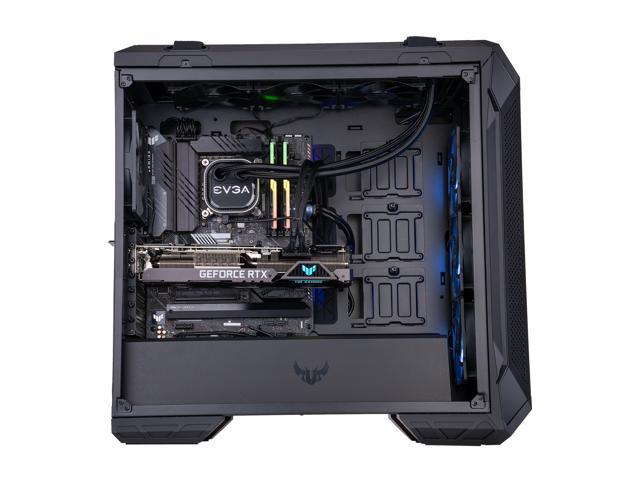 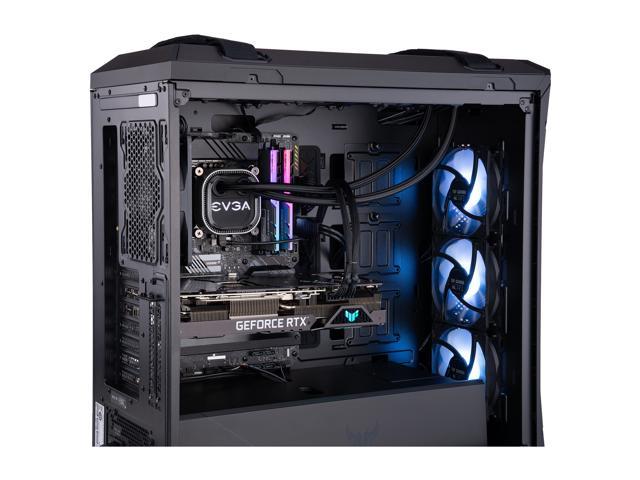 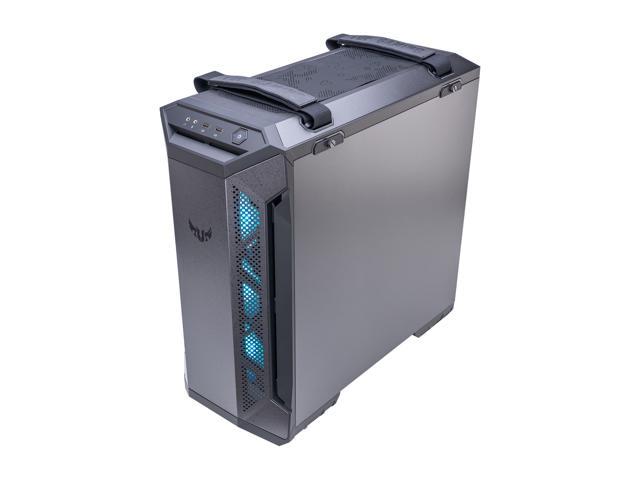 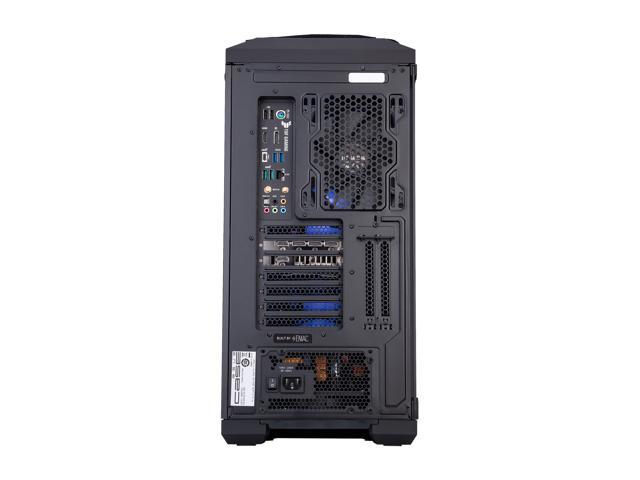 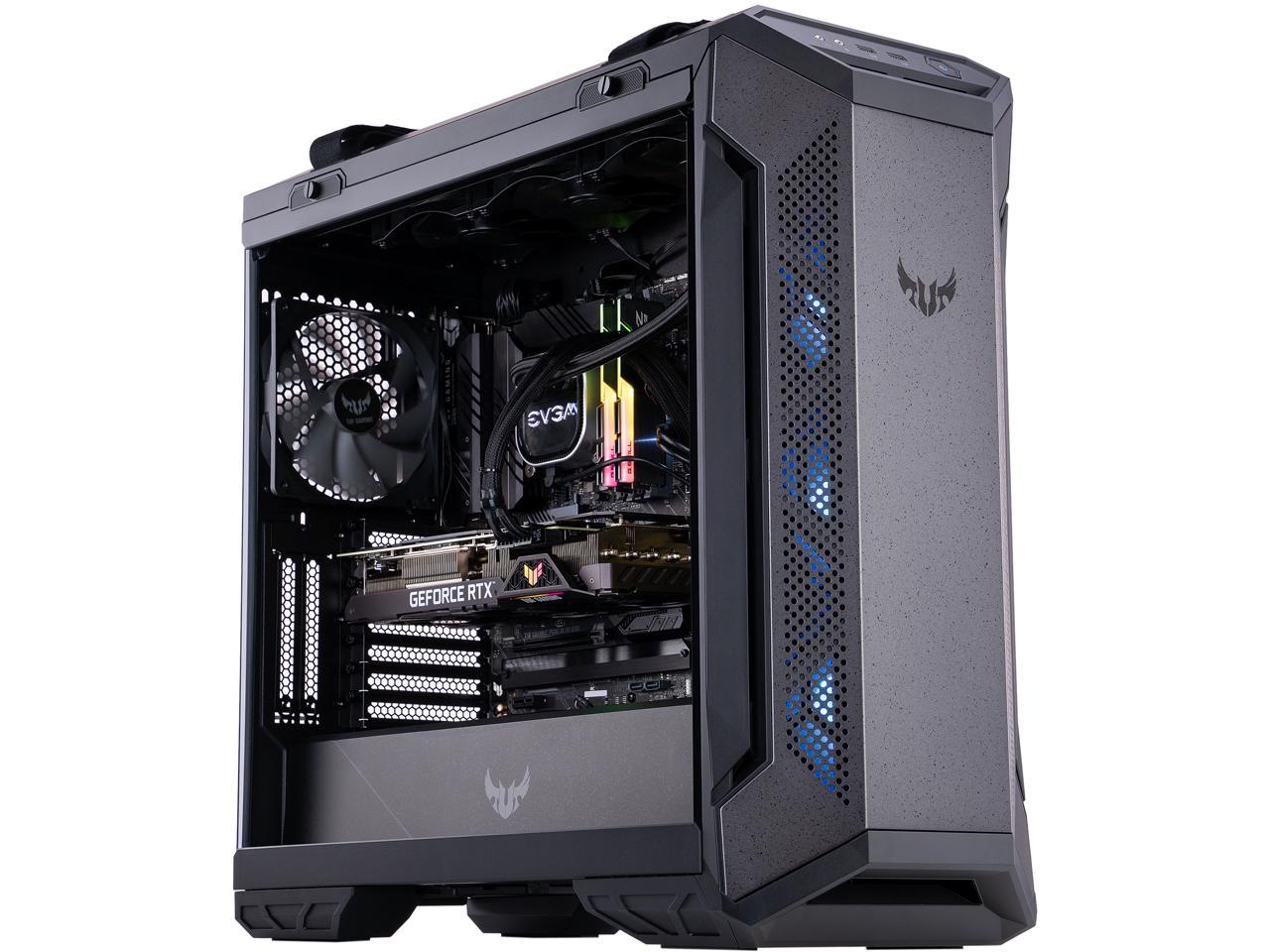 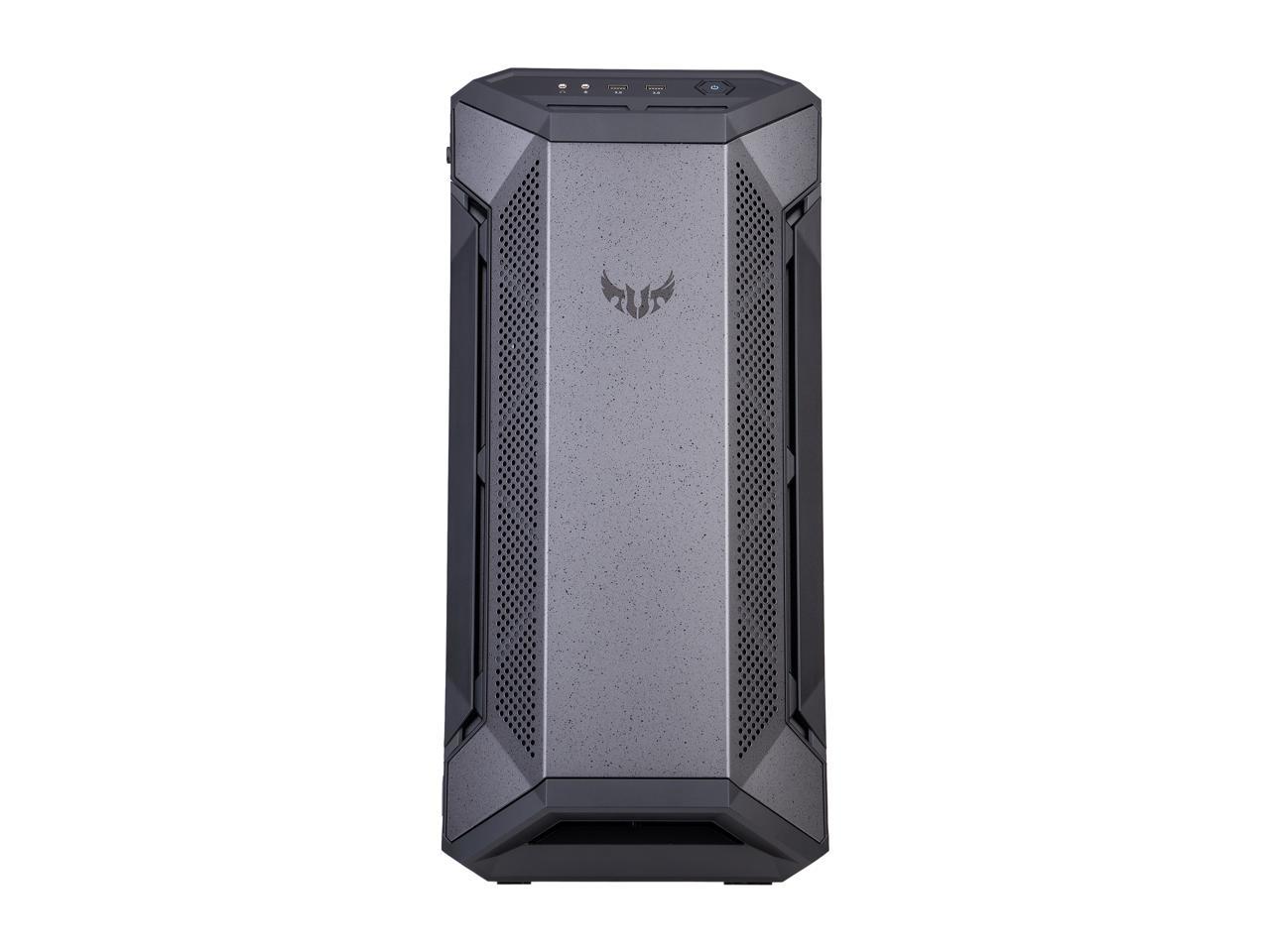 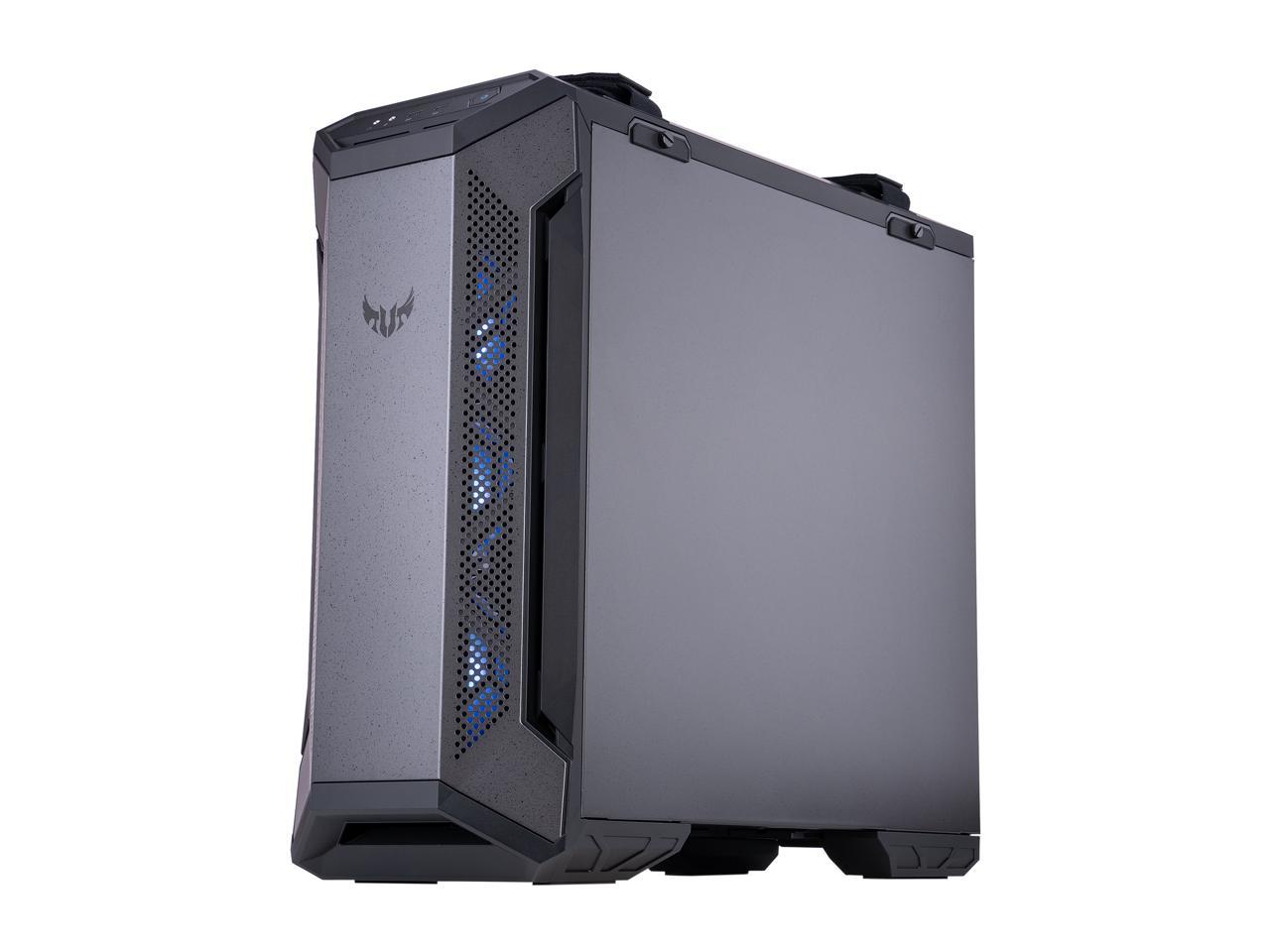 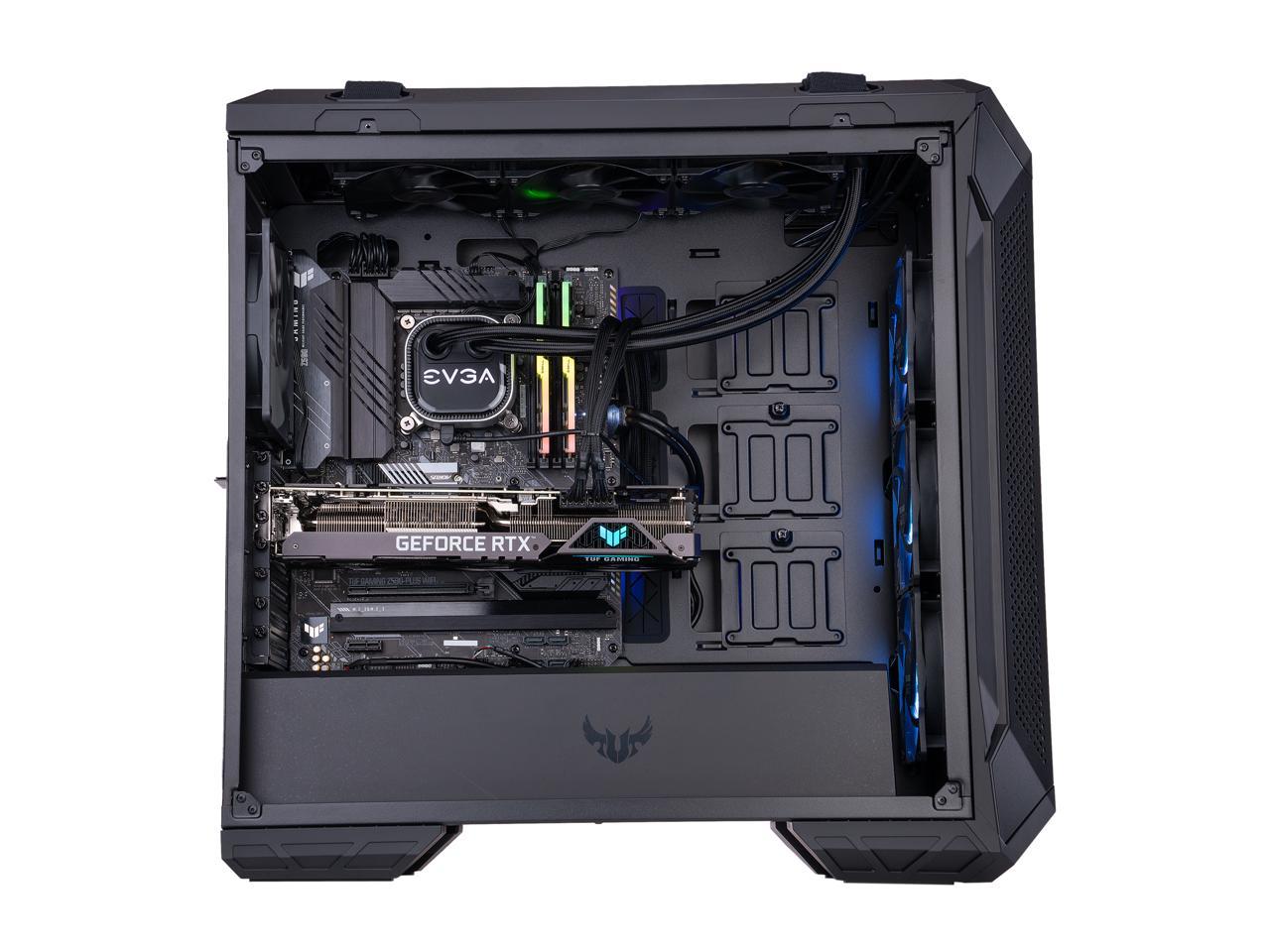 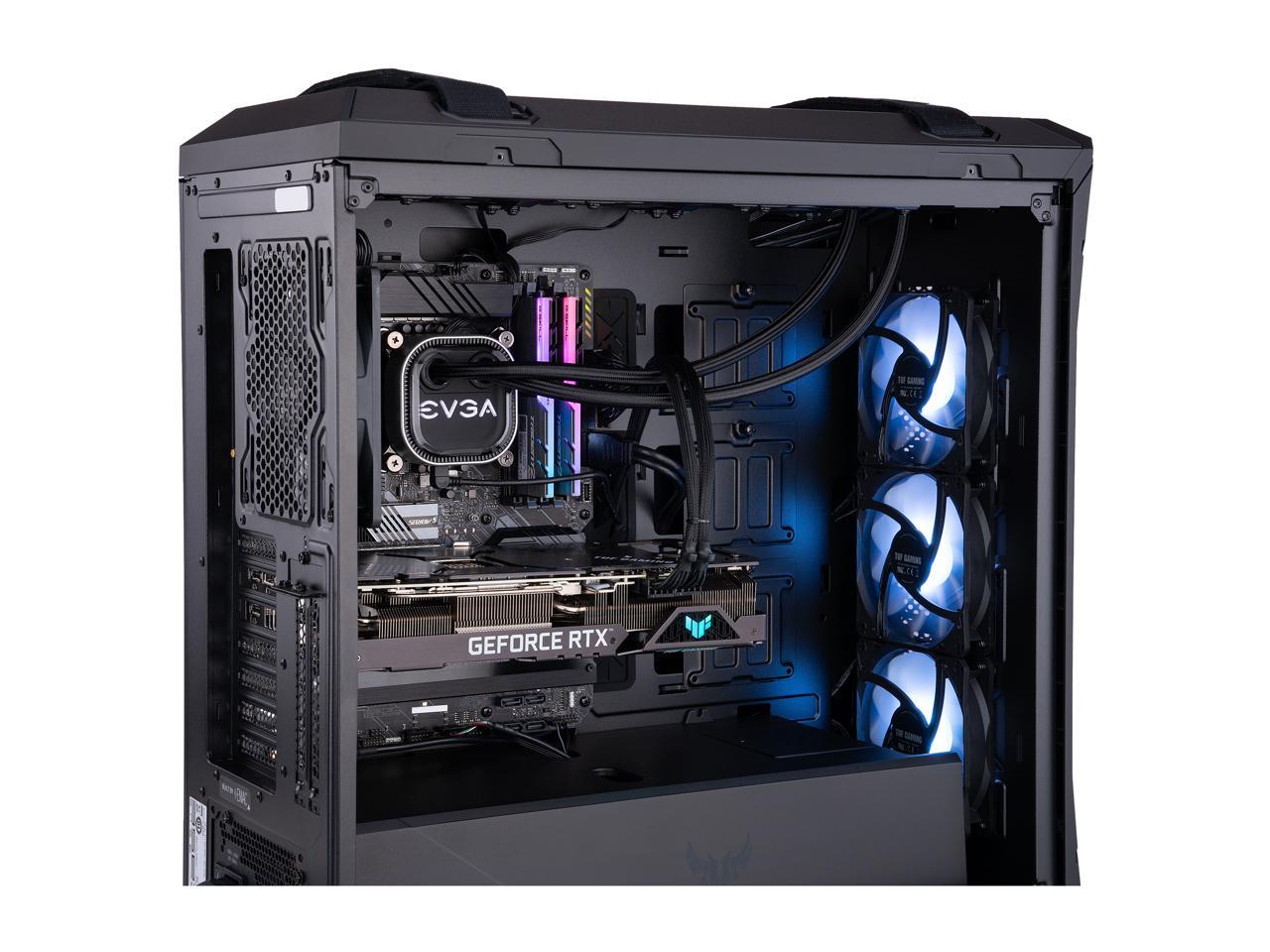 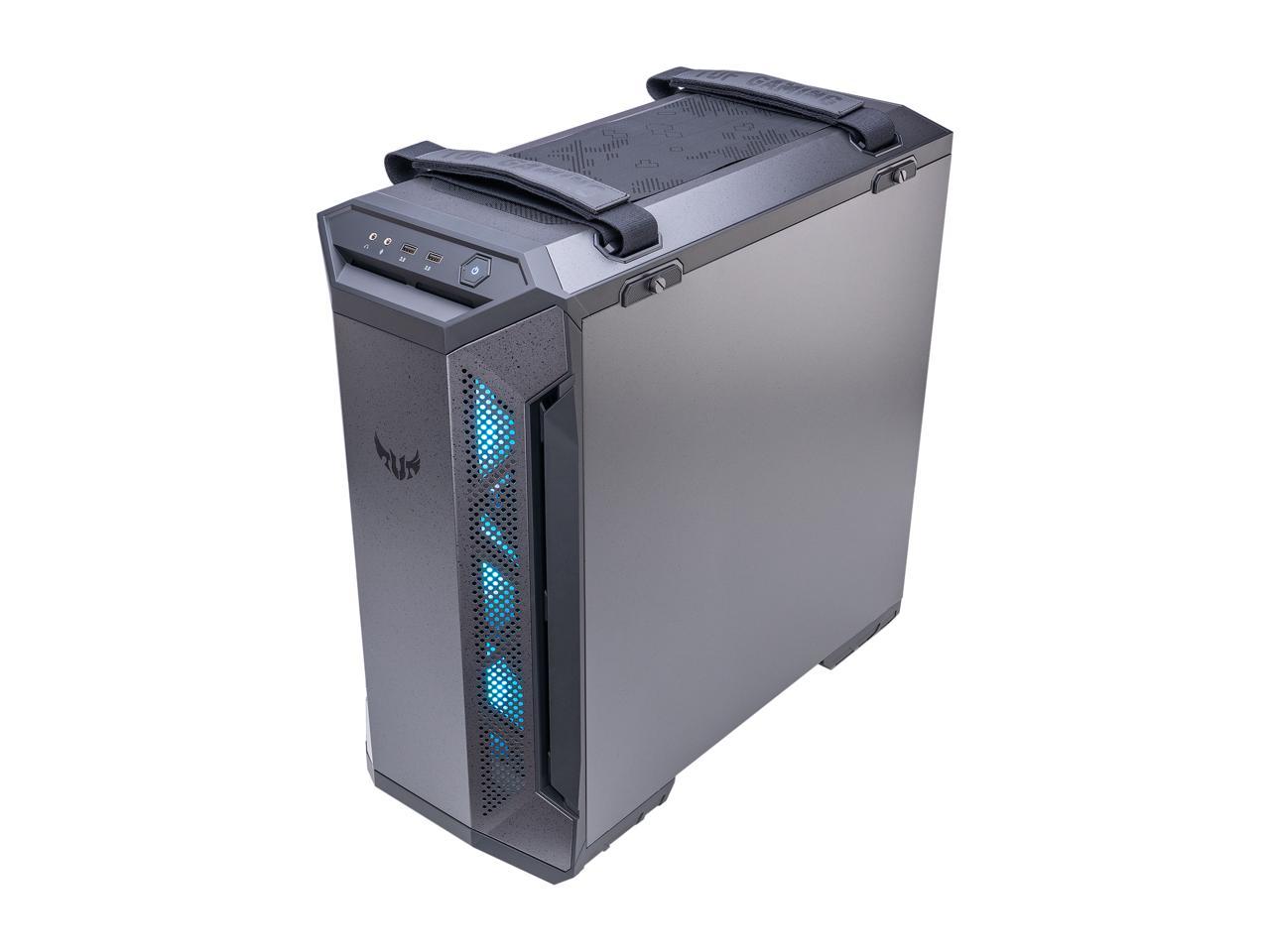 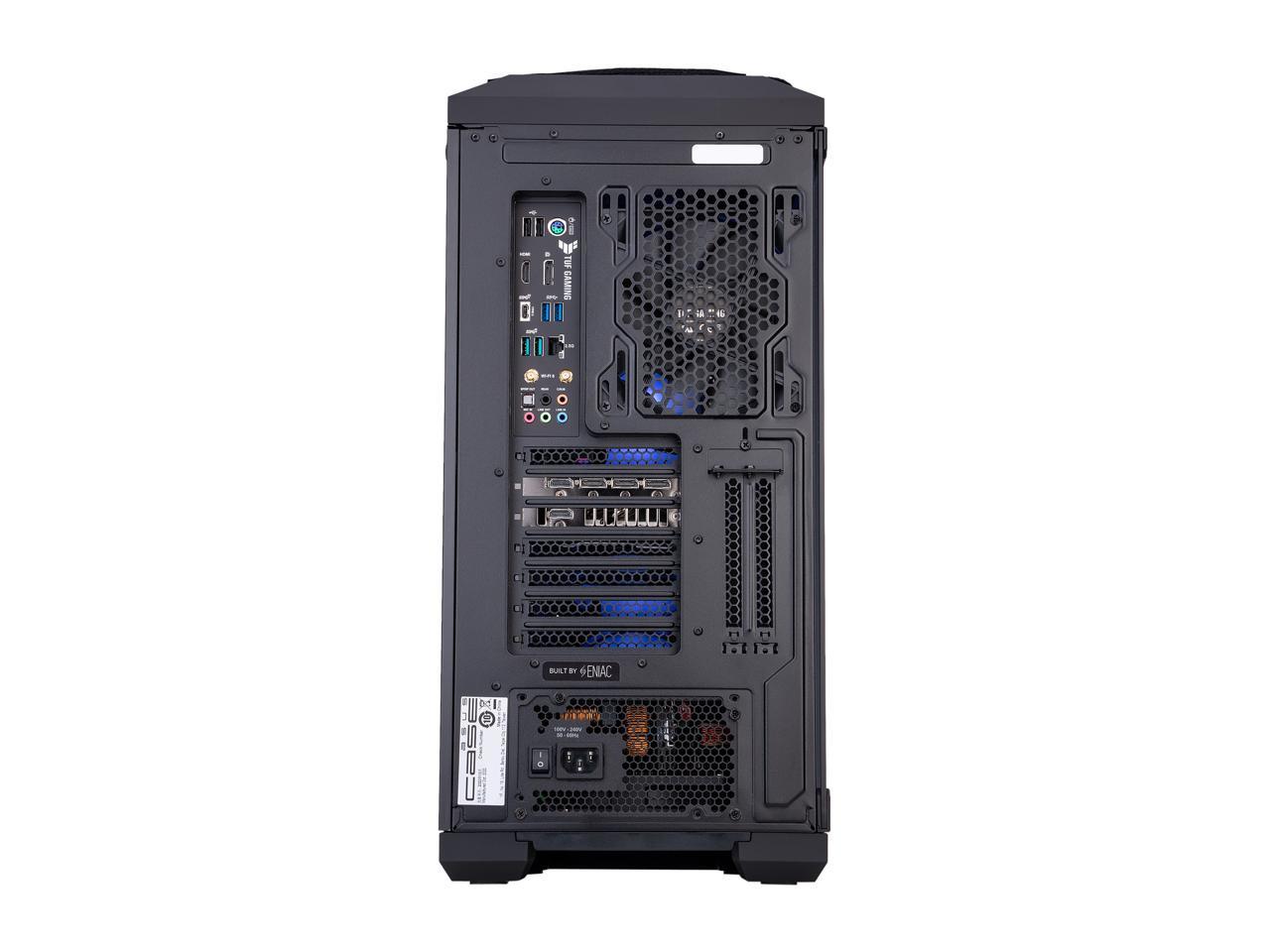 A formidable performance beast that powers through everything from 4K and VR gaming to engineering and designing tasks. All parts are sourced from top brands including Asus, Gigabyte, G.Skill and EVGA, and are neatly and cleanly housed in a gaming-oriented mid tower case.

A new generation of Intel Core processor offers awe-inspiring performance with up to 8 cores (16 threads) and 5.00 GHz Max Turbo Frequency, so you can play, record and stream simultaneously with high FPS and effortlessly switch to heavy multitasking workloads.

The TUF GAMING GeForce RTX 3080 Ti has been stripped down and built back up to provide more robust power and cooling. A new all-metal shroud houses three powerful axial-tech fans that utilize durable dual ball fan bearings. Fan rotation has been optimized for reduced turbulence, and a stop mode brings all three fans to a halt at low temps. Beneath, independent heatsinks for the GPU and memory keep thermals under tight control. Additional features, including TUF components, Auto-Extreme Technology, a new GPU bracket, and a backplate vent make the TUF a proper powerhouse. For builders looking for a new “old faithful”, this card has your back.

Successor to the EVGA SuperNOVA G1, one of the longest-lasting and best-performing power supplies on the market, the SuperNOVA G+ is the new and improved fully-modular power supply lineup from EVGA with an 80+ Gold efficiency rating. It features 100% Japanese capacitors, tight voltage regulation (<1%), efficient and quiet 135mm fluid dynamic bearing fan, plus a suite of protection design to safeguard your components and system.

Learn more about the ABS ALI562

Overall Review: Overall I'm happy with my purchase since I have a 3070 Ti now but there were some overheating issues due to the CPU cooler fans being mounted backwards. After playing some CPU intensive games I was getting Iockups due to overheating and noticed even when it didn't lock up it was taking a long time for the CPU to cool down. Extremely hot air was blowing out of the top of the case where the radiator was mounted. I reversed the fans so they drew cool air from outside the case instead of blowing hot air from inside the case to cool the radiator and problem solved. This is the recommended configuration even in the manual for the CPU Cooler. The system runs fine now so 4 Stars, -1 star for me having to fix their error.

Overall Review: Like a lot of you I used to build my own systems, but in this market I gave up and went with this prebuilt. Have to say I'm pleasantly surprised, the only major problem was the noise level of the CLC fans. Honestly sounded like someone was using a lawnmower in the next room. Thankfully I had a pair of beQuiet! Silent Wings to replace them, and now it's cool and quiet. I might upgrade some other components later but so far it is performing really well. I just miss being able to pick and choose everything myself.

3 out of 3 people found this review helpful. Did you?
Manufacturer Response:
Dear Shaun, Thank you very much for supporting ABS Computers. We appreciate you taking the time to provide your feedback! We strive to make our products better, so I have forwarded your concerns to our assembly team! We would like to replace the liquid cooler in your system for you. Please contact us at (800) 685-3471 or email your information to customercare@abs.com so we can begin to fix the issue for you. Thank you again for considering ABS products, we look forward to resolving your concerns! ABS Technical Support
Anonymous
Ownership: 1 day to 1 week
Verified Owner
So far - No Complaints8/6/2021 10:44:19 AM

Pros: Everything arrived as promised with all promised components. After removing the packing & checking connections I plugged everything in and fired it up. Worked perfectly. I did have to activate Windows which was very easy with the step by step directions. Then went into the BIOS and enabled the XMP. Again, very easy.

Cons: The only thing I would mention would be to spend another $20 & buy a brace for the graphics card. Cheap insurance for an expensive GPU.

Overall Review: Given the way things are going at the moment I would not hesitate to do this again. Very satisfied. If anything changes I will let you all know....

3 out of 3 people found this review helpful. Did you?
Manufacturer Response:
Hi, Thank you very much for supporting ABS, we appreciate you taking the time to provide your feedback. If you have any suggestions or concerns please write us as well! We strive to make our products better. If you have any questions about your product please feel free to contact customercare@abs.com or call us at (800)685-3471. We will be glad to answer all your questions in a timely manner. Thank you again, ABS Customer Support
Tdog
Ownership: 1 week to 1 month
Verified Owner
Impressed!10/11/2021 10:03:29 AM

Overall Review: Decided on this build after purchasing (and returning) a pre-built from cyber power PC. This build is much better and well put together. Everything came in tact and exactly as Id hoped. Ive ran it a few hours a day every day since Ive got it, and so far its excellent. Impressed with ABS!

Cons: They gave me an i5, a RTX 3060 Ti FTW, an 80 plus bronze power supply, and even the included keyboard and mouse are wrong. The entire PC.

Overall Review: I would NOT recommend this to anyone.

Pros: Fantastic build with some good components, due to how hard it is to find a 3080ti I had to settle with a pre-built. But Newegg did a great job with this. Cable management was on point, very clean. It would have been nice for them to throw in some braided cables + comb combo though considering the price tag. Plugged it in and had no issues getting it up and running. No bloatware installed, and XMP was already enabled.

Cons: Packaging could have been better, there was no FRAGILE markings on the box so I'm lucky no one tossed it around during transit. I also found a mysterious piece of plastic rattling around inside the case. It was about the size of a quarter with 2 metal strips on the side of it. I have no idea where it came from, so I can only assume it fell in during the building process. I would attach a picture of it but it seems I lost it somewhere, if I find it ill edit this with a picture. There were 2 stickers left inside on some components, a plastic film on the CPU cooler and a paper sticker on the M.2 mobo heatsink.

Overall Review: It's a great buy if you can find this on sale. But for the normal price I wouldn't recommend it as you can find other pre-builts for cheaper with the same performance. Overall I'm very satisfied with it.

Did you find this review helpful?
Anonymous
Ownership: 1 week to 1 month
Verified Owner
Great desktop computer. Allows me to run virtually any game I want without a problem. The 3070 TI is an absolute beast and looks sleek. Love the design. 10/10 recommend9/23/2021 1:29:25 PM

Did you find this review helpful?
Manufacturer Response:
Dear Anonymous, Thank you very much for supporting ABS Computers. We appreciate you taking the time to provide your feedback. We strive to make our products better. If you have any questions about your product, please feel free to contact customercare@abs.com or call us at (800) 685-3471. We will be glad to answer all your questions in a timely manner. Thank you again, ABS Customer Support
Dustin W.
Ownership: 1 day to 1 week
Verified Owner
Good performance despite the components other than the GPU being pretty basic9/18/2021 1:14:17 AM

Pros: All the components were actually pretty well known brands, nothing was an ABS brand component like some other prebuilt companies. Performed well despite the components other than the GPU being a step or two down from what is currently out. PC actually came with the EVGA FT3 3070 TI which I wasn't sure if they would just slap any 3070 TI in there. The deepcool case seems HUGE for a mid tower and you could easily add a front 360mm AIO or an ATX motherboard instead of micro ATX.

Cons: One of the front fans was not working and I had to tear it open to find the wire that was never connected properly. Could have use a CPU cooler with RGB fans to add more RGB to the inside for the RGB lovers.

Overall Review: You could build a pc yourself with slightly better components but if you are looking for something that is going to run your games and come with an awesome GPU this is a decent price point for what's inside.